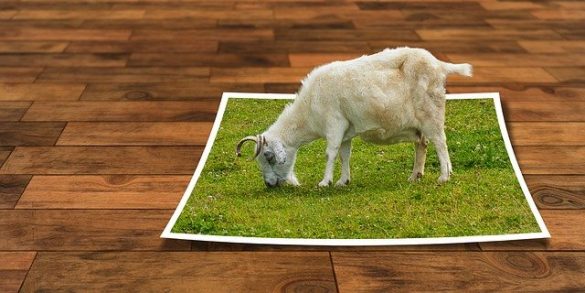 Google is trying out a new feature that automatically detects photos in Google Photos and gives them a 3D touch with just a tap. Although you can enable/disable it from advance settings in the Google Photos app, it still hasn’t rolled out yet. So rather than waiting, let’s invest our time and creativity by using other 3rd party apps that already lets you do that. Although, the market for this genre of apps is still developing, there are a few apps I tested that are worth trying. Without wasting any more time, here are the best 3D photo apps for Android.

Probably one of the most used 3D image creator apps on the Play Store right now. LucidPix not only lets you use your phone’s camera to take 3D pictures, but you can also easily transform existing images from your gallery. There are other photo editing features that come in handy such as multiple filters, the option to add text, modify colors, etc.

The app does a great job of giving a 3D touch to your images but I still found instances where the images were transformed into a stretched version of the original image.

The app adds a watermark which you can remove by subscribing to the super user version for under $1.

Note: This app uploads the pictures to its servers in order to process them

Unlike the previous app which gave you a bit of popping effect and tilt in the pictures, this one gives you more moving room and hence a better 3D image. This not only enhances the depth of the photo but captures space which allows you to move the image by swiping on the screen to view it from different angles.

Fyuse is not only a photo app but has a social media platform built-in. This allows you to add a photo description and create a photo timeline where others can like and comment.

What I personally like about this app is that it is free and you have tons of help and tutorials to get you started with any type of picture you want to take. Whether it’s a selfie, pets, real estate, or any other genre. The uber 3D photo app for Android requires you to sign in using your Google, Facebook, or email ID. So if you were planning to use this as a guest, you’re surely going to be disappointed.

3D Effect doesn’t make conventional 3D photos like other 3D photo apps we saw above. However, if you’ve ever watched a 3D movie or read a book with 3D images, I’m sure are aware of 3D glasses. Similar to those movies/books which needs glasses with a tint of different colors, this app lets you transform normal images or capture pictures with that effect.

Remember, you would only be able to make full use of this app if you’ve 3D glasses

It has an inbuilt editor as well. With this, you can adjust the 3D effect’s direction, select color mix, etc. The app applies a watermark which you can remove by paying $2.

Not to be left behind, Facebook also introduced a 3D image capture feature in the Facebook app. Similar to the LucidPix, you have the option to take a picture and also create a 3D effect on the images from your gallery. You can do this by going to your news feed. If you’re an admin or editor of a Facebook page, you can try this feature out as well.

To begin, select ‘What’s on your mind? at the top of your news feed and click on photo/video at the bottom from the content options.

That will open the gallery window. You can either select a photo from your gallery and hit next or you can also click on the camera icon on the top right corner to capture a new image.

After that, it’ll be automatically loaded and shown in the next window. You’ll find a Make 3D icon at the top of the photo, simply tap on that.

The photo will take a few seconds to process depending on your connection. When done, move your phone around to glimpse the 3D photo and hit the Post button to post it on your feed. You can also remove the 3D effect by selecting remove 3D before posting the picture. No need to download a separate 3D photo apps on your Android.

While plenty of 3D photo apps for Android deal with transforming a picture into moveable 3D images, Zoetropic puts your pictures in motion instead. Confused? Consider it a blend of 3D and stills in motion.

For example, take a static image of a waterfall. With this app, you can set motion points which essentially gives the look of the water actually flowing. Moreover, if you don’t want other parts of the image to move, there’s an option to stabilize the rest of the area as well.

You can add more spice by using the soundtracks in the audio library or add fancy overlays. You must keep in mind that the final version with all the motion effect will be a video file.

Get Zoetropic – Photo in motion

This wallpaper app lets you replace your boring 2D or even live wallpapers with 3D. It uses your phone’s gyroscope to detect movement and moves the wallpaper accordingly. Unlike other wallpaper apps I tried which are filled with low-quality content, you’ll find animated, genre-specific, made for AMOLED screens wallpapers, and much more in the database.

The app comes at a cost of $1.75/month. This plan unlocks all live wallpapers and removes ads. If you simply want to try it out, there are plenty of good wallpapers you can check out for free.

So here were a few apps that let you create a 3D photo from any picture or makes use of your phone’s camera to capture and convert them into 3D images. If your end goal is to share it with your friends, there is nothing better than using Facebook’s native 3D image option. If not that, you can try out LucidPics for static images or Zoetropic to add motion to a certain part of any image.