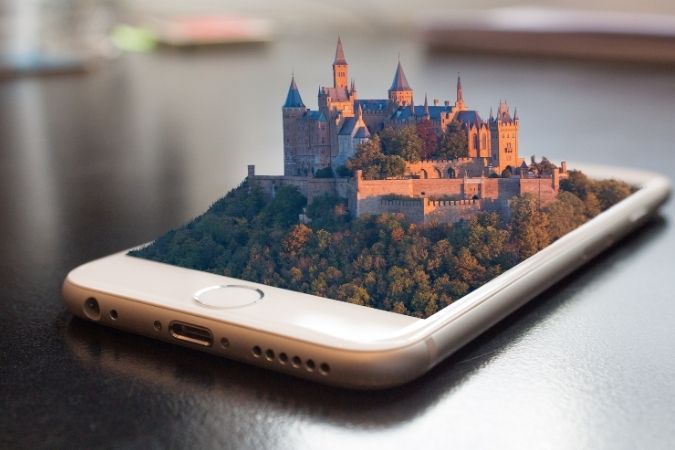 We’ve already talked about various 3D photo apps that you can find on Android, but what options do you have if you are an iOS user? Well, there aren’t many, so it’s quite easy to confuse the good ones with the bad. I’m assuming you don’t want to waste time on download and trial yourself. Here are some of the best 3D photo apps for iPhone that I tried and found worth mentioning. Let’s begin.

Fyuse will take your 3D photo game up a notch with its help and tutorial section. With its large genre of tutorials, you can brush up on your selfie skills, real estate photography, pet pictures, etc quickly. It becomes very easy for any beginner to follow these tips and make better use of the app. Unlike most 3D photo apps for iOS, rather than enhancing just the depth of the pictures, you also get more space horizontally. This makes it easy for you to swipe the image to view it from different angles.

Fyuse 3D Photos is free but requires you to sign in using your Google, Facebook, or your e-mail ID.

Use Parallax if you’re always in a hurry to capture photos. As soon as you install and open the app, you get multiple options like editing, turn a photo into 3D, capture a 3D photo, and so on. You can either transform pictures quickly or capture images yourself that gives you more flexibility with angles. It also comes with capture modes like short, classic, and smooth which allow you to adjust the number of shots in one image. Whichever method you use, you can add filters and effects with the inbuilt editor.

The app costs $4.49/monthly and comes with a 3-day free trial. You also get a lifetime subscription option which will set you back by $37.99.

If you’re looking for a social media touch that lets you connect with and like 3D images posted by other users, you are likely to enjoy LucidPix. You can not only take pictures using your iPhone but also a 3D look at existing images in the Gallery app. The popular 3D photo app for iPhones has various inbuilt editing tools, photo filters, an option to add text, and more. A major downside that might make you reconsider is that you get a watermark that can only be removed by upgrading to a superuser version for under $1.

The app does a great job is giving a 3D touch to your images but I still found instances where the images were transformed into a stretched version of the original image.

You can check this in-depth guide if you want to read more about LucidPix and how to convert images to 3D on your Android or iOS device. It is available on both platforms.

Note: This app uploads the images to its servers in order to process them

Even though you can do most of the things with other 3D photo apps, I added PopPic to the list for its filters. There are many filters in the pro version which are great but locked behind a pay-wall. So for anyone who is willing to upgrade, effects like clone, kaleidoscope, and pixelate among other effects are worth checking out.

The pro version of the app comes at $0.99/month with a 7-day trial period. The lifetime plan is cheaper and will cost just $7.99.

Loopsie is a 3D photo app that allows you to add 3D stickers or virtual objects to your pictures. On top of that, you can join the 3D photo bandwagon of Loopsie users by using the hashtag #loopsie in your posts. As you might have already noticed the aesthetic in the title, you’ll find various looks that include vintage, 1950s look, overexposed, money rain, earth color palette, reflections, etc. I tried a few and the processing was perfect for all the pictures.

If you want to remove the watermark, the app also has a pro version which will cost you $5.99/month or $59.99 for a lifetime license.

Since most of us are spending more time on Instagram, you might have missed this Facebook feature. Similar to the 3D photo apps for iPhone listed above, you can actually create a 3D picture from images from your gallery. This feature will also work if you’re an editor or admin of the page. Follow the steps below to take your own 3D photo on Facebook.

To begin, select ‘What’s on your mind? at the top of your news feed and click on photo/video at the bottom from the content options.

This will open the gallery window. You can either select a photo from your gallery and hit next or you can also click on the camera icon on the top right corner to capture your own image.

After you do that, it’ll be automatically loaded and shown in the next window. You’ll find a Make 3D icon at the top of the photo, simply tap on that.

The video will take a few seconds to process depending on your connection. That’s it. When done, move your phone around to take a glimpse of the 3D photo and hit Add to your post to post it on your feed. You can also remove it by selecting remove 3D before posting the picture.

Converting any photo to 3D is fun but what if you want to create a 3D movement effect in stills? For example, you want to create a cloud, water movement in a picture where you’re static. A conventional 3D photo app for iPhone will fail miserably as it won’t be able to create the continuous effect that we want. For that, StoryZ will come into play. You can make your picture go live by simply making a gesture on the image to create a ripple effect.

The best part about this app is that it allows you to add overlays, backdrops, effects, audio, and even more. Although free, you can upgrade the app to the premium version for a monthly bill of $3.99. The upgrade removes ads and also lets you add up to 4 overlays.

So here were the best 3D photo apps for iOS in 2021. If you use Facebook more, contrary to what I’ve stated above, try using the native 3D photo feature in the Facebook app. The quality is on the better side and you can also post it straight away on social media. Lastly, StoryZ photo motion is another great option to add movement in any still with moving objects like water or clouds.