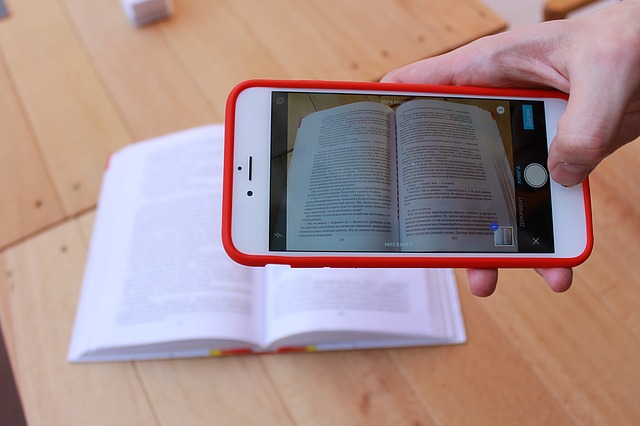 Using your smartphone camera to scan documents isn’t anything new. Earlier we saw some of the best Android scanner apps to scan QR codes and visiting cards. And as you have guessed it from the title, next in the line is – best OCR apps for Android.

While there is no shortage of OCR apps for Android on Google Play Store, finding the right one for you might take some time. Fret not, we tested several Android scanner apps, some of them for specifically for converting images of handwritten notes to text while others that can do much more, and see which one is suitable for which of your needs. Let’s begin.

Office Lens is an app by Microsoft which means you already know it will come tightly integrated with the office suite of apps. If you don’t use Office 365 or are not a big fan of it, there are other options I will discuss below.

Yes, Office Lens comes with a powerful OCR scanner but it will work with only OneNote, Docs, Excel, Powerpoint or PDF.

Note: OneNote app also comes with OCR tech built-in but use Office Lens if you want to edit the text in Word or other Office apps. 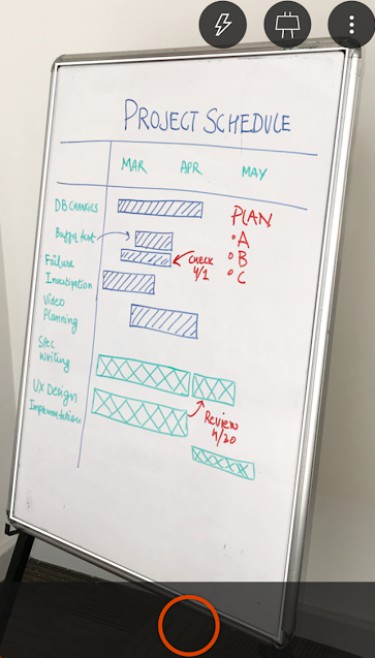 Office lens offers different adjustments for scanning whiteboards, print paper, business cards, and photos which it handles by adjusting brightness and contrast to remove the glare.

Pros: You can save everything in OneDrive and edit the converted text in OneNote or Word. A must-have for Office 365 users. Works amazingly well and easy to use. There are no ads.

Cons: If you don’t use Office 365, try something else. The app is free but MS Suite is not.

Verdict: I would only recommend Office Lens to 365 users. You can’t go wrong with this app if that’s the case. Easy to scan, store, and search for everything in the cloud.

Text Fairy, one of the best OCR reader apps, does one thing and it does it really well. The popular OCR app is free to use and comes with no ads whatsoever. One thing that Office Lens lacked was the ability to correct viewpoint. Say, you are scanning a book and the pages are bent near the center, the app will scan and take an image and correct it automatically.

This improves the scanning accuracy. You can edit the extracted text and export it in PDF format. Unlike Office Lens, it only works with printed text, there is no handwriting support. On the plus side, it supports more than 50 languages. 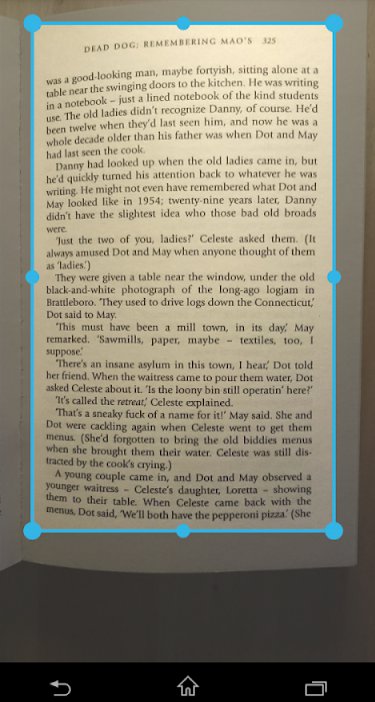 Read: Take a Picture of Handwriting And Convert to Text – Android Apps

Pros: Supports many languages, autocorrects viewpoint, and export to PDF. No ads and completely free. There is text to voice feature.

Cons: No handwriting support, no cloud or third-party app support.

Verdict: Text Fairy is easy to use the app with a clean UI and minimalist design. Good for when you don’t need to scan, organize, search too many documents. Otherwise, cloud support would be better. It is good for occasional work.

The OCR features in CamScanner only comes with the pro version, for a one time fee of $1.99. After scanning some handwritten notes, I saw the app made some mistakes. Accuracy was lower than expected and not comparable to the likes of Office Lens or Text Fairy.

Also, you cannot edit the scanned text in a .txt file. That feature is available in the Premium version which will cost you $4.99/month.

Also Read: CamScanner vs. Adobe Scan vs. Office Lens – Which One to Use and Why 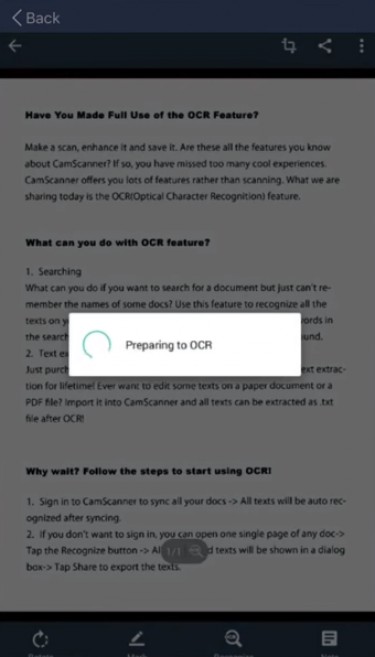 Pros: It comes with a cloud storage account so you can store everything there. Support is great and app UI is good to look at.

Cons: OCR is slightly less accurate than other apps and there is no way to edit the document without subscribing to the premium plan which is expensive if you use it just for OCR.

Verdict: If you are already invested in CamScanner ecosystem then it makes sense to upgrade with one purchase and get its OCR feature. With this, you’ll be easily able to store everything in the cloud.

Google Keep is a strong OneNote and Evernote competitor with a lot of note-taking and storing features. One of them is OCR. Being a Google app, it integrates with Calendar, Docs, and other Google services. The app is free and ad-free, as all things Google are.

The way it works is a little different because Keep is a minimalist note-taking app. You scan an image with text and then tap on the three dots on the right of the screen to “grab the text” in the image. 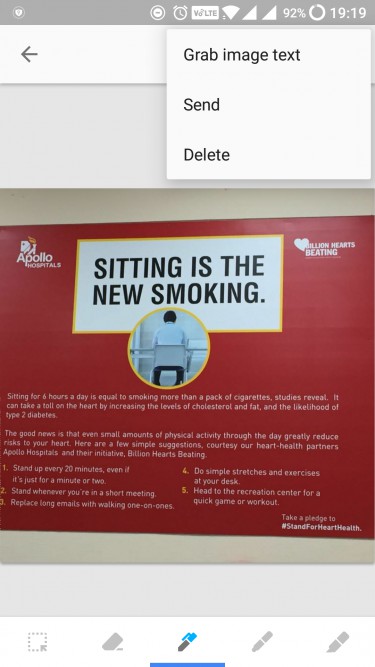 You can then add the text to the same note which will be editable and searchable. You can also export it to Google Docs. During my test, the app worked exactly as advertised and there were no errors like in CamScanner.

Pros: The app is free and syncs with other Google products. Accuracy is good.

Cons: Since Google Keep is not a stand-alone OCR app, you’ll have to manually copy-paste the item into a new document. To overcome this issue, you can scan documents using the Google Drive on your Android or even use Google Googles app as it scans text and then you can copy it on the clipboard. Since all of them uses Google cloud server for OCR, the result should be pretty much the same.

Verdict: Google Keep is one of the best OCR scanner apps for Android because it has everything you need including cloud storage and cross-platform compatibility and sync for free. It is more useful if you need a kick-ass note app.

PDF Scanner is a document scanner that comes with some in-app purchases for additional features, but the OCR tech is completely free to use. You can easily scan the image for text and convert it into PDF. It lets you edit the text before saving it.

The app supports more than 100 languages in OCR and you don’t need an Internet connection to make it work. Other features include signature, converter, and scanner.

The OCR works okay but there are too many ads in the free version which slightly irked me. Otherwise, all was good. 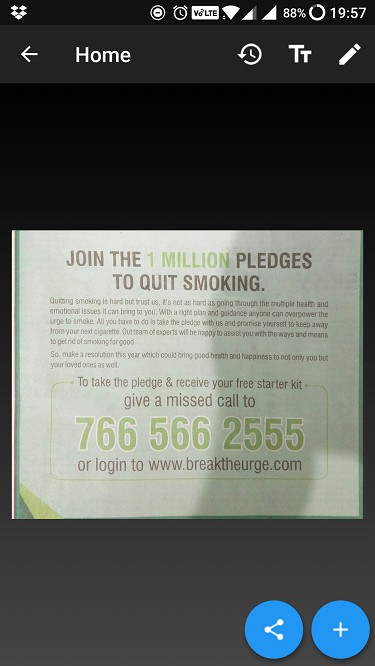 Pros: OCR works as advertised with some errors, supports 100+ languages.

Cons: Too many ads ruined the experience.

Verdict: PDF Scanner is a robust app that offers a free OCR scanner. If the ads are annoying, you can upgrade for $2.99 to remove them.

Adobe is a known entity when it comes to document management apps, so it comes as no surprise that they have a scanning app too. Point the camera and the app will automatically detect and scan it. With the OCR tech, you can scan for text inside documents. It has a built-in editor so you can annotate, highlight, and comment on text in the scanned documents on the fly. Adobe Scan is a time saver. 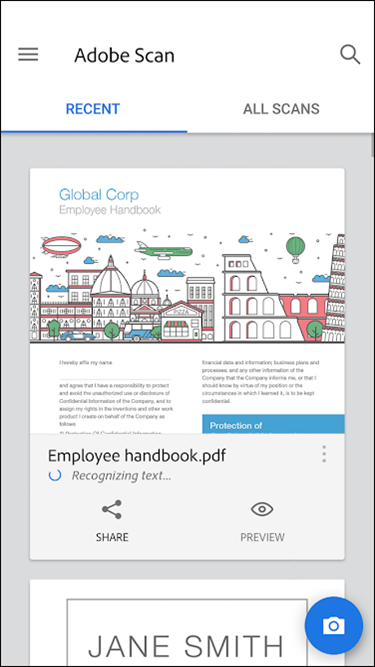 The app has a minimalist feel to it and comes with 5 GB of online storage on the Acrobat site. 5 GB is more than enough as scanned documents usually don’t take a lot of space.

Pros: The is free, works really well, offers 5 GB cloud storage, and OCR tech is one of the best.

Cons: Adobe Scan doesn’t support third-party cloud storage services. I couldn’t find an option to save as JPEG. There was only PDF.

Verdict: Adobe Scan is a cool little app that is focused on taking scans and extracting text from it. It is reliable and free but doesn’t play well with third-party apps.

Smart Lens will not only allow you to scan documents and convert it from image to text, but you can also translate it to other languages. You can use it to scan business cards and it will detect number, name, email id, and other info and sort it systematically.

You can also scan and convert a document or image with text in a foreign language. So, you can use it while you are traveling to foreign countries. There is also a QR code reader. The pro version, $9.99, will remove ads and allow you to use the app for as many scans as you like. 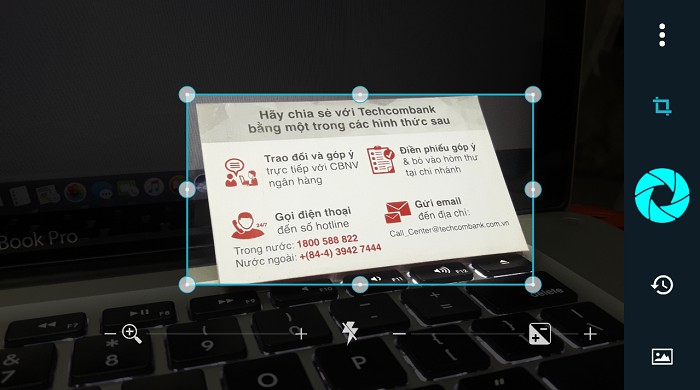 Pros: Support for foreign languages and comes with a language translator.

Cons: The only drawback is that it doesn’t support handwritten notes like Adobe Scan and CamScanner.

Verdict: Smart Lens is a good app which can come in handy while traveling abroad but lack of handwriting support limit’s the app’s capability by that much.

If you take a lot of post-it notes, this app is for you. You know how hard it is to digitize those. You take a picture and then either manually crop out individual notes or zoom in and try to make out what you’ve written. The post-it app solves this problem and lets you scan the notes using the Android’s camera. 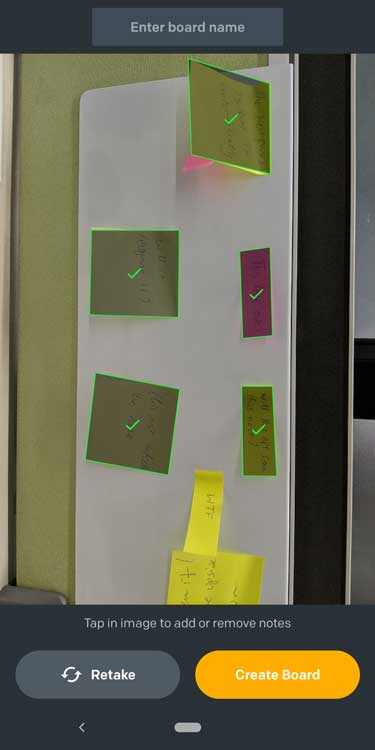 Using it is fairly easy, just get the app from the Play Store, point the camera towards your Post-It notes and you’re done. It can work with any type of colored notes and they don’t necessarily have to made by 3M but the app sometimes rejects the notes if they’re not completely flat against the surface. You can divide the notes into different groups so that everything stays organized, it also allows you to rotate the notes which makes the app really efficient.

Pros: Detects multiple notes at once, option to manually detect notes if the app skips it, an option to rotate, edit and group notes.

Cons: Doesn’t detect the notes if it isn’t flat on the surface, doesn’t transform the image to editable text.

Verdict: It is a great app to digitize your Post-It notes you may have taken during a meeting or are stuck on the fridge at your home.

If you are an Office 365 user, Office Lens is the best option for you. Same way, if you are heavily using Google Docs, Google Keep is a really good option. If you are an occasional user who needs a good OCR scanner without all the bells and whistles, Text Fairy will help you out. Adobe Scan is powerful, free, works with handwriting too, and comes with 5 GB storage.

If you need a robust document scanner with OCR features, CamScanner, though expensive and a little buggy, is still better because it offers so many other features that you will not find elsewhere.