I have a friend who just came back from a vacation and wanted to show us his pictures, but his iPhone screen is very small and he didn’t really have the time to upload it on the cloud for us to see. The point I’m trying to make here is, we may have selective sharing but we still can’t share content from one device to another. If I have a video on my Android that I wish to wirelessly play on my Computer, there is no native way to do it without downloading third-party apps. Similarly, Apple has the native feature to mirror your iPhone’s screen on the Apple TV but you can’t do it on to a Mac.

Enter 5Kplayer, a video player by definition but has a few impressive tricks up its sleeve. It supports all the major video file formats and has an additional Hardware Acceleration that is claimed to render 4K, 1080p videos without a hitch. 5K Player also works as a video downloader and supports YouTube, Vimeo and most of the popular video platforms. The most impressive part which they claim is the DLNA and AirPlay support. We’ll test the waters and see how far this product goes.

We’ll begin with discussing DLNA and AirPlay in brief.

DLNA: Digital Living Network Alliance) is an alliance of device manufacturers to provide a set of interoperability guidelines for sharing digital media content across compliant devices. The certified devices are smartphones, TVs, Laptops etc. You can share videos and audio over the Wi-Fi without any lag and quality loss. This feature only works between the devices that are on the same network.

AirPlay: It is a proprietary protocol stack for Apple products. This is used for wirelessly streaming media from Apple devices like iPad, iPhone, and Mac to Apple TV and HomePod. This only works with Apple devices but Apple has developed it as a third party technology and other device manufacturers can implement it on their products as well. Apple uses a DRM encryption which doesn’t let some websites that don’t apply the encryption to stream the media over AirPlay.

5KPlayer is more of a hybrid of few niche features and technology which makes it stand out in the market. It plays HD videos, DVDs, and music files. You can wirelessly stream audio and video via AirPlay & DLNA with potentially no quality loss and download online videos from YouTube, Dailymotion, Vimeo etc.

What’s so special about a glorified media player is the hardware accelerator in the software which takes advantage of the graphics card and CPU both to boost the playback, which means even 4K videos work with this software without any lag or hiccups. They claimed that this player also plays 5K videos but without extraordinary hardware like high-performance GPU and a 5K screen. We tested it by playing a couple of 4k videos on MacBook Air and Windows PC, both worked fine with no glitch. Audio files also worked perfectly there was no problem there.

Most of us consume our video content from YouTube, Vimeo, and Dailymotion. These websites don’t have an option to download the videos to your system. However, you can save certain videos offline for later viewing in the YouTube App for Android and iOS. While some of us are content with keeping our content online, we have video downloaders available to download the videos. 5KPlayer lets you download all the files and save it on your system. 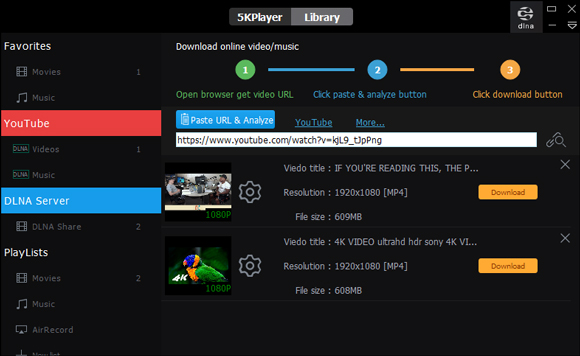 Also, downloading videos is very easy with this application. Copy the link from the web browser and paste it into the URL bar in the application window. It will pull up the available quality and save the video. The default is set to 1080p mp4. However, if you wish to download other format and resolution like 480p, 720p, audio only or even 4k videos, then click on the settings option on the link to see a list of available formats. 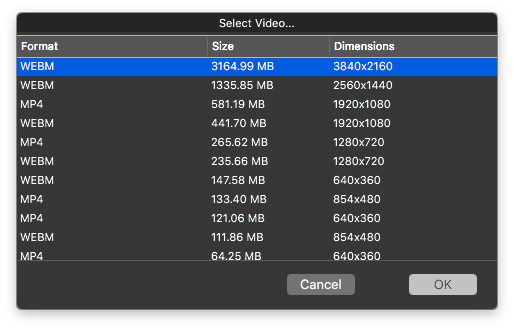 The videos are saved in a convenient location and are displayed right there on the app under the YouTube videos tab. The audio-only option is also available if you wish to just save the audio file on your system. 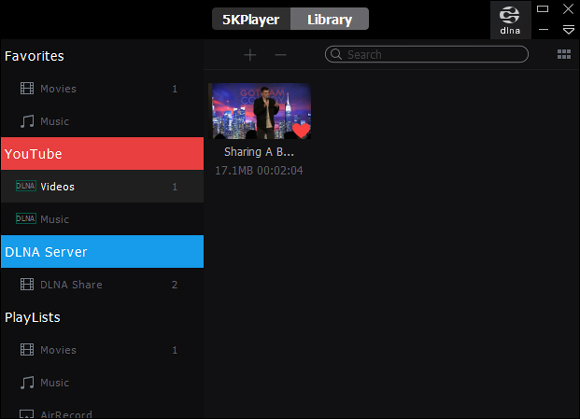 Stream Video with DLNA and AirPlay

The most intuitive feature which they claim on their website is wireless DLNA and AirPlay streaming option. DLNA works across the platforms on the certified devices and used for fast media streaming. 5KPlayer incorporates this feature and lets you stream content over all the devices which are on the same Network. 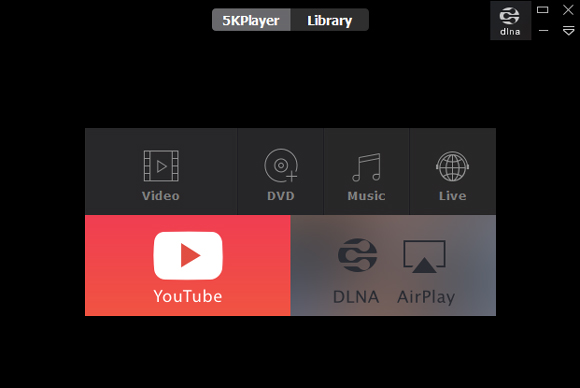 I took my Android Phone and downloaded a third party app which is essential for this feature to work. BubbleUPnP is a free app that lets you use stream across devices. It works by initiating a server on the network which is visible to all the compliant devices. I chose a device to broadcast the media content on with the Android App. In this case it was 5KPlayer and it worked fine. 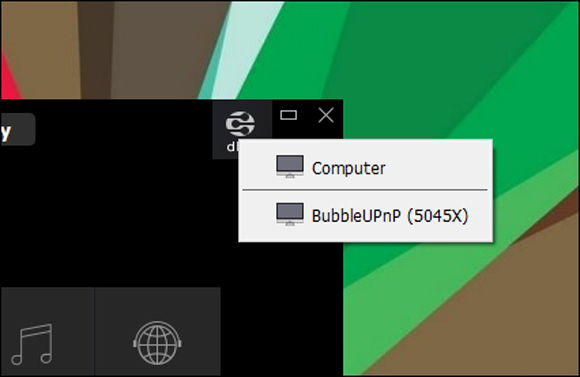 Now, what if I wanted to do it in reverse and play the media content from my computer on the Phone. The 5KPlayer creates the same server on the computer and broadcasts the media to one of the selected devices. Just as I hoped it worked fine here too. I also tried with a Smart TV and had no problems there.

The one feature which I wasn’t able to test was the AirPlay on the Windows. It essentially creates an Apple-compliant virtual device to stream or mirror iPhone and iPad to the Windows using the AirPlay. It had the option available but I couldn’t turn it on. I can only hope it was an issue on my computer only. So, DLNA worked on my devices and windows application and AirPlay didn’t work with Windows which I can imagine is a bug which will be fixed in a later update.

Now we’ll move on to test AirPlay feature on the Apple. 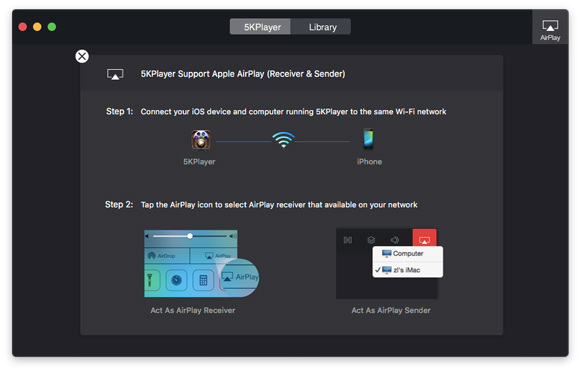 I installed the 5KPlayer on the MacBook Air and ran it. (For some reason the setup redirects you to CNET website) Everything else is the same as the Windows environment and worked exactly the same way. The main feature to test is the AirPlay feature. 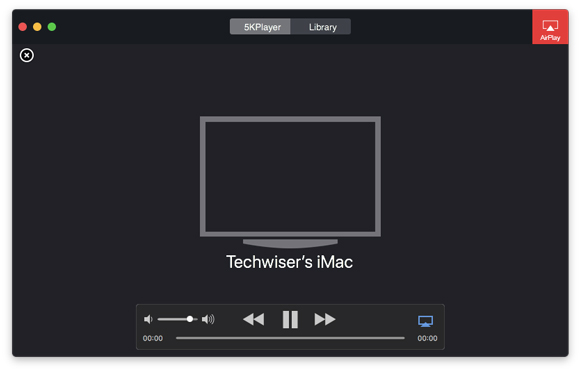 I used an iPhone, an iPad, an iMac and a MacBook to test the AirPlay feature. I downloaded the player in both the computers and ran it to see if they accepted the stream from the iPhone and the iPad. The screen mirroring feature worked fine. Apple uses a DRM encryption during the stream of content via AirPlay. If any third party streaming platform doesn’t support the encryption, you can’t really view the content on AirPlay. I tried to stream a Video from the YouTube, it failed to load in the app. However, I was able to play the video on Google Chrome and successfully stream it to the 5KPlayer via AirPlay. 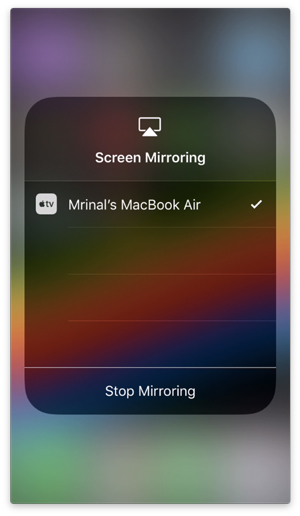 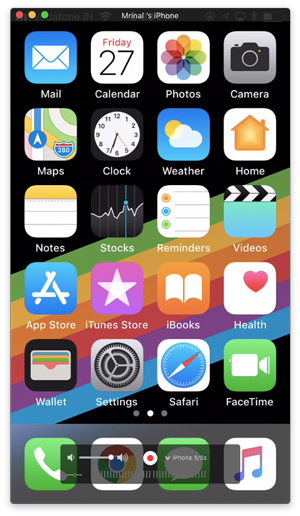 But what if I wanted to play media from my iMac to the MacBook. We tried all the ways in which we could, but the stream only worked for a few seconds and then abruptly stopped. The only thing which 5kplayer couldn’t do was play the media on to the iPhone and iPad or from one Mac computer to another. 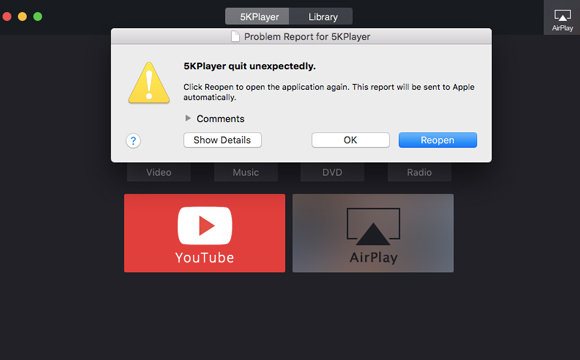 Pros: While being branded as a Glorified Media Player, it does have a few benefits. It brings your media to one place and saves the clutter. You can download, play and share the media content without even leaving the app.

5KPlayer is a decent media player that has many functionalities built right into it. You can play videos, DVDs, and audio files. The inbuilt Video downloader lets you download videos from most of the popular sites like YouTube, Vimeo, Dailymotion etc. You can stream media using DLNA and AirPlay which is great but some features need fixing. For example, AirPlay feature didn’t work on windows but it did on Apple devices.