Whether you are taking a shower or on an evening stroll, a good idea can strike anywhere. In fact, most of the great ideas come when you least expect or when your brain is in a “diffused state”. That said, your brain is also quite used to forgetting a lot of thoughts; it only makes sense to jot down your ideas immediately, no matter how confident you are that you’ll remember it. 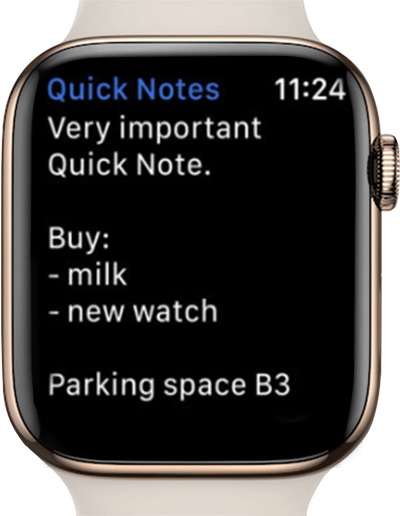 Pros: Simple and easy to use to the app, if you want to preview your note on your Apple Watch

Cons: There is no option to create notes directly from Apple Watch, neither does it have a checklist option.

Availability: Quick notes is a free application available on iPhone and iPad but there’s no Mac version yet.

Next up we have Google Keep. While Keep is fairly powerful, it offers limited functionality on Apple Watch where you can only preview the existing notes. However, you can add items to a list and mark those checked when done. If you’re already a Google Keep power user then it makes sense to use it on your Apple Watch as well. 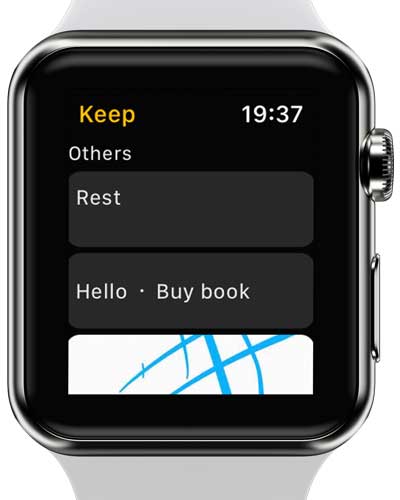 Cons: Can not create or edit notes with the Watch app.

Availability: The Google Keep app is available for both iPhone and iPad.

Price: The app is completely free.

While the apps above are decent, those lack a basic feature, the ability to add written notes from Apple watch. N+otes fill in that gaps and offer you the ability to add written notes from the Apple Watch itself. I agree that typing on Apple Watch is out of the question and scribbling is painfully slow but the voice-to-text notes on Apple watch work wonderfully well after the new watchOS 7 update.

The iPhone version of the N+otes is equally simple in the interface where you can only use the keyboard to take notes. So if you need a simple app to take text notes on your Apple watch and sync those to the iPhone, N+otes work great. 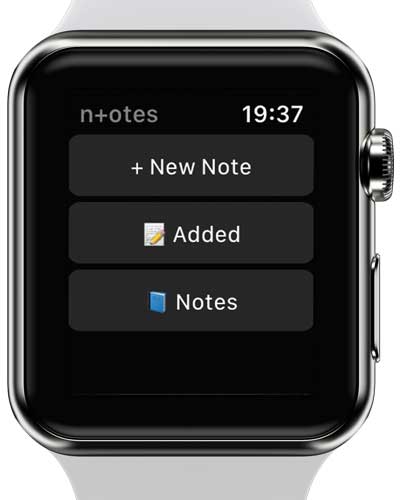 Cons: No way to delete notes from the Watch.

Availability: The app is available for iPhone, iPad, and Apple Watch.

Price: The app is free to download and has ads which you can remove for a one-time payment of $5.

Next on the list is the widely popular note-taking app – Bear. Bear is a free note-taking app, available across all devices such as the iPad, iPhone, Mac, and Apple Watch. The home screen of the Bear app on your Apple Watch will simply give you a list of all the existing notes with a dictation button on top. You can add a new note by tapping the button and voicing your thoughts. To see more options of input, simply use 3D touch on the mic icon which will give you the option to create a note by voice dictation, use of scribble feature, or even create a smiley note.

In my testing, the voice dictation is pretty good, especially after watchOS 7 update. You can create a long note where all the punctuations and commands like ‘comma’, ‘semicolon’, and ‘next line’ work just fine. You can view existing notes across all devices or even edit them. If you want to delete a note, simply swipe left for options on your iPhone and select the delete option. An additional feature lets you search notes and texts inside them on your iPhone and iPad. Also while on iPhone or iPad, it gives you many input options right above the keyboard like photo insert, scribble on screen, add a web link or URL, etc. 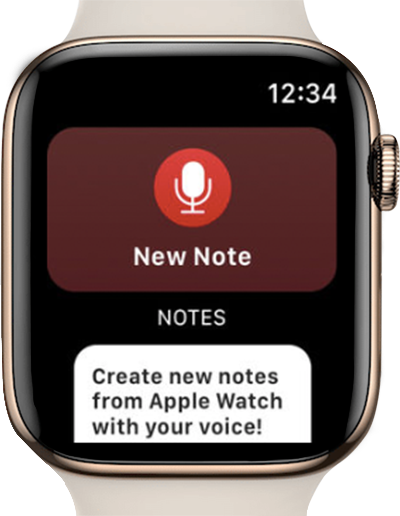 Cons: No option to create a checklist or voice recording.

Price: Bear is a freemium app, The Pro version, though a little expensive at $2 for a month and $15 a year, gives you unlimited sync between all devices, themes, and an export feature to convert your note into a PDF, DOCX, HTML, JPEG, etc.

The Notebook is another popular note-taking app available on iPhone, iPad, Apple Watch, and the web version. The very first time you open the app, it will prompt you to sign in to the notebook application on your iPhone or iPad in case you want to use it across all devices. However, you can also log in as a guest and bypass to sign up.

On the home screen of the application on your Apple Watch, it gives you the option to either create a note with voice dictation or record audio. Yes, you can create voice notes with Notebook. There is a time limit of 30 minutes for voice recording which totally makes sense because if you are willing to make notes for that long, you might as well grab your smartphone. The best part is that you can also playback your audio right on your Apple Watch. 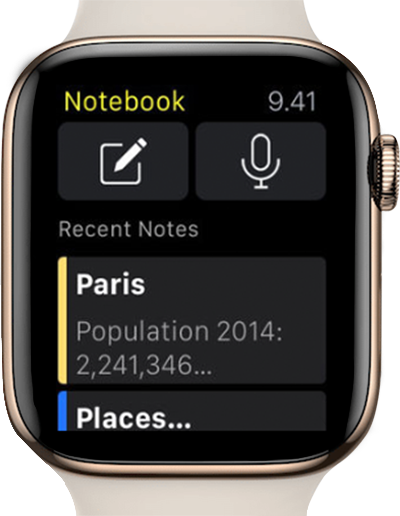 To create a note you can either use voice dictation to dictate notes on Apple watch or scribble just as in other such applications. However, you may also insert checklists inside the notes in the notebook application on your iPhone and iPad which automatically. It syncs with your Watch as well but there is no option to insert a checklist through your Apple Watch.

Some additional cool features like the sketch option which comes in handy if you are an iPad pro user. If you sketch often but even your fingers will do if you are on a normal iPad. The sketches sync to your Watch as well and are visible there as pictures in a non-editable format. You can even view PDF on the Apple watch.

Additional features also include adding notes through adding files in the phone memory or iCloud. It shows screenshots as notes which usually aren’t supported by Apple Watch because of file size issues. The camera feature inside the application also offers document scanning but that didn’t work out so well for us. You may try your hands on it though.

Cons: Nothing we could find.

Availability: Notebook is available on all Apple devices – iPad, iPhone, Mac, and Apple Watch. It even has a web clipper.

Price: Notebook is a free application with absolutely no ads and no extra paid features. In our experience notebook is one of the best apps for note-making on your Apple Watch.

How to use OneNote on Apple Watch?

You can’t change or edit the existing notes that are only available to view on Apple Watch, you’ll always have to create a new note if you want an addition through Apple Watch. also, bullet points and numbered lists are not available on One Note in Apple Watch nor are the photos or sketches supported. It’s good for a quick note but for everything else you’ll really have to grab your phone only. 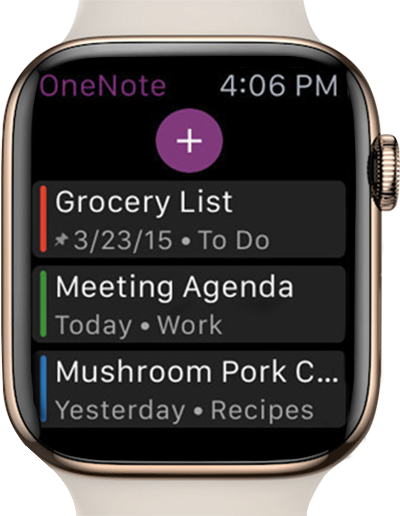 The app lists all of your recent notes, and you can access and read them easily. If you’re looking to find archived notes or ones from other subsections you might not have touched for years, then you’ll either end up scrolling for a long time or giving up. One Note on other platforms offers a lot more like note sharing, photos, and sketch, checklists etc but is limited to only dictation on Apple Watch even with paid accounts.

Cons: Apple Watch version of OneNote is quite basic, it only supports voice dictation.

Availability: Evernote is a cross-platform application available on iPhone, iPad, macOS, Android, Windows, and even on the web.

Last but not the least, we have Noted. app. It’s a well-made app designed to take notes in a better way. Instead of relying on just text, Noted focuses, and encourages you to take voice notes on the Watch and organize those on the iPhone. The app interface on the Watch is fairly simple with just a record button. Press that and start recording, once you’re finished with your notes, the app automatically syncs everything to your iPhone. You can also add time tags to your voice notes at the time of recording which would help you organize the notes better afterward.

Even though you can listen to the notes that you’ve recorded on the Watch, the real magic happens on the iPhone app where you can convert your audio notes into written texts. The iPhone app has many such powerful features such as intelligent playback, rich editor, transcription, etc. You should really give this app a go if you want a powerful note-taking app to streamline your lectures, conferences, appointments, etc. 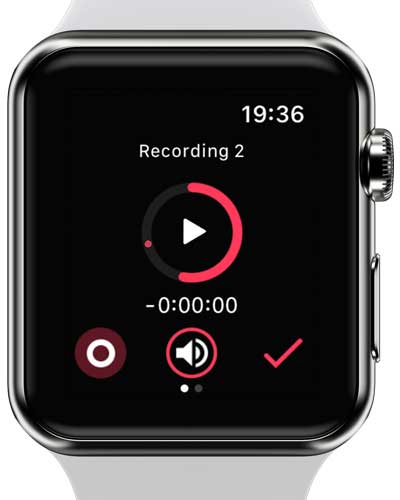 Availability: The Noted app is available on iPhone, iPad, and the Apple Watch.

Price: The premium subscription for the Noted app starts at $2.49/mo.

These were some of the best note-taking apps for your Apple Watch. I personally prefer Notebook for its simple yet powerful features. If you are already a Google Keep or Onenote user, then it makes sense to use their respective apps.

Let us know what apps are you going to use in the comments below.