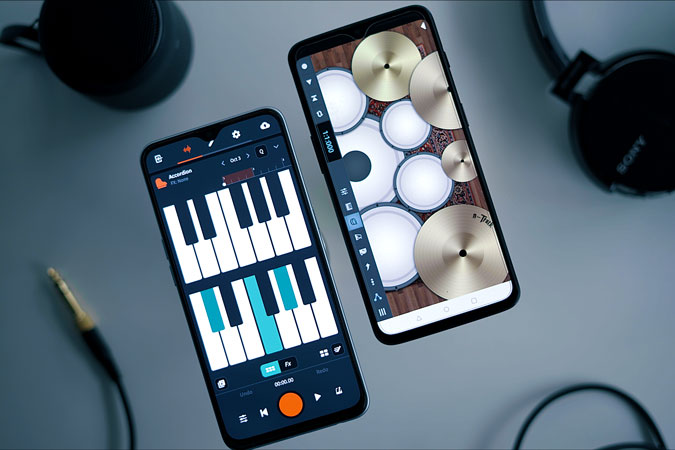 Whether you are a professional artist or a complete beginner, musical ideas can pop in your mind anytime regardless of the time or place. Since a studio isn’t always accessible, and Covid-19 has restricted everyone in their home, your mobile can easily become a music production powerhouse. Long gone are the days when Android phones were substandard in terms of hardware. So without wasting time, here are some of the best music production apps on Android you must check out. Let’s begin.

Every phone comes with a voice recorder pre-installed or you can download one of these third-party voice recorders for Android. Though it’s a basic single-track recorder, it can also provide fair quality audio in most cases. These are the go-to apps when it comes to just tap and record style of music production especially if you are a singer-songwriter.

Since these recorders are mostly pre-installed and dedicated to casual recording, you’re likely to miss out on high-quality exports (FLAC/WAV). Apart from that, there is no option for multi-track recording. So for someone looking at making a melody with various tracks, there isn’t really an option.

If you are looking for a simple music production app that lets you record multiple tracks try this one out. N-Track has a basic interface out of all the apps listed here, which makes it extremely easy to use. It allows you to create a base track and lets you add more tracks for complex melody recordings. So if you have a band, the 5 track audio support will suffice.

The app features effects like reverb, echo, pitch shift, and compression which are pervasive and present in most music production apps. In addition to this, exclusive features like VocalTune (pitch correction plug-in), Amp stimulation (playing an instrument with various amplifiers for a unique sound), etc come in handy to create a unique sound.

The only caveat is that there is no support of exporting in the free version but paid gives the option to export in both mp3 and WAV formats.

Bandlab has all the basic features that a musician would require, an audio recorder, sampler, tons of instruments, and also a social media feed to keep the artist’s life updated. But what separates Bandlab from the rest is the collaboration feature.

Bandlab is basically a social media platform in addition to being a recorder. Collaboration can be done by inviting artists or even forming bands within the app itself. It takes the social media quotient a step further by adding the use of photos, videos, and even emojis.

In terms of music capability, it has a 12 track recorder with the option to import audio, an effect unit with over 100 guitars, vocal presets, and an unlimited storage capability. It is also seamless when it comes to accessing the project on multiple devices. Lastly, it has a built-in tuner for guitarists and a metronome.

This app may be of particular interest to people who love analog synths. Its interface will give you a feel of entering into a room laden with a rack full of synths and wires.

The app packs enough capability that you can play with up to 14 synths at a time, making it a versatile choice. A robust Wave editor lets the user to pitch-shift and time stretch. Detecting the BPM of a song is also fairly easy. There is a dedicated master section with parametric EQ and Limiter to make the sound richer.

A major downside is its inability to export in its demo version.

An app by the developers of the world’s most downloadable DAW. Yes, it means business.

Fruity Loops’ mobile version gives ample features to any user trying to produce music. It lets you record, sequence, and mix the tracks which are more than a bare offering for any singer-songwriter.

Also Read: How to find free background music for YouTube

If don’t have access to band members, FL Studio will take the burden off your shoulders. It boasts of drum kits, synthesizers, and of course loops (Fruity- Loops). It also brings the piano roll from the desktop version to the phone which a lot of desktop FL users might find appealing,

There is a MIDI interface integration and flawless use of automation control. This makes it one of the best and most feature-rich apps when it comes to producing music on Android. It’s a paid app ($4/one time fee) but if you want to produce intricate beats and play with loops and samples, FL Studio easily defeats all the other apps on the list.

If you’ve been long enough in the music circle, you must have heard the Cubasis already. For those who don’t know, Cubasis LE3 comes from the industry-leading DAW company Steinberg. It’s the light version for the full-fledged studio app Cubasis 3. So, if you’re someone who has been planning to get a DAW for your phone, and has eyes on Cubasis 3, you can first try this out as it has the same looks and feels.

The demo version allows you up to four audio and MIDI tracks, along with MIDI hardware support. This is great if you want to add notes using a MIDI keyboard. If you’re a producer, you can play around with audio loops that come with the app.

That’s not it, you get multiple display modes, like phone, phone, phablet XL which is great when you want to adjust the screen for comfortable viewing. The trial version gives you a limited time limit of 30 minutes. You cannot save the project, however, you can export in .wav format easily. Once that’s over you can simply shut the app and open it again to reset the demo time.

Closing Remarks: Which is the Best Music Production App on Android?

The app store is loaded with plenty of options. These apps were a few which got my attention. Not only are they simple to use and they actually provide features that come in handy for any level of music production. While we can’t replace studios or DAWs made for desktops, these apps are stepping stones for budding music produces.

Fl studio, N-Track are the best in terms of being feature-rich. Bandlab is more of a social space for someone looking for a balance. Caustic, easily put, is for someone who wants to play with synths and effects. Cubasis LE 3 is a new entrant and currently only available on Android. The pre-installed recorder is for singer-songwriters looking to simply record without any fuss of loaded effects and multi-tracks.