While you can create intricate objects with design software like Blender, it does take a lot of time. Fortunately, there are a lot of 3D scanning apps out there that can do this for you within minutes. The results won’t be as good as a professional Scanner, but if you’re looking to create basic 3D models so that you can refine it later, then here I have a few 3D scanner apps out there. Let’s check those out.

There are a lot of 3D scanning techniques which yield varying results. Some of the more advanced techniques like Laser Triangulation, Structured Light 3D scanning are not possible on smartphones because of hardware restrictions. Photogrammetry is the one technique which allows you to scan 3D objects using just a smartphone camera and some computational algorithms.

Bellus3D is one of the most powerful 3D scanning apps out there. It can create a high-quality 3D model of your face using the front camera. Apple’s True Depth ID is one of the reasons that this app yields such good results. It makes use of the hardware and captures additional information rather than just a 2D image. You can scan your face in three modes; Face, Face+ Neck, and Full Head.

Scanning a model just takes a few seconds and the app guides you with each step and offers enough haptic feedback to make sure you don’t make any mistakes. After the scan is done, it takes a few seconds to compute and then generates a 3D model of your head. You can rotate to see the details and even share a video on Facebook.

The app also allows you to export the file in OBJ, STL, and GLB but requires a one time purchase that gives you unlimited exports for the next three days. Bellus3D is the best app to generate 3D models of the human face.

If you’re ever planning to renovate your house then the first thing an interior designer will ask you is the floor plan. They can give you an exact replica generated on a design software before even starting any work. RoomScan can help you create the floor plan of your house with easy to follow steps.

The app has three modes; Scan by Touching Walls, Scan with Camera and Draw Manually. The uses the Accelerometer and the gyroscope to measure the distance and angles of the walls in the first method. It is the easiest to follow because you just have to place the phone against the wall and follow the instructions until you outline the entire room.

The second method is more complicated but would actually let you scan the 3D space. You begin with entering the details of the room and start capturing the area. The app has all the components of a standard room including walls, doors, sliding doors, roof, etc. After you finish the scan it saves the information in a separate folder.

You can even connect a Bluetooth Laser Scanner module to capture the dimensions of the room easily.

After scanning all the rooms in your house, you can share the files in multiple formats including PNG, PDF, DXF, or CAD. RoomScan is great for scanning interiors.

This app uses Photogrammetry to scan objects in 3D. Patchy Scan captures the patches and computes to generate a 3D render of the object in the viewfinder. This happens almost instantaneously and you can see the progress in real time. 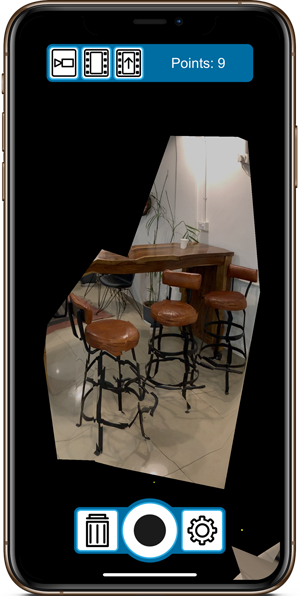 The app detects key points and when you tap the capture button it begins capturing the space. You can use it to 3D scan outdoors and large objects. After your scan is complete, you can export the app in obj format. The only caveat, it costs $8.99 for every scan. This is a little steep but you get a quick scan which would take hours to recreate in modeling software.

Qlone is a 3D scanning app that is based on fundamentals of AR. It allows you to scan objects using a marker and placing the object on it. You can seamlessly create and export 3D objects and use the files to 3D print, use it in apps and games, etc.

Using the app is easy, first, print the mat on a non-reflective paper and set up the app by following the steps within. After that just place the object on the mat and tap the scan button. It would show you a dome with segments. The app would prompt you to scan each segment until the entire dome is covered. It would process and create a 3D render of the object within the app. You can visualize how the object would look in different scenarios using the AR feature that would project the object in the real world on your viewfinder.

The app can export objects in OBJ, STL, PLY, X3D so that you can edit and finetune the rough spots in the software afterward. The app is free but it requires an additional in-app purchase(ranging from $0.99 to $29.99) to export the objects in those formats.

This next app is similar to Patchy Scan 3D but it is a lot more powerful. It is used to convert real-life objects to 3D models. It uses Photogrammetry to create a 3D mesh from photos captured at different angles.

Capturing an object to create a 3D model is simple, place the object in a solid background which doesn’t have a lot of texture. Start the recording by tapping the capture button and moving around the object slowly to get a 360-degree view of the object. Make sure the object stays within the box on the viewfinder. After Capturing the model, you can view it in the inbuilt 3D viewer and swipe to rotate the object.

Right now, you can only share the models in OBJ but you can expect more supported formats in the future. The app is free and you can create 2 models for free, you can upgrade to the Pro version to enable the export feature.

A 3D model would not turn out decent if you don’t follow the guided steps and Scann3D makes sure you do things right. With Scann3D, you can create standard wavefront objects, and then share them as point cloud data, polygon mesh, and STL models. It uses the same Photogrammetry technique to capture 2d images and then stitches the images into one 3d model.

To create a 3D model, make sure you have a tripod to mount your smartphone on. It is mandatory because a slight change in the image angle would result in a skewed model. You would have to capture at least 20 images to create one model. You can view the model in the viewer in the app.

After your model is done, you can share it or upload it to your Sketchfab account. The app is free but you would have to take a subscription to be able to actually export the models.

Okay, This is not a 3D scanning app but it is a unique app that captures photos in 3D. You can capture a subject in the 3D space and manipulate it by moving your phone around in the space. It uses similar technology to other apps in the list and creates a mesh using the multiple images captured.

To create a 3D photo, log in with your account and tap the red button on the bottom. After that just share the photo with your friends. The best part is they don’t even have to install the app the view the file. The link opens in any web browser and they can swipe to look at the complete picture. Fyuse is a great way to share 3D photos across platforms.

These were my picks for 3D Scanning apps for your smartphone. Some are more advanced and use the inbuilt hardware features of devices like Bellus3D which takes advantage of Apple’s True Depth tech and creates some stunning face models. Other apps take the more traditional route and use photogrammetry to create a 3D space with 2D images. Although all of the apps are free, every app has a pricey business model. If you are going to use it for once in a while situations then these apps are worth the money. Tell us which apps do you like the most in the comments below.