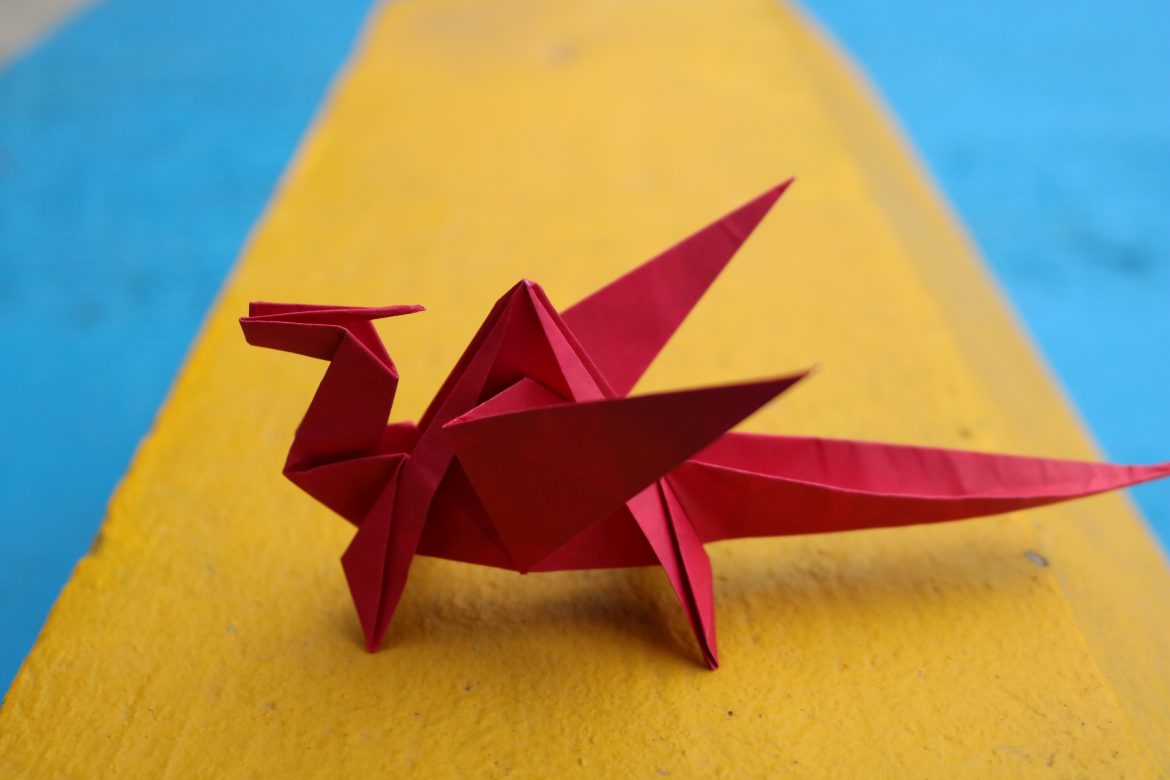 I remember doing Origami way back in school. It was the only art class I used to look forward to because crayons weren’t exactly my thing. Well, the memories came back afresh while watching Money Heist. Origami made a cameo in the show and I couldn’t think of anything better to start with while I’m stuck at home.

Remember making paper airplanes at school? Well, Origami isn’t as simple as that. It requires pateince and someone how can guide you for the first time. So, here are the best Origami apps for iOS as well as Android.

Also, consider buying Origami paper before you get started. You can buy bulk origami paper on Amazon for as low as $10, with variety of designs and colors.

1. How to Make Origami

If you are new to Origami and looking for a simple app with its step-by-step instruction, How to Make Origami is for you.  When you first open the app, you see Origami categories like animals, birds, flowers, furniture, etc. Tapping on any categorie will open the steps-by-step instruction guide on how to make it. You can jump to any step and in case you get lost, you can repeat the steps as well. The repeat option comes really handy when you are dealing with kids.

The app is free however you seldom see skippable video ads. They aren’t intrusive but I would have liked an option to pay and remove them.

Get How to Make Origami ( iOS | Android ) 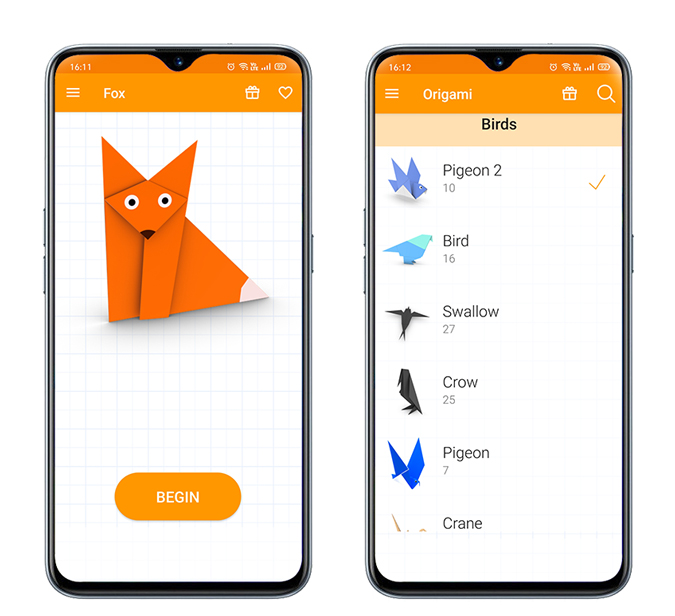 Unlike the other apps, ‘Paper Origami 2020’ has both photo and video tutorials. The photo section is pretty basic, as it doesn’t have any animation like the above-mentioned app. However, it’s easy to follow along with the instructions at every step. The video part, on the other hand, is far more comprehensive than the images. Although it sources all these videos from YouTube, having all the content at a single place makes it more convenient.

The app has sections for both beginners and intermediate users. Moreover, you’re not just restricted to basic shapes. You can find videos on costumes, home decor, gift ideas, etc. Also, if your kids aren’t interested in Origami, maybe showing them the Pokemon section will help. The only problem is the app prompts you with video ads that can be skipped after five seconds. 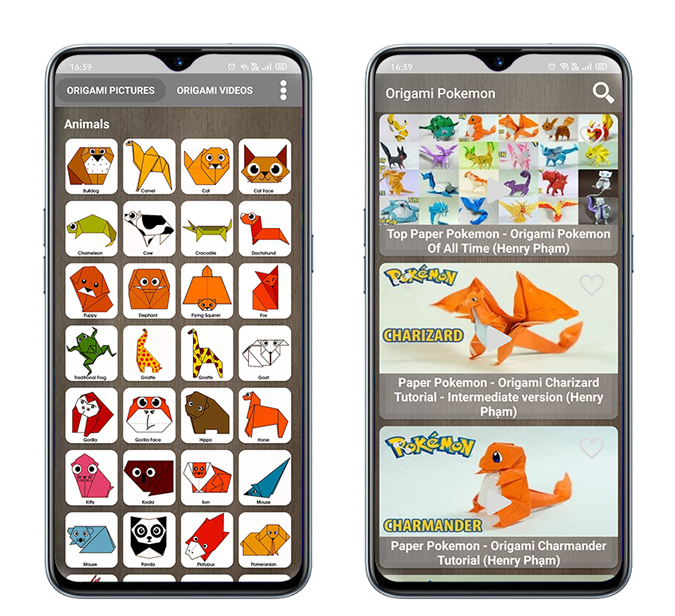 In case you find making animal and bird origami too simple, and you consider yourself an advance user, then Skilled Origami is for you. This one has intricate shapes of dinosaurs, submarines, and other unusual shapes like space invader, sorcerer, etc. If you use the app judiciously, you can work on your technique with these step-by-step tutorials.

Another thing, I loved that the app gives due credit to the designers with a name mention along with every shape. 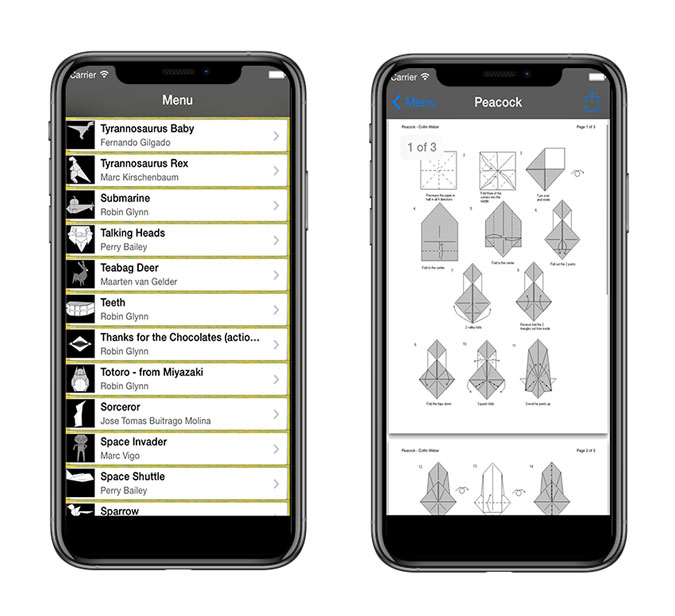 I’m sure the first time you tried your hands at origami, it was with a paper plane or a boat. At least for me! But, now I still want to try out making them but probably different types and shapes. Whilst most apps teach very basics of these shapes, there’re so many apps dedicated to making specifically shaped Origami. For instance, paper planes, weapons, boats, etc. Here’s a list of those specific Origami apps if you want to polish just a certain origami shape. 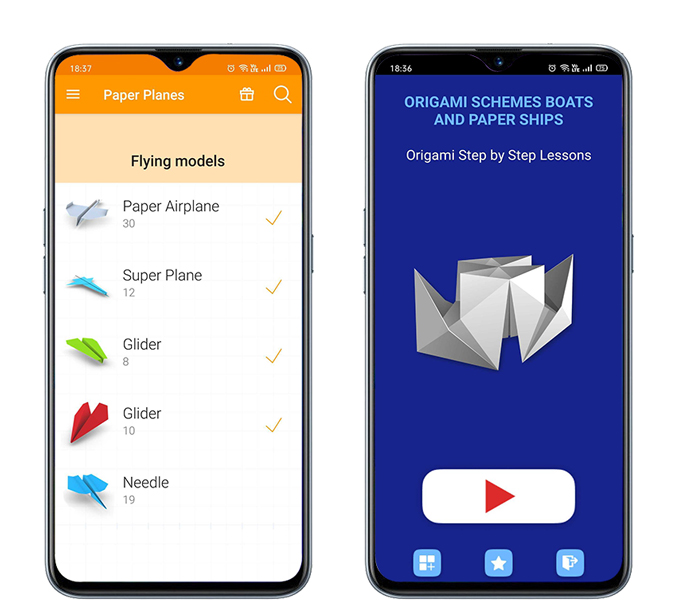 If you don’t want to download tons of apps, you can still use your everyday apps like Instagram, Pinterest, YouTube to learn Origami. For instance, I use the hashtag #Origami on Instagram to keep my feed updated for constant motivation. This way I can check out the photo or video and learn. It also makes the entire process interactive as you can chat with people right away.

You can use a similar search like Origami, Origami tutorial on Pinterest. If you want more one-to-one tutorials, videos are a great option. You can find a lot of content on YouTube. Some of the channels that I would recommend are Jo Nakashima, Daniel Sechel Origami, Origami How To, and Arte & Origami. 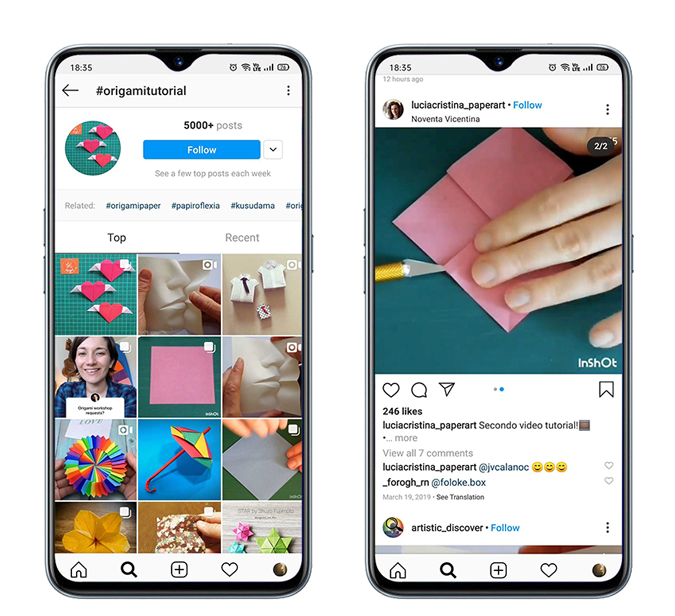 Unlike all the other Android & iOS apps in this list, Origami Simulator is a web app – this means it’ll work on Windows, Mac or basically anything with a web browser.

As the name suggest, Origami Simulator lets you simulate origami patterns. It’s a bit different from the other apps as it shows you a 3D view and folds all the parts simultaneously at once rather than step by step. In terms of control, you can use the slider to fold and unfold the paper. For a normal user, you can try playing with some basic shapes such as flapping bird, crane, train, etc. You can also view this in virtual reality by enabling WebVR in the browser and Vive and Oculus headset.

You can also import or export SVG files along with the option to record the simulation and save it as an image.

Whether you want to try your hands out with paper or you just want your kid to learn this skill. It’s a great way to pass time and is also considered as a great mental exercise. I hope you are able to make most of these apps and surprise your friends with the loss of origami sitting on your study table. This was my list of Top Origami Apps for iOS and Android. If you’ve more, do leave a comment below.