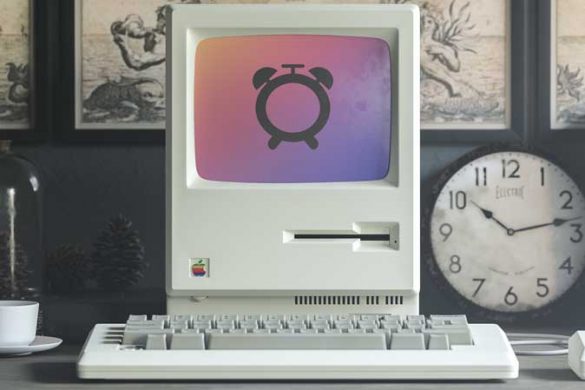 Whether you want a nudge after a fifteen-minute power nap or get a notification when your favorite game is about to begin, there’s an alarm clock app for you. I keep my phone away when working and setting the alarm on the iPhone becomes inconvenient. Sometimes, what you need is a desktop alarm app to get things done. That’s why I tried some of the best alarm apps for Mac that you must check out. Let’s begin.

Before We Begin With Alarm Apps for Mac

You can prevent Mac from automatically going to sleep in the System Settings. However, your MacBook would go to sleep regardless of the settings if you close the lid. Most alarm apps mentioned in the list won’t sound the alarm if the computer is in sleep mode. To fix this problem, you can install Amphetamine. The app prevents MacBook from going to sleep even if someone closes the lid.

Clock Lite is the simplest alarm app for mac that does the job well. It has a Timer, Stop Watch, Clock, and an alarm. Clock Lite doesn’t have any fancy customizations, snooze button, or even an option to change the alarm tone. You just get one tiny box to enter the alarm time and a set alarm button. It’s a straightforward approach and if you feel it won’t cut it for you, there are other alarm apps with more features below.

Clock Lite is free to use on the App Store. There’s a pro version for $1 that lets you choose between four different alarm tones.

Sleep Alarm Clock bundles an alarm clock and a sleep timer in one package. The alarm clock interface is minimal and beautiful so much so that you can use the app as a screensaver. There is an option to create a recurring alarm, adjust volume, change alarm sound, and even set the snooze duration.

The app has more than 10 different alarm sounds to choose from. You can use the 12-hour or 24-hour time format as per your convenience and even create multiple alarms by upgrading to the paid version. As much as I like the interface, I faced a weird glitch while testing the app that overlays every setting on top of each other. I hope it is just a minor glitch and they fix it with an update.

The app is free on the App Store and only lets you create one alarm. You can upgrade the app for $4 and set unlimited alarms.

Wake Up Time is another alarm app for mac that offers a different experience. The app interface looks like an actual bedside clock and behaves that way too. The clock shows the time like the old-timey seven-segment display. You can press a button to turn off all your alarms and slide out a console from the side to set an alarm.

You can choose time, sound, volume and it even has a fade-in option. I particularly like the fade-in feature as it slowly increases the alarm sound which is both serene and doesn’t jolt you awake with one loud bang. Like previous alarm apps for Macs, you can adjust the snooze time, and even keep the app on top of other apps at all times. The app is free on the App Store.

Get Wake Up Time (free)

Tiny Alarm is a feature-rich Mac alarm app that sits on the Menu bar. The app focuses more on functionality than aesthetics. You get the option to set multiple alarms that can range from mere seconds to years. There are four different-styles of alarm sounds such as macOS System sounds, user recordings, and local music files. It means you can record your voice as an alarm tone and when the alarm goes off, you’d hear yourself gently waking you up from a nap.

The app also uses notifications to notify you when the alarm has gone off on Mac. My only gripe is the setup window. It’s complex and you need to check off boxes to enable alarm sounds every time you set an alarm or it won’t emit a sound at all. Tiny Alarm is paid and costs around $5 but you can get a 30-day free trial to see how it works for you.

Timeless is another carefully designed alarm app for mac that offers a plethora of intuitive features. For starters, you get all the standard options such as unlimited timers, custom titles, custom alarm sounds, adjustable snooze and volume, and of course fade in.

I, however, like the app for its use of different colors. The interface changes color based on the time of day and keeps the app interface fresh. For example, alarms set early in the morning would have a blue background, and the alarms set late at night would be purple. You can also set the app in the nightstand mode that shows a minimal clock on the Mac screen. Timeless alarm app for Mac is available on the App Store for $4.99.

Awaken is a complete alarm app for mac with all the features we saw above. You can do all kinds of stuff such as change snooze time, set unlimited recurring alarms, fade-in music, and brightness, etc. However, the selling point of Awaken is that it can open any productivity app of your choice when the alarm goes off. It doesn’t even have to be an app either, you can open a file as well. Useful when you have some work to do on Mac.

The popular alarm app for Mac also has an option to automatically stop the alarm if you don’t interact with it for a while. The app is available on the App Store for $6.99.

Unlike other Mac alarm apps on the list, AlarmDJ is an online alarm app that you can use from the Chrome browser. The app lets you set a YouTube video as your alarm sound and whenever the alarm goes off, the video would start playing. You can even play your existing playlist or create a new one from scratch.

Due to YouTube’s restrictions, Mac’s alarm won’t go off if the tab is not on the front so keep that in mind. AlarmDJ is free to use.

Which Alarm App on Mac Do You Use

These were a few of the best Mac alarm apps that you can have. There’s an app for every use case like you can get awaken if you want to open a specific app when the alarm goes off. Use AlarmDJ if you want to play a music video on YouTube, and Tiny Alarm if you want to use your own voice. What’s your favorite alarm app for mac, let me know on Twitter.