How to Control the Camera and Music Player With Amazfit Bip

When I bought the Amazfit Bip, I was excited to see what all I can do with it. Being Xiaomi-backed, I knew it would have a huge backing of third-party apps and custom firmware. Well, turns out you can control music, camera, TV and lots of stuff using the Amazfit Bip. For this article, let’s just stick to controlling a camera or music player using the Amazfit Bip. Unfortunately, this workaround only works with Android, so if you are looking for Amazfit Bip Camera Control with iPhone or even music control, this article is not for you.

In order to control the camera, we need to remap the button on Amazfit Bip. After a lot of exploration, I found the ideal app to do this – Mi Band 2/3 & Amazfit Selfie. This lets you remap the single click of the button action to click a picture. However, the caveat is that it only works with a selected number of third-party camera applications. Below is the camera apps it works with.

Pairing the app with the Amazfit Bip is pretty easy. You need to have Mi-Fit installed and the band connected to the Mi-Fit app. Now, install the Mi Band 2/3 & Amazfit Selfie app and open it. The app will auto-discover the MAC Address of the Amazfit Bip if it is connected with Mi-Fit.

In case the app fails to identify the watch, you can manually enter the MAC Address in the text box. To find the MAC Address of the Bip, open the Mi-Fit app and go to the Profile Section and tap on the Amazfit Bip under “My Devices”. 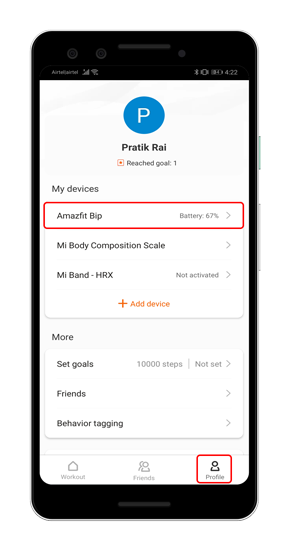 Once you are on the Amazfit Bip page, scroll down to the bottom of the page. Here, you will find “Bluetooth Address” which in turn is the MAC Address of Amazfit Bip. 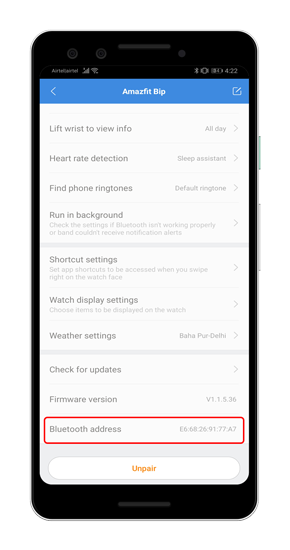 Read: How To Unlock Windows PC With Mi Band 3/2

Now, after you have entered the MAC Address, click on the Connect button at the bottom. 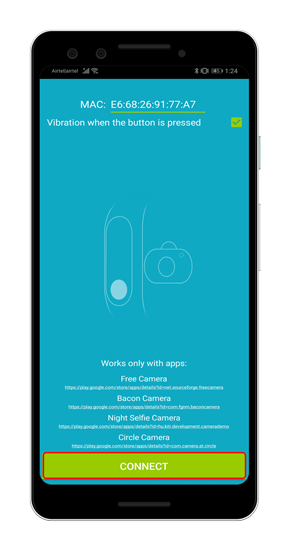 After you click on the connect button, wait for a few seconds and the app will establish connection with the watch. As soon as it does, the Connect button at the bottom will change to Disconnect. 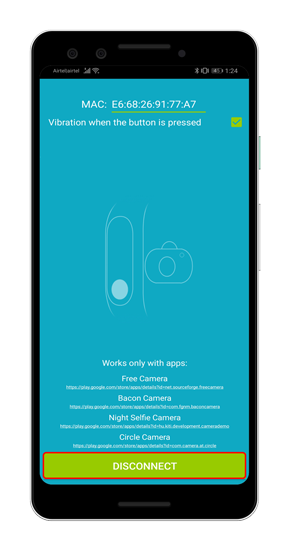 This is a handy utility when you want to take a group picture or if you have the camera mounted on a tripod. Although, it would have been better if it worked with all the camera apps. This wasn’t much of a problem to me since I was already using Bacon Camera.

Unfortunately, there is not a single app which lets you control both music player and camera. For a music player, we would need another third-party app called “Amazfit BIP Assistant“. This is one of those apps with poor UI but extremely useful functionalities.

Anyways, once you have the app installed, open it and it will ask you to enter the MAC Address manually. In case you don’t know how to do that, follow these steps mentioned above. 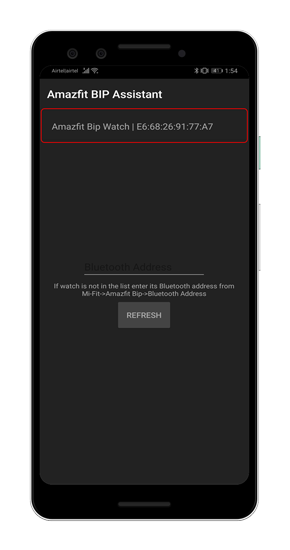 Once you have the band connected to the app, you will have a screen to customize the watch button actions. In case it looks confusing, we are on the same plane. I have kept the action to “2 Pause 3 Next” which means two times tap would pause/play the song and 3 times tap would move to the next song.

You also get a slider which lets you customize the interval between the clicks. The default value of 600 ms is fine and would work for most of you. 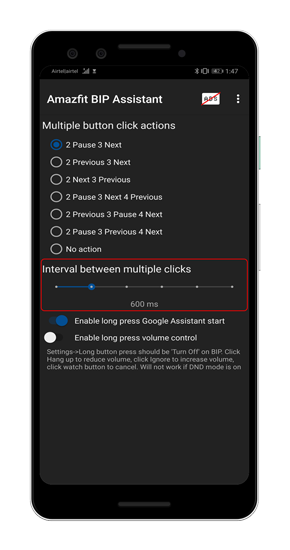 You also have the option to map long press of the button to either enable Google Assistant on the volume control. However, please make sure that you don’t have other actions assigned to long press. In my case, the long press was mapped to start Outdoor Running activity. In such scenarios, you will have conflicts and the actions won’t work as desired.

For music player control, you can find tons of apps on the Play Store. I liked these apps due to the simplicity and ease of use. In case you want further functionalities like charts of your data, comparisons, reports along with button remapping, you can go for paid apps like “Amazfit & Tools” or “Notify & Fitness for Amazfit“.

For any queries or issues let me know in the comments below. You can also come and hang out with me on Instagram and have a chat about Tech.