It may not be every day but there will times when you are on the go and required to check on your server or IoT device for its status or performance. In those situations, there is nothing better than the ability to login to your server via SSH.

SSH provides an encrypted channel between a client and a server. Typically it uses the command line interface, but it can also be used to run a GUI application on the server. With an SSH server installed on your Android, you can not only access your Android from your computer, but also, copy files via the scp and sftp programs. Similarity, with an SSH client on you Android, you can check the status of your servers and IoT devices.

Unfortunately, Android has no built-in SSH feature. But that doesn’t mean you cannot access SSH via Android. Here are some of the best SSH clients for Android.

Termius is one of the beautifully designed and free app to access to SSH, Mosh, and Telnet. The user interface is pretty minimal and using the app is also very simple. All you have to do is enter the SSH command to log into your server and start managing your server, Raspberry Pi, Docker container, or any other service or machine. In fact, you can even access your own Android device using the local terminal. As an added bonus, the app also has a built-in SFTP client so as to make it easy to manage, download, and upload files and directories on your server.

If you are looking for a fully featured SSH client with a good design then try Termius.

Price: The app is free but some features like SFTP, terminal tabs, SSH key agent forwarding, fingerprint protection, sync between machines, ability to save and run snippets, support for environment variables, etc., are locked behind the monthly or annual subscription. You can get pricing details from here. 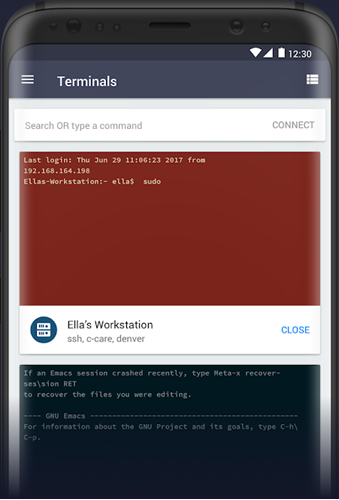 ConnectBot a popular SSH and Telnet client that is completely free with all the features and customizations you will ever need. The best thing about the app is it gives you a wide range of options while creating an SSH host. For instance, you can use SSH auth agent, enable compression, customize font-size, modify how the DEL button works, etc.

Sure, ConnectBot doesn’t have all the features of Termius but it makes up for it with its ease of use and customization options. And, did I say it is completely free? So if you are looking for an easy to use SSH client that has all the basic features then ConnectBot is for you.

Price: The app is free, has no ads or in-app purchases. 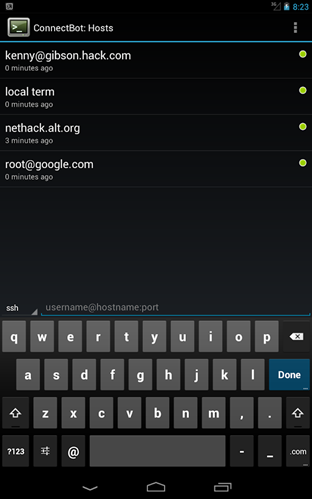 JuiceSSH is yet another awesome SSH, Mosh, and Telnet client. The app is sleek, minimal, and feature-rich. The best thing about JuiceSSH is it lets you set identities for different connections. In case you are wondering, Identities are a set of usernames, passwords, or private keys you use for multiple connections.

While creating an SSH connection, you can configure it to run a specific script at login. This feature is very useful when you always do that same thing after logging into your machine. Other features of JuiceSSH are local Android terminal support, third-party plugins, multiple themes, support for external keyboard, ability to copy and paste between sessions, RSA key generator, key forwarding, compression for slow connections, ability run multiple SSH connections in the background, etc.

Price: The app is free and has no ads. But, the app contains in-app purchases to unlock some locked features like post login script, dynamic port forwarding, support for Amazon EC2 instances, etc. 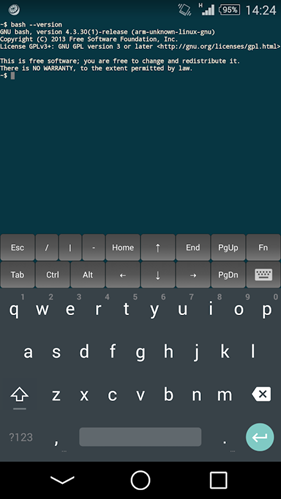 Far Commander is a relatively new SSH client for Android that is pretty basic and easy to use. One of the features I really like about Far Commander is you can create specific commands and categorize them as needed. You can then use these pre-configured commands in various SSH sessions with just a single tap. Of course, you can also categorize all your SSH servers into different categories for ease of use. The app also has a backup feature that allows you to backup all the custom commands, server information, and categories.

As I said before, Far Commander is a basic SSH client with no advanced features whatsoever. That being said, it gets the job done seamlessly with just a few taps.

Price: The app is free and has no ads. Though the app has in-app purchases, they are limited to donations, at least as of writing this. 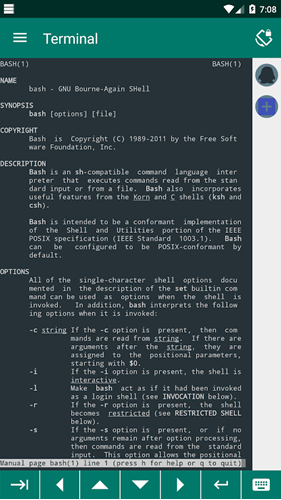 Mobile SSH is free SSH client that is designed based on OpenSSH and Putty. The app is very basic, has no settings or configuration options, and its user interface is not its strong suit. However, the app supports multiple SSH sessions and RSA key authentication. Just add your SSH details, tap on the connect button and you are good to go. Nothing more, nothing less.

If you are just looking for a simple SSH client that gets the job done in a pinch then Mobile SSH is a good choice.

Price: The app is free and has ads. RSA key authentication and support for multiple SSH sessions are only available in the pro version. You can purchase the pro version as a separate app from Play Store for $2.99. 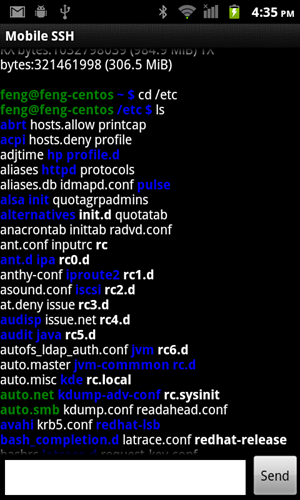 Termux is another very popular SSH client for Android. What makes Termux special is its support for extensive Linux package collection out of the box. Most of all, Termux is unlike any other application on this list. i.e, it is a powerful terminal emulator. So, when you install the app on your Android device, you will get access to Linux shell where you can install different packages and upgrade or remove already installed ones. In fact, you can use Termux to develop in C. Since the app is a straight terminal you can use the SSH command to connect to your server or other SSH services just like you’d do on a normal computer.

If you are feeling a bit bored, you can even run text-based games on Termux or convert video with FFmpeg. Simply put, if you are a little bit adventurous and have the know-how on how to deal with Linux shell then try Termux. You will feel right at home.

Price: The app is free, has no ads or in-app purchases. 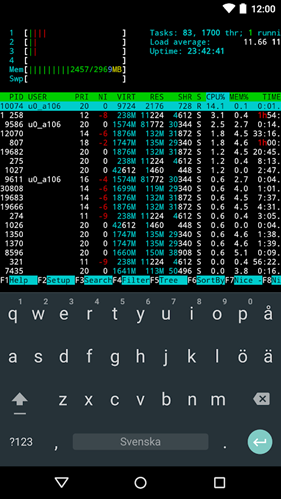