Bored of talking to your friends on Facebook and WhatsApp? Looking to spice things up a little? Talking to complete strangers can be really therapeutic if you hit it off. Living in the Digital Age has its own perks, one of which is the ability to chat with random strangers anonymously using your smartphone. Here is a list of the best anonymous chat apps for Android and iOS that you should check out.

Before we begin, chances are most of these anonymous sites might save your chats, even though they say otherwise. So, don’t say or do anything in the chats that will make you regret later. With that being said, let’s begin.

Remember the old days when letters used to take time to reach and could sometimes take days? If you love to have that curiosity to receive someone’s else message back unlike instant messaging nowadays, Slowly might be perfect for you. The concept is to connect you to users all around the world. You can exchange messages with them just like a pen pal and mail exchange changes depending on the distance between two users.

The app has two options to match you anonymously with other users. One is auto-match which is a no brainer. The second is a manual with which you can apply filters like age, zodiac sign, topics, gender, etc. The app is free but if you want to up your game, the pro version comes at $3.5/monthy. This gives you more search filters, enhanced media sharing, double the friend limit, etc. 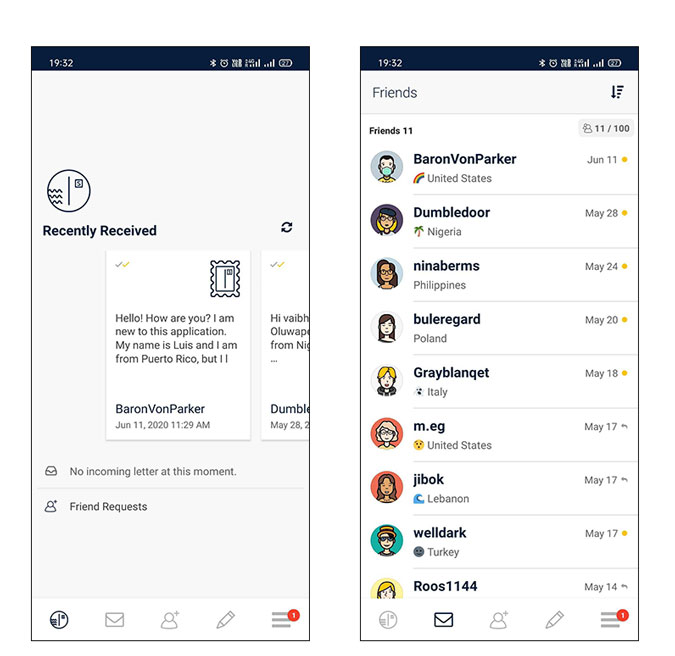 Best for requesting strangers to wake you up with a call

Wakie was introduced as a non-traditional alarm app that offers calls from strangers to wake you up. However, it is more than just that and also functions as an anonymous chat app. You can also ask for opinions, suggestions, and even request for some company. There is an option to listen to other people. All of these requests are posted on a live feed board and people can tap to join.

The app is not completely anonymous and you can choose to show your original profile but that’s optional. However, if you want to hide, you can do that in settings and hide your picture, name, and other personal details. Wakie works well and has an active community of awesome people. 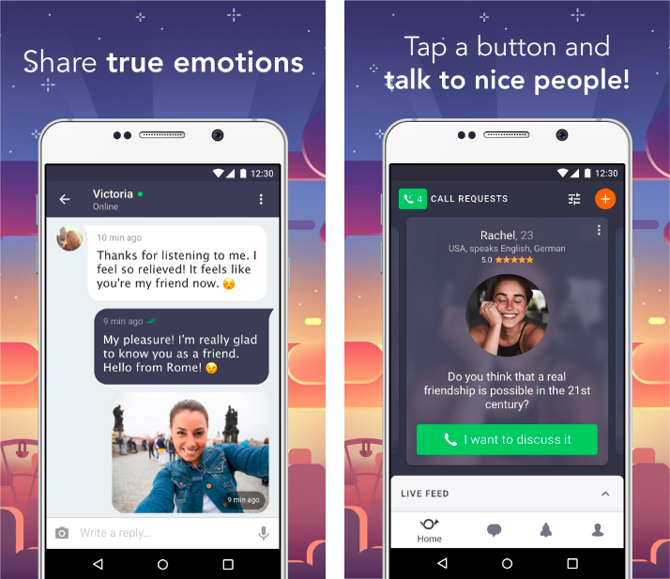 Best for Chatting anonymously with people near you

Connected2.me is another one of anonymous chat apps that are heavily inspired by Instagram (ahem Snapchat). Once you open the app, it shows you a bunch of profiles near you with whom you can chat directly. And on the top, it has stories from its users, just like you see on Instagram.

You don’t need to create a user account to send or receive messages, however, you will need one to create stories. There is also a unique ‘Shuffle’ feature that connects you with random users who’re online and available for chat. 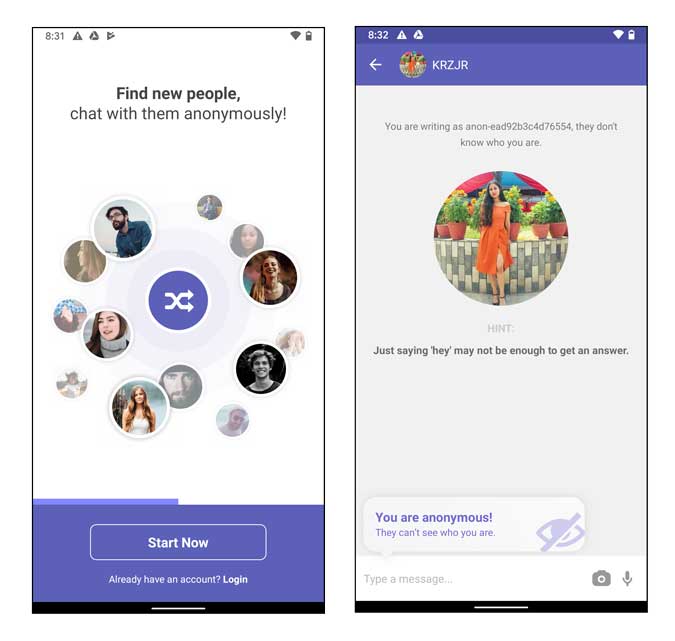 Whisper is one of the mort popular anonymous chat apps out there. It has a huge user base with a thriving community. If you are looking for meaningful discussions instead of sex and adult-related chats, Whisper is for you. Most users claim to have had meaningful conversations that had some kind of positive impact on their minds and behaviour.

You can whisper your deepest desires and innermost thoughts with total strangers without having to reveal your real identity. You can find people based on topics of interest and location as well. This makes it easier to converse because you know the other party is also interested. 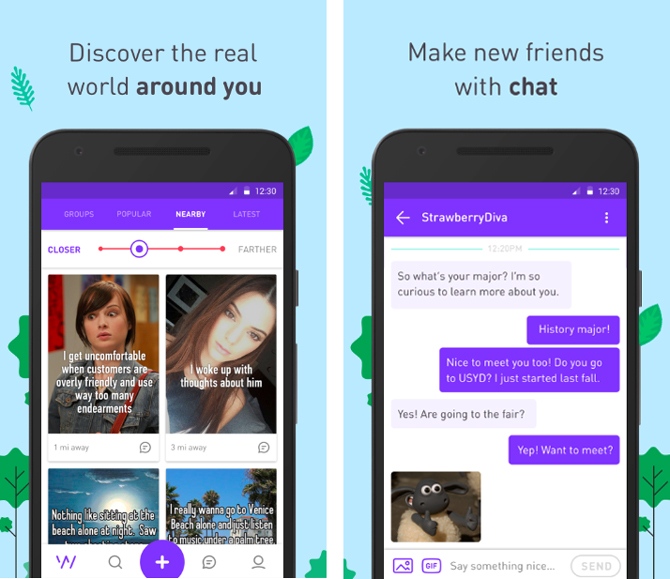 Best for people who just want to casually chat with strangers

MeetMe was originally intended to be a dating site, but destiny had other plans for the team. Today, MeetMe is one of the largest anonymous chat apps with a user base of more than 100 million. Apart from meeting amazing new strangers, there are features such as counting profile views you have received, the number of admirers you have, and gifts you have received.

The app also features some arcade and casino based games that you can enjoy with your new-found friends. Although it has a dating touch to it, it is an amazing app to meet new people and make new friends. You will like it. 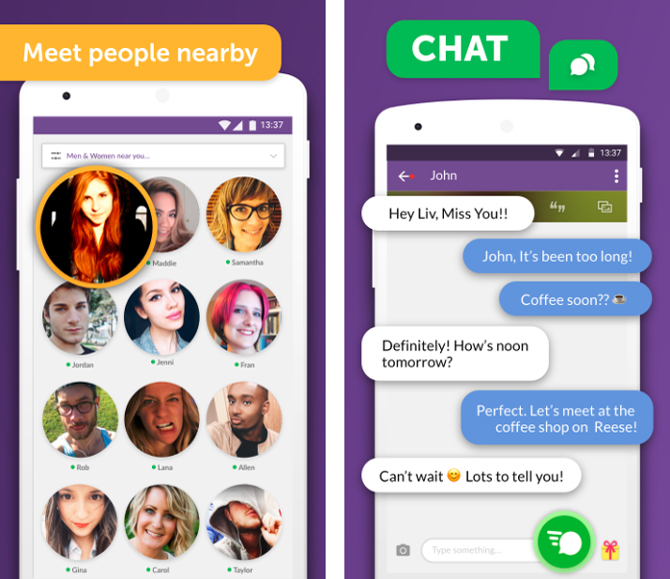 Frim is an iOS exclusive anonymous chat app that lets you, text strangers. Some of the features include asking questions, share, and secrets. The app discourages users from revealing their personal information, which is good if you are looking for privacy. The company also claims there are no bots in the system, which is a frequent occurrence in this genre. 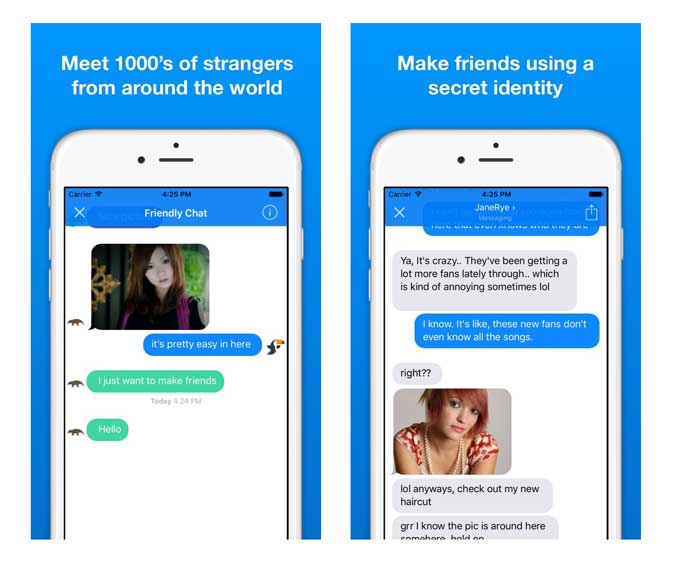 Best for Chatting with strangers around the world

If you are looking to chat with strangers and random people on specific topics, topics that you are passionate about and interested in, Chatous can help you. Sometimes, it happens that your friends are not interested in discussing things that you are interested in, leaving you wanting for more. Chatous works like Twitter wherein you can find topics using hashtags. Upon choosing the hashtag, you will enter a chat room and be able to chat with people who are also interested in the same topic that you chose.

All this happens anonymously and you can exit the chatroom whenever you want. It’s like Yahoo chatrooms but only better. Chatous will allow you to share audio, video, and images, and also share YouTube videos from right inside the app. It is one of the best anonymous chat apps for Android out there. 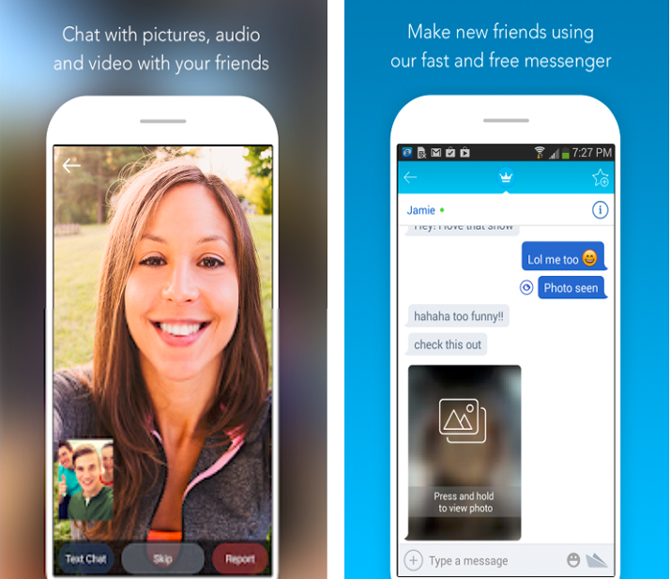 Best for Discuss movies and YouTube videos with strangers

Rave lets you watch Netflix and YouTube with your remote friend. But the reason to include Rave here is their public chat room feature. The app is not totally anonymous though. Once you install Rave, you need to create a free account and login to your Netflix account. Next, you’ll see various public chat rooms full of people watching popular Netflix and YouTube videos. Simply join a room and start texting while you watch. Or, you can create your own chat room for the movie you like and other people can join you. 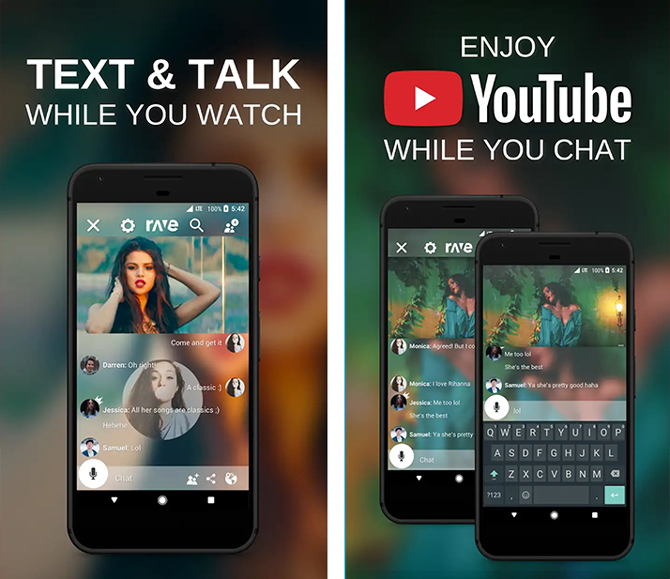 Telegram is synonymous with the word privacy. In fact, a lot of users have moved from WhatsApp to Telegram after Facebook took over the reins. There are several differences between the two. We already discussed the privacy part. You can search Telegram for groups by names even if you don’t know them. Just use the search bar which works like Google Search. You will see search results in real-time as you type.

Telegram has millions of users and is growing very rapidly. Plus, there are plenty of groups whose public links are shared freely on forums, websites, and social media. Like-minded people can easily share their views and opinions here. Each group has moderators who, with the help of bots, can dictate rules of the group, control nudity, profanity, and adult talks depending on these rules. 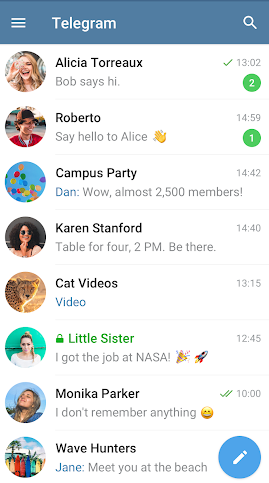 Anonymous Chat Rooms offers exactly that. A place where you can talk with strangers about random things in life. There is also room for dating if you are looking for that but most people are here for chatting. There are plenty of other apps for dating. Also, dating can never be anonymous, can it?

The uber anonymous chat app has a policy that says no bots, no names, no ads, history, spam, and violence. That’s a good policy to have which means the conversations are more friendly in nature leading to genuine people looking for genuine chats. There is also an option to report bullying or other forms of suspicious chats.

Whether you are looking for complete anonymity, chat apps, video apps, or meeting people in real life, there is an app for everything. We have taken care to showcase different types of apps that cater to different types of people, again with different needs. Let us know what you think, your experience, and if you know of any other good app in the comments below.

A C.A. by profession and a tech enthusiast by passion, Gaurav loves tinkering with new tech and gadgets. He used to build WordPress websites but gave it all up to develop little iOS games instead. Finally, he dropped out of college in the final year. He has over 5 years of experience as a writer covering Android, iOS, and Windows platforms and writes how-to guides, comparisons, listicles, and explainers for B2B and B2C apps and services. He currently divides his time between Guiding Tech and Tech Wiser but mostly, you will find him either gaming or streaming.