Home » Internet » 10 Best LG Smart TV Apps You Must Have

10 Best LG Smart TV Apps You Must Have 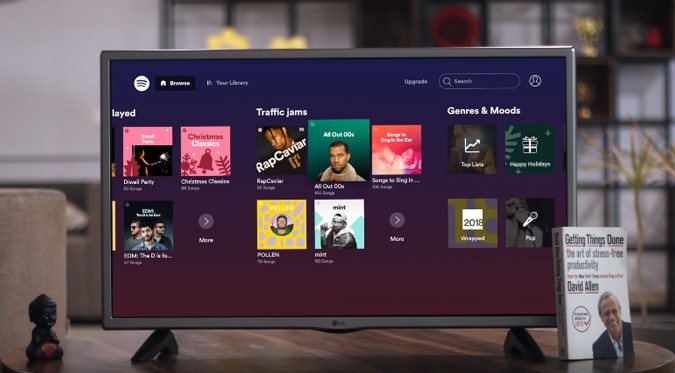 LG TV is one of the most popular smart TVs on the market right now. However, unlike FireOS or Android TVs, they don’t ship with huge app support. You do get the LG Content store with a fairly limited amount of apps. With that said, here are some of the best and must-have apps for the LG Smart TV.

LG TV has some of the most amazing screensavers and live wallpapers. The Landscape app on the LG Content store takes it up a notch. It provides 4k videos with a soothing ambient sound in the background. In all, it has 5 different scenes: Fireplace, Raining, Waterfall, Snow, and Sunset. In case you have a 4k OLED TV, it’s a must-have.

Similar to Landscape, Calm Radio is another source of calm and soothing music on your LG Smart TV. It has a huge catalog of sleep, meditation, relaxation, and nature music to choose from. Additionally, you also get a lot of classic channels like Mozart, Symphonies, Bach, etc.

Plex is a popular app for streaming content within your local network and one of the best apps for LG Smart TV you can get. In case you don’t know, Plex is a media server app. If you have a lot of offline content or DVDs at home, you might be better off converting a device into a dedicated Plex server. Thus, you can stream all those content using the Plex app on any device.

Duplex IPTV, as the name suggests, is an IPTV service that provides live TV and sports channels. There are a crazy amount of channels and you can have a look at the entire list to find your favorites. Duplex IP TV is a paid service that starts at $75/year. You can also get a 7-day free trial to test out the service.

Spotify is a must-have app for LG Smart TV. It lets you stream unlimited music and podcasts for free. Spotify also works well across devices in the same Wi-Fi network. You can seamlessly cast music from any device to your TV.

If you have kids around your house, it’s better to have the YT Kids app. The normal YouTube app has quite weird ads for kids. Moreover, autoplay sometimes might play an unpleasant video for them. Hence, you would be better off having the YT Kids app wherein the ads and content is curated for kids aged 1-10 years.

LG Smart TV already comes with a great air-mouse remote. But, in case, you lose it or can’t find the remote, LG has a great android app called LG TV Plus. It lets you control your TV over Wi-Fi and act as a digital remote. Additionally, it also lets you quickly cast your photos, videos, and music on the LG TV screen.

LG Smart TV supports Miracast rather than Chromecast for some reason. Hence, if you have an iPad or iPhone lying around, it’s quite hard to cast on LG TV. Often, you can cast within the YouTube iOS app but when you are in the Safari browser or other streaming apps, it’s tedious. So, to ease the process, you can use an app called TV Cast. All you have to do is download the app both on LG TV and on your iOS device, and you are good to go.

Time for some gaming apps for your LG Smart TV. Although LG Content store has very few apps, there are a lot of good casual games to play with. I usually play Flying Fish 2. It’s a fun game wherein you have to keep your fish floating and safe from obstacles.

Unlike Flying Fish 2, Words Online is a multiplayer word-building game. You can either play with your friend offline using the 2-player offline mode or, you can play with other players on the internet.

The apps on the LG Content store is largely dependent on the region. Although you can quickly change your region from the LG TV Settings, I might have missed out on some regional apps. Do let me know in the comments below and I’ll add it to the list.

Having said that, there are no ways to sideload apps on the LG Web OS store yet. So, if you are into that, you might be better off getting a Mi TV Stick or Firestick TV Lite.

Also Read: How to Get Peacock TV Outside of the US