8 Best Android TV Boxes to Get Before New Year 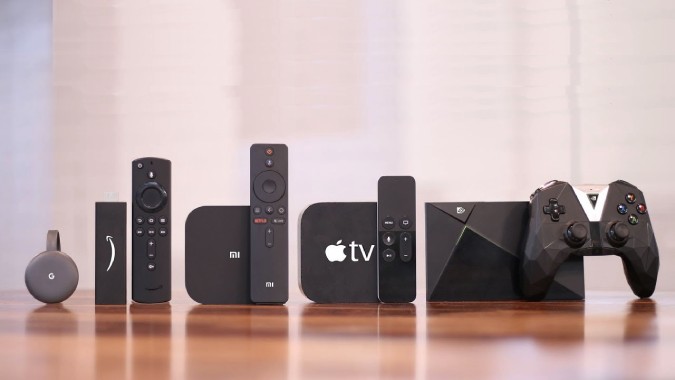 Android TVs are one of the best streaming platforms due to the sheer amount of app support it offers. Moreover, with the advent of Nvidia GeForce Now on Android TV and Google Stadia about to arrive in early 2021, it’s also a pretty good platform for gaming. The question is which is the best Android TV box for you?

But, the Android TV box market is full of legal and illegal streaming devices. If you are confused about what to buy, here are the 8 best Android TV boxes worth your time and money.

Moreover, Nvidia Shield TVs have a lot of tricks up their sleeve. You would be well-off reading my colleague Kaushal’s dedicated article on Nvidia Shield TV tips and tricks, but to give you a glimpse. Nvidia Shield TV provides 4k upscaling. It can upscale 720p content to 4k for your 4k TV. You can also build your Plex server officially on your Nvidia Shield TV. Additionally, you also get support for Dolby Vision and Dolby Atmos.

Google launched the new Chromecast in 2020 with an interface and a remote for the first time. In simple words, it’s the perfect balance between a premium Android TV box like Nvidia Shield TV and cheaper Android TV sticks. If you want the best Android TV box for streaming content and cloud gaming, Google Chromecast 2020 is a great deal for you.

It supports 4K HDR, Dolby Vision, and has a Type-C port. The Type-C port is OTG enabled and you can connect storage devices, ethernet port, or a whole array of storage devices and computer peripherals via an OTG extension dongle. Google Chromecast can even run Nvidia Geforce Now by sideloading. So, you can comfortably cloud game on the Chromecast 2020. Google has promised to bring Stadia to the Chromecast 2020 in the first half of 2021 if it stays alive.

All in all, Google Chromecast 2020 is the best thing after Nvidia Shield TV in terms of software optimization and early Android TV updates.

Mi TV Stick is more of like Firestick to the Android TV box jungle. It has a similar Firestick-Esque slim design that can hide behind your TV. The Mi TV Stick remote looks minimal with a Google Assistant button, direct keys for Netflix & Prime TV. My only grudge is the lack of a mute button and media keys like the Firestick remote.

The stick has a 2.0 GHz Quad-Core A-53 CPU and a Mali 450 GPU. In terms of Android TV gaming, you should give it a pass. The 1 GB RAM, bad thermals, and 8 GB of internal storage are too feeble to handle even Asphalt 9. In regular day-to-day Netflix and YouTube watching, the Mi TV Stick does the job well and can stream up to 1080p. The micro-USB port on the Mi TV Stick is OTG enabled. Hence, you can watch your offline content with ease.

The Mi Box S 4K is an upgraded variant of the Mi TV Stick with better thermals and extra ports. It costs around $36 more than the Mi Stick and $20 more than the Google Chromecast 2020. For that price bump, you get an extra USB 2.0 port and an Audio Out (3.5mm + SPDIF) port. Owing to that, you can directly connect your HDD and speakers directly to the streaming box.

The internals is pretty much similar to the Mi Stick. It comes with a 2.0 GHz quad-core CPU and a Mali 450 GPU. It does get 2 GB RAM, Chromecast Ultra, and 4K HDR support. So you can run Netflix on 4K as well as cast 4K content on the Mi TV box. However, the storage on Mi Box is limited to 8 GB only and you get around 5.5 GB to use. You can always extend it with the USB 2.0 port though.

The Tivo 4K costs the same as Google Chromecast 2020 and brings the same vanilla Android TV experience. It’s more of a competitor to Mi Box S 4K. Tivo runs on a 2.0 GHz Quad-Core A53 CPU and Mali-G31 GPU. It has 2 GB of RAM and 8 GB of internal storage. Do note that only around 4 GB is available for the user. Tivo supports both Dolby Vision and Dolby Atmos.

The Tivo Stream 4K comes with a Micro-USB and Type-C port. You can use either of them for powering up the streaming box and both of them support OTG as well. If you get the Tivo Stream 4K, you get a 30-day free trial of HBO Max and $30 off of Sling TV. Overall, the Tivo 4K is cheaper and better than the Mi Box S 4K.

If you need a streaming device just to run off Kodi, the MXQ Android TV Box is a good option. It runs a custom version of Android 7.1. The interface is just a scaled-up version of normal Android. Netflix and other OTT apps may or may not support 4K. It does have some sort of Widevine but not 4K.

The Android box does carry some beefed-up internals. It has 2 GB of RAM and 16 GB of storage. On top of it, you also get 2 USB 2.0 ports, an AV port, an Optical port, an Ethernet jack, and an SD card slot.

Pendoo H6 Pro is a powerhouse for an Android TV Box. In case you have a whole NAS setup and want a Kodi powerhouse, this should suit your need. The box comes with 4 GB RAM and 32 GB internal storage. Similar to MXQ, you get all the connectivity ports like Ethernet jack, SD card, 2 USB 2.0 ports, etc. It promises 6K HDR but I neither had a TV nor a streaming subscription to check that.

Similar to MXQ, it runs off a custom version of Android. You do get Google Play Store but installing Netflix and other OTT apps doesn’t work. You would have to sideload Android TV apps or use a third-party app store like Aptoide TV or APK Pure. Also, there’s no Chromecast.

The X88 Pro is somewhat similar to the Pendoo H6 Pro with 2 differences I could spot. It has a Gigabit Ethernet port. So, if you have a NAS or offline storage array, this would suit your networking needs. Additionally, it can run 8K. Again, I didn’t have the resources to check that. It costs about $15 less than the Pendoo H6 Pro. It would be a nice edition for your Plex server or Kodi setup.

So this was the list. I would highly recommend the Google Chromecast 2020 and the Tivo Stream 4K Android TV boxes. For a specific Kodi need, you should get the MXQ-4K or the X88 Pro X3. For more issues or queries, let me know in the comments below.