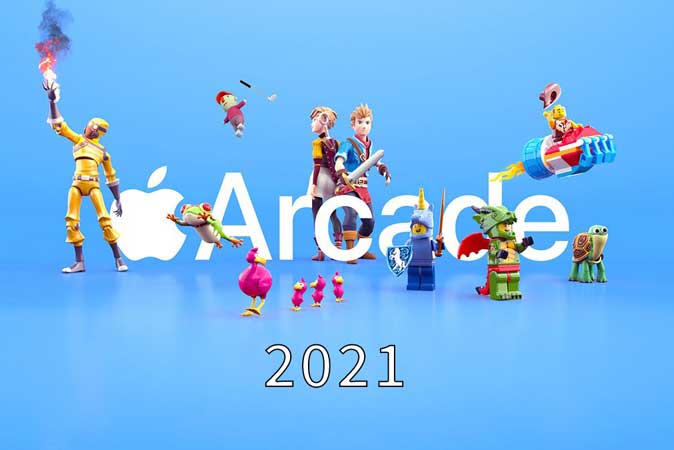 Apple Arcade has been an underrated gaming service ever since it launched in 2019. It has a wide variety of titles that are fun for the entire family and not just the kids. Whether you wish to play the games on your Apple TV, Mac, iPad, or iPhone, they pick up where you left. If you’ve just got the Apple Arcade subscription, here are some of the best Apple Arcade games.

Apple Arcade has added around 30 new titles in 2021 taking the total to 180+ games in Apple Arcade. I’d be covering the games that I enjoyed for this list. Most of the titles are paid, are already on the App Store, and super popular which means you can play all those titles with a single price subscription, instead of paying for each game. If you wish to check out some of the older games, here is a list of some timeless Apple Arcade games.

Threes is the original 2048-style game that was popular before 2048 clones flooded the market. The concept is similar. You play on a board with numbered tiles and merge same numbered tiles to form a bigger tile. You have to get to the highest-numbered tile possible. Thanks to Apple Arcade, there are no ads in Threes.

Mini Metro is a relaxing strategy game that flips the entire genre on its head and becomes chaotic fairly quickly. The objective is really simple. You’re the master who’s planning the city grid and it’s your responsibility to expand the network and prevent blocks. However, procedurally generated stations prevent you from building the perfect city but you need to last as long as possible. It’s really addictive.

Badland is an award-winning platformer that engages the user with its impressive physics engine and beautiful graphics. Story-wise, your objective is to walk through the forest and its terrible traps by being quick on your feet. You can play the game in the campaign mode with 100+ levels or call your friends and have a multiplayer four-way round.

Monument Valley offers a surreal experience with its innovative puzzle design, beautiful world graphics, and striking music. You play as Ida who needs to solve the puzzles and outsmart the Crow people. The levels are hand-crafted and inspired by minimalist designs, optical illusions, and heritage sites around the world.

Based on the infamous Fur trade route, The Oregon Trail is an immersive adventure Apple Arcade game that’s close to reality. The game takes you and your friends on an epic journey where you would truly witness the wild. You have to survive the blizzard, broken limbs, snakebites, and monitor your and your party’s health.

Get The Oregon Trail

Blek is a puzzler that offers a unique challenge. Your objective is to clear a level by scribbling on the screen. The line you draw would continue to move and should bump into colored objects. As you progress in the game, the levels become increasingly difficult and satisfying. You must try it.

You are the medieval monarch who sits on his throne and makes the decision for the kingdom. Instead of a complicated setup and comprehensive gameplay, Reigns offer a Tinder-style card-based choice that would progress the story. You are presented with a situation and you can go either way and make your decision by swiping the card. The ingenuity of the Apple Arcade game shines as the story takes you wherever you decide.

Fruit Ninja Classic is a fantastic slash and chop style game that would definitely take the edge off after a long day of zoom calls. The perks of playing the game with Apple Arcade is that you won’t get any pesky ads during gameplay so that you can truly excel at chopping fruits at lightning speeds.

Star Trek: Legends is an official adaptation of the hit TV show that we all grew up watching. It takes you to the final frontier on the USS Artemis where you lead the Away teams as any of the 40 characters from the franchise. The turn-based combats, choice-based missions, and an organic storyline are all fantastic and you really get immersed with the graphics.

The incredibly popular NBA by 2K games is now available on Apple Arcade where you would face off with giants like Kevin Durant, Steph Curry, Anthony Davis, and many more. The popular Apple Arcade game has 30 different arenas to play in and a two-player mode to challenge your friends. The updated graphics engine would ensure that your games run smooth as butter on every device.

Another cult classic makes it to the Apple Arcade best game list. The remastered version brings the same colorful puzzles where you cross levels by carefully cutting the rope so that the tiny frog can have its snack. The physics of the game is really fun making the levels even more exciting and if you’re a fan like me, you’d find lots of new easter eggs.

Get Cut The Rope Remastered

Fantasian is one of the most beautiful RPGs that you can find on an iPhone. The incredibly realistic graphics offer an immersive experience that is accentuated by the legendary soundtrack. The battle mechanics are phenomenal that is inspired by Final Fantasy and you can cleverly use the dimensional dungeon to take care of enemies. There are more than 150 dioramas that look incredible and immerse you in the game.

Chameleon Run takes a boring running Apple Arcade game and turns it into a fast-paced and gripping one where not only you have to run and jump over hurdles, but also change color relative to the platform. This small twist adds a lot of excitement to Chameleon Run that would keep you on your toes. There are only two buttons for control and that should be enough to conquer every level.

Simon’s Cat is a story-driven puzzle game where you would be heavily invested in the first minute, mainly because of Simon’s cat. The story revolves around a suburban neighborhood where a commercial building is threatening peace and tranquility. To progress the narrative, you need to solve puzzles such in a Candy Crush-style level where you have to fix the garden. You earn points that would unlock the next levels so collect away.

Don’t Starve is a survival game where you need to survive in the wilderness using your wits and the tools you find on the way. You would play as Wilson, a scientist trapped in a mysterious world. The Tim Burton-style world is ruthless and unforgiving. You need to find your own way as the game offers no help. It’s a real challenge.

These were some of the best Apple Arcade games that were added to the service in 2021. Even though Apple promised to bring original titles, I’m glad they’re bringing in popular classic titles because of how convenient it is to just get one subscription and not buy every game. What do you think? What’s your favorite Apple Arcade game so far? Let me know on Twitter.

How to Turn On Data Roaming on iPhone

How to Disable Always-on Display on iPhone 14...

How to Enable/Disable Power Button Ends Call on...

What Does SOS Only Mean on iPhone and...

How to Change the Date and Time Format...