Best Apps for Writing Scripts for Android and iOS

The last time I was binge-watching Netflix, I also had an epiphany to start writing short stories and documentaries.  After reading plenty of scripts particularly Chernobyl there was one peculiarity I noticed. Every script was written in a certain format which made me wonder why not just write in Wordpad and simply print it.  One reason is that a script is not only made, modified and read by a single person but many be it directors, producers, editors or agents.

But if you’re just planning to write for a hobby or want to experiment, you don’t have to install a separate app to put your ideas into text. Not technically, at least. So, open your note-taking app and just begin!

We use  Fountain Syntax, which are basically rules to make any text look like screenplay. Here are a few examples.

1. A scene heading will start with INT or  EXT (starting with a period) which denotes whether the scene has to be shot outdoors or indoors.

2. If you’re writing a character, you have to use all upper case characters. The very next line to the character will be considered as a dialogue with no line spacing between them

3. Adding a transition will be all upper case, with a blank line prior to and following it. It also ends with a CUT TO: text.

While I could go on and so and I don’t want to do that, so I’ll leave you with this link, which has all the rules if you’re really curious. Here’s an output, Enjoy!

Note: Remember you can just write in fountain but to convert it in a script you’d need an app to do so, while you can use Dubscript or Fade In to convert, here is a list of apps that can help you do that.

Now that you have a script, let me take some burden off to actually look for tools. So, here are the best apps that you can use that’ll make it effortless when you’re writing scripts.

One of the few apps that are famous when scriptwriting is talked about. It has a very simple UI and won’t even take a second to understand. Just sign-up and confirm from your email to access the app.

You can simply click the add icon to start writing your script. There is an option to choose between film, theater, and comic book format. So you’ve plenty of options to choose from. After giving the desired title, you can choose the screen heading and move further with the script by choosing pre-assigned formats for character, dialog, transition, etc. If the script is dialog rich, you don’t have to type the character over and over, rather simply choose from the character pop-up option. 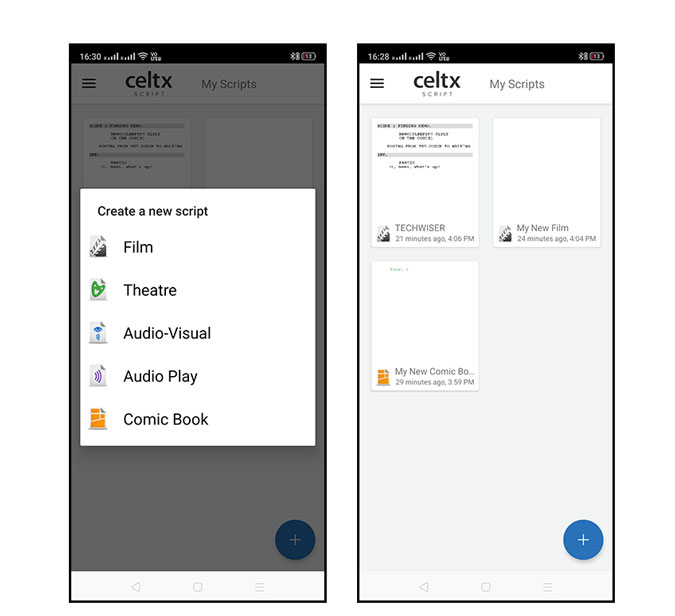 There is an option to add additional comments to the script and also view the scenes in list mode. On the top right corner, you have the option to convert the entire script in PDF format. I don’t always access the scripts on my phone, sometimes a laptop is more comfortable or an iPad, Celtx, is available on all the platforms and you can sign in and sync all your data in real-time. Support for spell check, being able to change the foreground, background and scene header color comes in handy to give the app a more personalized feel. It’s browser-based so it can be accessed from any PC. Additionally, it’s available for both iOS and Android.

Note: While users review on the Play Store have raised issues like character lag and frequent app crashed. I faced none of these issues while operating the app.

This is the lighter version of the same app. You don’t have to sign in so you can start using it straight away. It also has a minimal interface and there is a plus sign at the right corner to add new scripts. You get a plain canvas with all the formatting options at the bottom, like scene heading, character, transition, etc. An additional feature to define the text formatting is also there, so it’s easy to italicize, underline or strikethrough. 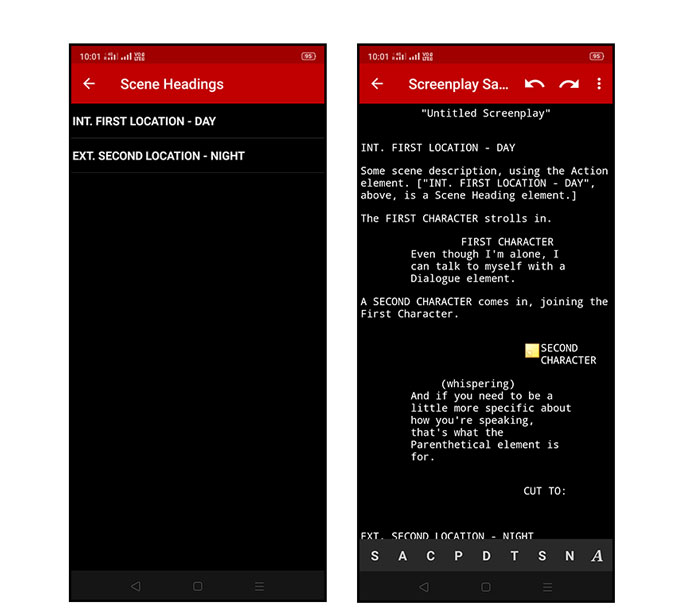 You can view the script in terms of scenes and also search through it. All the scripts can be saved in PDF and printed as well. In case you want to add personalized comments to the script. you can do that, this adds a highlighted icon wherever you add a comment. A quick option to change the theme to dark mode can also come in handy for people who prefer it.

In terms of settings, you can change the font from standard courier to others like American Typewriter, Lato, Monospace, etc. The app also gives quite a few options to change the appearance like enabling bold scene heading, changing page color and using full width in the landscape. You can also import or export your scripts to Google Drive, Dropbox, OneDrive so there are no chances to lose your data.

The full version of the app is available at $4.99 if you plan to use it professionally and want to import and edit your scripts which is a missing feature in the basic version.

It’s a good app if you’re starting out with writing your own scripts. It’s easy to learn and quite a few instructions are scattered all over. To add a new script you simply have to swipe right. You can either click and start writing a screenplay or simply read the scriptwriting rules if you’re beginning with it. 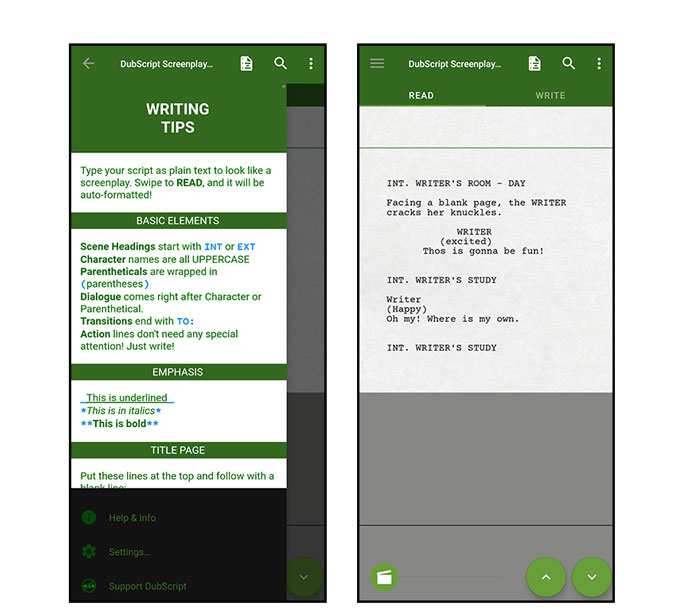 The app is essentially divided into two windows, Read and Write. Starting with the write section, rather than making you write in script format, you write in plain text which is automatically converted into script format. In addition to this, you’re also initially shown a sample script and a readable output. So you can easily tinker with it and see how it reflects.

The menu section is more like an instruction manual with details about the basic elements, suggestions and other formatting tips. Having these instructions available makes your workflow quicker. You can also open any text file in your local storage and convert it into a script. Sometimes you don’t want to look at your screen but rather want to listen and imagine the script, with Dubscript you have a narration option, that speaks the script to you.

Google Chrome can be another powerful beast with apps and extensions. Well,  YouMeScript is another one which can aid us in writing scripts on any PC with Google Chrome. You have to add it from the link below and access it by typing chrome://apps/ in the address bar. It doesn’t require a sign-in also there are no ads. So all you have in an uncluttered design to work with. As you open the app, you see a sample script that can be modified. 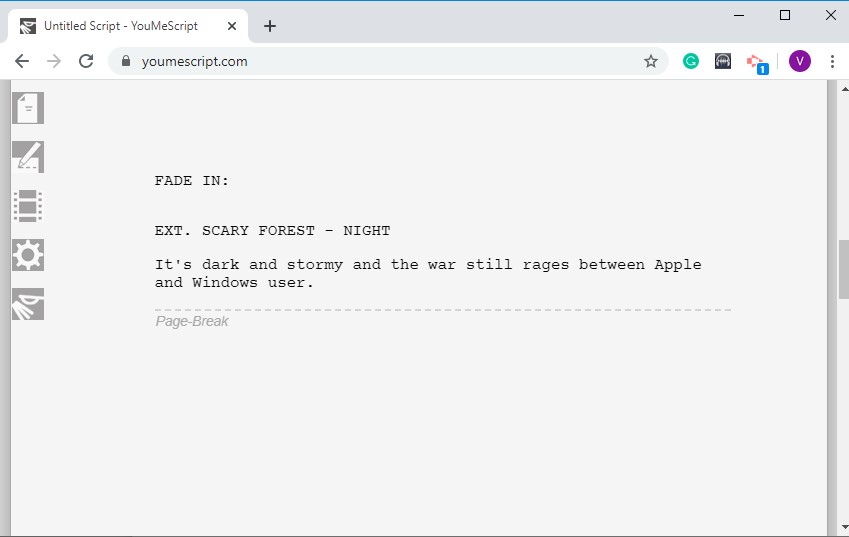 You can also import scripts in fountain and plain text formats. Moreover, you have the option to open or save your scripts in Google Drive which requires one-time permission. All the formatting and page options can be accessed from the left toolbar. In addition to this, there is also an inbuilt spell checker and dictionary which comes as added bonus.

The pro version comes at $19.99 for a year which gives you offline support, auto emergency backups, dragging GIFs, images and more.

Google Docs has made it so simple to work in a collaborative space. Chances are you are not only writing the script yourself but probably sharing it with others as well.  What if you could use your Google Doc and convert it into a script format. With this, you’ll have the familiarity and the ease of docs with the desired script format as output.

Simply use the link below and add the YouMeScript extension to Chrome. This will add it to Google Docs so you can access it from the add-on section at the top of your Docs page. After you’re done writing your script in plain text, with a click you can convert it to a script. It’s formatted in a fountain markup language. You might think, how will it differentiate between the heading, characters, etc, but using certain standard rules one can easily master using Docs and converting it to script. For example, writing the character’s name in bold or starting a scene with int. or ext.

Get Fountainize for Google Docs here.

I’m sure you can get tired of writing scripts, sometimes you just need a bit of space to actually take time and read. If, not that, then reading a movie script that you admire might help you get out of that rut. Oh! If you have an iPad, you might actually start to love reading scripts. 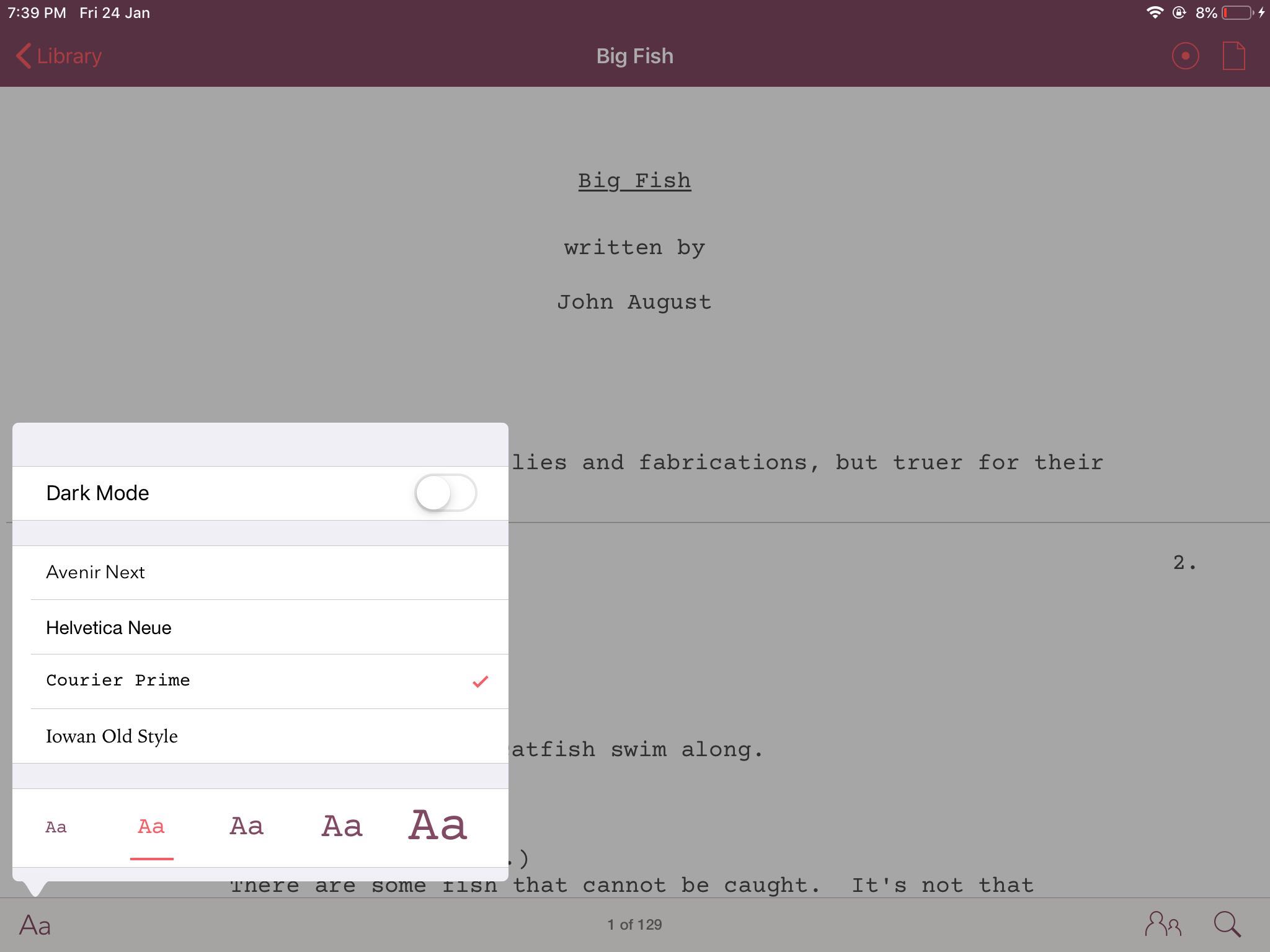 With Weekend Read, you can work with PDFs, Final Draft files and even plain text files. There is a quick toggle to switch between the original and optimized document so you read it with ease. Movies have long scripts and if you’re planning to read it on your iPad chances are you’ll have a lot of trouble switching between pages. In Weekend Read, you can scroll quickly with page jumper by swiping from right to left. All the scripts are saved offline but you can also upload it to your Dropbox. There is also an option to download files using a URL. In addition to that, you can change your font, choose the size of the text and enable dark mode.

The library can contain up to four documents, but if you’ve had your creative mind on a roll, you can upgrade to add more content at $9.99.

If you’re thinking of collaborative writing, you must have already heard of Writer Duet. You can open multiple projects in tabs and easily toggle between them.  All your projects are kept in a portfolio. You can simply start writing using the various options like scene, action, character from the toolbox at the top of the app. Formatting options can be accessed quickly with a tap on a keyboard like option at the top right corner. You can also open more line options and tools from the menu options. 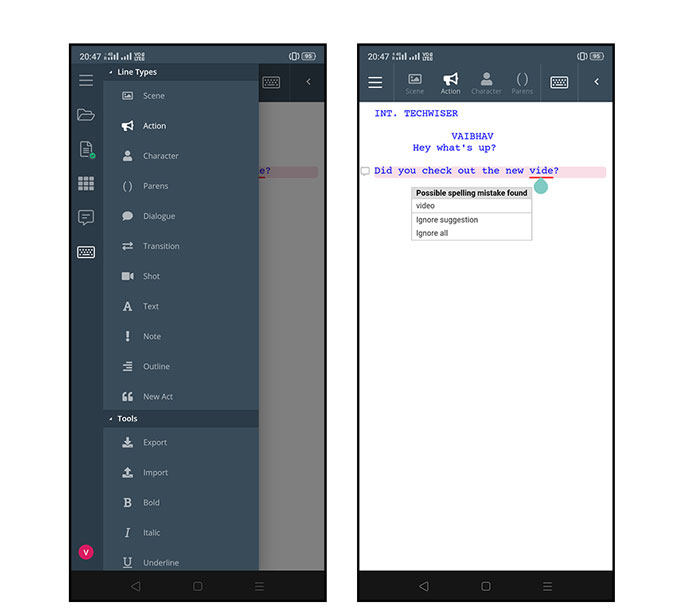 There is an in-built spell check option. Not only that, an option like a time machine lets you track changes made by multiple people and also view deleted text. Other extra features include the support to add images to the script from a URL.

But like I said the sweet spot of this app is being able to collaborate. so, you can join or invite others to collaborate with you with a private collaboration URL.

In terms of exporting options, you won’t be disappointed. You can export it to PDF, Fountain, Celtx, Rich Text Format and many more.

Get Writer Duet for (Android | iOS)

So, this was my list of best apps for writing scripts. To give you an overview, if you’re looking for a cross-platform option, Celtx is the best option that has both real-time synching and across platforms. Fade In is also a good option but the free version just lets you get a glimpse of the app, so if you’re just experimenting, you might want to try this. A lot of you might also be beginners, with a sample script and tips in the sidebar, Dubscript is good for beginners but is available only on Android. YouMeScript and Fountainize are both Chrome and Google Docs based if you don’t use these frequently, these might not be well suited. Well, if your focus is on collaboration, WriterDuet is the way to go even if it’s a bit hard to learn.