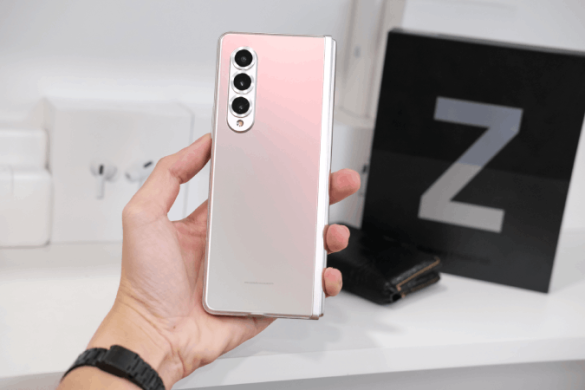 Samsung Galaxy Fold is one of the foldable smartphones that also got the software right along with the hardware. Also, most apps you download from the Play Store work great on the device. But there are a few apps that are specially optimized for Samsung Galaxy Fold phones or foldable phones in general. These apps take advantage of that big screen and features like Flex mode. Here are all the apps optimized for Galaxy Fold that you should consider installing.

First, let’s get all the Samsung apps out of the way. Samsung has optimized all its apps to work great on their foldable devices that include their Phone app, Messages, Notes, Internet, Clock, and even their Smart Things app. Except for niche apps like Good Lock or Samsung Members, most Samsung apps are perfectly optimized for the fold layout. Having said that, let’s start with some third-party apps.

YouTube comes preinstalled on the Galaxy Fold and it’s undoubtedly one of the best-optimized apps for the Galaxy Fold in many ways. First, it shows two thumbnails side by side instead of just one on the home and search screen. When you turn the device to landscape mode, it will show three thumbnails side by side. When you open a video in landscape mode, it leaves a sidebar on the right side to recommend videos just like on the desktop.

Most importantly, it also supports Flex Mode. So when you close the device halfway, it shows the video only on the top half like a laptop. In the bottom half, you can check comments, descriptions, and other video suggestions.

Well, I am talking about the new Google Meet app upgraded from Google Duo. Having said that, whether you are making a Duo or Meet call, the app works great on the Galaxy Fold. One major advantage is that it supports Flex Mode. So you can fold the device in half and place it on the desk like a laptop. Now you can see all the people on the video call in the top half and all the controls in the bottom half. With this setup, there is no need to hold the phone; you can simply place it on the desk.

Office also comes preinstalled on the Samsung Galaxy Fold. Unlike previous apps, Office is not specifically optimized for Fold nor supports features like flex mode.

But it is one of the apps that takes full advantage of the bigger screen the Galaxy Fold provides. It shows the full top menu and makes it easier to check or even edit the document. While other document editing apps like Google Docs are also optimized well enough for bigger screens, Microsoft Office is much better because of all the available options at your fingertips. On top of all, you can get a fold-specific Spen which works great on the Office apps like Word, Excell, and Spead Sheet.

Just like Microsoft Office, Teams is not specifically optimized for the Galaxy Fold. Unlike Google Meet, it doesn’t even support flex mode. But the layout of the app is much better to use on the Fold compared to regular bar phones.

The biggest advantage of Teams is when you are using the whiteboard. Unlike on other phones, you can use a whiteboard on one half of the display while checking your teammates on the other half. S Pen Fold edition makes the whiteboard feature an even better option.

Another Google product that works really well on the Fold is the Calendar app. While the day and week views are good, the month view layout is just perfect on the fold layout. Also, the month view is the default view on Google Calendar on the Fold device. That being said, the app’s menu and everything except the month view are not perfectly optimized for the Fold.

It is obvious that an app like Google Maps will work much better on the Fold than on any other phone just because of the screen real estate Fold offers. Google Maps does not really provide any additional features on the Fold but brings an optimized layout. Whether you are exploring the area around you or checking the directions, the map view is way bigger and clearer than any of the other normal phones. It gives a better bird’s eye view of the entire location around you just because of that massive 7.1-inch display that can be folded neatly in your pocket.

No need to install Google Maps as it too comes preinstalled.

You will appreciate the Outlook app once you have used Gmail on the Galaxy Fold. Though Gmail has an optimized version for tablets, the app on the Fold is just an extended version of the phone app. Outlook divides the home screen into two panes where you can see a list of all emails on the left pane and email content on the right pane.

It feels like you are using Outlook on the desktop. You can also change the size of each page easily. Not just the emails, even the calendar view is more adjusted for Fold’s layout.

Fold makes for a good ebook reader, even better than the Kindle itself and that’s saying something. The 3:2 display of the Galaxy Fold is perfect to read ebooks without any compromise. As the screen is wide, you don’t have to scroll continuously while reading like on other phones. As the device folds in the middle, it gives a more physical book vibe than any ebook reader in the marker. Not to mention the Fold display is much better and sharper than ebook readers.

To make it easier on your eyes, turn the display to Greyscale. To do that, open Settings > Accessibility > Visibility enhancements > Color adjustments. Here turn on color adjustment and select Greyscale below it.

Not just productivity apps, there are many games that work great on the Fold series. Among them, Asphalt 9 easily takes the cake. Mostly because of the optimized graphics and ease of playing. Though many games work great on Fold’s layout, it can be hard to hold a device like Fold and play for longer durations. As Asphalt 9 supports gesture-based controls, the experience becomes more seamless because there is no need to reach out for controls.

The only music streaming service that works great and is optimized for the Fold is Spotify. It adds a small sidebar on the left that helps navigate between menus, changes songs, play, pause, etc.

If you want to use a to-do app on Galaxy Fold, a good option is Microsoft To Do. I have tried many apps like Google Tasks, Todoist, TickTick, Taskito, etc. All those apps just expand their phone version of the app and create weird whitespaces everywhere. We understand that it is hard to switch your daily to-do or task app, but in case you wanted to use something that’s going to work well on your new shiny Fold phone, you should definitely try Microsoft To Do.

Considering the big canvas and support for S Pen, we cannot leave a paint app from the list of most optimized list of apps for Fold. We think ibis Paint X, Sketchbook, and Chip Studio Paint are well-optimized for the layout. Clip Studio Paint stands out because of all the brush customizations and many pro features like layers. Note that Clip Studio Paint is a paid app that gives you one-hour free training before purchasing. Anyhow, you can also rely on a sketchbook which also works great with the S Pen. Paint X is good, but you may experience some lag when using the S Pen.

Krita is another sketching app that is only available on the Samsung Fold. It is a desktop app and is more feature rich than any sketching app we have mentioned before. It also works great with S Pen. But it is a desktop app, options and controls are a bit smaller on the Galaxy Fold. However, it’s free and open source, so you can give it a try.

Instagram and Reddit are the most unoptimized social media apps for the Fold series. They make it harder to check feed images at a glance. That’s where third-party clients come in. Most Reddit apps are optimized for the tablet-style layout. Relay and Infinity are just my suggestions. You can also try Boost for Reddit which also works great on the Fold. But, I personally like to stick with Relay for the minimalistic look, whereas Infinity provides features like material UI support.

The Twitter app on the Fold isn’t that bad, but it is also not optimized. Though Twitter has a better layout on the tablet, unfortunately, it’s not the case with the Fold. Also, there is not a single Twitter client that is optimized for big screens. Compared to other Twitter clients, you can rank Talon to be better because of the user interface that is minimal just like Twitter. However, it is a paid app and costs $2.99. If you prefer to use a free option, you can try Owly for Twitter which also has a good user interface. While these options are not really optimized for the Fold, we can at least get something better than the native option.

When you have such a big display in your pocket all the time, it’s better to make it your second screen when you are using a laptop or desktop. The best app for that is Duet Display as it provides a lag-free experience, works across different operating systems, and connects wirelessly. It is a paid app and costs $9.99, but if you prefer a free alternative, try Deskreen. You only have a wired option to use your Galaxy Fold as a second display, but overall it is just as good as Duet Display.

Why play mobile games when you can play mainstream desktop games on your Fold? Try services like X Cloud and GeForce Now that allow playing desktop games on your phone from the cloud. You can connect a joystick to your phone to play and some games even offer in-display controls on these platforms. There are other platforms too like Amazon’s Luna, but there aren’t many games on it.

Just like Kindle, Fold also works great with PDFs. Also, just like Office, Fold is a good option if you need to edit PDFs. The app basically comes with all the features you would ever need on a PDF viewer and editor. You can also sign PDF files and comment on them.

Additionally, you can scan a paper and turn it into a PDF. The app also arranges the layout to work better on big displays.

You get a massive advantage when playing any shooter games on the Galaxy Fold. Most importantly Fortnite, Call of Duty, and PubG is some of the best games to try. Compared to other players, you will have a bigger field of view to navigate the map and shoot.

It’s Hard to Cover All Apps

Apart from what I covered above, there are many apps that work really great on the Galaxy Fold. Some are too niche to cover and some have few bugs like Google Keep. But overall, you should be fine with Samsung, Google, and Microsoft apps. I wish more photo and video editing apps were optimized for the Fold which is more useful than productivity apps and social media apps. Combine these apps with the multi-tasking features of the Galaxy Fold to get the real potential of the device.