Home » Internet » 8 Best Apps for Rappers on iOS and Android

8 Best Apps for Rappers on iOS and Android 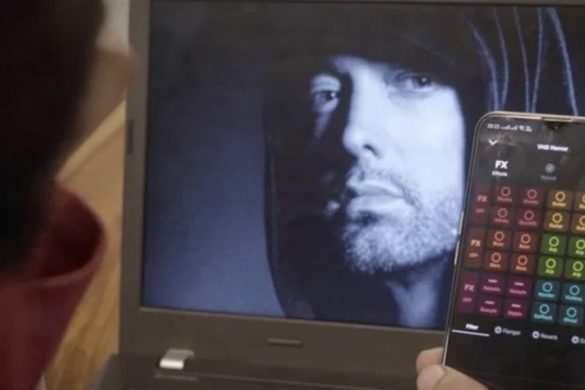 While most genres of music are based on both, a combination of words and music, the rap genre is focused more on words and storytelling. A rap artist has to focus on getting the right beat, a rhyme-scheme, and probably a good vocabulary to make the wordplay sound seamless. Perfection does take practice but there are tools that can aid you. So here are some of the best apps for rappers on iOS and Android. Excited to know more about them? Let’s start.

There are numerous tools that let you create loops, add effects, and also let you record. Groovepad is one such rap app that is easy to understand and start with.

To start making music, choose a pack or sound. For example, you can choose hip-hop, trap, EDM, Techno, and many such sounds. You can also preview the sound of each pack by clicking on the play button on the thumbnail. After you’ve downloaded the sound, it’ll show you different sounds in the pack which you can click and trigger. Remember, these are already in-time so you don’t have to bother about going out of sync. The app also lets you record and export the audio so you can use it with any production software or simply ideate using your music player.

In addition to sounds, you can also add special effects like flanger, reverb, and also add filters. If you wish to go through all recorded tracks, you can find them in the My Records section. The software exports in .wav format but you can choose mp3 to reduce the file size as well.

Every musician needs to write but rappers need to write a lot more. Lyric Notepad is one of the best apps for rappers to organize all songs in one place. I use this app for my songwriting but it’s equally good for rappers as well. You can use Google Keep or Evernote for real-time syncing but if it’s just the phone, you might want to give it a try.

Starting with the most important features, you get to see a syllable count on the left whenever you write a sentence. You have formatting options so you can easily bold, italicize, and mark the heading with shortcuts. Often, you want to add intricate details like how to pronounce a word or additional information that you need to share before the performance, this can be done with the notes sections easily. The recording option also comes in handy when you can record for each line separately.

Another important feature includes highlighting a word to find exact or near rhymes. You can also find synonyms and definitions within the app. So if you need a songwriting tool for rapping or any other genre, you know what to use!

When words are spoken in no structure, it’s called freestyle. For those of you already familiar, it’s a great way to grow as a rapper and get accustomed to different rhyme schemes. So the more frequently you do it, the better.

It works by generating a random topic to rap on with an instrument track. It is different from other rap apps as it suggests words and rhymes to help you continue the word flow. The UI is simple, and you can find a word at the top and the suggested rhymes in the middle of the screen. There are enough words to rhyme in addition to suggested phrases as well. You can choose the duration between topics and also record while you sing (still in beta).

Now you’ve lyrics and enough material to turn it into a song. You know how to produce a beat and have even practiced freestyle, so you’re almost an intermediate. But you need to record the song to put it out on the market. There are many mobile DAWs that you can choose from but because we need a simpler option and Bandlab works just fine.

It’s a multitrack recorder, so you can either record it with your microphone or import an audio file. In our case, a beat track to rap on. There is support to record MIDI instruments and even make loops. It can do everything a rapper might require. In addition to that, you can use the metronome, add a time signature and also add lyrics in the same tab. It’s super easy to export your song and save it on your storage.

We all are familiar with auto-tuning and we also know for a fact that a lot of hip-hop artists use it in their tracks. But auto-tune is expensive and requires proper know-how to process audio in such a way that it sounds good to the listener. But what to do when you don’t have any of those things?

Voloco is an app for rappers that fills that void and does the work automatically. Oh, here is how a cat sounds using the app!

You can start creating by tapping on the plus sign at the bottom of the screen. It will prompt you to wear headphones if you don’t want echo and voice delay while recording. Further, you can pick a key, choose from effects like chorus, noise reduction, natural tone or tweak the mixer. You can either choose a beat from your storage or add it from the Voloco Beats section.

I use Instagram to connect to friends but I also stumble upon a lot of new artists every day. While Instagram is not a musicians’ community, Rapchat lets you do that and connect with similar audiences and creators.

You start with getting yourself a rap name that is otherwise randomly generated. The app has three basic tabs – the first being the following tab where you can see the feed and activity of anyone you follow. Then there is the feature tab where you can listen to popular musicians and lastly, a beats tab exclusively for producers and someone who’s just trying to find a beat. You can like, comment, share content and also follow hashtags.

In terms of producing, you can download the backing tracks from the beat section and add a vocal track. There are also effects you can apply to your vocals like radio, chipmunk, cave, etc.

Rap battles are a cult from Eminem to Immortal Technique, it’s a culture that has contributed to every rapper’s growth. But with technology, you don’t need to be physically present. With Rap Fame, it’s easy to battle using just your phone.

Some dedicated members use it to battle but it’s equally easy to start even if you are a newbie. There is a hall of fame of top battlers according to total matches and matches won. You can also follow fellow rappers and call specific people in a game.

The history is well recorded in a feed. In case you don’t want to participate but just listen, there is a section for the best battles as well. In terms of battles, you can choose an opponent or let the app choose one for you randomly. You can either battle in audio or opt for video. You can listen to the backing-track any number of times and write the lyrics in the note-pad section in the same window. Other useful features include the option to fix the latency manually, filter with autotune and add reverb. So if you’re looking for the best apps for rappers, this one delivers a complete package.

BARS is a free rapper app introduced by Facebook recently. Although the app is free, it’s only available for iOS users and still in beta. It’s touted as a TikTok clone but purely targeted towards the rapping community. So if you have used TikTok before, you’ll be able to glide through the interface. A user can pick from professionally made beats and rap on them with their own lyrics. Since it’s based on a short format the video length is restricted to 60 seconds.

The app is still under closed beta testing. Hence there is a wait time once you sign up.

It’s laden with tools that’ll enhance your rapping skills. For example, you have a native rhyme dictionary that suggests rhyming words so you don’t get stuck. There are few basic filters such as clean, AutoTune, Imaginary Friends, and AM Radio.

Similar to TikTok, the app allows you to react to videos and watch trending rappers in the featured tab and the latest creations in the upload tab. Lastly, if you are serious about freestyle rapping, switch to the Challenge mode that auto-suggests your word to rap on.

Get BARS – Rapper’s Deligh‪t for iOS

Closing Remarks: Which Is the Best App for Rappers

All of these apps make a wholesome package for any rapper. From recording audio, producing beats, sharing tracks to freestyle rapping, the list has everything covered. You can also choose to install Rap Fame and Rapchat if you really want to grow and take rapping seriously.