Chess is one of the oldest and most popular strategy board game today. It has been around for centuries and has gone through several changes. The chess we know and play today has standard rules worldwide. It’s equally fun to play with other people and AI. Our Phones are capable of competing, even defeating us with just a few moves. Everyone has a different preference while playing chess, and we have a list of best Chess App for Android and iOS.

The best way to learn Chess is by playing it and even if you have no one else to play with, you have your Phone. Learn Chess is a tutorial app which teaches you basic rules and positions of the pieces.

This app would guide you through the basic elements of strategy, combinational moves, and methods of opening and closing. You get puzzles in this app which you have to solve, which are essentially a random part of the game and you have to solve it by making a legal move. The puzzles progress non-linearly to make it challenging. And if you ever get stuck while playing, the app offers you hints. 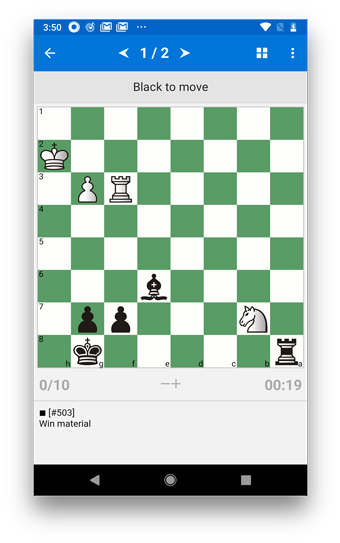 When you gain a little confidence with Learn Chess and are ready to play with real players, Move to this app and play against people online with this app. Chess is a simple Chess app which lets you play against your Phone with a varying difficulty level. If you don’t wish to play against something written on set rules, you can go online and play with other users or even your friends and compete in tournaments. 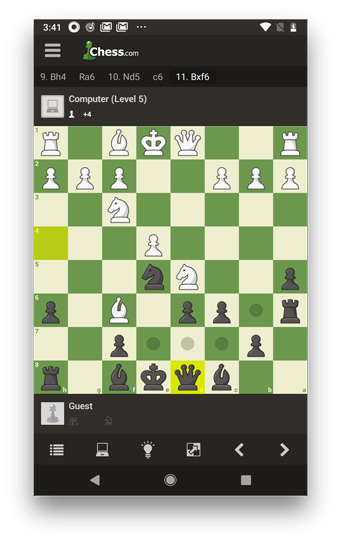 You can chat with other players while playing online other than that you can solve puzzles if you’re looking to improve your skills and it automatically adjusts the difficulty based on your performance. The best thing about going online is, the app matches you with people of your own ability by adjusting your skill rating. You can watch interactive tutorials from grandmasters and learn valuable lessons.

Okay now you’ve played with random players and even your friends online but now you’re at home and you just wish to play against each other. You can play on the Phone with each other it becomes a hassle when you have to give your phone to your competitor after every move breaking your concentration. Wifi Chess allows you to play Chess against your friend over a local Wifi (or mobile hotspot) network without the need for Internet. 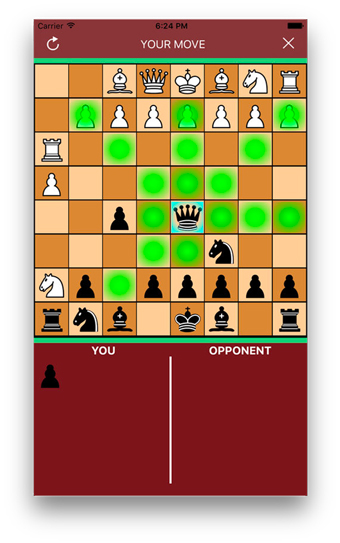 The UI is simple and you can even play on iOS with your Android app and vice versa. The apps are compatible with each other with choosing a layout before the game. You can even invite other players to play with.

Chess is a game of strategy and patience and some sessions last up to 6 hours in official tournaments. This can get boring when you’re not competing for a grandmaster title. Chess clock (another app from chess.com) is a Chess timer app which lets you run a timer for each player. You have to make a move quickly and press the button on the clock to stop your timer and start your opponent’s. This adds a challenge to the game and keeps you on your feet. However, you need to play the actual game on another Phone or a Chessboard. 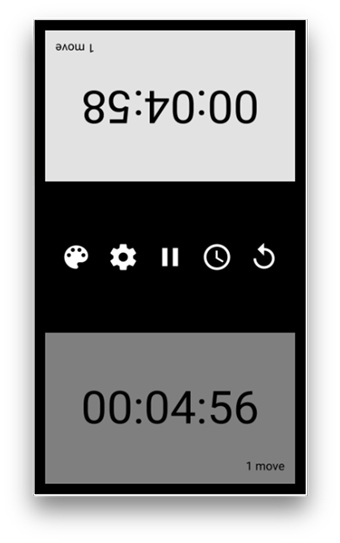 There are a few different modes 1m, 1m+ 1 seconds, 5m, 5m+ 5 seconds, etc. You can play in Blitz modus or Fischer Modus. Different Themes are available and you can create your own themes as well.

If you like everything open source, Lichess is the Chess game for you. Lichess is an online Chess app with which you can against opponents online. The community is ever growing with almost 150,000 users playing with each other. You can either play against AI or internet opponent 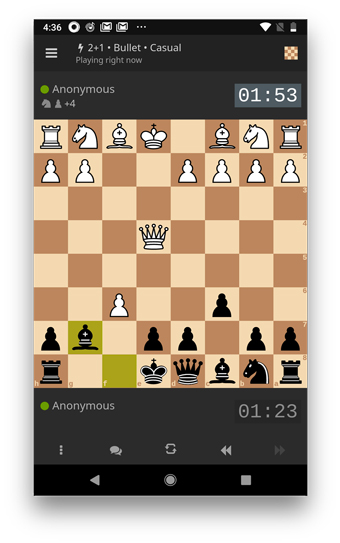 There are a few variants of Chess available both online and offline: Chess 960, classical, Crazyhouse, King of the Hill, etc. You can find, and challenge players online for a quick game. Your stats are built with every game and you can see your growth. It’s completely open source and ad-free.

Now, you have a decent idea how to play Chess both against real people and computer, it’s time to tweak it a bit with Really Bad Chess.

When you start the game, you are given a random board where you have the advantage over the other opponent. For example, you have 3 queens, an extra Rooks and bishops etc. It might feel weird at first, but after few moves, the board looks like any other regular chess game. The game becomes more difficult as your opponent has more key players than you. Like the computer may have 2 queens, while you have just one. Don’t worry you can still win, as the AI is not getting any smarter, it just has extra key players than you.

Overall, what I like about the game is, it helps you to break the stigma of regular chess. In a regular chess game, if one memorize the opening and pattern, it’s quite easy to beat your opponent. Real bad chess, on the other hand, demands a far better understanding of the game. 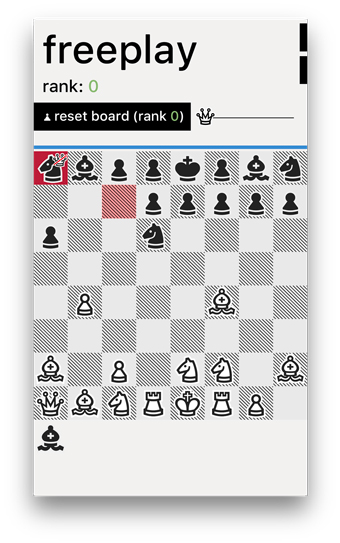 Wow, I guess you’ve mastered playing and winning a game of Chess against the computer and feel like its based on a few set moves which once you figure it out becomes easy to defeat? DroidFish Chess is based on a Chess Engine which is still like playing against a computer but a more advanced AI enabled with natural move-guessing algorithms. Droidfish is an interface for the Stockfish engine which is the king of all engines 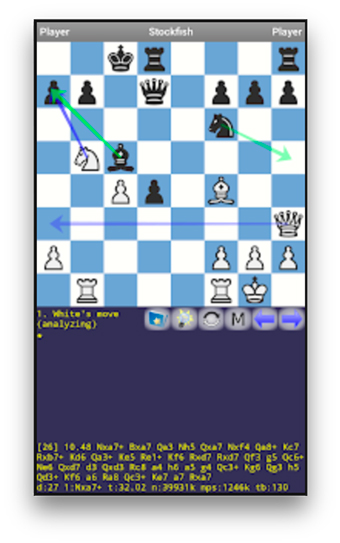 The app has many features like clocks, analyze mode, Blindfold mode, support for third-party engines, etc. This app would give you a highly immersive and engaging experience playing against an AI.

The game now features only one player option but you can expect multiplayer support in the future. 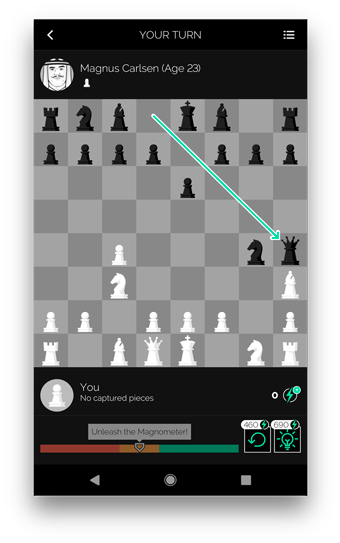 Probably the best looking Chess game in our list. Real Chess offers high-end 3d graphics and a fantastic gameplay. You can play against players online and chat with them. There are over one million users registered with the app. 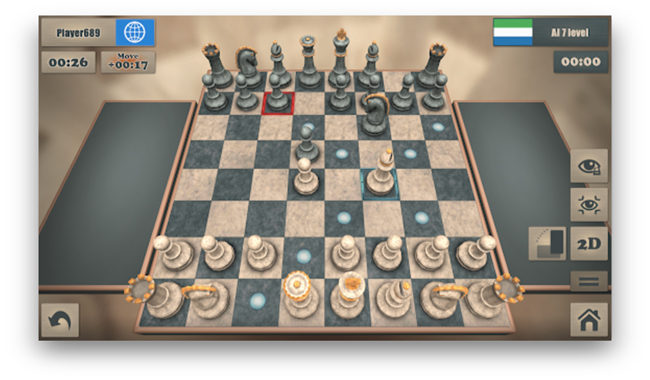 The game offers beautiful graphics and you can choose between 2D and 3D Chess boards. You get the option to play against an AI with 2400 different levels of difficulty.

I never learned to play Chess but Learn Chess helped me get started from the scratch and even helped learn a few tricks. Playing against people online is best on Chess and Lichess but Real Chess has the best graphics and gameplay. If you don’t find playing against the computer and its preprogrammed moves, go with DroiFish Chess and Play Magnus I’m sure you would have a great time playing against a Chess Engine that adapts to your moves. Tell us Which is your favorite Chess app. Let us know in the comments.