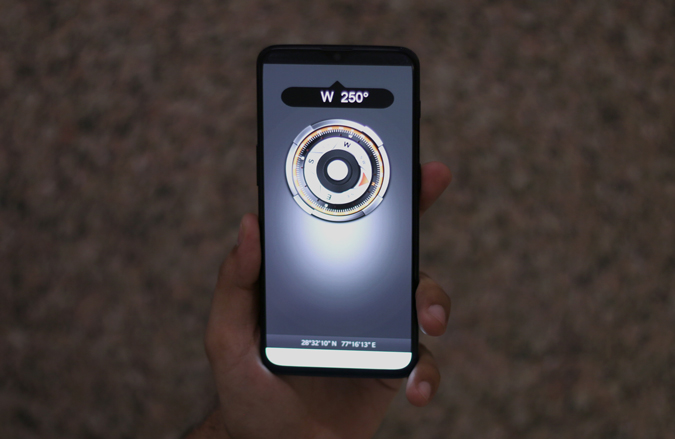 Compass apps are a must if you are an outdoorsy person and like to travel a lot. They become particularly useful when hiking or on wild forest trips where the signal is often low or non-existent. While you can always a cheap compass from Amazon, why not use your smartphone’s accelerometer and magnetometer instead?

The small magnetometer fitted in your smartphone is strong enough to detect Mother Earth’s magnetic field. This is how the device knows in which direction the North lies. Your smartphone will then use the accelerometer sensor to determine it’s position in space. All this information is collected in real time and used to provide cardinal directions to you. Cardinal direction is nothing but the four directions which are North, East, West, South. I believe this is how the word ‘news’ was formed because it means you get to know what’s happening in every direction around you. Or is it News, Events, Weather, and Sports? Go figure.

Here are some advantages and disadvantages of using compass apps compared to physical compass and GPS devices.

Let’s take a look at some of the best compass apps for Android and iOS smartphones now.

Also Read: Now You Can Share Your Real-Time Location with Google Maps

Check if you already have one

If your smartphone has a magnetometer, chances are that your OEM has included a basic Compass. All the major OEMs like Huawei, Xiaomi, Samsung (flagship Galaxy devices), and even iOS have a Compass app built in. Just search for the app with the name ‘Compass’. Android smartphones with stock Android UI skip this feature and therefore you need the apps below.

The first app in the list is an open source and free Compass app which would check all the necessary boxes. It is simple to use makes use of internal Magnetometer. It has a clean UI with a huge Dial in the middle of the screen. Not only it shows you the accurate magnetic position but exact geographical coordinates as well. You can use it to hide your potential loot and never lose the location.

The app is great if you’re looking for a simple and clean app. It is not available on the Play Store, therefore you would have to download it from F-Droid for Android.

For some reason, the developer has decided to name the same app differently on the App Store and Play Store. On the later, it is called Spyglass. The app will let you save your current position so you can track back to where you began. Saving points is easy. You can not only save multiple points but also track them at the same time with distance, direction, and elevation info. 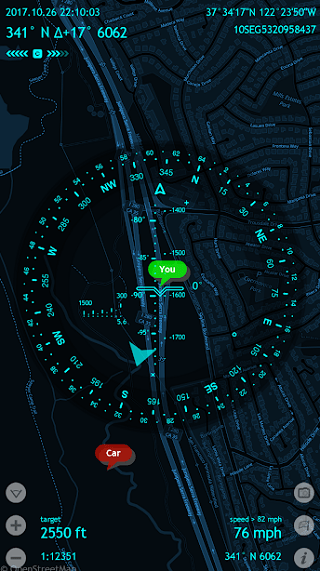 In the old days, our ancestors used the position of the stars at night and the direction of the sun during day time to navigate and find their way across forests and deserts. Most of us don’t know anything about stars except that they are beautiful. Commander Compass Pro tracks the position of moon and stars to calibrate compass for max accuracy.

The pro version will cost you $7 but add features like the ability to overlay compass maps to visualize, track the solar system, and built with military compliance.

Most of us use Google Maps as our default navigation app when in the city or on the highway. Compass Coordinate works with Google Maps which makes it easier to use and work with. You can also retrieve the coordinates of a specific location on the map. Useful for sharing with others. Because it uses Google Maps, the name of the location is pulled from Google Maps too. 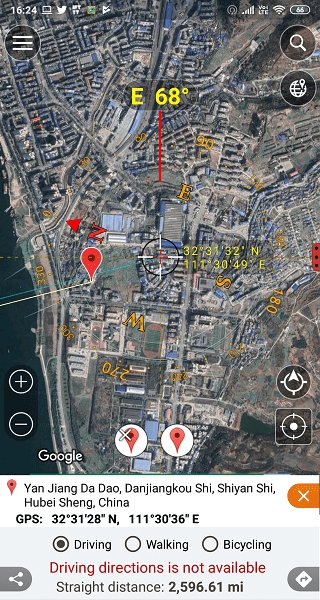 Compass coordinate comes with different themes and map layouts to choose from. You can keep the screen on while using the app, zoom or push marker, and customize text, unit, and even color. You can remove ads with an in-app purchase.

The only reason Speaking Compass made the list is because it is also the only compass app for Android that is built for users who are visually impaired. As you can guess, the app will speak the directions out loud helping you make a better call on when you turn.

The directions like East 45 or 97 degrees Northwest will be announced several times so that if you miss it the first time, you can listen to it once again. The app takes a minimalist approach with no fancy features anything. This is obvious because it is targeted towards those who have difficulty viewing. There are no in-app purchases or ads, the later one makes sense, obviously.

Not everyone needs a feature rich compass app. Not everyone likes to give too many permissions just to know their location on a map. Compass Galaxy is a very popular compass app for Android that does not ask for unnecessary permissions. There is no in-app purchase either. 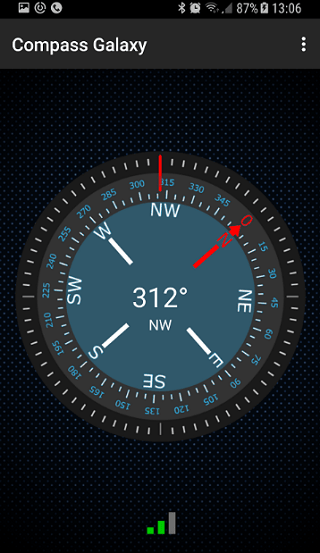 Launch the app to know your exact position on a digital compass with degrees and direction. Enough for some people, I guess seeing so many people recommending the app everywhere. The app comes with ads but there is no way to remove them.

Note that you will have to draw an 8 while the app is open to calibrate the app. When done, you should see 3 green bars at the bottom of the screen. For some reason, the developer forgot to include this instruction.

If you are an explorer and an adventurer at heart and looking for something more, this is it. Digital Compass not only shows the North but also plots it on a map with the direction that you have decided to go towards on it. In fact, some large and medium cities from across the globe are readily accessible through a drop-down menu.

Read: How to Predict Traffic on Google Maps for Android 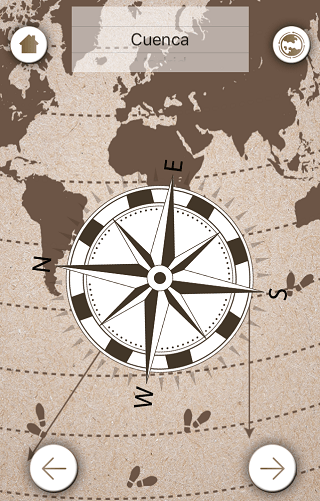 With more than 10 different compass options, the only drawback is that Digital Compass is only available for iOS devices. On the plus side, it is a really good app for navigation, mapping, and orientation. The app is free to use but comes with ads which you can remove with an in-app purchase of $1.99.

Compass Steel 3D is exactly what you think it is. A steel color compass that works in 3D environment that shows you direction and orientation. Apart from the magnetic North, you can also view true North. Like others, it tracks the position and direction of the Sun, Moon, and shows times of sunrise and moonrise. 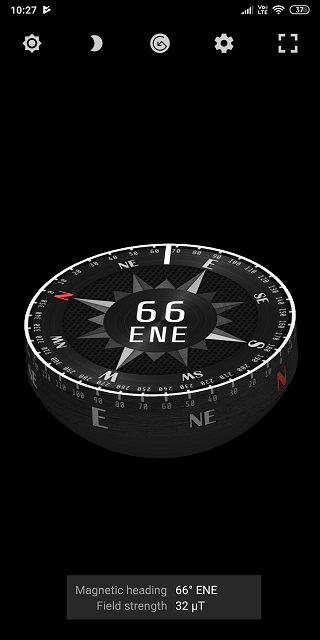 Compass Steel 3D’s design was inspired by the marines. It kind of makes the compass float in mid-air which gives it a nice look and makes it aesthetically pleasing. The compass app for Android is free from ads and there are no in-app purchases whatsoever. The only thing you need to keep in mind is that you may need to calibrate it frequently.

Compass does away with not only fancy names but also fancy layout. In fact, the app is so minimalist, you will like it immediately. After you have calibrated the app by drawing an 8 figure by moving your mobile, you will see nothing but a letter in large big font displaying the direction. Below the directional letter, you will see the degree in a small font. That’s it. 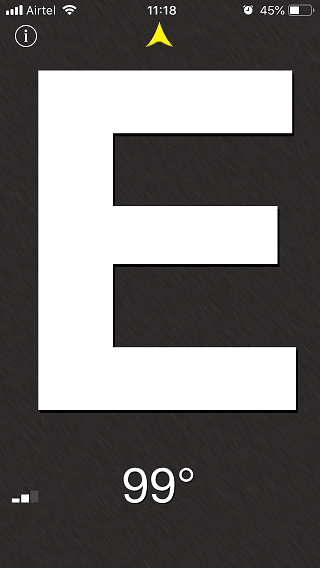 Another compass app for Android smartphone owners who love 3D effects. This compass will always stay parallel to the floor no matter in which direction you move your device. There are a number of themes to select from but my favorite is the black one on a white background. Looks classic and easy to view in the dark. 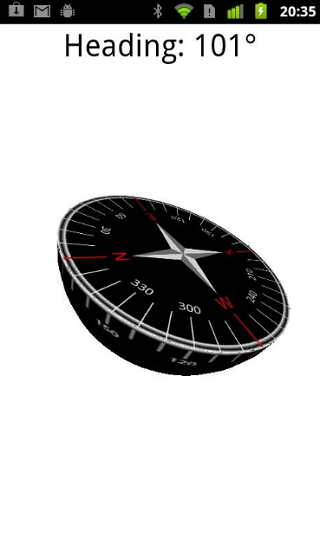 It also comes with GPS support so you can pinpoint your exact location on a map. What’s more? GPS means the compass will offer more accurate feedback than other compass apps that solely rely on the magnetometer and accelerometer sensors. They have been known to be inaccurate at times when compared to physical compasses.

The good thing about this app is that it is completely free with no ads and does not ask for unnecessary permissions.

Compass Apps for Android and iOS

So these were some of the best compass apps for Android and iOS smartphones. As noted, these apps are really good but if you are looking for accuracy, I would suggest one that also uses GPS of your phone, just in case. Also, note that no app can be as accurate as a physical compass unit which is the most accurate.