Best Drum Apps to Get Good at Drumming

Back in high school, I really wanted to learn drums. But I didn’t buy them, for one sole reason – They’re super bulky. This issue makes it a hard beginner instrument even if one is really passionate about it. So, whether it’s your long lost dream or you just want to make beats, downloading a drum app makes more sense.  You escape the expense plus you always have a virtual drum in your pocket. So here are the best drum apps, you can install right away!

Best Drum Apps to Get Good at Drumming

1. Learn How to Play Drums

All these apps make playing drums sound easy. But you actually need to know the basics to be able to understand how everything works. Learn how to play drums, as the name suggests, teaches you to play drums via animations instead of letting you actually do it.  The app gives you six genres like Rock, Jazz, Blues, Funk, Latin and Fusion to choose from. The tutorial UI is spread in two parts, one being the staff notation and the other being a real drum. After choosing the genre, you choose the difficulty level. After you choose the difficulty level, the app shows you the music being played on the drum via animation in real-time.

Although it isn’t a drawback, I wish this app had better UI. Also, if they could add a drum that can be played along with the staff notation, I’d gladly keep this app on my phone. Nonetheless, it’s a good app if you want to get into the head of a real drummer, but remember the key to getting better is always practice! 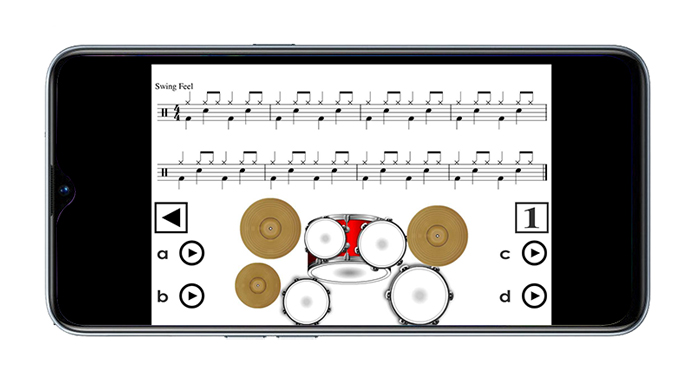 The first question that comes to my mind when I think about a drum app is “How close it is to a real drum set?”. Simple Drums Rock, not only has high ratings on the app store but it is able to simulate real drums with near perfection. To give you an idea, you get all the parts of a drum, like double bass, snare, multiple cymbals, etc. Tapping on individual drum parts lets you create the desired sound. This app also lives up to my expectations as the tap to sound delay is non-existent. Therefore you get a very quick touch response.

In case you are someone who loves custom sounds like rainfall, bird chirps, etc. You can replace individual sounds with whatever you like. Hence, you don’t have to be restricted to the six drum options you have and with a single tap, you can reset it all back. Although the basic version of the app is sufficient for most, you have the option to remove ads at $2. 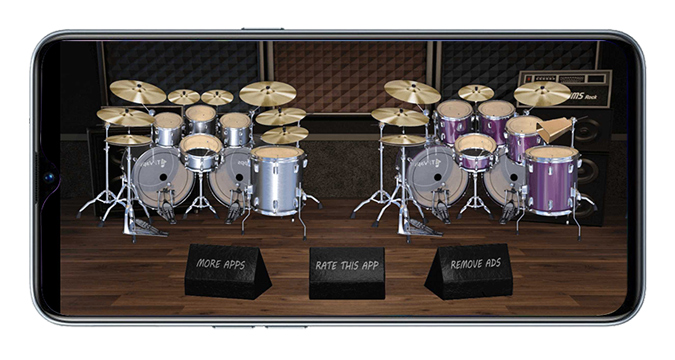 Unlike Simple Drum Rock, Real Drum is present both on Android and iOS. However similar to the previous app, you get a drum-based UI and the option to record the sound. The feature that takes makes this better than the previous one is drum kit options. This basically means that changing the standard drum kit will not only make it look but sound different. For example, a standard drum kit can be swapped with jazz or death metal sound. Besides the standard drumkit, a new kit is updated every week, so you never run out of fresh sounds. and even looks (Ahm). On top of that, you also get peppy drum skins and sounds ranging from pop to death metal.

This app has a great UI with some features missing like the volume for individual drum parts. You’ll also be annoyed with ads whenever you change the drum kit. So, I highly recommend paying $2.5/month to remove those and have an extra metronome feature. 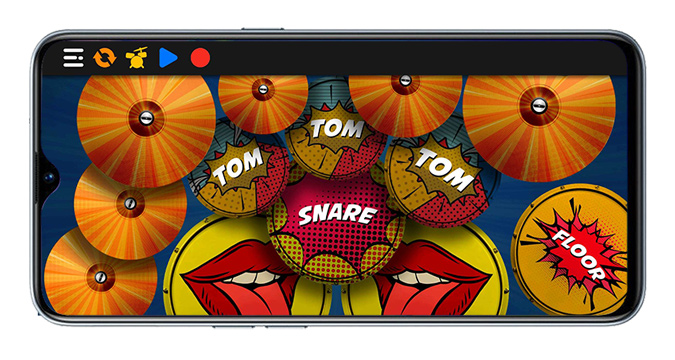 If you don’t want to play drums but still want to give beat making a shot, the Drum Pad Machine is a good option. When you open the app it shows you colored grids with single tiles. Tapping on the tile which is in the same color scheme will give you similar sounds. These sounds are designed in such a way that whichever tile you click plays it in a rhythm, so you will sound good with any permutation and combination. If even that doesn’t instill confidence, you can learn basic beat-making with the tutorial section.

What I like the most about the app is its ability to change the sound in the entire grid. So whether you’re interested in Hip-hop beats, Trap music or EDM, you can experiment with them all. I personally suggest trying the app first regardless of the ads. If you get fluent making beats, the Pro version comes at $12/anually. This not only removes ads but gives you access to all the sounds and packs that are updated every week. 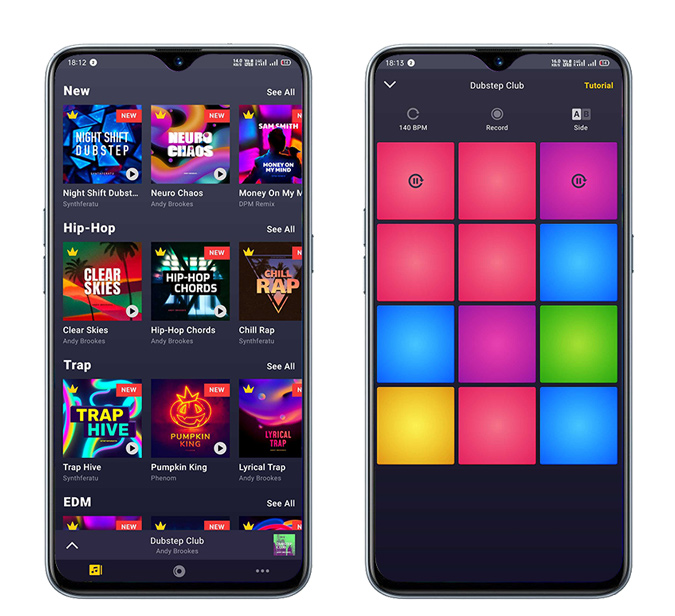 While the previous app gives you loops in the form of grids you can play yourself. This one already has pre-made grooves which can just be played as loops. So, you’re dealing with repetitive sounds(loops) and grooves(feel of the sound). It can anything from rock, death metal to indie and pop. You can practice playing a real drum along with the loop or use it with split-screen with other real drum apps.  The app is not just restricted to patterns. You can change the tempo of any given loop. If you have any other instrument, let’s suppose the guitar. You can choose from different styles of music along with the time signature.

The app doesn’t come with intrusive ads but features that can help you practice like tap tempo and automatic BPM speed will set you back by $4.

Read 8 Must-Have Apps for Every Musician 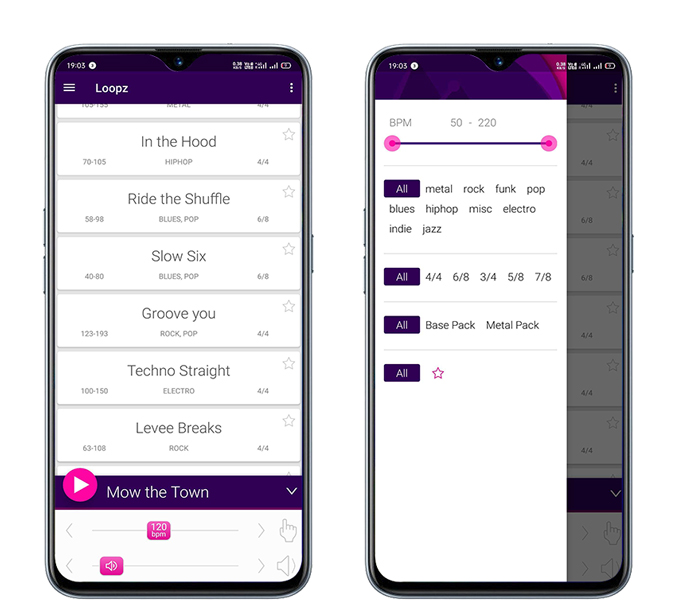 We hear guitarists adjust their knobs after every song. Similarly, Drums need to be in tune to be able to match the pitch of other instruments. A handy drum tuner app lets you do the same. It asks to create a new account but you can sign in with Facebook straightaway. You start by choosing the type of drum. Then play the drum for the app to detect the fundamental tone and the lug pitch. You can further set this as a target pitch and tune the lugs accordingly. You can also change the sensitivity depending on the ambient noise level. It’s extremely convenient if you’ve multiple drums or if you play for multiple bands as you can save multiple kits and choose from predefined presets.

The app isn’t free so you get a full-fledged seven-day free trial after which you have no option but to upgrade at $7.99 else it’ll be deactivated. 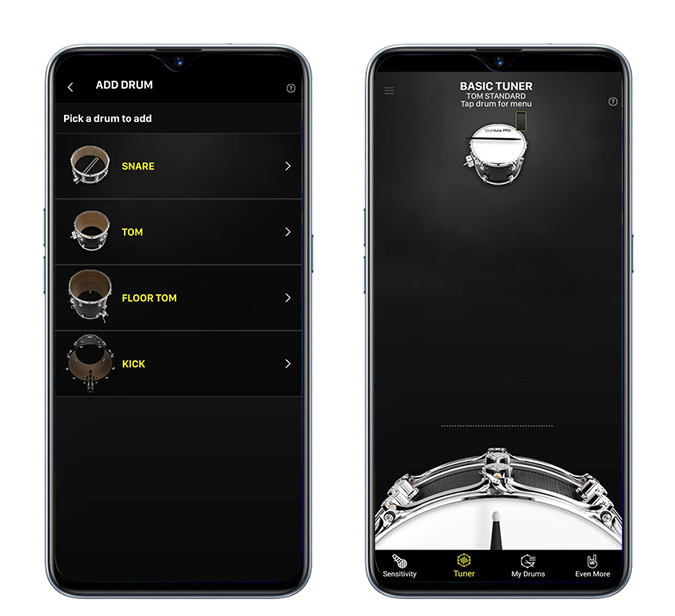 Everyone loves a vintage vibe. Sounds that are not only glitchy but have technical flaws such as background noises and hums. If you’re particularly interested in creating a Lo-Fi drum sound, Dragon Drum Machine is by far the best I could find. There are three drum synths, namely bass, snare, and a hi-hat. You can easily create a unique sound as all of these drums have individual sequencers and the effects are also independent. For example, you can have an extreme delay on the bass and snare but have a low intensity on the hi-hats.

There is a global effect control as well with tape distortion, bit-reduction, reverb, etc. So you can sculpt the sound in real-time. If you are familiar with sequencing or you have a little bit of knowledge about rhythm, you can undoubtedly create unique sounds. But if you want to save the project and record it live, you will have to upgrade to the full version for $2.5. 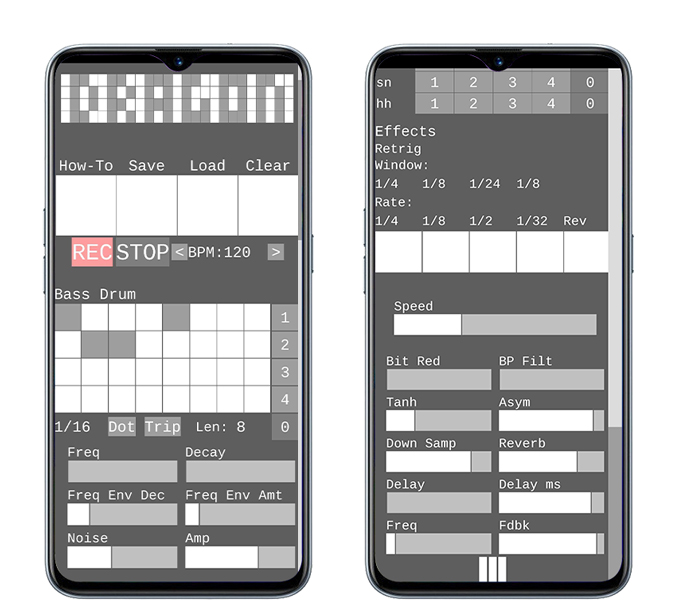 If you’re serious about learning drums, I suggest enrolling in formal drum classes. If you just want to try your hands on it, the Real Drum app is a great option. For someone who wants to produce beats and experiment with multiple sounds, Drum Pad Machine packs up a lot. You can even record and set the tempo which is great if you are a singer-songwriter. Drum Tuner and How to learn guitar are great but you’d only need them if you have a drum or you want to figure out how drums actually sound along with a song.

With that said here were the best drum apps, if you’ve something that you think should get on the list, do leave a comment!

Best Apps to Blur Faces in Photos and...