There is no shortage of green screen apps for Windows and Mac but when it comes to smartphones, you don’t find good ones. Out of the few handpicked ones from the app store, most of the apps don’t work and when they do, it looks quite unpleasant. So, here are some of the best Green Screen apps for Android, iPhone, and iPad which work and give you the same result as on desktop.

How do Green Screen Apps Work

Green Screen Apps as the name suggest replaces the Green Background with a custom video or a custom background. These apps detect a single color and cut those color pixels out of the video. The key to getting a proper green screen replacement is to have uniform lighting on the green screen. You can even use any other color instead of a green screen. It just has to be uniform. Following is a good example of a uniformly light green screen. For more clarity about green screens basics, watch the following video.

You have to choose the color of your screen. Usually, it’s a ‘green’ color but you can also choose between blue, red or yellow. Next, you have to choose a dummy image. Now, Chromavid will let you assess your green screen live. You can either record the activity or just have a live preview of the green screen replacement. Due to its instant share option, Chromavid can also be used as a social media utility. Suppose, you are making a green screen YouTube video or commercial and want to share a short glimpse of things on Instagram or Snapchat. You can quickly edit the green screen of the same setup and post it to Insta.

Chromavid is a great utility rather than a full green screen editor. The replacement process is pretty straight-forward & slick but I would have loved the option to replace the green screen of existing videos.

PowerDirector is an all-around video editing software for mobile but it leaves a watermark on the footage. You need to upgrade to the premium variant to remove the watermark. The premium version is subscription-based starting from $4.08/month.

Kinemaster is another popular mobile editing application for creators. Unlike PowerDirector, Kinemaster is available for iOS and iPad devices as well. The app UI is similar to that of PowerDirector with the timeline at the bottom and controls to the left.

I would rate Kinemaster as better when it comes to Chrome Keying. The only drawback Kinemaster has is that it doesn’t have a custom color picker. You have to choose from the range of colors available. It’s not a drawback but makes me browse the entire RGB model to pick my color. It would make choosing color much easier if it had a color picker tool.

After keying in your color, Kinemaster gives a whole set of options. You can choose the detail of the subject in the green with the help of a Highlight/Shadow curve. You can choose the opacity and harshness of the chroma keying with the help of the slider. Also, you can enable mask which gives you a Black & White view of the video. This helps to edit the harshness and opacity of the chroma key better.

Kinemaster is the epitome of mobile video editing apps. The only downside is the free variant is that you get a watermark on the exported video. This could be removed by upgrading to the premium variant which starts at $4.10/month.

Stop Motion Studio is a novel app on this list. It is less of a green screen replacement and more of a stop motion creator. We have a Step-by-Step guide for Stop Motion, you can go through it for better clarity.

Stop screen Studio gives you a live preview of the green screen replacement while clicking the photo itself. So, you can ideally arrange your shot during the click itself. This cuts down the additional process of coming back from editing and correcting the picture. You can also directly export the video to YouTube or save it to memory. However, the highest export resolution is 720p.

Read: How to Make Stop Motion Video on Android and iOS – A Step by Step Guide

5. Green Screen by Do Ink

Green Screen by Do Ink would be my most recommended green screen editing app for iPad & iPhone. It’s a paid app and you have to shell out $2.99. In case you have an iPad Pro, you should try LumaFusion ($19.99). It’s a powerful editing tool and you can have a short glimpse of it in this video.

Coming back to ‘Green Screen by Do Ink’, to apply the green screen replacement, you just have to drop your video in the middle layer. It automatically cuts out the green color and you have a solid black background. You can fix the hardness of the green screen or choose custom colors as well. The sensitivity slider under Chroma menu lets you increase or decrease the hardness.

Green Screen by Do Ink has the most intuitive interface but lacks some advanced video editing features like Transitions, color filters, etc. To solve this problem, you can export the output of Green Screen and then provide it finishing touches in iMovie. iMovie is available for free on the Apple App Store. 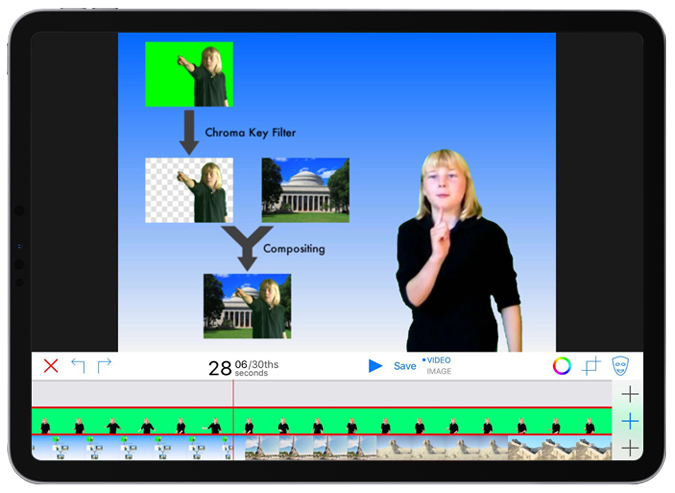 Chromavid is a fantastic green screen utility. It is a must-have if you deal with lots of green screen videos. For a full-fledged green screen video editor, PowerDirector or Kinemaster is the ideal choice. If you just want to remove the green screen, iMovie on iPad or — on Android would be a good pick.

Anyways let me know which app you would prefer in the comments below. For any issues or queries, ping me on Instagram, we can catch up there.

How to Opt-Out of Siri and Delete your...

iPad Pro Tips and Tricks to Make the...

How to Install AltStore on your iPhone to...

A Better Way to Copy, Paste, and Undo...