Android is a double-edged sword, at least for reasons we’re going to talk about today. Whether you’re in a cab late night or there is something humorous going on around, you that you can’t be creepy about but still want to capture. The ability to turn your Android phone into a hidden camera can be helpful provided you do it for all the legitimate reasons.

There are so many options that let you capture pictures or take videos passively without a hint.  Whatever the reasons are ( I hope they’re not fishy) I’ll talk about apps that can do the job with ease.

Not everyone wants to tweak and modify default settings. If you are one of those and you’re looking for a solution that you can instantly use, this might be it.

You can easily get it from the Play Store, Quick Video Recorder app lets you record videos with just a single click. With an option to disable the shutter sound it lets you slyly start recording a video without a hint. It can record even when the screen is turned off. You can easily set a  timer that automatically starts recording a video. In addition to that, there is also a widget that gives you control options right at the home screen. So you can easily press the icon and record.

Note: When you press the record, it shows in the pull-down status bar. 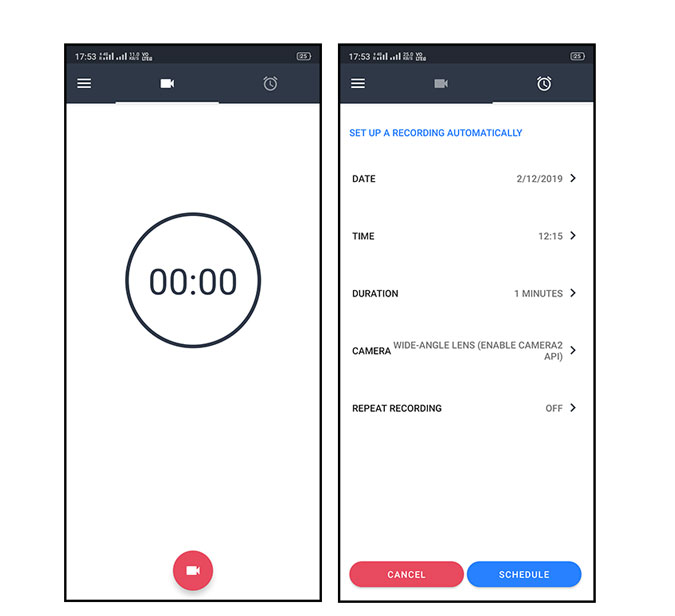 There is also an icon on the menu which lets you record with one click as well. So you’ve plenty of options to choose from in terms of recording.

In terms of app customization, it lets you enable notifications when the recording is complete. You can also enable vibration at the start and end of the video. You can also mute the shutter sound for more discreetness. 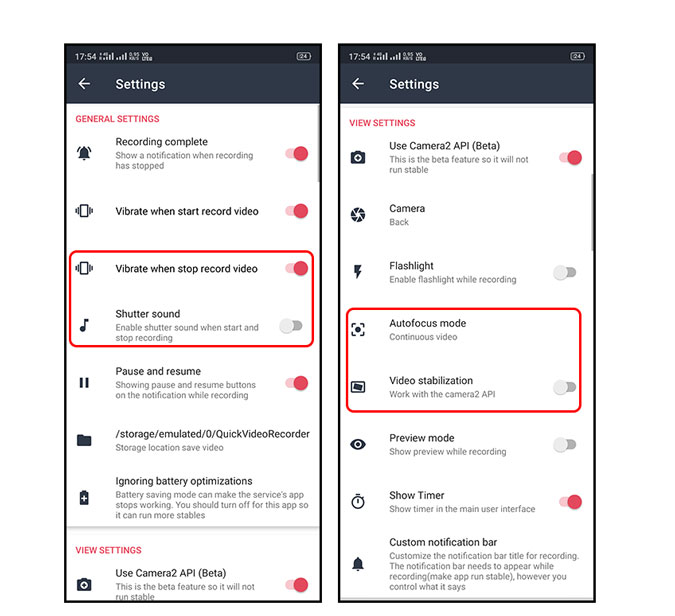 You can also tinker with the Camera2 API setting ( still in beta) and extract more from the app. There is a selection for camera ( Front/Back/Wide Angle), enabling the flashlight while recording, autofocus mode and video stabilization.

In case you want all your Hidden Captures with the same name, you can add a prefix to save the file in the same name format. To further make your recording safe you can add a different extension ( default is mp4) to hide the videos from the gallery and rename them to mp4 to access them again. The app also lets you decide the orientation, i.e, portrait or landscape and the quality depending on your smartphone. 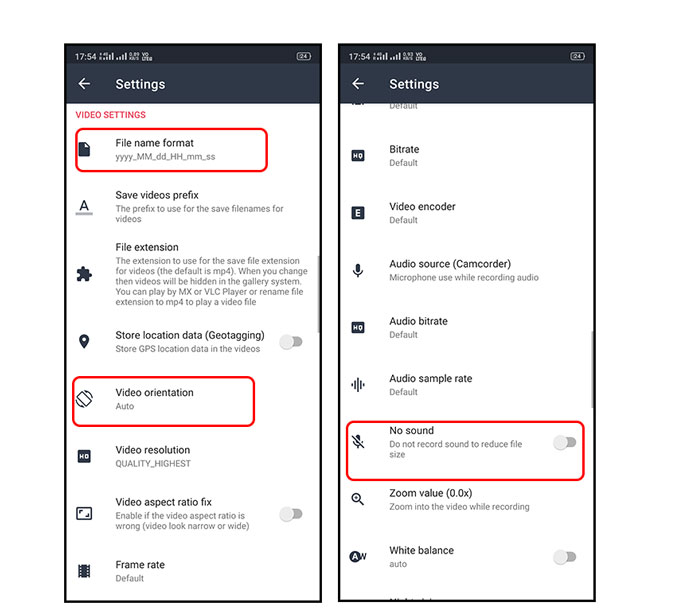 An option to change the framerate, disable audio recording, white balance, exposure and setting zoom values is also available but you’re highly unlikely to use it in an informal hidden recording.

To escape choosing which camera, you can choose a widget by simply choosing an icon ( can be changed) that’ll record, with just a tap on the icon. 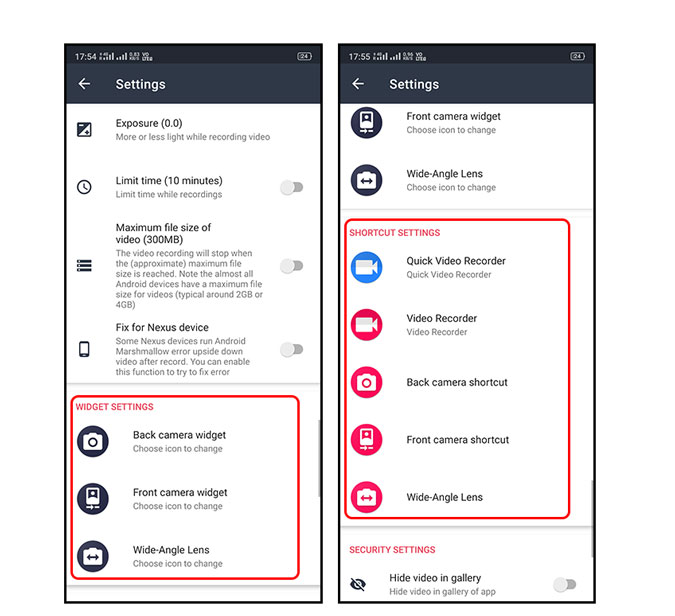 You can select a custom icon accordingly to keep people guessing. There is also a shortcut setting that lets you add icons on the home screen for independent cameras.

You can hide all the videos captured from the gallery ( In-app ) or even from other apps such as Google Photos. 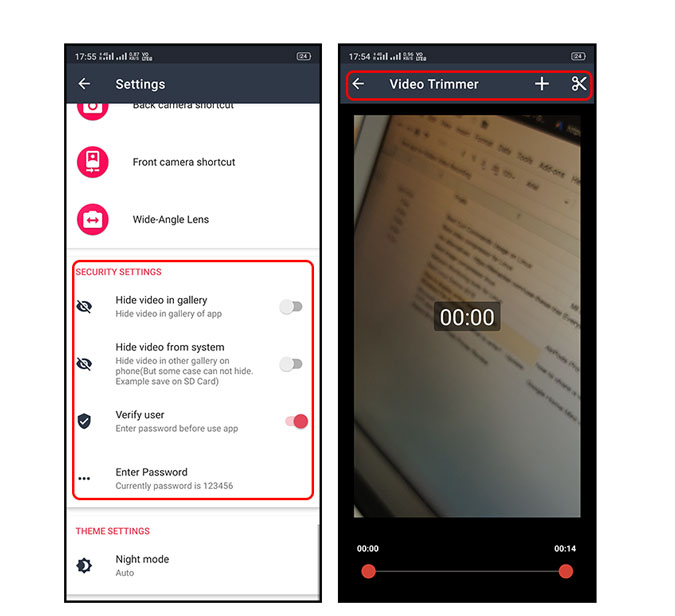 An editor isn’t the primary feature but it does come with one, which is really handy in times of making the footage useful instantly by removing the parts not needed.

Open Source is the way to go for a lot of people and I couldn’t find a better app than Sky Camera OS. It is created by an XDA member Jimmod after his futile attempt in finding the best spy camera app. So how does it fare?

The UI is a bit different from the other apps as it opens up a right on the screen. Translucent overlay of control is a distinct feature when compared to other contemporaries.  It has all the control options neatly lined up with a preview window which lets you see the output from the camera.  There are two vertical bars on the side that lets you manage the size of the preview screen and the other lets you zoom in and zoom out. 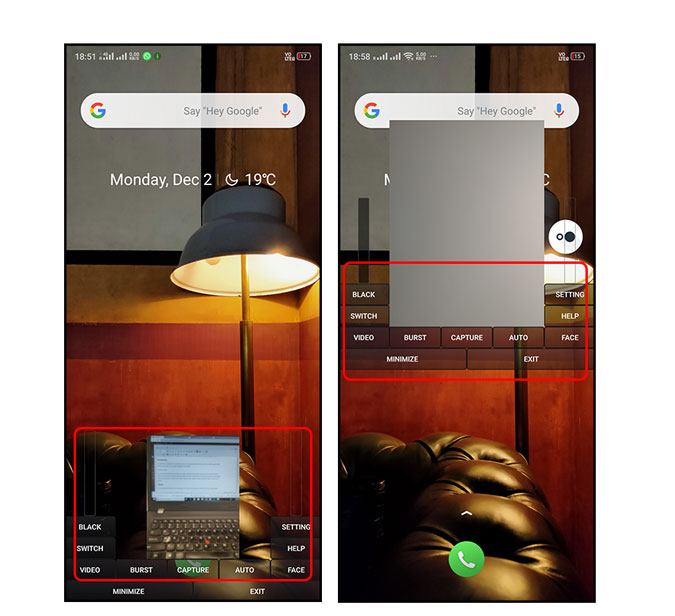 While you might argue that it isn’t as sly for a hidden video cam ( I’d agree) the black screen option lets you turn the screen pitch black and keep the recording on.  In terms of different options to capture there is a video mode, burst mode ( lets you capture multiple pictures), capture ( a picture) and also a face detection mode that captures only when it detects a face. You can also minimize the entire rack or just drag and place it wherever you find it convenient.

It lets you choose between front and back camera but there is no support of a wide-angle in case your phone features the same. 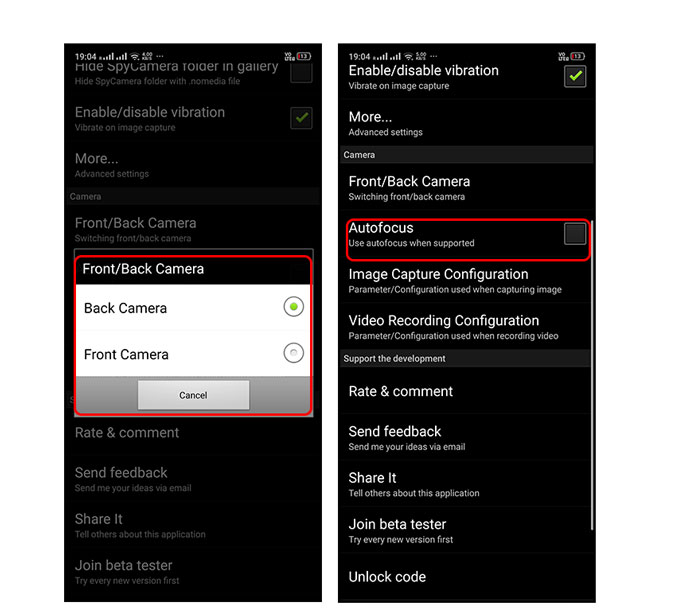 There’s autofocus, which works in most cases but you might find it a bit slow, so I suggest keeping the preview screen on before you hit record.

In terms of the quality, you can choose between the available qualities your phone has to offer in terms of both front and rear cameras. You can also select the delay time between two pictures which ranges from 1 second to 1 hour. 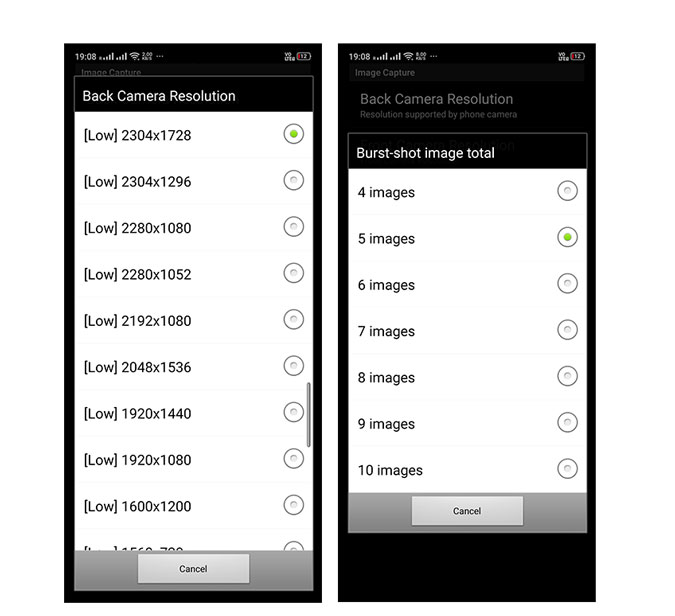 You can manipulate the number of burst shot images with a maximum of 10 pictures in one go.

In terms of video, you can again select between front and back, quality depending on your phone. There is an option to record in 4k but it’s still in beta and the app crashed twice upon using it. 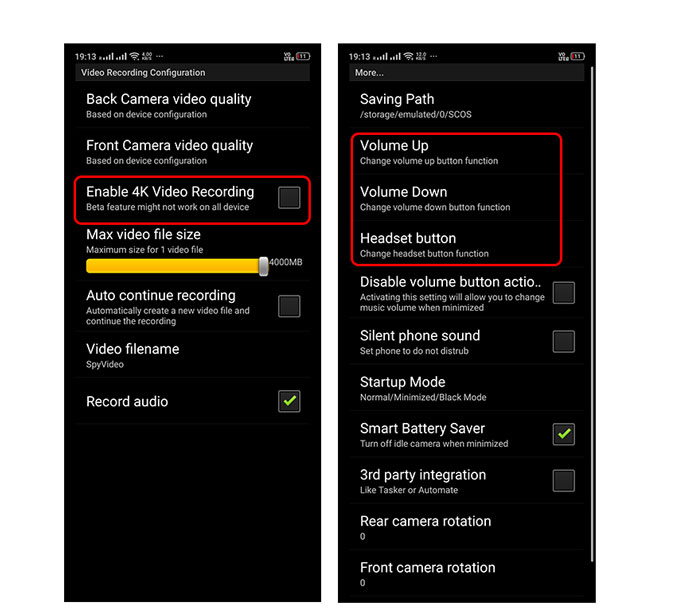 There is a cap of 4GB per video file which has a workaround in the form of a new video recording every time the size breaches the mark. You can also disable the audio recoding to reduce the file size.

Frankly, I used the app when I had to watch my dog from the office. I used Alfred which is a great option, but when I tried to sign in my with my Techwiser ID, it prompted, to only support Gmail. What shall we do now? Alternative? Yes.

You might have an old phone or two which you want to use as a permanent camera for your house. Warden camera simply lets you do that and yes you can sign in regardless of a Gmail ID.

You can simply download it from the play store, register and sign in. Be sure that you punch in the same ID in both the devices so you can access and connect both the phones. 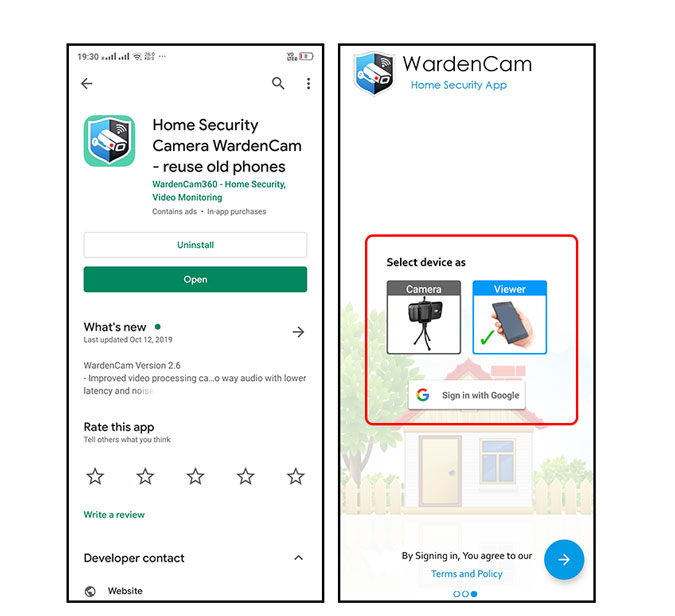 You must remember that you’ll need wifi or an active connection to operate both the phones. You just need to place one phone in the respective location and take the other one with you to monitor.

There are few basic controls on the viewing phone. First of all, there is a preview window that tells you the fps and the resolution the video is being recorded at. There is a record button, night vision which works better in low light situations ( might turn out to be grainy), flashlight option which lets you enable the flashlight of the other phone. 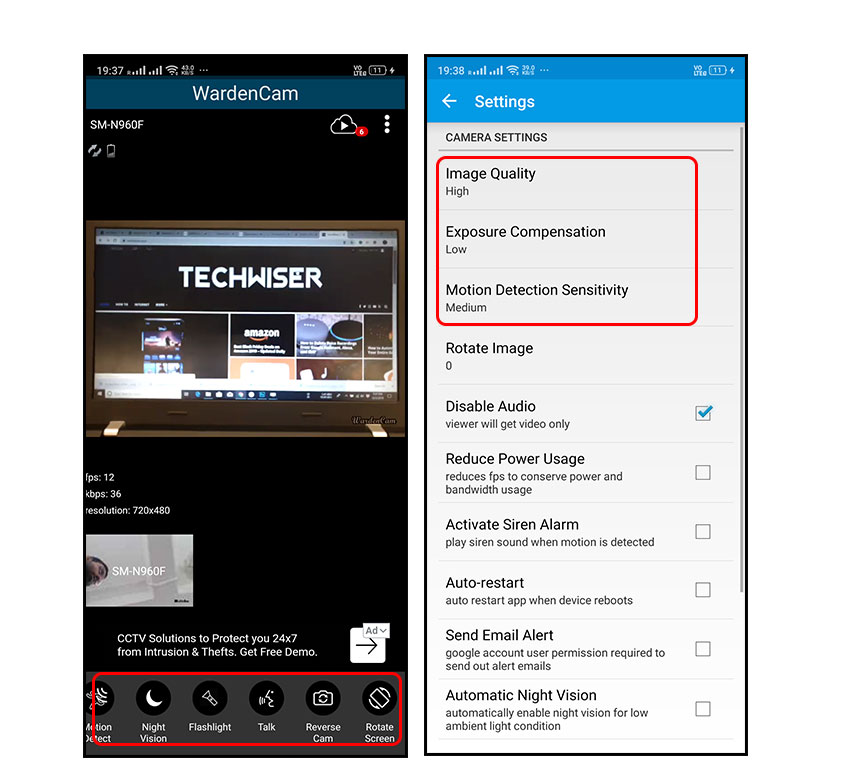 There is also a reverse cam option which enables you to control the other phone and activate either the front cam or the rear, so there is no option to activate wide-angle or other cameras in case your phone features more than that.

This also features a preview screen that shows what you’re capturing.  There are also a few capturing options like the viewer,  but a bit more minimal. You can record, use motion sensing to monitor, activate the flashlight, reverse the camera and set the exposure. There is also a zoom function which is exclusive to this app.

It automatically goes into power-saving mode ( black screen) after 60 seconds. I really like this feature as it not only saves the battery but also lets you discreetly monitor things. 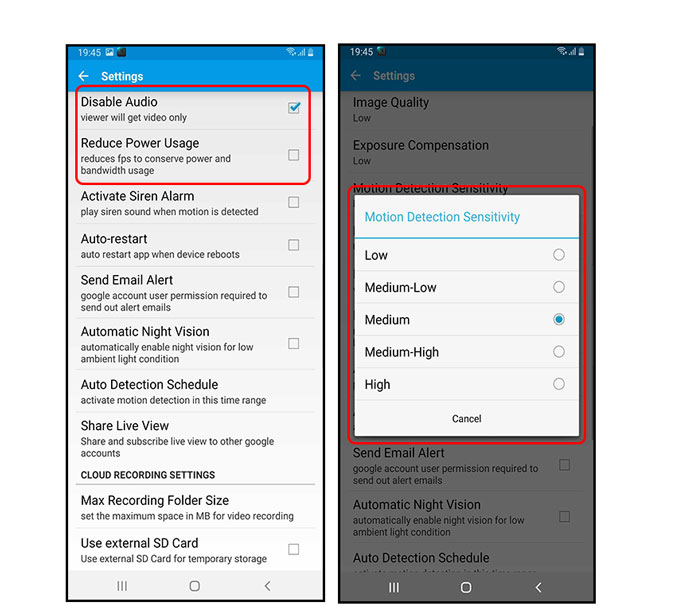 You won’t find a lot of flexible options in terms of settings. You can choose from low and high in terms of image quality and set the exposure, which I don’t recommend tweaking. Five Motion detection sensitivity options are also there which gives a bit more control when motion triggers the record.

You don’t have to worry about losing your data anymore. Nor do you have to fear someone deleting your videos because of the cloud storage feature. It lets you capture video and save it directly to Google Drive or DropBox. You can easily access it either through your drive or simple through the app itself. 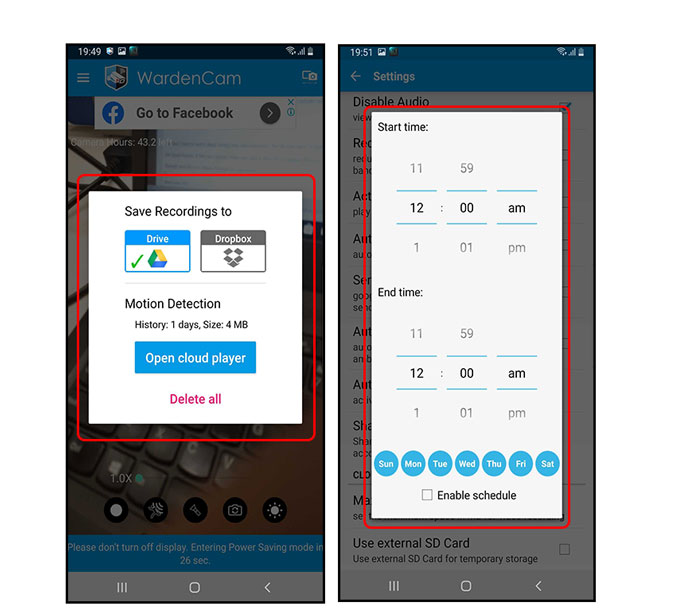 You can schedule the start and end time of the capture with a custom calendar interface. The only drawback is that you actually have to buy to be able to record in HD, access a 2-month cloud storage option and block ads. It comes at a one-time fee of $6, so it isn’t actually costly if you plan to use it extensively.

I have used hidden camera apps in a lot of instances. They are convenient and might put a few old phones to use. The apps I’ve listed here are bang for your time. Quick Video Recorder is a whole package if you don’t want to tweak with the settings a lot. You can simply install it and start using. If you’re too strict about using open-source software with active development and feedback, Spy Camera OS is a no brainer. There is an active XDA forum and the developer is open to suggestions. What these two apps lack is where WardenCam comes into play. With the ability to monitor remotely and cloud storage, it is a powerhouse if you’ve more than two phones to use.

I’m sure there are many more options available. Do you use it and want me to try? Do comment.

How to Watch IMDb TV Outside of the...