Best Logic Games for iOS and Android to Test Your Brain 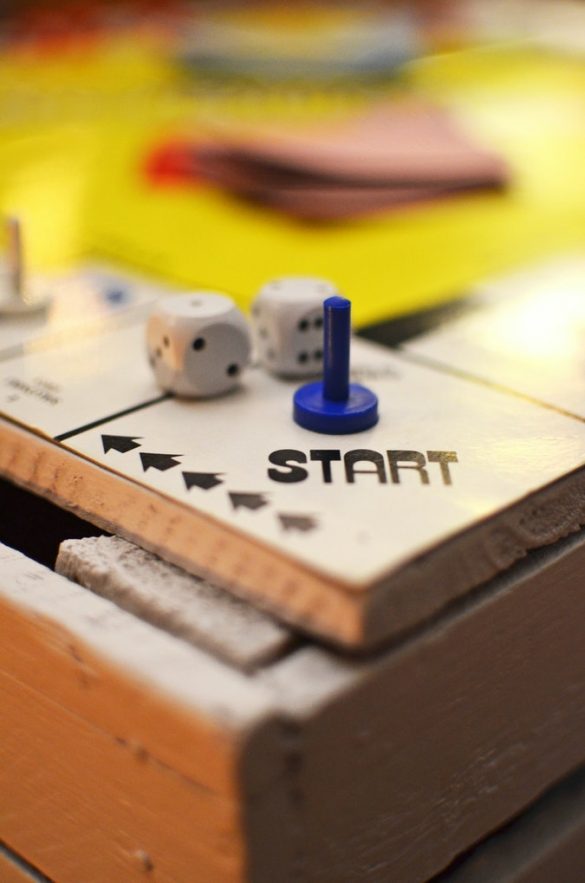 Logic means anything where you’ve to use your mental ability to calculate the situation and find a solution to it. While games like 2048, Sudoku, and other crosswords are go-to games when it comes to logic. But, there are more puzzle games rather than logic games. With that said here are the best logic games on iOS & Android, to brush up your mind.

As the name suggests, Brain Training will put your mental ability to test. It targets skills like logic, memory. There are multiple games within the app such as the Hexa puzzle, block puzzle, Sudoku, Line puzzle, etc. I mostly play Lazer, which involves moving elements to make the laser hit the final block. The app has banner ads at the bottom with no option to remove them. All you can do is simply shut the internet while playing and you’ll have a cleaner playthrough.

It’s a great past-time app where you need a bit of logical skill, and hence great for players of any age. 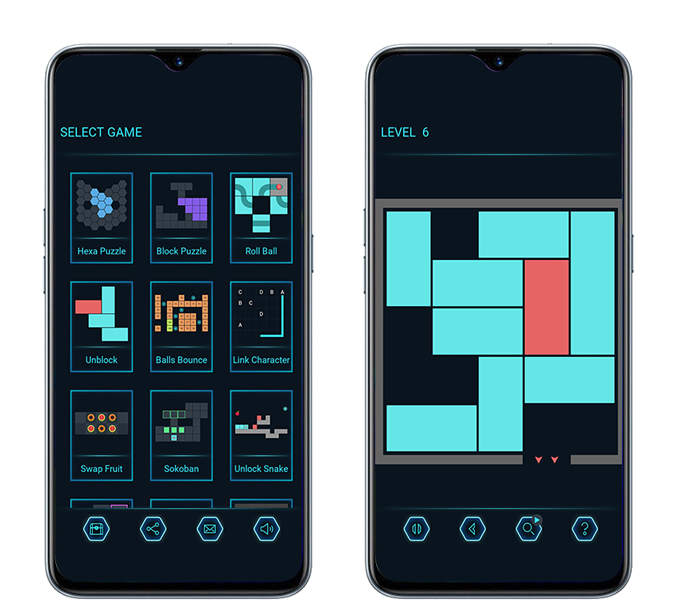 Logic Master is a game that can also be played by kids as the puzzles are rather easy to crack. It has over 200 problems that help in improving memory and concentration. A player needs logical thinking as well as a creative mindset to solve and unlock levels to proceed in the game. You get instructions for every level as all of them are different. The UI is filled with colorful and hand-drawn graphics in addition to music and sound effects which are great for kids.

There is absolutely no ads in the game. So have a blast playing it. 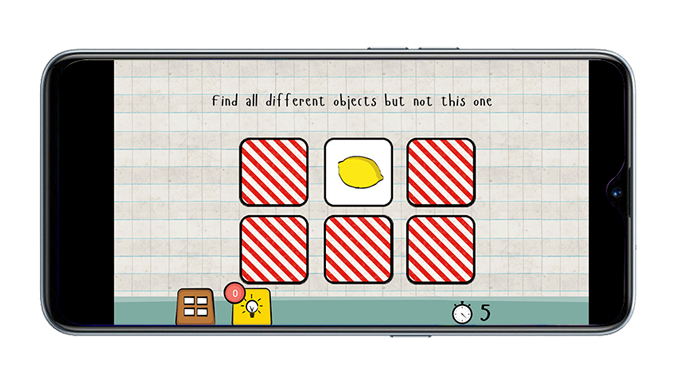 Read: 10 Best AR Games for iPhone and iPad to Play Inside

As easy as this game might seem, it put my mental confidence to test. The game comprises of multiple stages that have different tasks. For instance, drawing a shape to put a ball in a cup or keeping the ball in the air for a few seconds. The game becomes even harder as you just have a limited number of steps to hit the perfect score. There are 240 puzzles in total which unlock as you move ahead. The game comes with ads, however, you can remove it by purchasing the Premium version for $1. This also unlocks all levels and hints. 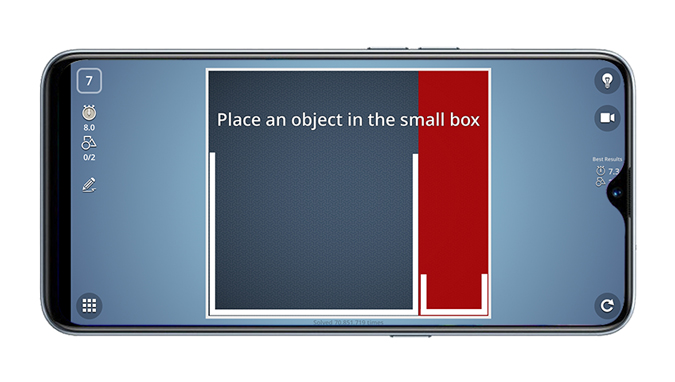 I remember this one back when Flash games were rad. The overall concept doesn’t change, as you have to move characters from one section of the river to the other with some rules and restrictions. The aim is to keep the number of moves as low as possible which opens advanced levels. There are no ads in the game, however, you need to watch a sponsored video to get hints. River Crossing is only available for Android but you can try a similar game for iOS. 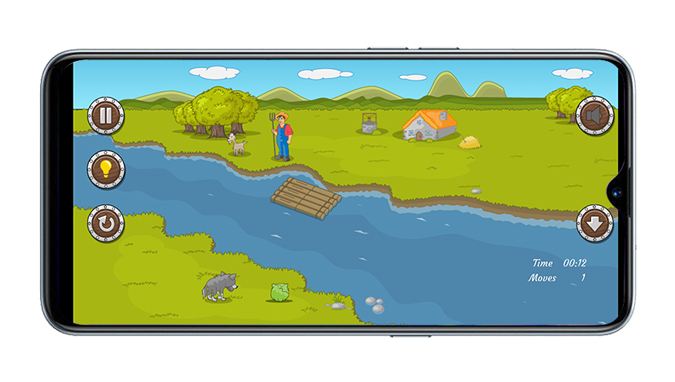 It took me quite some time to solve the first stage, so you can take a guess of how interesting it would be. There 111 puzzles in total, to test your logic, memory, and mental abilities. You must also know if you’re able to solve all of these within 120 minutes, which is almost impossible you’ll be crowned as a genius.  The game is free and you can see clues for each level. However, to see the solution you need coins that can be bought from the store.

For anyone who loves to think out of the box rather than conventional solutions.

Get Tricky Test for ( iOS | Android ) 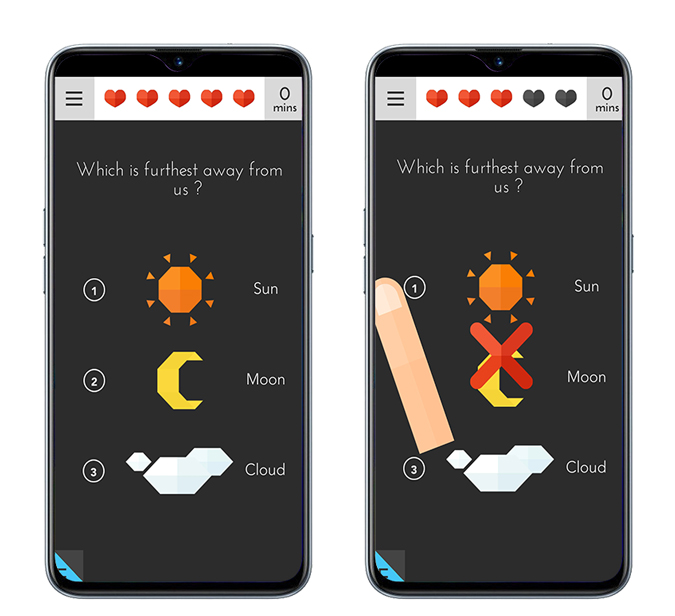 If you’re a fan of Sherlock Holme’s deduction and logical thinking skills, you’ll love this. Tiny Room is a game where you are a private detective and you’re on a mission to help your missing father. It has amazing graphics out of all the apps on this list. You need to find clues and solve them to move ahead in the investigation.  The initial stages of the game are comparatively easy but as you move ahead you’ll see major plot twists. The app is free however you’ll find ads after each successful level. You have the option to remove the ads and gain free hints with a pass that costs $1.

All the levels are in 3D and you can interact by zooming and rotating the gameplay screen. 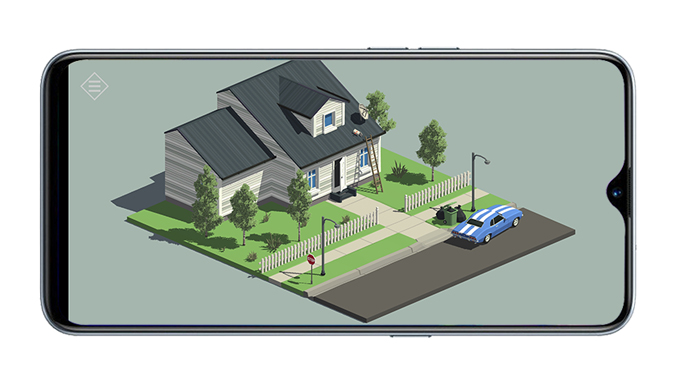 It’s a simple logic game and you might find a bit resemblance with the original Dave. In this game, you have to toggle, jump on platforms, and find your way through a door, by escaping pointed spikes that kill you on contact. However, unlike Dave, all the levels are the same, but the way you solve them is different. Hence, you get 80 unique ways for the same passage making it very unusual gameplay. If you want to remove ads and get free hints, you can buy the game for $1.5.

Get That Level Again ( iOS | Android ) 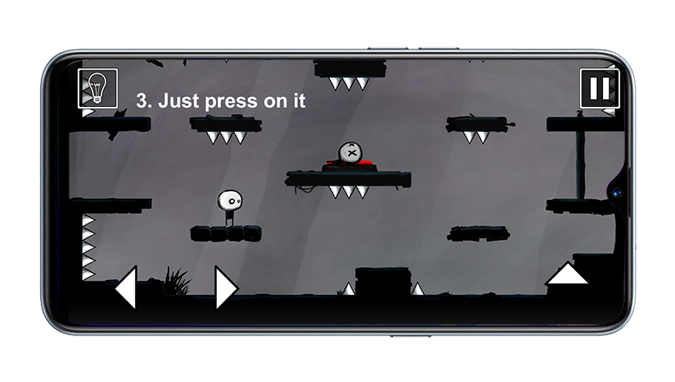 This one is a classic puzzle and logic game if you have an eye for details. There is just one job for a user – To find the key to escape the room. These clues vary from mini-puzzles to finding hidden objects that lead you to clues, which lead you to the next room after you solve them. There are 12 rooms in total in the app. The game has annoying banner ads if you can ignore them, great. However, there is no option to subscribe to remove the ads. 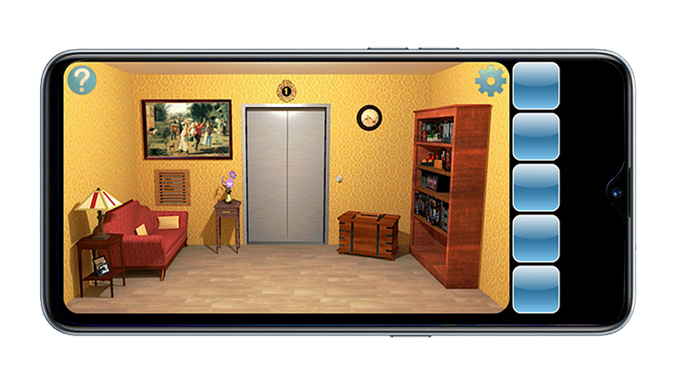 Rebus follows a very minimal and illustrative style in the form of brain teasers. The concept of the game is simple, you have to connect an illustration with one or more alphabets and form a word. Besides normal guesswork, you also have to think about every possible outcome that it can have and probably keep guessing until you get the right answer. You receive coins for every right answer which you can use to see hints. there’s also an option to buy these coins from the setting tab. 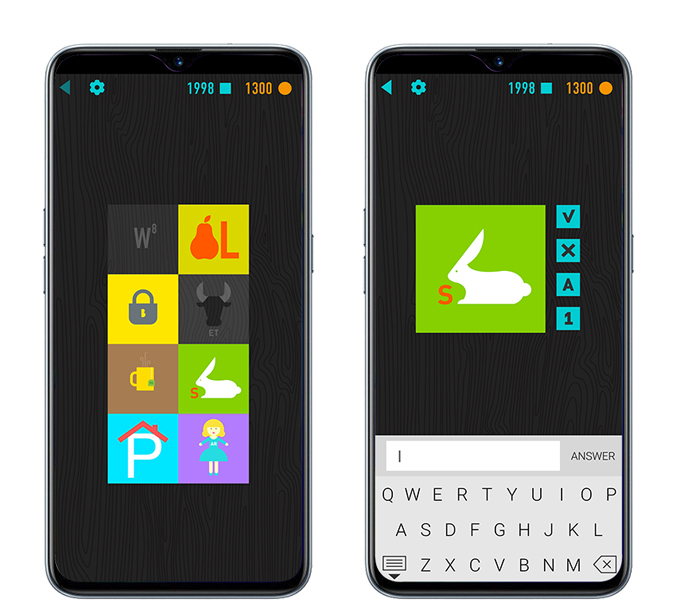 Ordinary is a blend of Sudoku and Picross. The game just has two rules, cover each number with the same line length and covering all dots with a line. I’m sure that sounds confusing, therefore you can refer to the tutorial section in the game for more clarity. This is a free and open-source puzzle game. Hence there are no annoying ads or in-app purchases.

As the game has only one solution, no trial & error but pure logic would only work.

Get Ordinary for ( iOS | Android ) 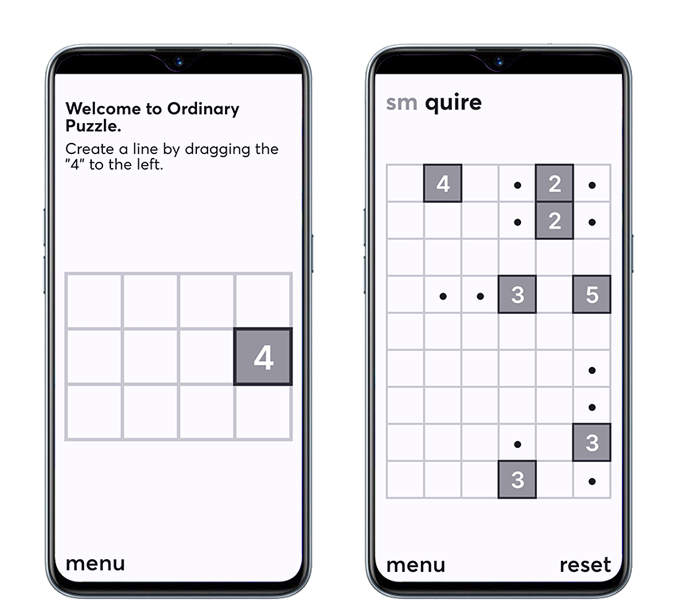 You might fight it amusing but this one has made game’s instructions a part of the challenge. You work through puzzles with an AI guiding you with fun responses through the tasks. This chatty AI throws easy puzzles at first but slowly you get a grip of harder tasks as you move ahead in the game. Some of these puzzle use, phone’s hardware or involve flipping the screen in weird ways. The game has 40 levels and you can jump to any level after you complete the game. You can buy the app for $4.

Monochromatic UI where you solve puzzles with an AI.

Get Hello Human for ( iOS | Android ) 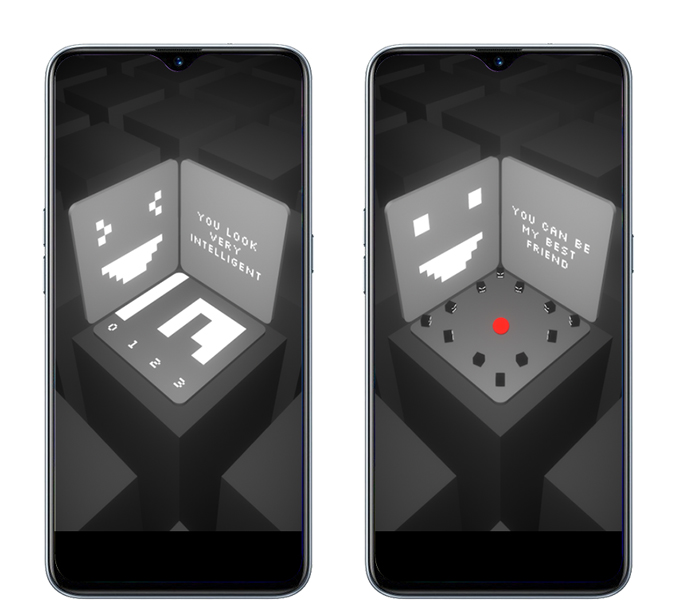 12. Through the Darkest of Times

It’s a strategy game where you are a part of a resistance group who’re trying to save as many lives from Nazi atrocities.  The is divided into 4 chapters. As a leader, you’ve to make strategies to gather information, recruit followers, and make people aware of Nazi intentions. The real struggle is to do all of this while staying undercover and not getting caught by patrolling soldiers at any cost.  The app is more than 700MB and costs $6.99.

Narrative style gameplay where you have to strategize without getting caught.

Get Through the Darkest of Times for ( iOS | Android ) 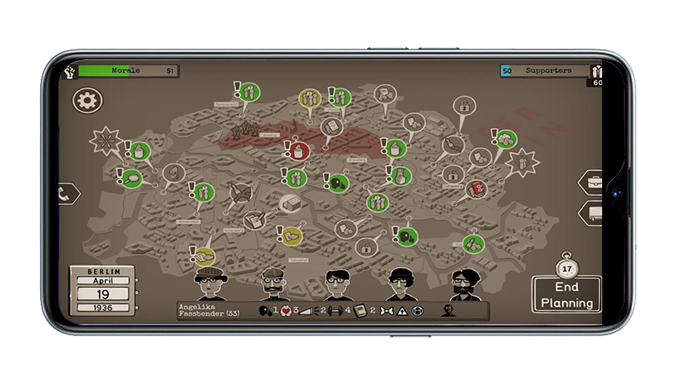 Now, don’t sit back and relax and put your mind to work. If you get bored of these anytime, you can get back to some mind-relaxing games, so you can redo a failed attempt with more focus. I hope you solve these logic games, enjoy!