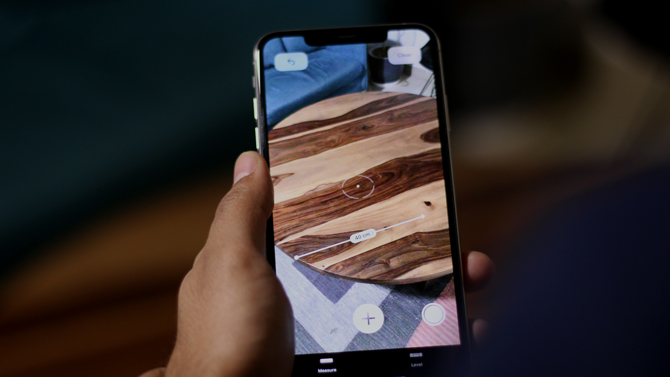 Trying to find the tape measure when you actually need it is the most difficult part and, to be honest, you don’t even have to own one unless you have a job that asks for it. So what should a common man do when they have to measure up some furniture? Well, you can always use your smartphone and install these best Measurement apps for Android and iOS. Let’s Begin.

Kicking off the list with Google’s own AR app, Measure. The app lets you measure real-world objects using just your smartphone. Although, you’ll need an ARCore-capable phone to make it work.

Measuring the length with this app is very easy. You simply open the app, calibrate it and start measuring. The app automatically detects a surface and guides you on how to take a reading, which you can switch between imperial and metric units. You can use it to measure the dimensions of everyday objects like Tables, floors, doors, carpet, etc. Along with measuring the length, it can also measure the height of an object lying on a flat surface. The only requirement for this app to work properly is a flat surface.

You should expect a little bit of error while estimating the length of an object but it is generally negligible which should be the case for general purpose measuring. The app is free on the Play Store.

The second app is an iOS exclusive and conveniently enough also called Measure. It works on the same principle as the previous app and lets you calculate the length using the iPhone Camera. 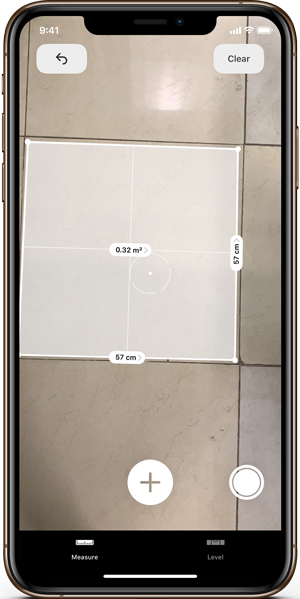 Using this app is very intuitive and I would say it is even better than the previous app. You can measure the length of an object by simply dropping a pin on either end and sometimes the app automatically pins itself and give you the length automatically. You can even measure the surface area of an object by measuring all the sides which is great for figuring out the carpet area of the floor. The app also has an inbuilt spirit level which lets you check if the objects in your house are perfectly level.

Measure for iOS is free on the App Store.

We’ve scanned all the objects in the room but what if you need to measure the room itself? RoomScan is a well-made app to create floorplans. You can use this app to scan and measure every room in your house in great detail.

The app uses three techniques to measure out the dimensions of your room. The first technique, Scan by Touching Walls is so simple and efficient that you don’t even have to calibrate the app every time. Just place the phone against the wall, hold it until the app tells you to move to the next wall, and repeat until you reach the starting point.

The second method uses AR to generate a 3D model of your room, you can scan the room, adjust the height, and even add doors and windows to the model. All the projects are saved on the app which you can export as an image, PDF, or DXF. The app is powerful enough to create a detailed floorplan of your house without much effort. You can use this app to create as many scans but sharing the scans is locked behind a subscription of $8.49/yr but you also get a free trial for 7 days. Android users can try ARPlan 3D to create floorplans using an Android smartphone.

After scanning your room, let’s get bigger and check out this app. This app lets you measure entire plots of land from the comfort of your home. You can measure the size of your ancestral land just by using the map.

Read: 7 Ways to send GPS Coordinates to Someone

Using this app is simple, open the app, find the area on the map, drop pins on all the edges, and done. The app instantaneously calculates the area and displays it on the top. You can adjust the edges calculate the area even if the plot of land is not perfectly rectangular. After measuring the piece of land you can save the picture on the Camera Roll and give it a title. You can also use it to calculate the distance between two points using the GPS mode which can also come in handy while measuring the area while walking along the edges of the property. The app is free and has ads.

Google Maps is not traditionally a measurement app, but one of the features that makes it great is the distance measurement feature.

You can measure the distance and perimeter of an area simply by traversing the route in the map. Drop a pin on the starting point from where you want to start the calculation. Swipe up to reveal a list of options and select measure distance. Now, swipe across the map to move the pin around, it will tell you the distance traveled. To make a turn, tap the + button and now you can make a turn. This method only lets you calculate the perimeter of an area or you can use it to calculate the distance between two points.

We’ve checked out apps to measure lengths of objects and scan entire rooms but how do you draw a straight line without a ruler? Use your smartphone. 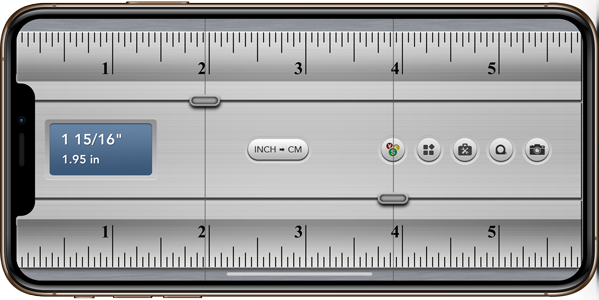 Ruler app displays a ruler on the screen and two guide-lines which would help you draw precise lines. Depending on which phone you use, the app automatically adjusts the ruler and shows you precise markings. The app shows the divisions in cm which you can change to inches by upgrading to Pro version for $0.99 and you would get a tape measure, as well as, an AR-powered measurement tool. You can also check out their other app, Protractor to use your smartphone as a Protractor. Ruler is free on the App Store and has ads.

Okay, so we’ve used a digital version of the scale and now we’ll measure Angles using the smartphone. 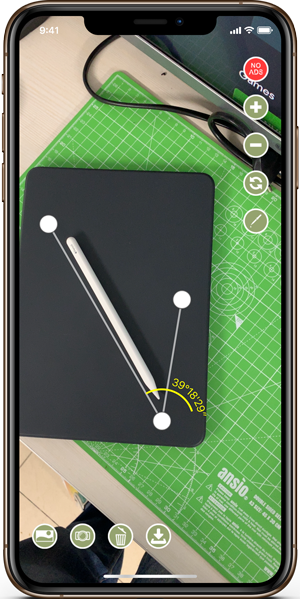 The app is free on the App Store. Check out the Android equivalent of this app, Protractor (free).

Smart Measure is the app that calculates the distance between the phone and objects in front using the build-in camera, similar to how lidar works. The data isn’t accurate but it is reliable and closest most of the time. But the true functionality of the app is calculating the size of the large objects.

These were my picks for the best measurement apps for Android and iOS. Every app is unique and brings something different to the table. Measure by Google and Measure by Apple are both excellent apps to measure the length of everyday objects. RoomScan is best if you want to create floor plans. Ruler converts your phone into an actual ruler. Sound Meter is an excellent app to measure sound around you and color Grab tells you what color are you looking at? Which apps do you use to measure things using your smartphone? Tell us in the comments below.