Morse Code has been around for more than 150 years now and still amazes most of us. Every day someone discovers this protocol and goes online to learn about it. Interstellar Anyone? Well, there are plenty of apps available and most of them would get the job done but might leave you confused. We have compiled a list of best morse code apps for Android that you must check out if you wish to learn Morse code and use it with your friends.

Morsee is a very simple app which lets you practice morse code. You can use this app to learn the morse code of the English alphabet, Kana( Japanese ) and the Cyrillic alphabet(Russian Alphabet). 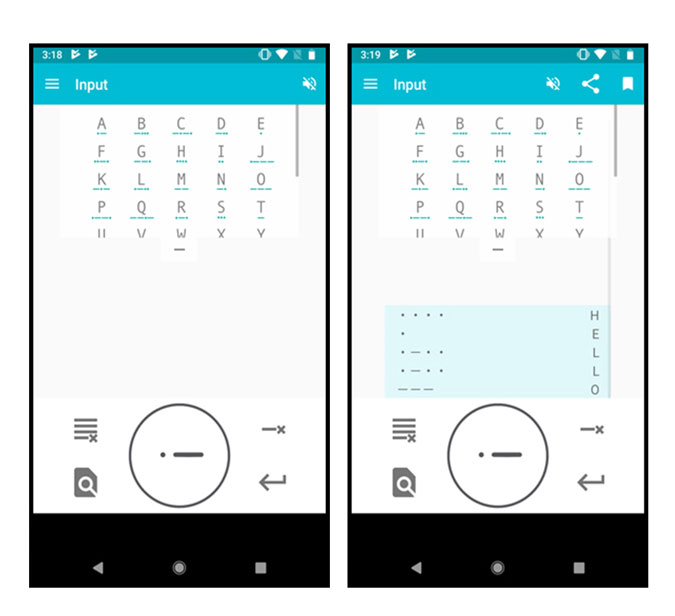 You can begin practicing by pressing the big button in the middle. A short press registers a dit and long press, a dah. Morse code is just the combination of dits(.) and dahs(-). If you wish to send an encrypted message you have to tap the whole message and convert it to morse, you can then share it with your friends by tapping on the preview icon. It is a fun little morse code practice app for people who wish to learn this ancient yet beautiful coded language.

Morse Trainer is, in fact, a trainer app that trains you to tap morse code efficiently. It has no other purpose and features, just practice exercises, feels like a strict commander right? 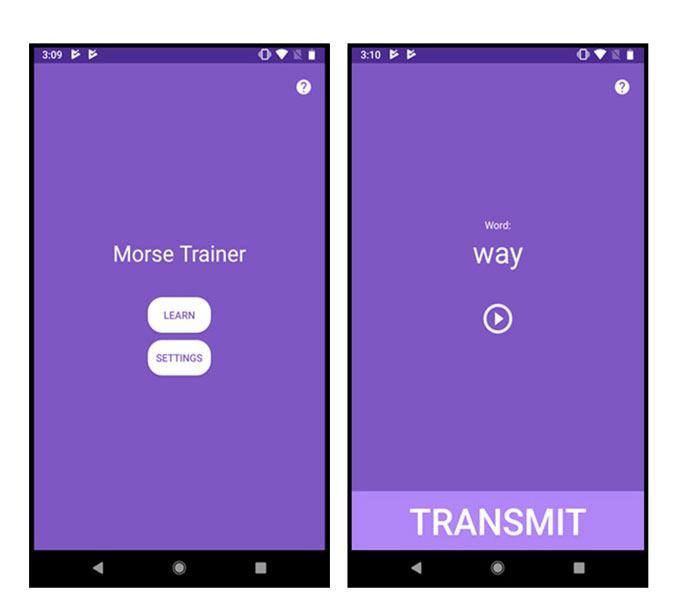 It has two options through which you can practice your skills, first you begin by learning the letters of the alphabet. Every letter is accompanied by its morse code and you can practice by tapping the transmit button on the bottom. Every successful attempt at getting the morse code right brings you one step closer to being a master.

This app does a decent job in teaching Morse code with baby steps and working your way up. You can find this app for free on Play Store and use it to add a new skill to your resume.

We all love quiz apps and they are a fun way to learn new things, the reward of getting an answer right really registers things in our brain and helps us in remembering things easier. This app does just that and uses the simple quiz-style layout to teach you about the morse code. 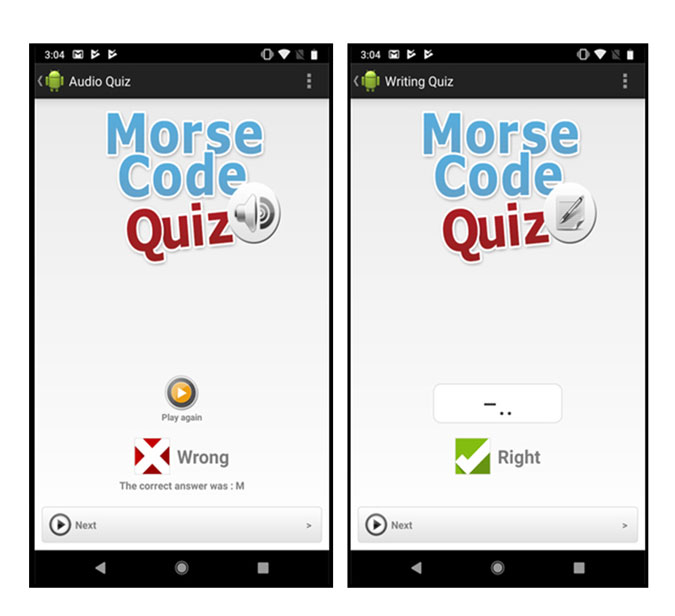 It has two quizzes, one where you recognize the dits and dahs to guess the letter or the one where it plays the morse code audio and you guess the code. It is actually fun when you start getting the answers right, which doesn’t take long.

Using this app is a fun way to learn Morse code or maybe teach your kids a new skill instead of a mind-numbing arcade game. Overall, if you are looking for a morse code practice game, this app is for you.

As his developer has stated, M3 stands for Miraculous Mighty Morse, sounds quirky enough, well the app certainly is. This app is a translator app which translates Morse to a couple of different languages like English, Japanese, Russian, Greek, and Hebrew. It also works if you wish to convert your text to Morse code. 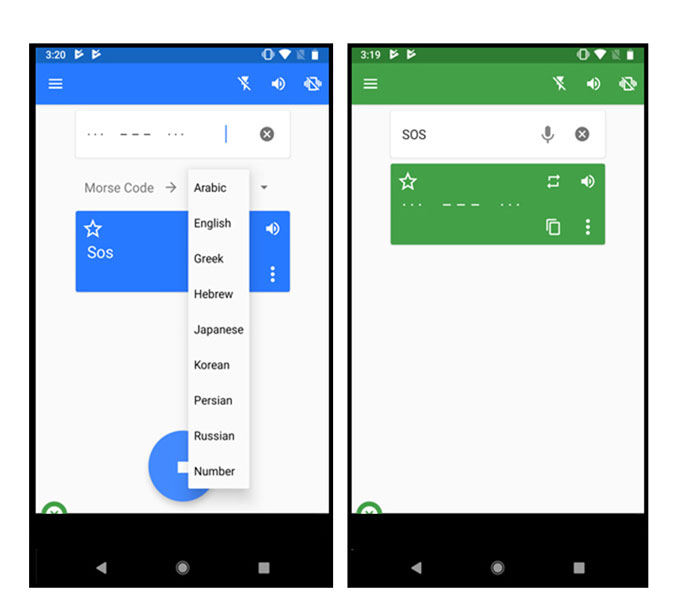 It also supports voice input and can convert your speech into Morse code. You can transmit the morse code through three different channels sound, flash, and vibration simply by checking the three boxes on the top right corner, which is impressive considering the minimal layout of this app. If you ever come across some secret documents and all the information is in morse, just whip up this app and translate the document with this app. Maybe you’ll uncover some big conspiracy.

Morse Code Reader takes the most obvious input, sound and tries to convert it to text using Morse Code. In short, if you are looking for a morse code translator audio, this app is for you. 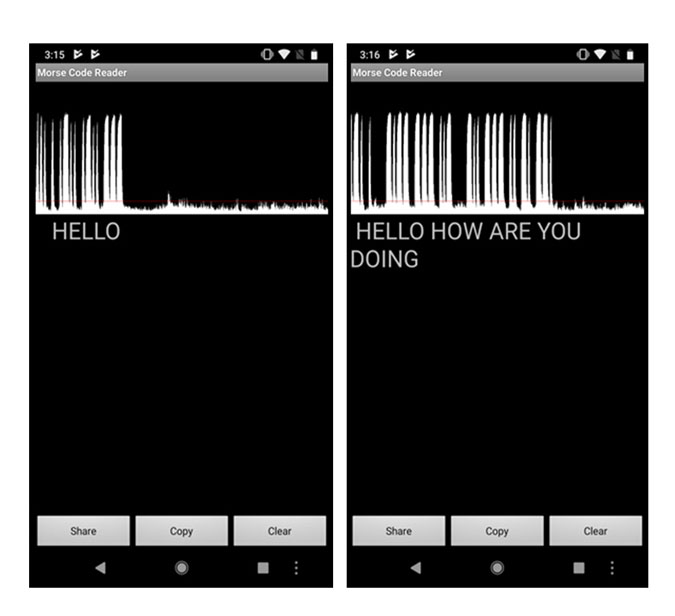 It has just three buttons clear, copy, and share on the bottom. It constantly picks up on the sound through the mic of the phone and guesses the pattern of the sound. Now if you were to place your phone near a source of Morse Code using tones, this app would pick up the sound and convert those short tone sequences to text. This app just does that, you can’t do anything else with it, but it’s fun to play with.

It has some limitations too, like noise, if there’s too much ambient sound it tries to decode that as well and your original coded message is ignored. So it’s best to use this app in a quiet room with minimal noise.

People have been using coded messages since the dawn of civilization communicate. Native Americans used to send smoke signals that only the people of their tribe understood. Morse has so many ways to transmit and one of the most intuitive ones is using light. The flashlight can be used to generate signals in morse to have secret conversations with your neighbor or if you’re ever trapped in a place where there is poor reception. 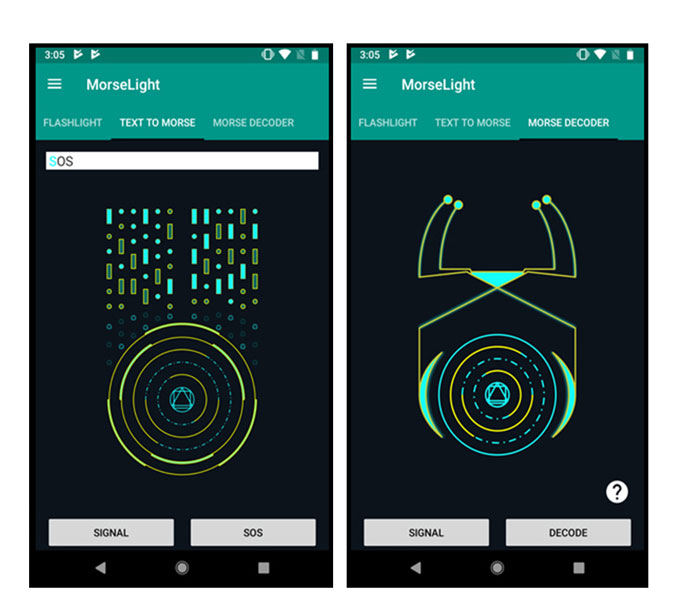 MorseLight uses your mobile phone’s flash and converts the text to morse code. It can be decoded by anyone in the line of sight. You just enter your message in the text box and press the signal button. The signal flashes in short bursts of light and sends your message to your savior.

This app only sends visual morse code using flash but can not decode an incoming flash signal using the camera, instead you have to manually input the signal in the app which converts it back to English.

We’ve checked out all kinds of different apps ranging from translating Morse Code to generating Code from the Flashlight. Morse Code Keyboard as the name suggests, let’s you type in Morse Code. It appears as a regular keyboard but when you tap a key on the keyboard, it types out the corresponding Morse Code instead of the letter. 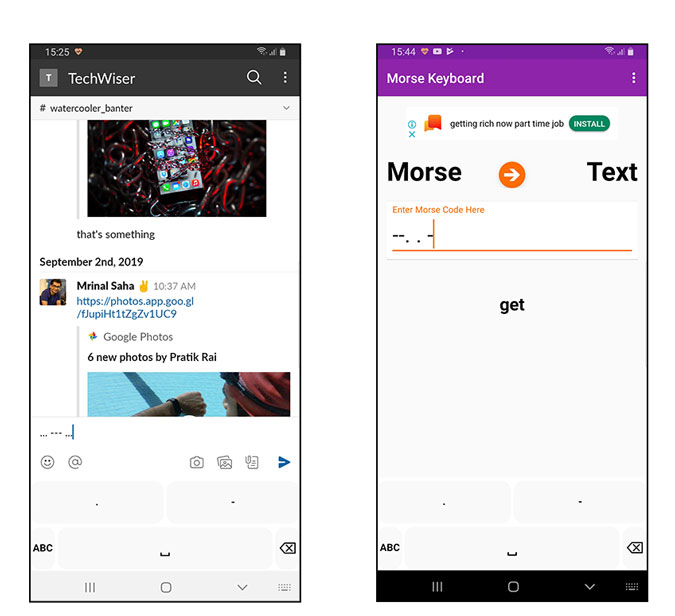 You can use it to send secret messages to your friends and have a little fun. The text sent as Morse can be easily interpreted using the keyboard by copying the text and tapping the decode button.  The app is free on the Play Store and has ads.

Morse code is an ancient protocol is still used today, even though it is slower than most of the channels. It can be transmitted through flashlight, sounds or can be communicated by blinking during a hostage interview. The possibilities are endless. The apps we listed in this article cover most of the requirements of a person. If you just wish to learn morse code Morsee is the right choice. You can play and have fun while learning morse code, morse code quiz is the choice. If you want to send and receive morse code and talk in secret. M3 translator is great.

How to Fix In-App Purchases Not Working on...