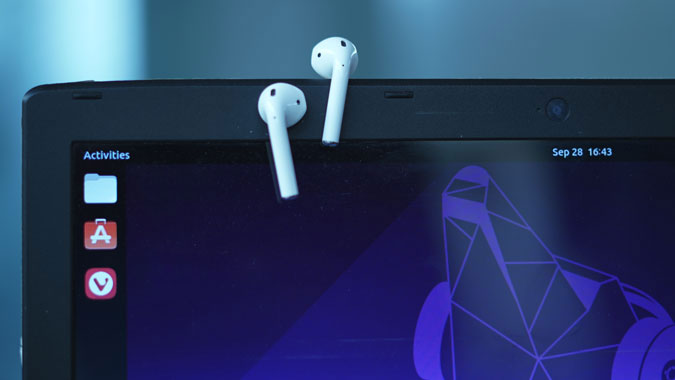 I like to download my playlist majorly because most of the streaming services don’t offer lossless audio quality. I have a huge chunk of FLAC and WAV audio files that I carry along to different systems. Lately, when I made the move to Ubuntu, it was hard to find a good music player unlike Windows 10. The most popular ones like Clementine, Audacious, etc. weren’t aesthetically appealing and too cluttered with features. I wanted a music player that could play lossless audio formats and be visually soothing. So, here’s my list of the best free music player apps for Ubuntu in 2020.

Before, you head on to download a third-party music player, you can check out Rhythmbox that comes pre-installed in Ubuntu. It not only supports a wide number of audio formats like WAV, FLAC, MP3, Ogg, etc. but can even pull and search songs from SoundCloud. Useful if you are someone who likes to listen to indie artists.

My favorite feature of Rhythmbox is support for RSS feeds in podcasts. For instance, I listen to The Vergecast and it’s easy to feed in the RSS and listen or download from within Rhythmbox. Apart from this, you get the usual features like FM Radio from Last.FM, and Libre.FM. You will find this in most music players on this list.

With all that said, Rhythmbox does have its fair share of problems. For instance, the biggest drawback is the lack of YouTube support. YouTube is where most of the music lies. Additionally, it doesn’t have an equalizer built-in (you can get it with plugins).

Lollypop is the most visually soothing music player for Ubuntu on the list. It really goes with the GNOME desktop theme. Unlike Rhythmbox, it does have a functional equalizer built-in that has enough amount of presets. If you want a more customized experience, it has a 10-band equalizer too.

Additionally, Lollypop can fetch songs from Spotify and YouTube. It also scrobbles around Brainwavz after you sign-in. In case you don’t know, scrobbling basically picks up the track you were listening to in Brainwavz and puts it in your tracks in Lollypop. But, if you find it creepy, this feature is turned off by default and you don’t need to enable it. My most favorite option was the ability to shuffle and play most listened tracks from the local files. It felt like Spotify but for local files.

In case the web search doesn’t work, you would have to obtain a personal API key for YouTube API V3 and Custom API Search.

If you just want a music player to listen to local songs, Lollypop’s the best option out there. Apart from that, it does miss out on the RSS Feeds and you would need to manually download podcasts with Rhythmbox to listen within Lollypop.

Nuclear is another open-source modern music player for Ubuntu. Similar to Rhythmbox and Lollypop, it can stream music from free sources like YouTube and SoundCloud. Additionally, it supports Bandcamp as well which is nice because I follow a bunch of artists on Bandcamp and I can stream right within Nuclear. The best thing about Nuclear is the equalizer which is quite intuitive. It doesn’t have a lot of built-in presets like Lollypop but it’s sure intuitive to customize.

Apart from this, it also supports Last.fm scrobbling and can pull your tracks from GitHub or an HTTP server.  Nuclear is a good music player to stream from multiple music services but the UI options feel a bit confusing. The top bar contains a back and forward button but there are even menu controls that more or less do the same thing.

Well, Spotify is better known for its music streaming but the app also supports local songs. You just have to add the directory in Spotify settings under Local Files. For a detailed picture, we have a dedicated article on importing and syncing local files in Spotify. The only caveat with local files is that it supports a limited set of codecs like MP3, MP4, M4P, etc. But, Spotify provides a huge online streaming portfolio with podcasts. Recently, Spotify grabbed a lot of exclusive podcast deals. So, inevitably, if you listen to these podcasts, you would have to move to Spotify.

Spotify does have a beautiful UI but it suffers the same problem as Netflix. Spotify wants you to listen to the songs it recommends rather than you searching for them. Plus, Spotify podcasts have ads (even if you are a premium user).

Out of all the popular command-line players, CMUS is my favorite. It works on the old-school VI editor shortcuts. For instance, to add a music source, you have to type “:add ~/Music”. To exit the player, you have to type “:q” and hit Enter. Additionally, you can pause/play, skip, and seek music using hotkeys. If you use a DAC, CMUS also supports both sound servers ALSA and PulseAudio.

Nuvola supports a wide range of streaming services (30 to be precise). In case you have a YouTube Music account or Plex Media server hosted, Nuvola is the best option to have on your Ubuntu machine. The only caveat is you would have to install separate plugins for every streaming service. For instance, if you want YouTube music, you will have to install the YouTube music plugin for Nuvola and for Plex Music, a separate Plex Music plugin. All these apps stand separately on the launcher. It would have been great if everything was bundled in a single app.

VLC Media player is the swiss knife of media. For everything related to video, movies, and songs, you need to have VLC on your device. If any music player or video player cannot play a particular file, you will have VLC at your disposal. It supports a wide range of codecs and has the capability to play any media file.

To open a music directory, open VLC media player and hit Ctrl+F. Select the music directory and hit Enter. Next, VLC will play all the audio files within the directory in a linear order.

If you want both podcasts and a local music player, Rhythmbox is a good option. For minimal use, I would recommend the Tauon Music box or Lollypop.

Also Read: Best Music Players for Android You Should Try in 2020