Considering that half the world is in quarantine, now is as good a time as any to catch up on some games that you might have missed. If you have an Apple TV at home and looking to play some while we bide our time. Here are a few paid Apple TV games that I personally handpicked for you, legends. Let’s begin.

I also recently covered some of the best Apple TV games that are absolutely free, you can check it out here.

Dead Cells is a blend of the popular rogue-like and Metroidvania genres. You play as a failed alchemist whose objective is to uncover the secrets of the dungeon. This 2D platformer will require your undivided attention and possibly a controller. There is so much detail to the game which you will discover every time you die in the game and you will die a lot if you don’t quickly learn your enemies’ moves.

Read: How to Watch Apple TV+ on Roku, Firefox, Android TV and Chromecast 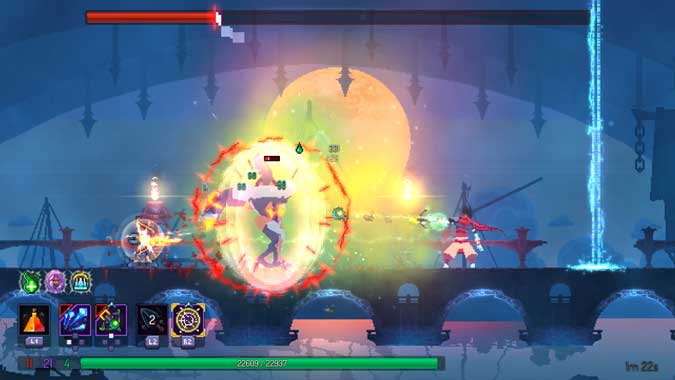 Snakebird Primer is a Sequel to the casual puzzler by the same name. Even though this game is easier but the puzzles are still fantastic. Your aim is to become the largest bird possible by consuming as much fruit as you can. However, the fruits are hidden behind the puzzle. You’d have to discard all the knowledge of physics to beat the game. 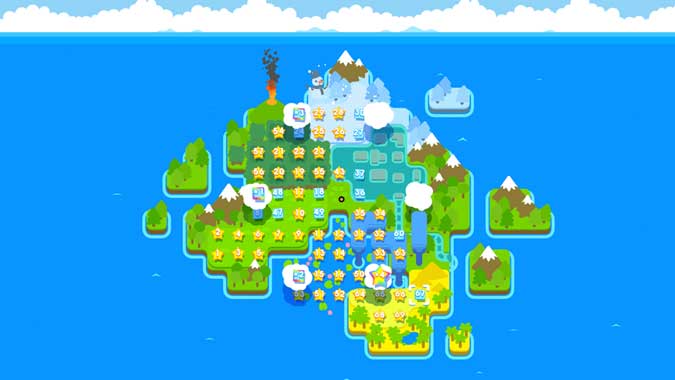 This is a Unique 2D Metroidvania, which makes you leap and jump to walls and floors instead of your traditional Mario like jumps. The skill cap is quite demanding but fair considering it on apple TV with remote. It recently got an expansion which adds more bosses and levels. This can keep you occupied anywhere between 7-8 hours, that’s like half of your day and full day for me. 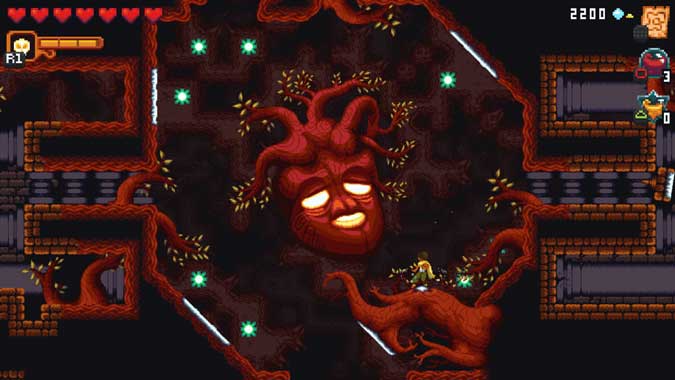 Hyper Light Drifter takes you back to the 16-bit nostalgia with its retro design. You play on a vertical map and you climb up to level UP. The controls are tight and you’d have to be precise or come straight down to the depths of the unknown. This one totally feels like a mix between links to the past and diablo. Hyper Light drifter engrosses you with great combat and hypnotic visuals and sounds .its substance over style, unlike most pixel art games that are dumped on steam. 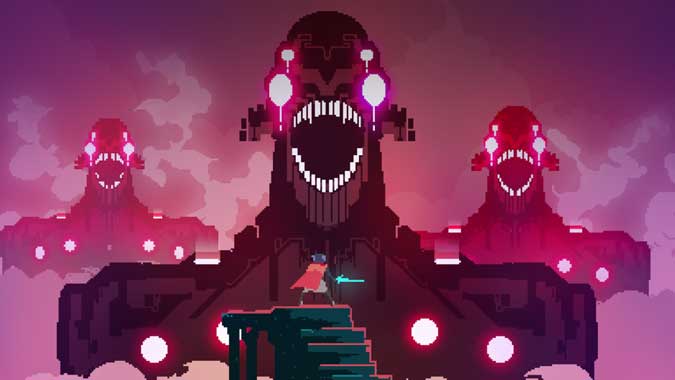 Hitman GO does turn-based puzzle gaming right and one of the reasons it revived the genre. You play as the iconic Agent 47 who still has bounties to make and people to kill. However, you do this by solving puzzles. The levels get more complex as you progress and new mechanics are introduced that sometimes are mixed with other elements. 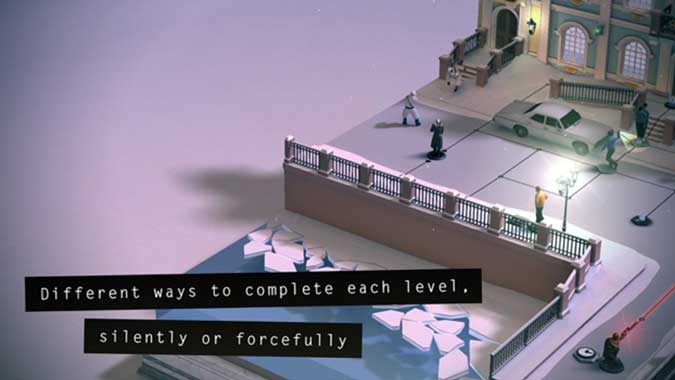 Just like Lara croft and Hitman, Deus Ex GO distills the core elements to fit a turn-based puzzle game. Straight forward puzzles look simple but sometimes have hidden layers that would make you think sideways. The best part about this game is that you can create your own puzzles and then challenge your friends to solve it. 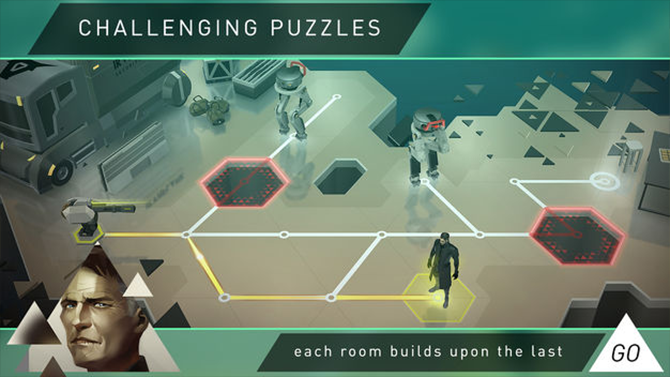 An iconic JRPG game that stood the test of time and influence other final fantasy games. While the time travel element lets you access 7 different versions of the same map, you will get the option to plan your moves during a fight. You will get the ability to use all the magical powers and combos of the characters that make the gameplay even more exciting. With characters from Dragon Ball, Final Fantasy, and Dream Quest, this truly is the ultimate RPG. 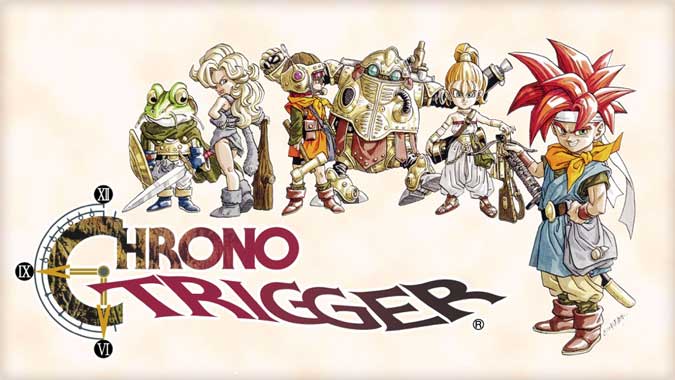 Next, we have one of the most popular games for iOS. Alto’s Adventures deserves a position in this list solely because of its stunning graphics. The game’s main objective is snowboarding which uses a decent physics engine to offer realistic game dynamics. There are around 180 different levels that you can play to master the game and I can vouch it’s not easy. The weather changes just like in real life and thunderstorms, blizzards, fog, shooting stars make the game more interesting. Alto’s Adventures is available on the App Store for $4.99. 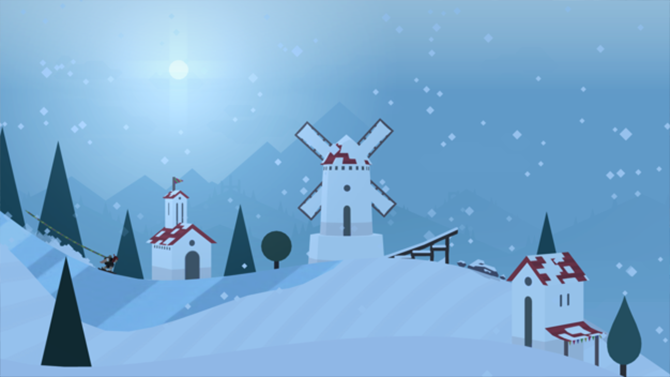 Badland – Apple’s Game of the Year, is a side-scrolling (like the flappy bird), action-adventure game set in a forest-like environment. The visuals alone would trap you in the gameplay and the story is so engaging with its unique puzzles and obstacles. It supports multiplayer with up to 4 players on a single device. The single-player mode has more than 100 levels and the level editor lets you design your own mazes and levels. 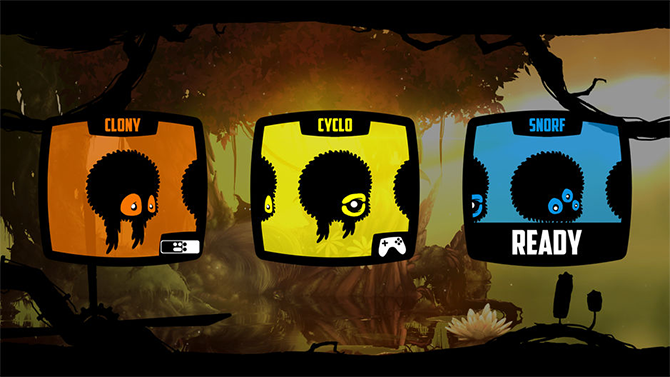 If you’ve ever played an RPG you probably know how this one looks and feels like. It’s strikingly similar to the Legend of Zelda, right down to the overarching plot of a young boy with a past on a dangerous quest to reclaim the kingdom. It might feel like Zelda clone but a few mins in you feel how different it really is even though it’s skinned to look like one. It pays homage and stands on its own. It’s probably the only Nintendo-like game for the Apple TV. 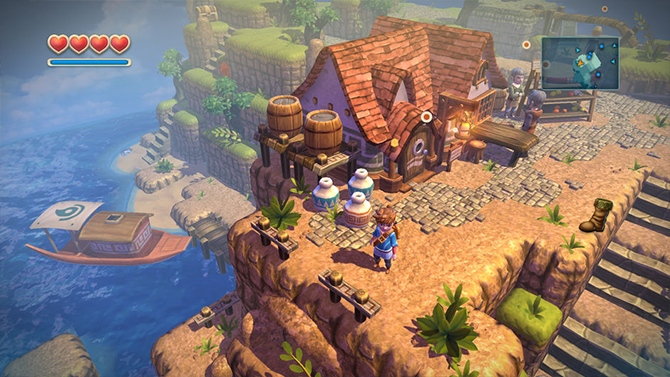 Snowboard Party brings the thrill of snowboarding to your TV. To ride the downhill slopes at extreme speed and catch some big air to perform the craziest tricks in 21 completely unique adrenaline-filled mountains/locations is nuts. This game has a few different modes like Time attack, Freestyle, Big air, Half Pipe and Multiplayer. 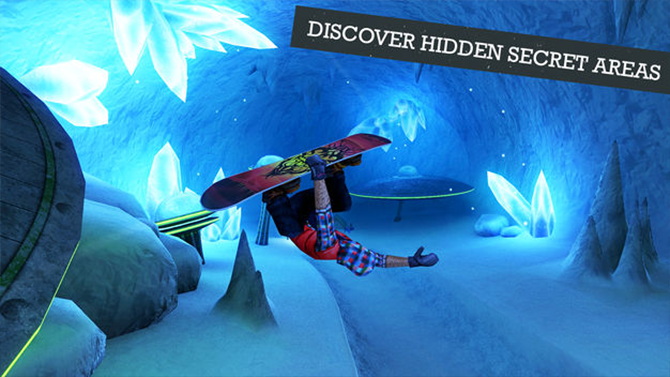 Riptide GP2 a popular game on Android and iOS is also available for your Apple TV. The objective of the game is to efficiently run a water boat water while doing several tricks and beating your opponent at the same time. There are a few different modes like online multiplayer, Career mode and challenge friends. Honing your skills in Career Mode or challenge your friends by racing online with the Game Center or local multiplayer mode with a split-screen offers the best gaming experience on the Apple TV. 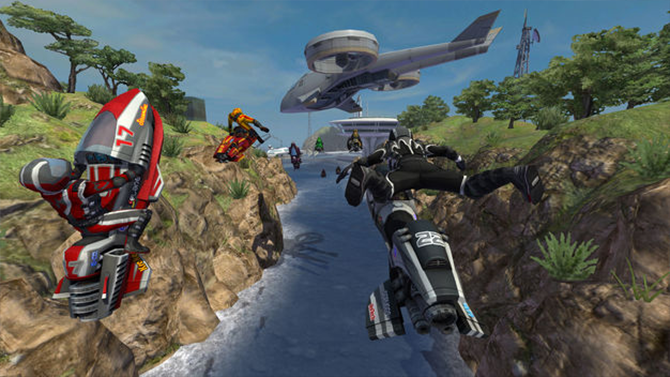 I love playing Duet on my Android smartphone and now, I love playing it on the bigger screen as well. Your goal in Duet Game is to keep your two dots safe by not letting them touch any of the obstacles. You rotate the sphere left and right by tapping your thumbs to move the vessels around the obstacles that appear. Like all games, as you move up the ladder the game becomes more channeling. But my favorite feature of the duet is the Official soundtrack, for some reason, it helps me focus a lot. 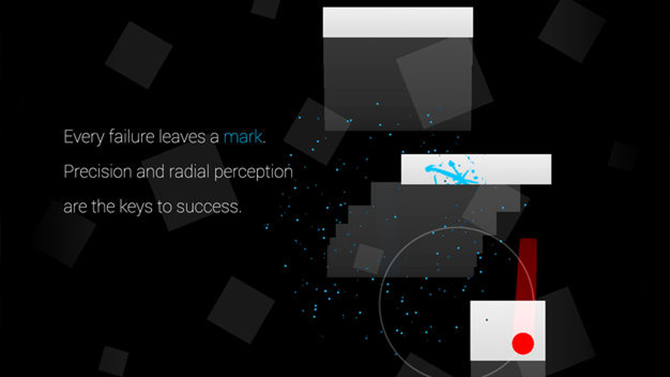 If you’re anything like me you’ve played hours of FIFA or PES on mobile PvP. This gorgeous 16-bit pixel art game brings back that joy of playing with your friends. The game is fast-paced and energetic, unlike FIFA or PES. The controls are tight and responsive for Apple TV as well. It has all the tournaments and leagues but with different names of course because of the licensing restrictions. If you love playing football, this game is worth a buy. 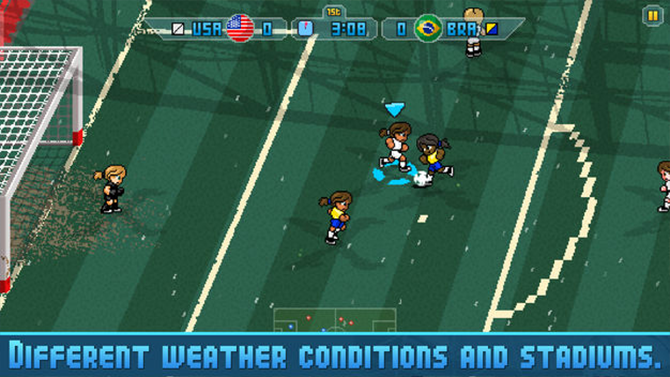 Made by the Indie developers supergiant games who made Bastion which also features isometric point of view type role-playing elements. Transistor is a science fiction RPG where you play as red and is narrated by the weapon you wield. Transistor is beautifully designed with hand drew character models and has an in-depth combat system where you strategically mix and match power-ups in a unique fashion that sets this one apart from the crowd. It has Blade Runner feel to it with a bit more video game edge. Well written characters and an original story this one is well worth your time. 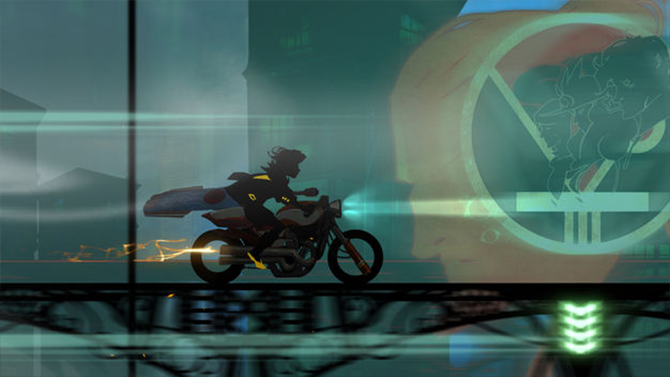 If you haven’t gotten a chance to play it on console this is a fantastic game with progressive layered puzzle designs. Playdead’s second game after limbo is an atmospheric puzzle game with Dark and dreary environments and subtle storytelling with its world design. Inside is 2 and a half D where you interact with elements that are 3D objects but the controls are very intuitive so you’re not exactly fumbling with your TV remote. The gameplay is of roughly two hours and I finished it when it was released and it still excites me today. 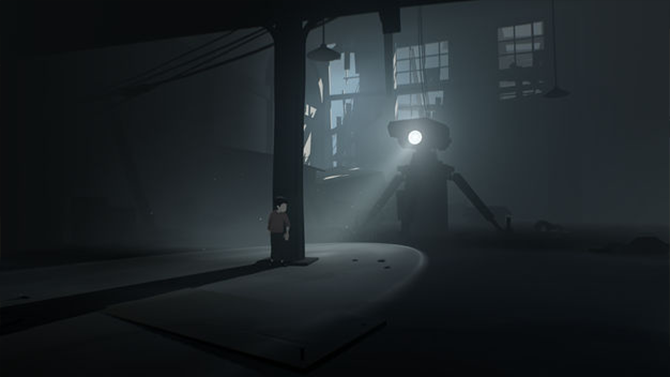 It’s part of the Go trilogy from Square Enix and by and large the best one. The music and sound are soft and pleasant. Its a finely crafted puzzler that has a turn-based style to it. The puzzles get more progressively complex making you think creatively and several moves ahead to solve them. More importantly, it really retains the spirit of Lara Croft with jumping, shooting and puzzle solving in her signature style. 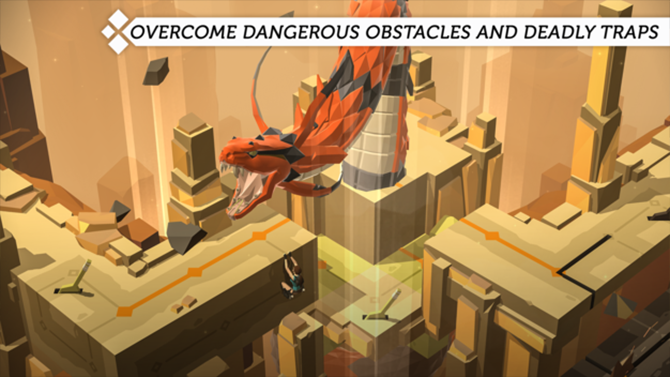 believe me, when I say this, you’ve never played a game like this. Lumino City is not a traditionally animated game but it is a handcrafted piece of art. All the elements in the game are made of paper, cards, miniature lights and motors. Not just the unusual choice of graphics, it also packs in an interesting storyline where you try to solve puzzles and find the protagonists missing father. The puzzles are particularly interesting because you use real objects to solve them and it involves interesting physics. You can explore the city to find hidden details that are as fun as the main gameplay. Lumino City is an excellent choice if you want a game that is fresh and enticing. It is available for Apple TV on the App Store. 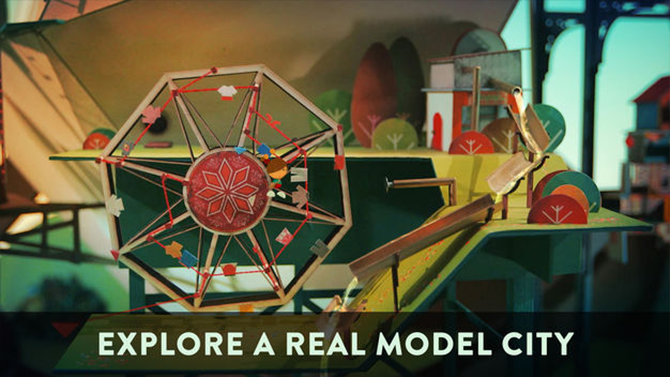 Hidden Folks is maybe the most intense Where’s Waldo game you’ll play, with a heap of moving parts you need to find a few things and people in each stage which gets bigger and bigger with lots of movement and animation. The reason it does get harder is that of its B&W aesthetic. This makes you kinda really hunt for each thing you need to find. Levels are dense with different themes and things happening at any given time. This makes you really appreciate the level design which is outstanding. 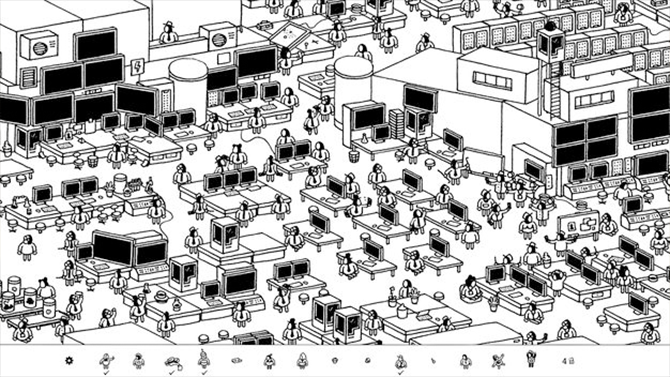 Tim Schafer is known for his point and clicks adventures like Grim Fandango, Full Throttle and Day of the tentacle. It’s filled with the same kind of surreal dark humor you’d expect if you’ve played the others. You’re moving around by tapping on the screen and interacting with an object, analyzing them and talk to NPCs to get the plot moving or to get to know the lore. It’s well worth your time if you’ve never played any Tim Schafer’s games with one caveat where his point and click adventures are a slow burn type of game where you appreciate the story and characters more instead of the action. It works brilliantly with the Siri Remote. 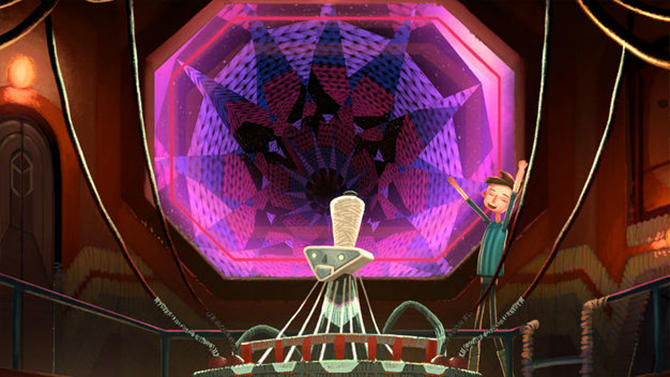 I have listed the most popular games from every Genre and you can try all of these games when you’re relaxing with your family and need a fun activity. Games like Crossy Road, PacMan, Angry Birds Go are more fun with friends, while Lara Croft, MC5, and Lego Batman are more intensive games. Tell us which games are your favorite and if I missed any of yours on this list.

How to Remove Background Noise to Get Better...

How to Remove Shortcut Arrow Overlay on Windows...

How to use Zoom With Slack Seamlessly

How to Center Taskbar Icons in Windows 10

How to Find Which Apps are Trending In...

How to Check How Much Data Is Left...