In the past few years, Realme has emerged as the top contenders in the mid-range smartphone segment. Being an Oppo subsidiary, for long their phones carried the old ColorOS. But with Android 10, Realme has come up with its own OS – the Realme UI. Apart from aesthetic changes, features like system-wide dark mode, Personal Information Protection, Focus Mode, fluent and aesthetically pleasing fingerprint animations really caught my attention. Additionally, there are several other features that really enhance your usage, so without further ado, let’s jump right into it.

The first phone to get Realme UI was the Realme 3 Pro and after a phased rollout, I recently got it on my Realme XT as well. Before we get to Realme UI’s top features overview, below is the roadmap for Realme UI update on other Realme phones. In case you want to manually install Realme UI on your phone, skip to this section for detailed instructions. 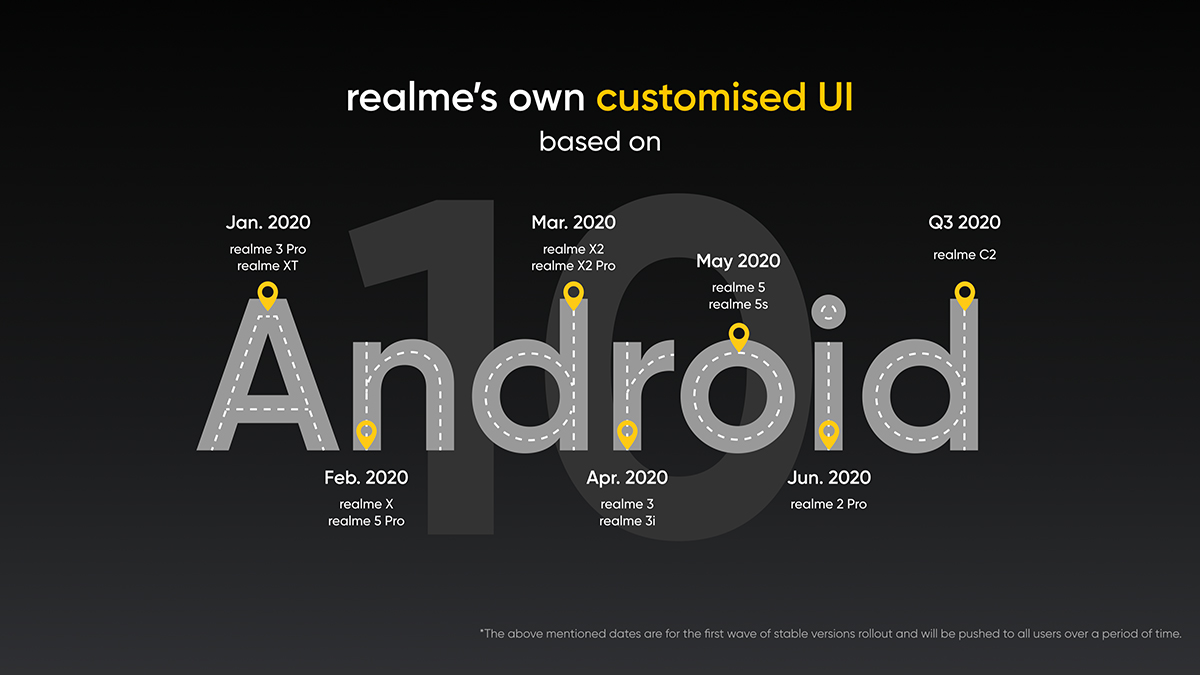 Realme has managed to seize this opportunity well and visual changes are the most apparent. Although it still isn’t close to stock Android, I think they’ve managed to pull something similar. Foremost, you can see the subtle color scheme and minimal layout. Just like Android 10, you have the ability to customize icons. Scroll down the “Home Screen & Lock Screen Magazine settings” and tap on “Set Icon Style”.

The default option gives you round, bold icons but you can always switch to the material style which is squarer and sharper. In addition to that, you can customize the icon shape by manually tweaking the roundness of the corners, icon size, and foreground size. 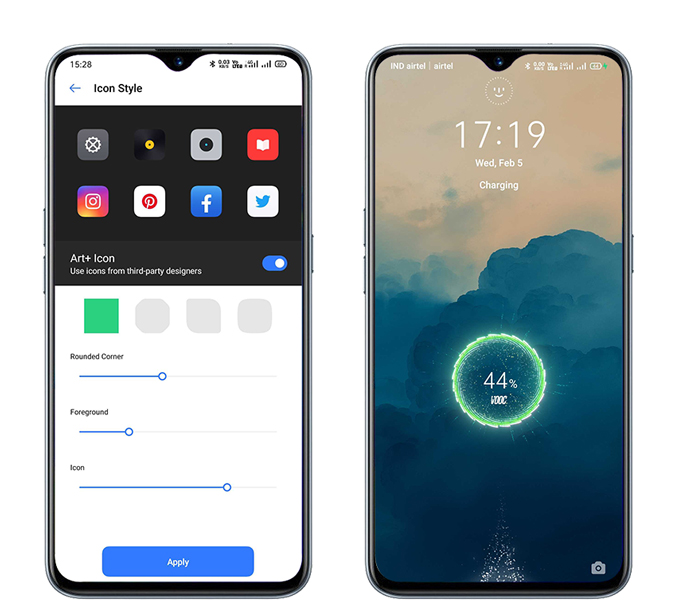 Dark Mode was already an option since Color OS 6. But, back then, it was a beta feature in the Realme Lab section. Now, it can be directly found in the display settings with extra customizations. Firstly you can choose to enable and disable dark mode automatically from sunrise to sunset. You can also schedule a custom start and end time which comes in handy for many users. In case you are not fond of the dark mode like me, the old option to disable dark mode for specific third-party apps is still intact. 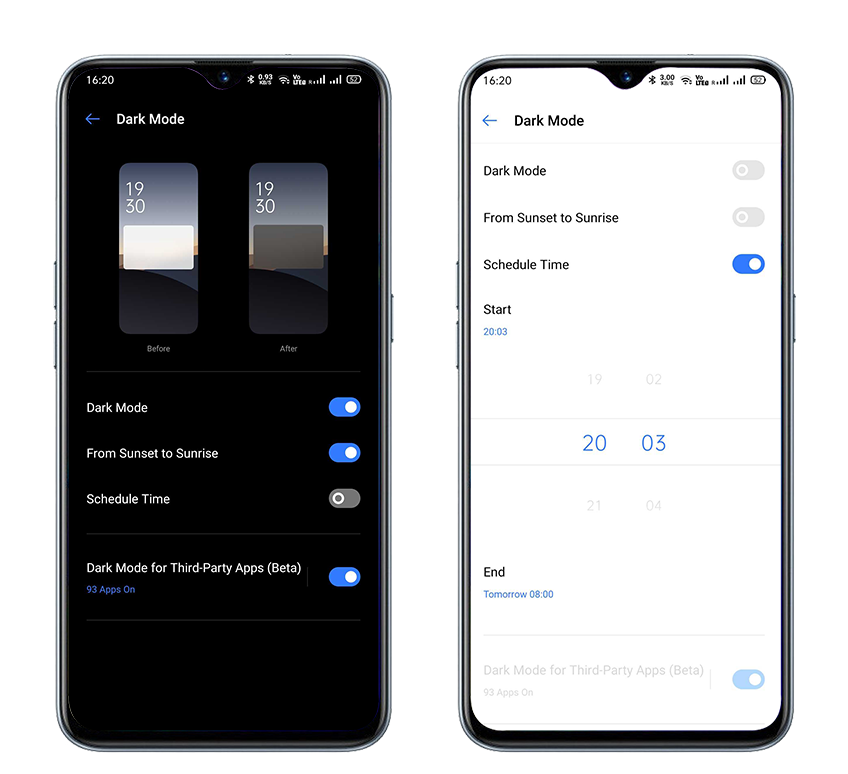 Whether you’re playing PUBG or you want to record a potential bug (:P), screen recording is one function that comes really handy. In Realme UI, you can do that as well as record internal audio. To do that, enable Record System Sounds under the Screen Recording option. Apart from that, there is also an option to include front camera recording. This would really come in handy for live-streamers.

To start screen recording, you can either quick-start recording from the notification drawer or from the sidebar. In case you want to check messages or use some other app, you get a pause option too. Sounds pretty cool, right?

If you don’t find Screen Recording option in the control center, click on edit tiles and you’ll find it in the list. You can also access the same from the smart sidebar. 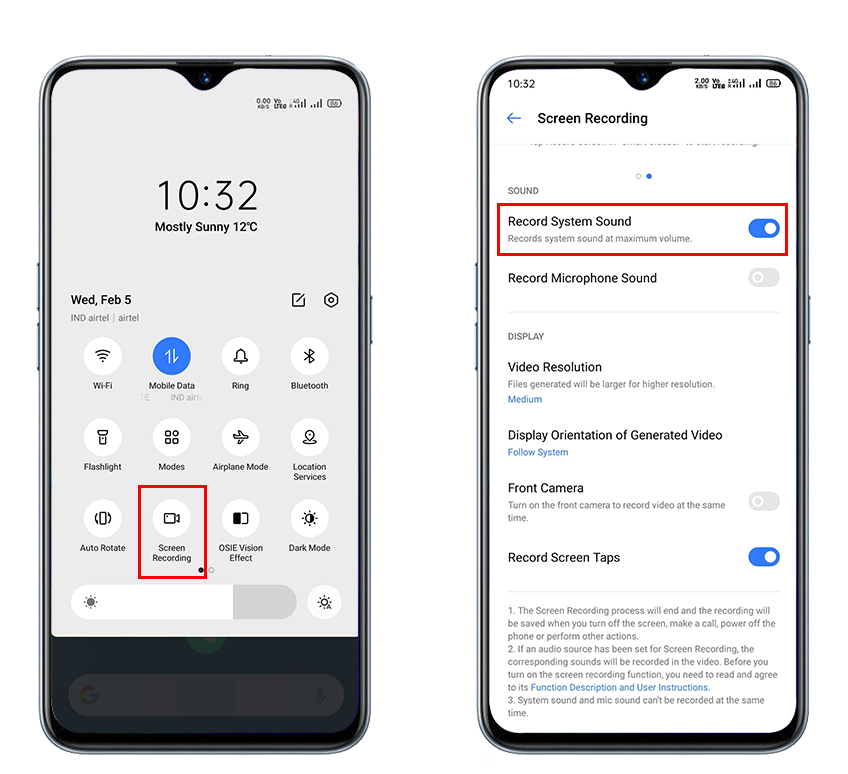 Floating Calculator is not a Realme UI feature per se. You can even find it on phones running ColorOS 7. To activate it, tap on the “Floating window” icon within the calculator app. There is also an option to set the transparency of the floating window. Moreover, the floating calculator can also be enabled from the notification drawer. This way you don’t need to minimize any app to use the calculator. It comes handy when you have to perform a quick calculation while browsing through the web. 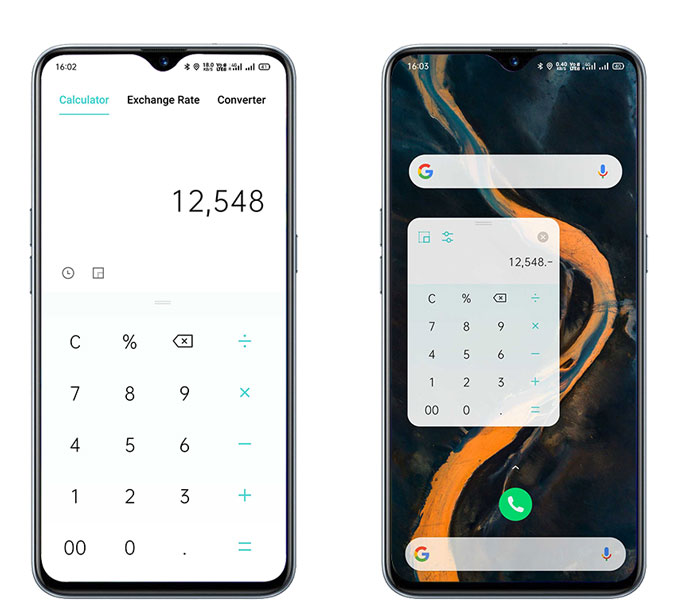 The three-finger screenshot already existed before. However, with the Realme UI, you get the added functionality to take a partial screenshot. You can do that by tapping on the screen with three fingers and then adjusting the selection accordingly. This eliminates the long hassle to edit and crop screenshots later.

There are also screenshot gestures in Realme UI. Now, you can quickly take a screenshot and then move the small preview window either upwards or downwards to take a long screenshot or share it accordingly. In case you hate the sound when taking a screenshot, like me, you can disable that from Sound & Vibration settings.

Downside: Even after disabling the screenshot crop option, it interferes with apps like Piano or Synth that require three fingers to operate. 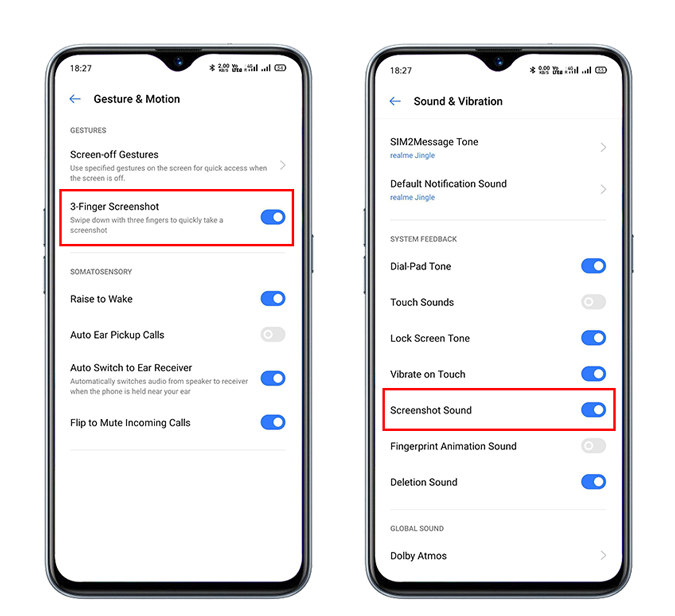 Realme Lab is where you can find a beta version(not stable) of features. In ColorOS 6, there was a beta dark mode which has now been replaced by the Dual Earphone feature. It basically lets you listen to the same audio on 2 different devices. Now, these 2 devices can be your Bluetooth and wired earphones.

You cannot listen to the same audio on 2 Bluetooth earphones

Moreover, you can also take calls on your wireless earphones while the audio would still uninterruptedly play on the wired earphones. So, it enables listening to music and taking calls simultaneously. I tried it with Realme Buds and Audio Technica ATH-M20x, though the connection was super easy, I found the music to be a bit delayed on the Bluetooth headset. 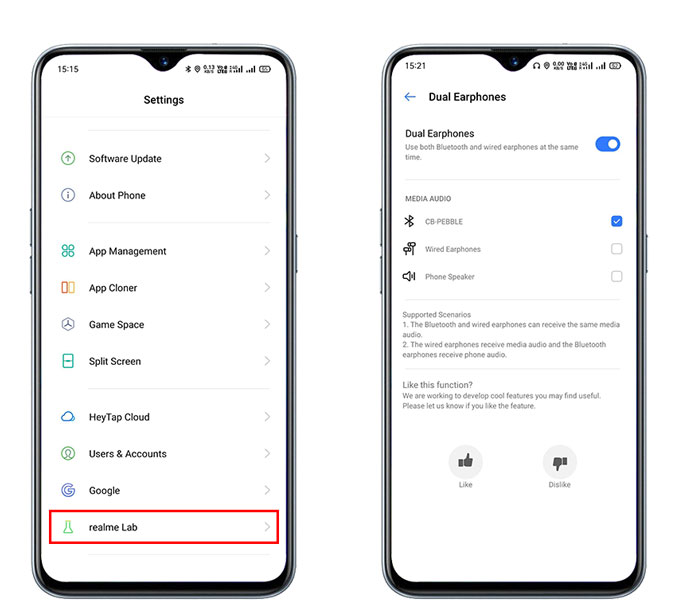 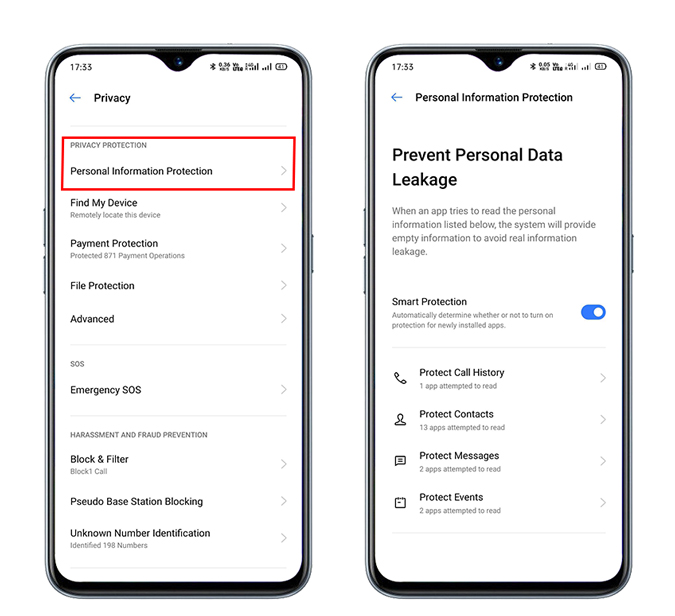 Apple users have enjoyed seamless file transfers for quite some time and now it’s Realme’s turn as well. Not exactly Realme but few brands such as Xiaomi, Oppo, and Vivo whose feature ultimately trickles down to Realme devices have partnered in “Peer-to-Peer Transmission Alliance”. This lets users send data wirelessly using Wi-Fi direct protocol at high speeds without the use of any third-party app.

I tried transferring photos and videos to a Xiaomi phone and the transfer was seamless. You just have to enable the Share option on both the devices from the notification drawer. Next, choose the file you have to share and click on the nearby device to transfer. It’s quick and easy but only available on limited devices. 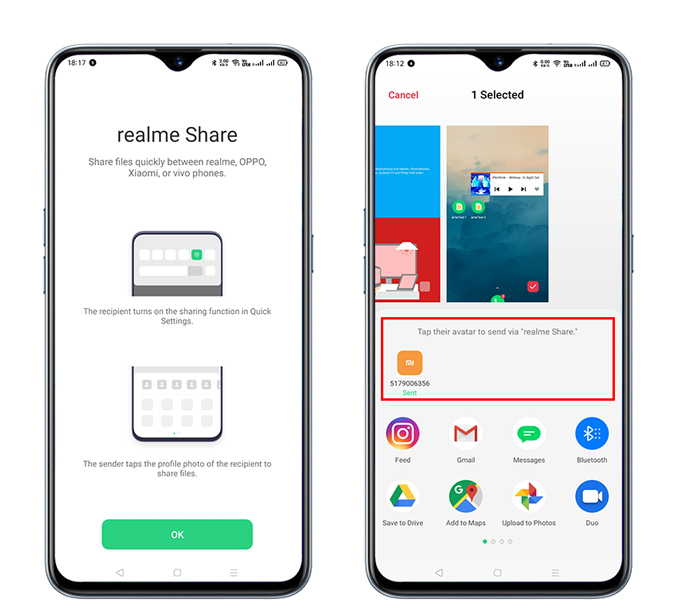 A major drawback that I found with my 6.4-inch tall Realme XT was the inability to reach the notification bar icons. That left me with no option but to use the other hand to adjust the brightness or open the Settings menu. Here, the RealmeUI seems to have learned. You drag the notification area twice and it will bring down the notification icons making them easily accessible with one hand. Similar to One UI, the brightness slider is also placed at the bottom. Besides that, there are date, time and weather details as well. 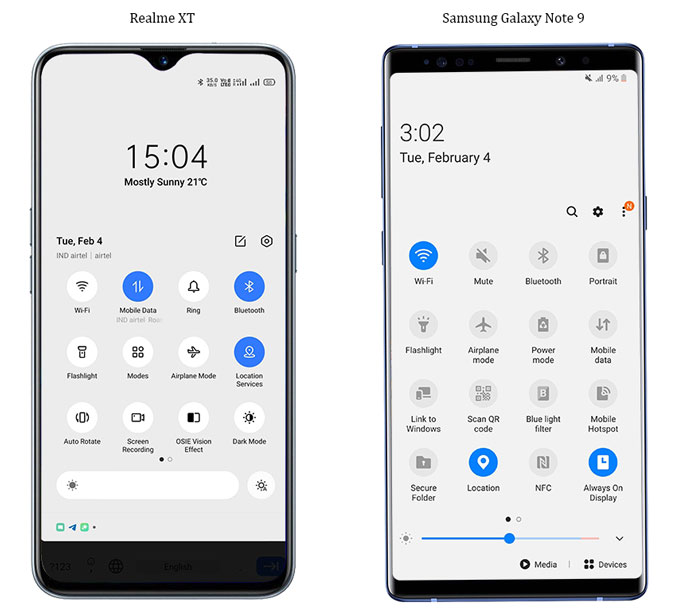 If you don’t like to press the power button every time you lock your phone, Realme UI has a new feature where you can simply double-tap the screen to lock your phone. You can enable this feature from the “Home Screen & Lock Screen Magazine“ section. Just scroll and enable Double Tap to Lock. Now whenever you tap twice in an empty area on the home screen, it’ll lock the device.

Apart from this, you can also enable Double Tap to Wake up which can be found in Convenience Tools under Gestures & Motions. There are several other gestures that you can enable such as Drawing V or O to enable the camera and flashlight. 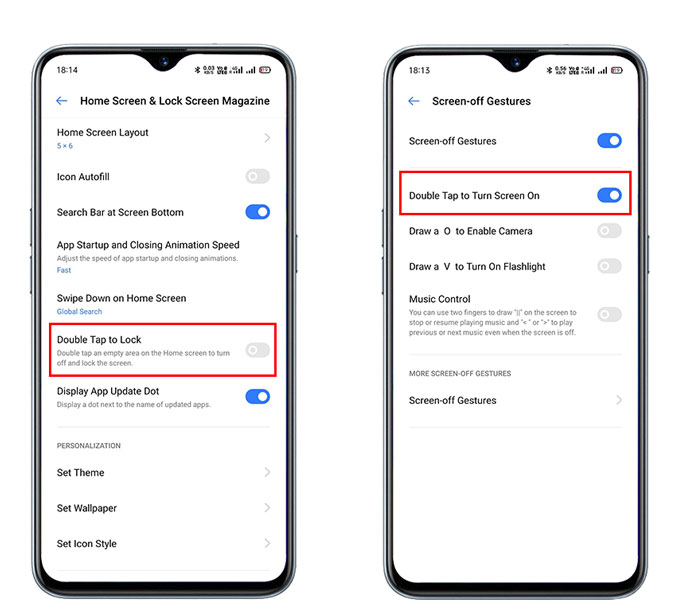 Inspired by OnePlus’s Oxygen OS and Samsung’s OneUI, Realme also brought a slew of new wallpapers in the Realme UI. They have already teased these new wallpapers beforehand and if you don’t use a custom image, they do look good. We have updated static wallpapers and also live wallpapers that change color according to the time of the day. There are also a few interactive wallpapers but I’d rather have something subtle to look at. So that’s out of the scene for me. 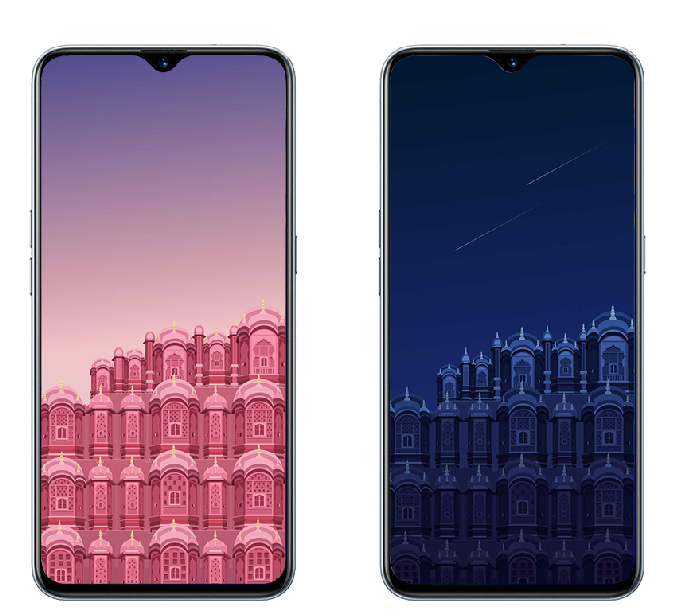 Similar to One Plus’s Zen mode, Realme UI has Focus Mode. It helps you be more productive and stop you from excessively using certain apps. You can access this by dragging down the control center and choosing Focus Mode by tapping on Modes. In Focus Mode, all messages and notifications are blocked. You can only turn on incoming call alerts from the Focus Mode settings.

To put an icing on the cake Realme UI also has inbuilt ambient noise, so you don’t need a separate app for that. I really liked Realme’s Focus Mode but it is still far from being One Plus’s Zen Mode. Zen Mode doesn’t let you waste time or even exit it irrespective of a full restart. 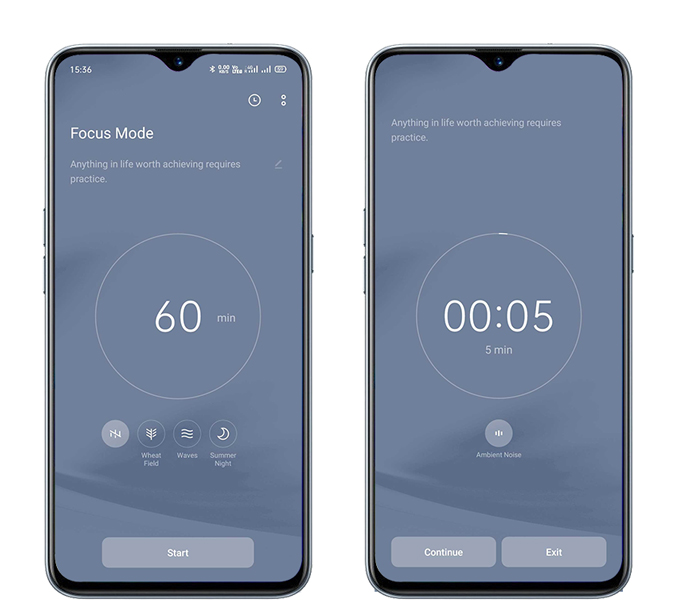 Previously in ColorOS, you had no option but to enter the Global Search when you swipe down on the home screen. But you can now change how it reacts. You can either have the same Global Search or choose the Control Center to be shown. It’s a small add on, but it sure does make a difference. 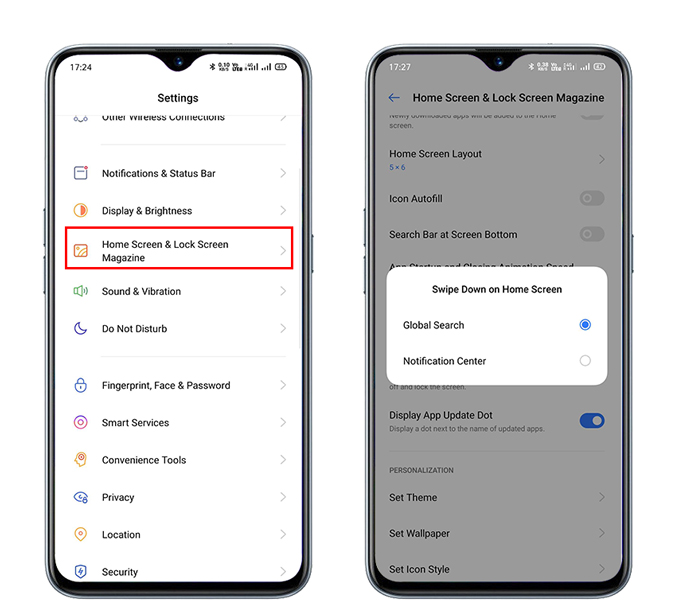 Sidebar comes in handy when you’re playing games or want to launch certain apps quickly. The new sidebar is more polished in design and adds tiny new features as well. You can now drag an app out of the sidebar to directly open it in a split-window. In addition to that, the floating window now supports more apps. You can tap on the circle option at the top to minimize the floating window just like Fb Messenger’s chat heads. 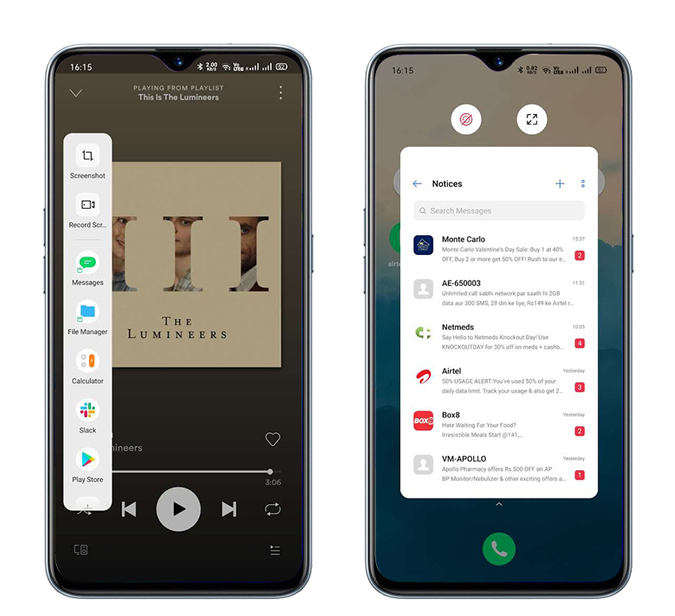 Although one-Handed Mode has been a feature for quite some time, accessing it from the control center has always been an issue. Realme UI has dealt with it in a better way by introducing a gesture. Now, you can try it right away by aking a pull-down gesture at the bottom of the screen. You can enable the “Pull Down to Enter One-Handed Mode” gesture from the Convenience Tools under the Navigation Buttons section. I know this doesn’t sound like a major update but when you actually need it, you have it in a swipe. 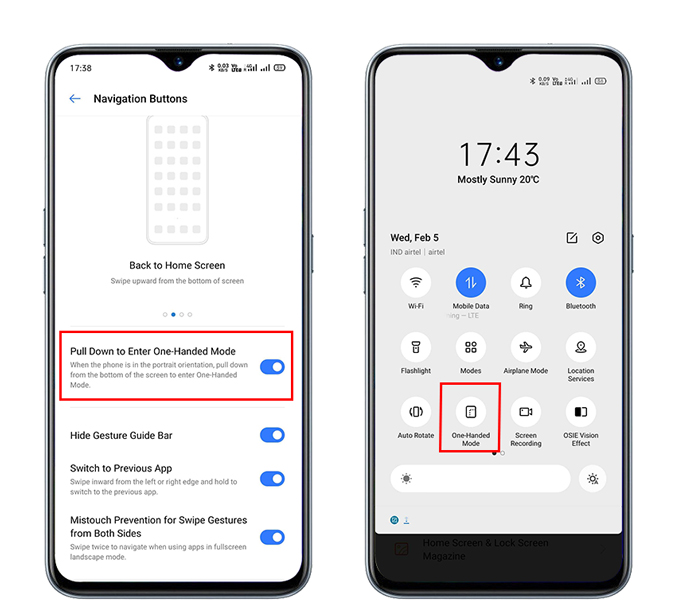 As of now, Realme UI is only available for Realme 3 Pro and Realme XT. The Realme UI is delivered in a phased manner but if you didn’t get the update, here is a simple method to install it manually. First of all, you need to download Realme UI for your phone.

Apart from these, there are many other subtle changes like edge-lighting on incoming calls, smart driving, riding mode, freeze apps running in the background, random MAC address generator to avoid targeted ads, etc. All of these Realme UI features I’ve listed have immensely helped me with my everyday work. However, Realme’s claim of a look and feel closer to stock Android is still far fetched. I still consider the first version of Realme UI as a stepping stone for the company.

So here was Realme UI’s top features overview, but if you have more such features that I might have missed, do leave a comment!

Vaibhav is a broadcast journalist who can live without tech for sure. That's exactly what doesn't make him a fan-boy of anything specific and his coverage non-biased. He writes about things he believes are actually helpful in some way to the user.