7 Best Teleprompter Apps for iPad To Try in 2020 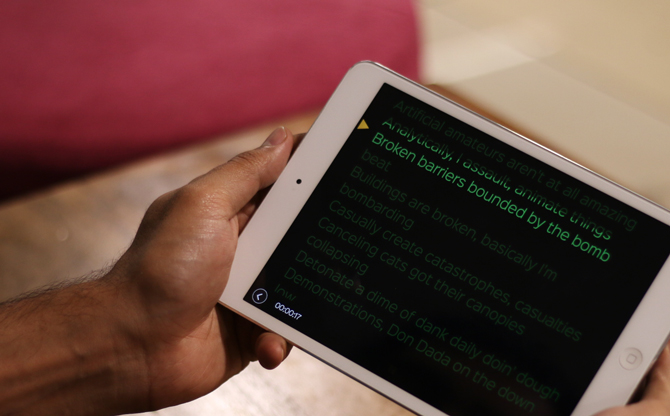 Whether you are practicing your presentation or making YouTube videos, having a teleprompter next to your camera can significantly boost your video production quality. Now, you can always buy a budget teleprompter from Amazon but you would still need a smartphone or a tablet to project the text through it. If you have an old iPad lying around why not use that instead? There are plenty of apps that can turn your iPhone or iPad into a useable teleprompter. Let’s begin.

In this article, we’ll check out all kinds of teleprompter apps that offer different levels of functionalities. We would start with a basic app that runs the text on the screen and move to apps that have additional features such as mirroring, voice control, remote control, video recording, etc.

It’s worth point out that the inbuilt Pages app on your iPad has a hidden teleprompter mode. Simply, open your script in the Pages app, tap on the Options icon on the top right, next select the Presenter Mode to start the teleprompter.

It is not a replacement for a teleprompter but you can still make it work by manually scrolling it and placing it next to the camera.

Parrot Teleprompter much like the bird it is named after lets you recite your entire script in front of the camera. It can mirror, adjust speed and size, and loop the entire script. You can also change the background and the font color as per your requirement. The toggle marker is a good addition as it constantly shows your position on the script with a highlighter mark on the screen. Parrot also makes their own teleprompter hardware as well.

You can even connect your Dropbox account and import your scripts directly to the app. The only limitation of this app is that once the script starts rolling on the screen, you can only control it manually. This honestly is a minor inconvenience that can be easily solved by the next app.

PromptSmart app has all the basic features of a teleprompter, it offers a variety of text customization, has a mirror mode, and the background is Camera friendly. The main feature of this app is, VoiceTrack™. The app would automatically scroll the script as you read it out loud in front of a camera, pretty innovative right?

I tested it extensively and it works really well. Even if you go off the script a little and then catch up with the text on the screen, the app still continues as usual. VoiceTrack™ is built into the app and you don’t need an internet connection to use it. The app is free to use but if you want a truly seamless experience then shell out $20 and get the Pro version, you’ll thank me later.

Using a voice-controlled teleprompter app is great but if your video producer requires more control over the takes then you should give OnCue Teleprompter app a chance. It takes a more traditional approach and offers a remote control feature to control the text rolling on the screen. You will need two devices to make this work and run one device as a server and the other as a client. This will give the server app full control of how the text rolls on the client screen.

Apart from that, the app includes a Rich text editor, an option to change fonts, adjust text size. You can add emotion cues by changing the color of individual words, adding depth to the script. OnCue Teleprompter app is free on the App Store.

The app is free to try and the full version is locked behind a $5 paywall which is totally worth it considering the amount of time it will save you between takes.

The previous app worked really well and you could control the teleprompter with an iPhone but what if you don’t have one. Well, there’s Teleprompter Premium which is a refined teleprompter app that lets you control the iPad app with a gaming controller, a Bluetooth Keyboard, and even from a web browser. You can import your scripts from the Files app which can be a word document, PDF, PowerPoint, text, etc. Other than that, it has all the standard features you’d expect from a teleprompter app such as mirrored text, adjustable text speed, and size, cue point, etc.

The reason why I recommend this app is that you, the presenter have complete control of the script and you can quickly jump to the previous section with just one tap with the remote control of your choice. I usually use Sony’s DUAL SHOCK 4 to control the script and it works flawlessly. The app is available for free but you would need to pay $14.99 to unlock a few premium features such as exporting RTF files, auto-captions, etc.

Video Teleprompter lite is a more advanced version of a teleprompter app with added features. You can import your scripts from your phone or cloud or even other apps. Once you choose your file and press next, you’ll get a prompt from the app to allow the camera. Yes, this app lets you record the video on the iPad with a teleprompter running right on the screen. You can see your preview with the prompter making the session easier to record.

One of the best features of this app that went missing on most teleprompter apps is the adjustable text area. While recording a video, you can move your script closer to the camera, so your eyes are looking directly at the lens while you record.

Another useful feature of this app is that you can use a Bluetooth keyboard or your Apple watch to control the speed and recording without touching the iPad. You get an app on the watch which pairs with the app during a session and instantly reacts to your commands. You can tap on the Bluetooth icon on the bottom left, right next to the gear icon. This feature is only available in the premium version, though. Your saved recordings are automatically saved to Photos and you can share them from there.

These are the features of the premium version offers different formatting and colors to the script, keyboard control, you can import the scripts directly, and remove the watermark.

Video Teleprompter lite is great but the text covers the entire screen and can be a little distracting and the next app has a creative solution to this problem.

The rhetorician app takes the wheel and reinvents it. Instead of a traditional teleprompter app where you get a wall of text, this app breaks down the entire process into four major parts; editing, direction, shooting and watching. You start by importing a script to the app, after that the app automatically breaks down the entire script into individual lines. Once you have the lines, you can assign time and emotion to each dialog which would ensure you have visual cues to guide through the scene.

You can use either of the iPad’s cameras to record the video, the app shows a countdown for each dialog. Once, you have recorded the takes, watch it, and finalize what to keep and what to discard. This app is useful for small creators who want a comprehensive tool to record videos with an inbuilt teleprompter. Rhetorician is free on the App Store and you can unlock all the features for just $2.

I am pretty confident that the apps mentioned above are decent enough to act as a makeshift Teleprompter. A real teleprompter would make a significant difference as it is professionally built and you can look directly into the camera while reading out your lines. There are plenty of budget teleprompters out there and Amazon would be your first step to start the search.

We use the Glide Gear TMP100 for the Techwiser YouTube channel. It is lightweight and compatible with most camera setup. The glass is a 70/30 standard beam split glass which ensures the camera doesn’t record any of the texts. And the best part is, there is no assembling required. You just take it out of the bag it comes with, mount it on the tripod and you are good to go. The entire process takes less than 5 minutes. It doesn’t have its own display and you can use any smartphone or iPad to act as the display (up to 10.5 inches). You can get it for $200. 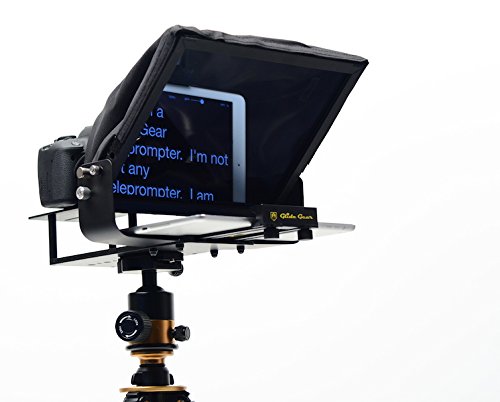 Which are the Best Teleprompter Apps for iPad?

I personally prefer Parrot as a standalone teleprompter app for iPad because it has all the essential features of a teleprompter like mirroring, speed, and text adjustment. However, Prompster and Teleprompter Pro Lite do the job just as well. For a Video Teleprompter app, Promptsmart Lite Works great. Which app did you like the most and how well-scripted videos did you make?

Also Read: Use Android and iPad as an External Monitor for your DSLR