9 Tips to Use Taskbar in Samsung Galaxy Fold Phones 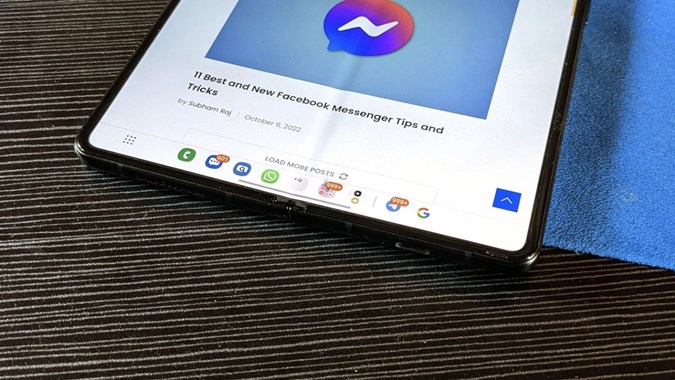 In order to use the taskbar on your Galaxy Fold phone, you must first enable it.

1. Open the inner display of your Samsung Galaxy Fold phone and launch the Settings app.

Note: The Taskbar option in settings will appear greyed out if you open it from the cover screen.

2. Go to Display. Scroll down and tap on Taskbar.

3. Enable the toggle next to Off on the next screen to turn it on. That’s it.

You will at once see the taskbar at the bottom of the screen. Tap on any app to open it.

2. Add Apps to the Taskbar

The taskbar of your Galaxy Fold phone can show 8 apps — 6 pinned apps and two recent apps. The pinned or selected apps show on the left side and the recent apps appear on the right side. This is how the Dock (taskbar) works in the macOS.

Basically, the pinned apps are taken from the apps that appear at the bottom of your home screen aka dock on your phone’s inner display. These apps are mirrored on the taskbar. Sadly, you cannot have a distinct set of apps in the taskbar and the home screen’s dock.

Therefore, to pin an app to the taskbar, you must pin it to the dock. To do so, go to your Fold phone’s home screen on the inner display. Then, drag the app or a folder to the dock.

That’s it. Now, open any app to view the taskbar and the newly added app will show up.

As mentioned above, the recently opened apps will show up on the right side of the taskbar. You can enable or disable this feature from the taskbar settings.

One of the interesting features of the taskbar is that it lets you open pinned or recent apps in a split screen or pop-up view quickly.

1. Open the first app on your phone.

2. Then, touch and hold the app icon in the taskbar and drag it to the left, right, bottom, or top edge to open in split-screen mode with the first app.

3. To put an app in pop-up view, touch and hold its icon in the taskbar and then drag it towards the center of the screen. Leave the app when you see the Drag here for the pop-up view window.

Pro Tip: You can put up to 3 apps in split-screen mode on your Samsung Galaxy Fold 3+ series phones. Know more about similar tips for split-screen on Samsung phones.

Earlier, the app pair could only be added to the Galaxy Fold’s Edge panel. But, now you can add it to the taskbar as well.

To add app pair to the taskbar, follow these steps:

1.  Open the desired apps in split-screen mode. Then, tap on the three-dot icon present in the center of the screen.

3. A pop-up window will show up asking where you want to put the app pair. Tap on Taskbar.

6. Open Any App From Taskbar

Want to quickly open any app (other than the pinned or recent apps) without leaving the current app? The All apps button in the taskbar will come to your rescue.

Tap on the 9-dotted icon at the left side of the taskbar to view all the installed apps in a pop-up menu. Tap on an app that you want to switch to. You can even use the search bar at the top to find the desired app.

7. Open Any App in Split Screen or Pop-up View From Taskbar

Using the All apps button in the taskbar, you can put any installed app in split-screen or pop-up view mode.

Tap on the 9-dotted icon in the taskbar to open the All apps screen. Then, touch and hold the app icon, and drag it towards any edge to open it in split-screen view. Or, drag it to the middle of the screen to open it in the pop-up view.

If you don’t want to see the taskbar in any app, you can hide it temporarily. For that, simply touch and hold any empty space on the taskbar. The taskbar will vanish immediately.

To bring the taskbar back, again touch and hold the bottom of the screen (the area where the taskbar usually shows up) and it will come back.

In case the feature doesn’t work, go to Settings > Display > Taskbar. Enable the toggle next to Show and hide with touch and hold.

To completely disable the taskbar on your Galaxy Fold phone, go to Settings > Display > Taskbar. Turn off the toggle next to On.

Few things to know about the taskbar feature of the Samsung Galaxy Fold series:

Make the Most of Your Samsung Galaxy Fold Phone