When it comes to best Android launchers, apps like Nova Launcher, Action Launcher and of course Google Now Launcher are among the few names that come in mind. And while all of these are great launchers with a ton of customization, they all feel quite similar in terms of homescreen and app drawer.

But there are few unique launchers, that don’t look the same and can transform the entire look of your home screen. And here are some of the best among them.

ap15 is one of the minimal launchers that have chosen a completely different design language. There is no separate home screen and app drawer, all your apps are located on your home screen on a single scrollable page. The apps are placed in the text format with no icons. This launcher doesn’t have widgets and doesn’t need any wallpapers.

The more you use the app, the bigger the text of that app will be. Other than that, you get a few options to change the background color, text color, changing font, hide the apps you don’t want to show on the home screen & remove the top notification bar, etc. 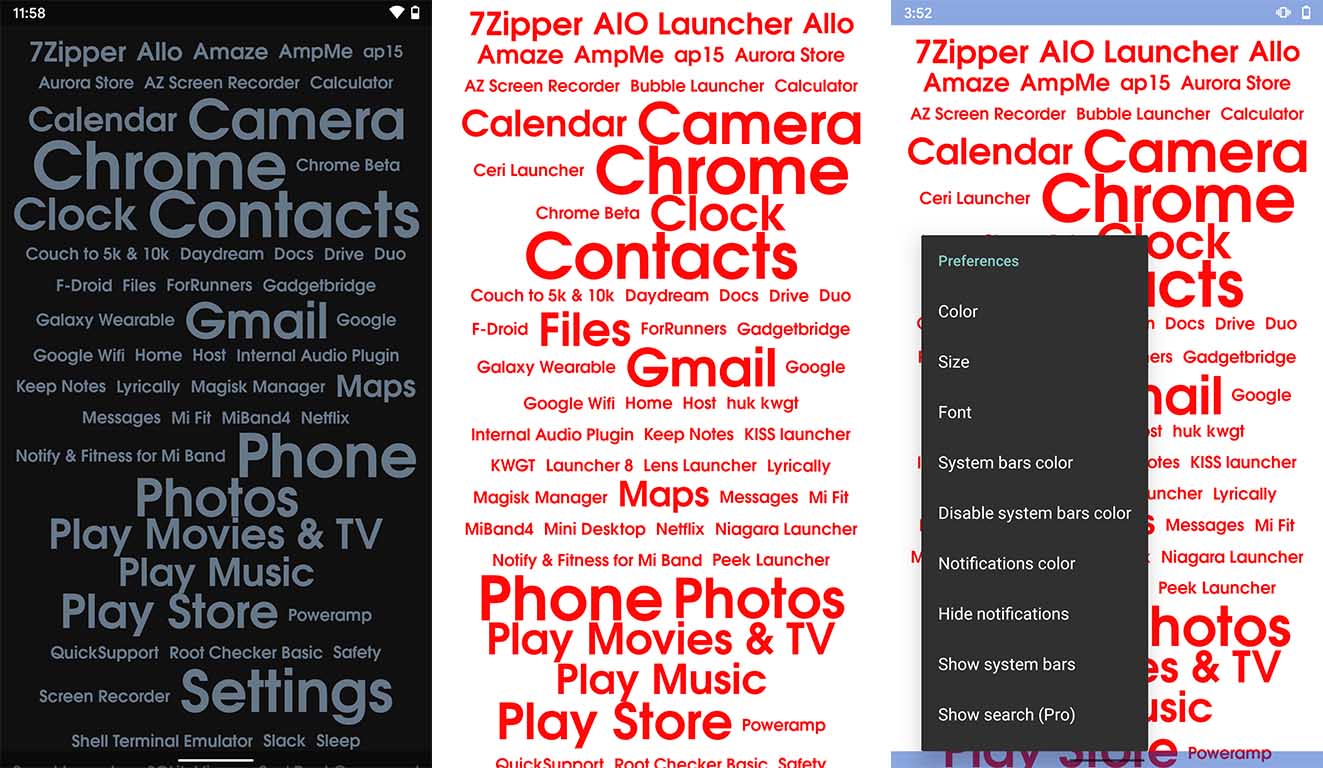 Niagara launcher is one of the latest launchers and gets updated frequently. The main purpose of the launcher is to keep every app reachable and can access them fastly when needed.

The Home page of this launcher is just the text of your favorite apps which you can save up to 12 of them. And you can also find an alphabet sidebar at the right, which you can slide through and find the apps instantly. You can add 1 widget along with favorite apps on the home screen and also can set the wallpaper of your liking.

This launcher feels fluid and it is one sleek modern looking launcher which has really good use case to use in a day to day life. 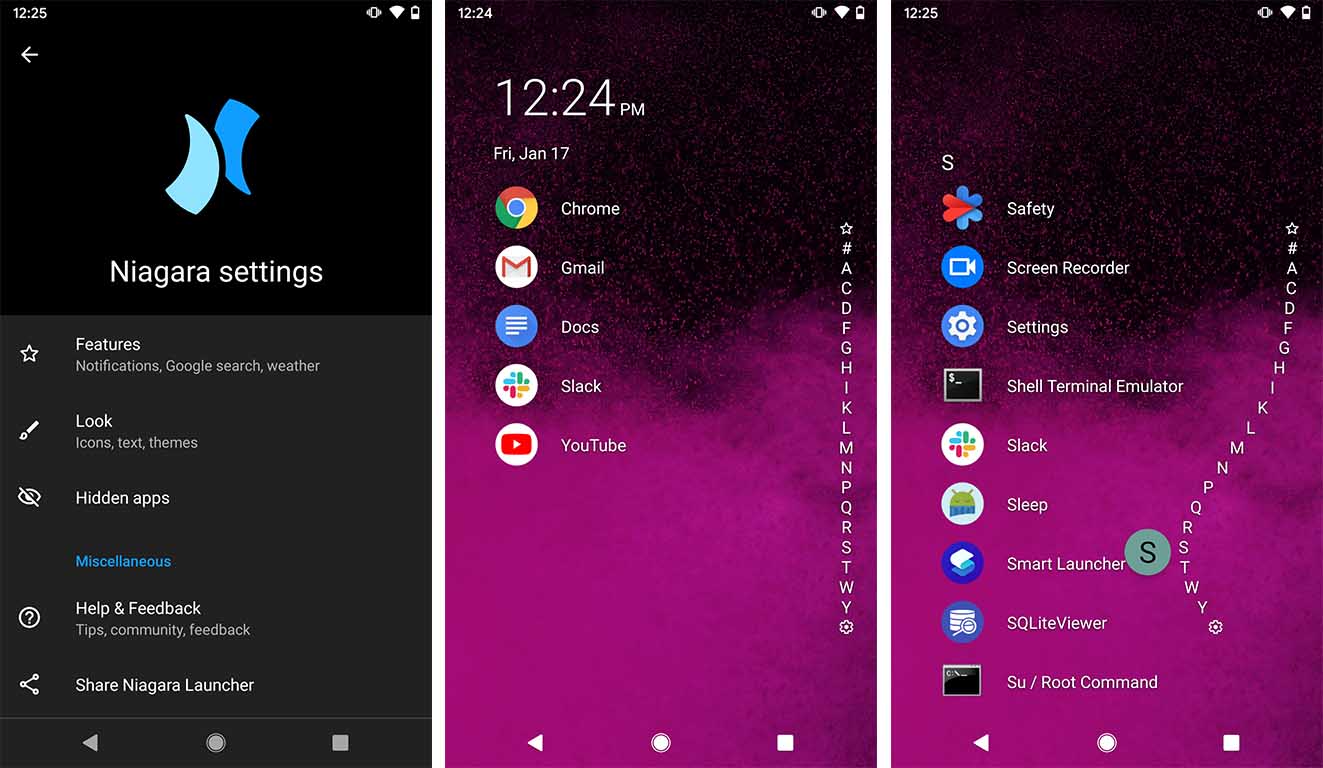 You can find frequently used apps, notifications, time, weather, date, alarms, timers, mails, calendar events, Google feed, Twitter feed, audio recorded, quick actions like Wi-Fi, Bluetooth, etc. The sole purpose of this app is to give a birds-eye view of what is happening on your phone and all the important things on a single home page.

To find apps, you can swipe from the left where you can see all the apps in a hamburger menu or you can click on the search icon to search for the apps.

More than functionality, this launcher provides you a futuristic-looking design for the home screen. 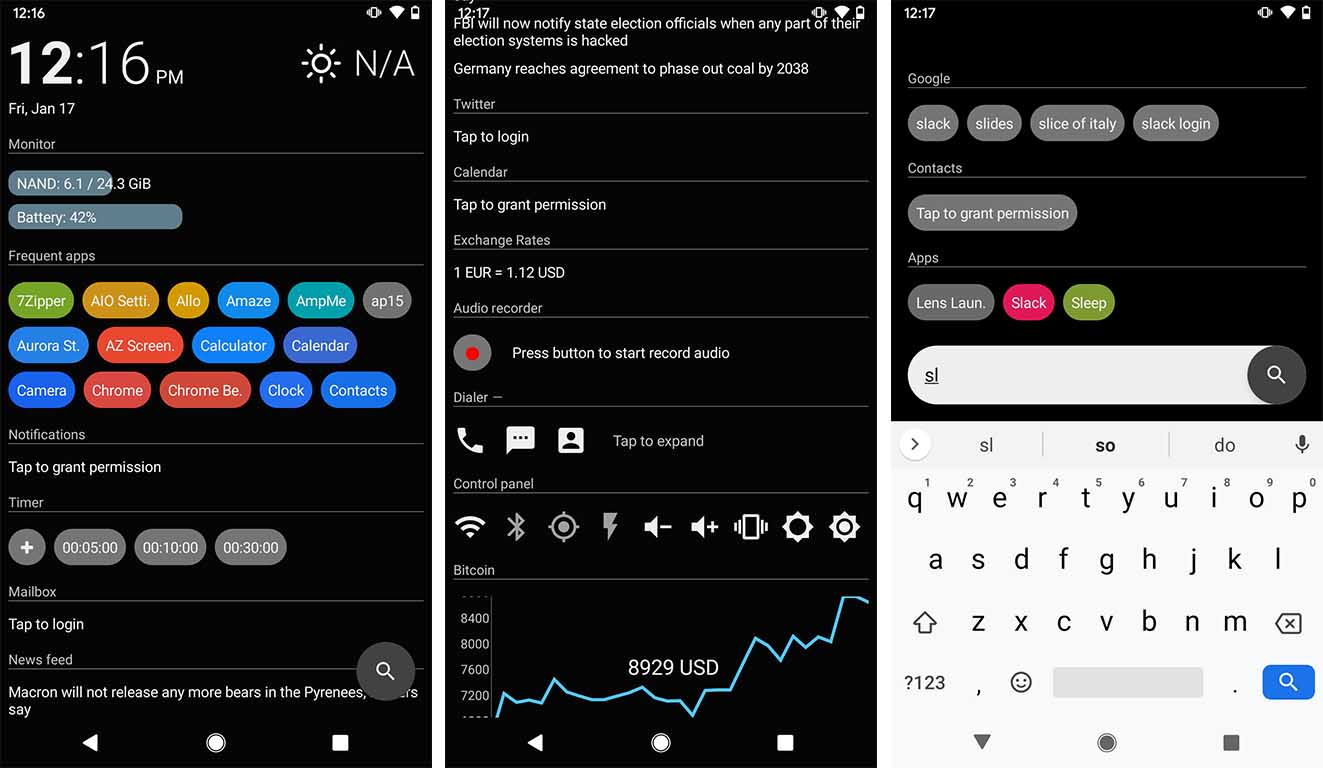 Lens launcher provides a weird functionality that is actually useful. The home page of the app is just filled with all the apps you installed in a small form factor.

But you can swipe with your finger to make bigger just like viewing with the lens. You can adjust icon size, distortion factor and scale factor in the settings according to your needs. This may feel kind of a gimmick, but definitely, you can find and open the app much faster. This also works like fluid which is really important for launchers like these.

But it doesn’t offer any settings more than that expect hiding the apps from the home screen and changing the Icon pack. For the uniqueness and feature it offers, low customization is not a problem. 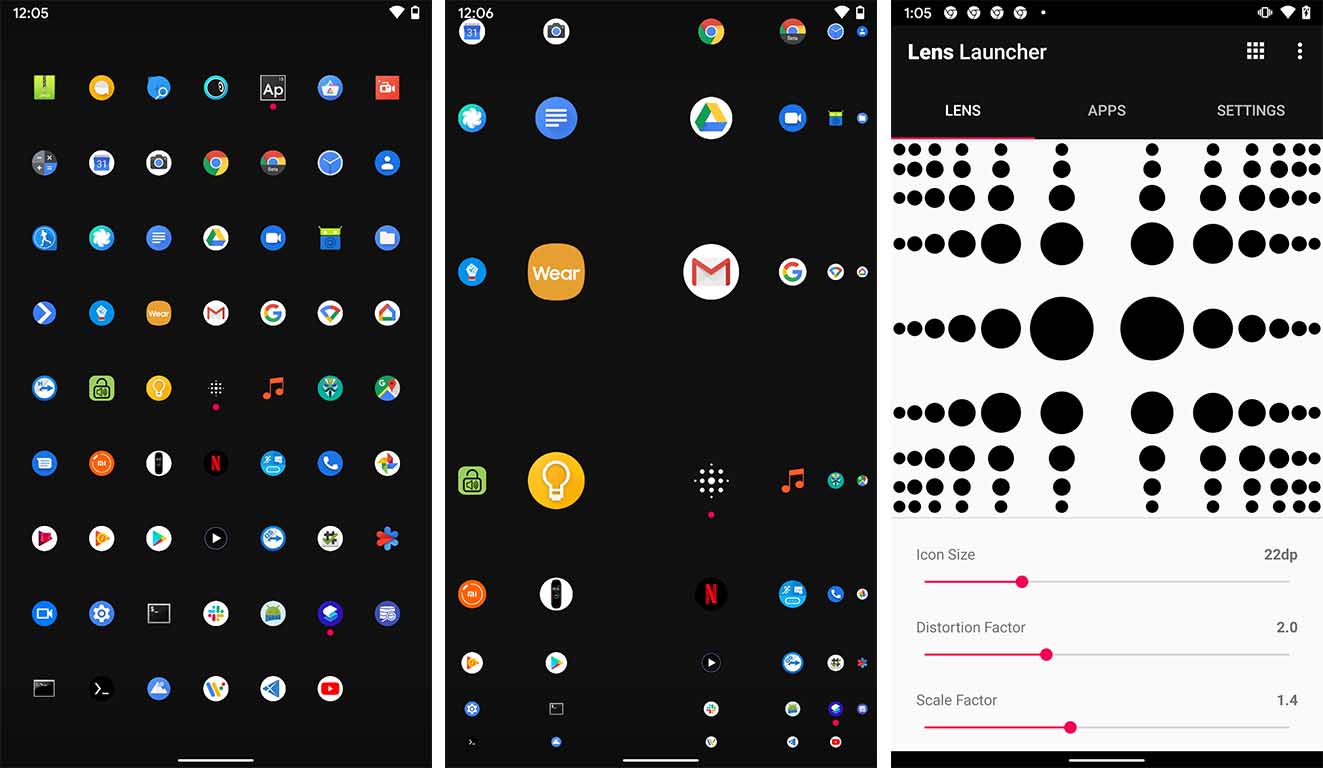 Peek launcher is another unique launcher that is just made to launch apps and nothing more than that.

You get the dialer keyboard at the bottom and two rows of frequently used apps at the top. You can access the frequently used apps normally, and for the remaining apps, you can just start searching with the dialer keyboard. For example, if I wanted to open Youtube, I will click on number 9 and launcher automatically shows you the apps which started with W, X, Y, Z as they are the alphabets in the nine key.

If there are a number of apps installed with those letters, you can type the second key and so on. Anyhow, you can easily find the app within 2-3 taps. 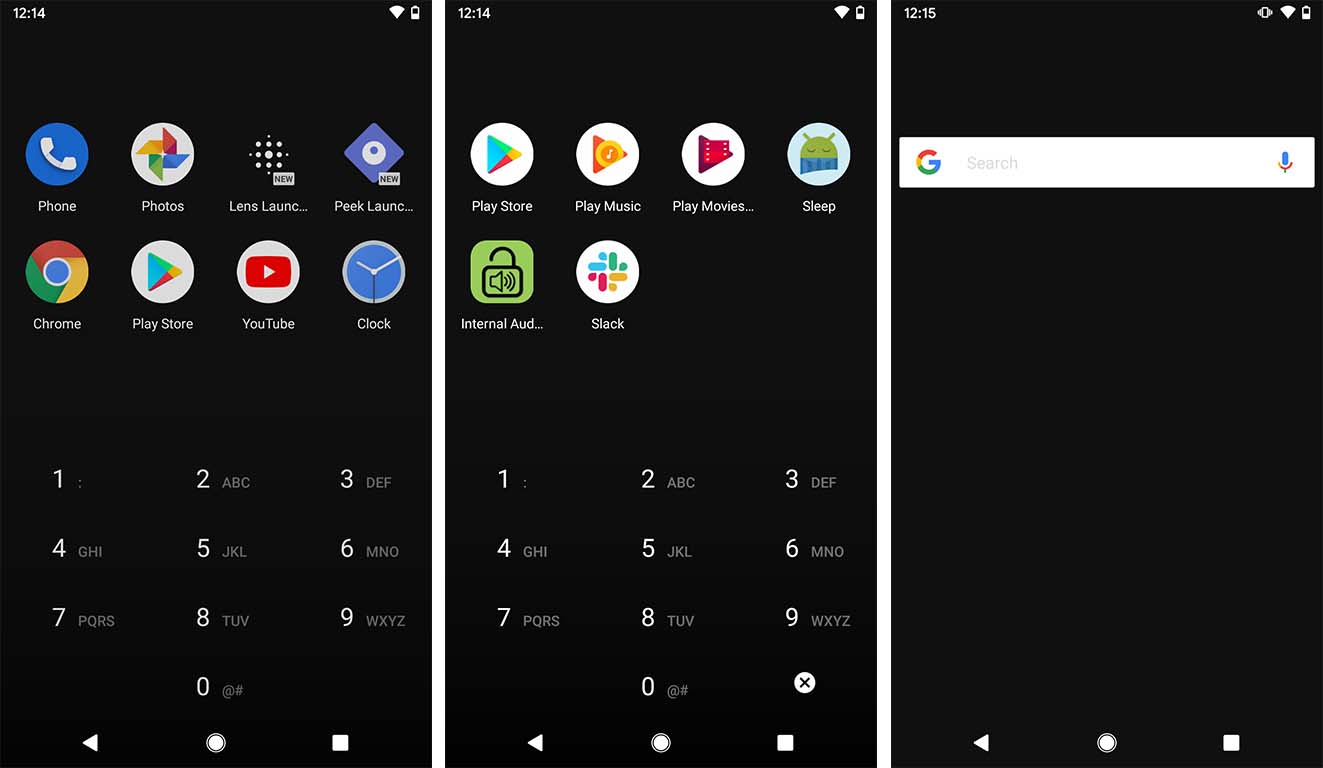 Computer Launcher is the result of a horrible idea. The makers of these launchers tried to make the Windows 10 desktop UI for phones and they have done a really good job at that.

You can see the start menu at the bottom left, where you can find all your apps, it also has notifications, calendar tray at the bottom right. And most importantly, you can even find My PC app which just looks like the app on the windows. Other than that, you can also get a few customizations options which are just basic and also theming options.

There are a good number of themes for this launcher which you can find on the Play Store. It doesn’t offer any functionality than looking like Windows 10. And it is also not so stable, everything kind of looks messy and overloaded. But if you wanted something cool and different, you can be using this for even a few days.

Also, check launcher for Mac OS style which replicates Mac OS. But it is not available on the Play Store, but you can sideload the app online 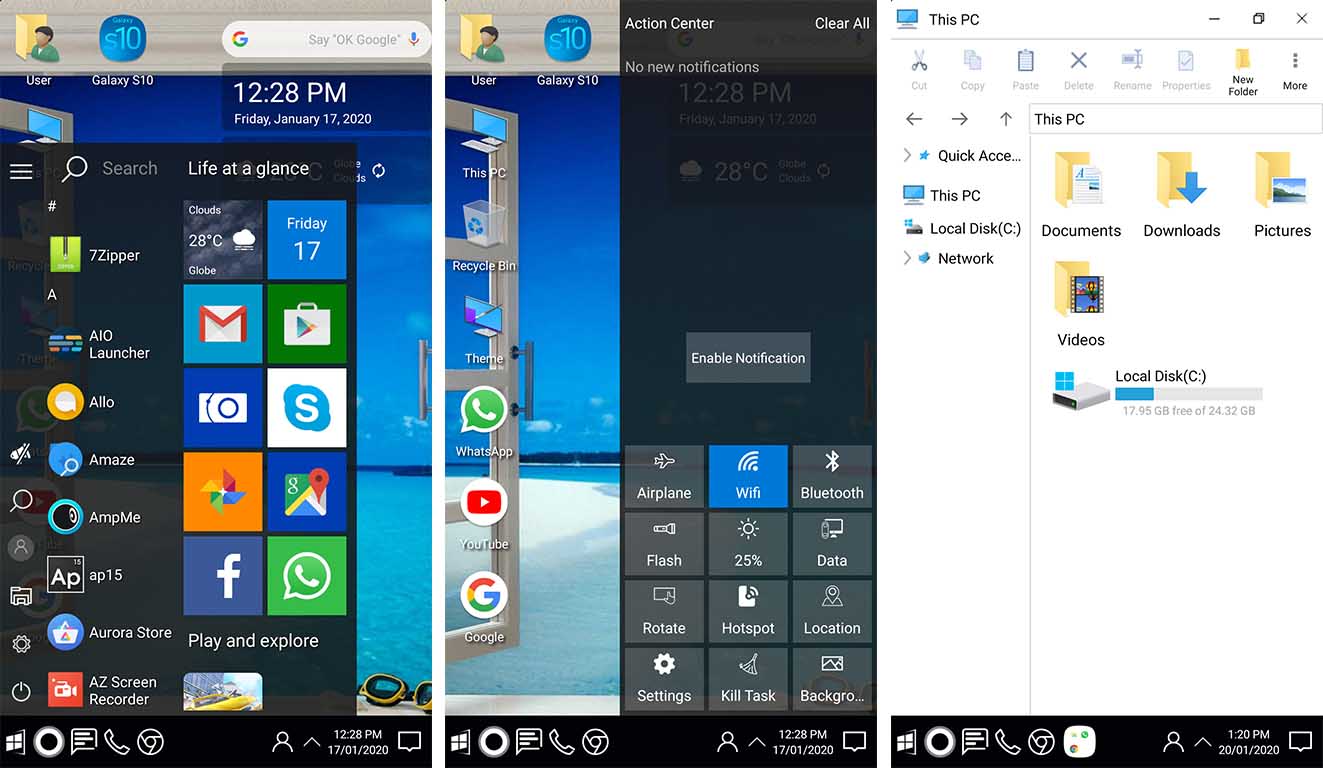 Just like Windows Phones, you can find apps by swiping to the left and even the Launcher settings look like Windows phones Settings. Apps on the home page, folders and every the gallery looks exactly like on Windows by sliding a few recent pictures.

But this app needs a good amount of time to get started for setting everything. And it also takes time for you to get adjusted if you have not used Windows phone before. But once you started using it, it has the potential to be on your phone for even months. 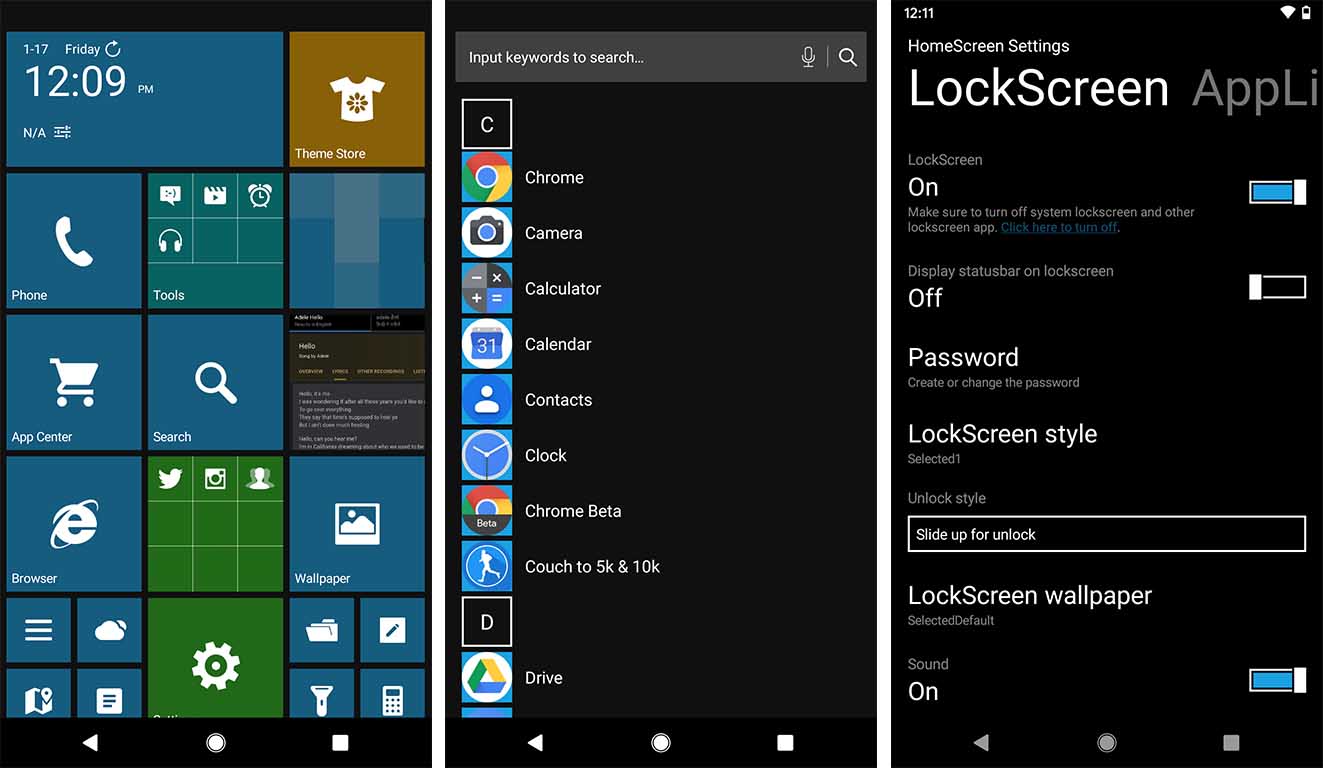 Square Home 3 is another launcher that tried to replicate Windows Phone. But they have added their own skin on top of it and made it even better.

The animations of this launcher are soo good that it’s we can recommend others just for it. Though they are good enough customization options, most people don’t even need them. We can just install and use it right away. 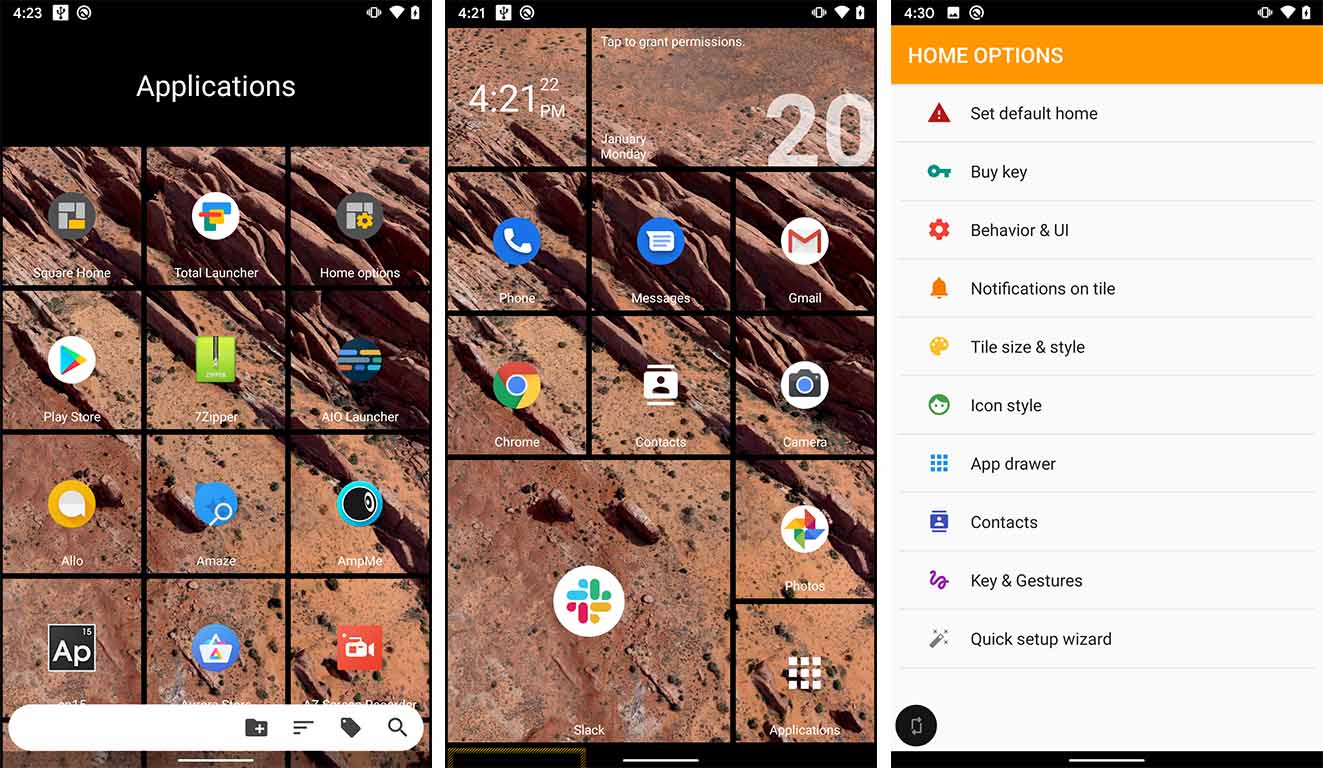 If you are a programmer, this launcher can be your favorite launcher. The UI just looks like a programming software and even every action on it can be done by coding.

This is not an extremely difficult task, you can search the name of the app and click to open apps. Along with it offers few extra features as you can search your files and can also type Call + caller name to place a call. Along with them, you can change the volume controls, toggle a few settings like Wi-Fi, uninstall apps, can use it as a calculator, etc.

You can search for help to know other features it can do. Though you are a programmer, it might be hard to open an app by typing its name every time. But can act like some funny launcher for a few days.

The Smart launcher is a single, plain and reliable launcher that also doesn’t look like a normal launcher at the same time.

This makes your home screen clean by placing only a few favorite apps, can also take advantage of widgets just by swiping to the left and all the apps by swiping to right. And you can also get the latest new like Google Feed by swiping down and search by swiping up.

The only caveat being, you cannot get the notification panel by swiping down and there is no option even available in the settings. 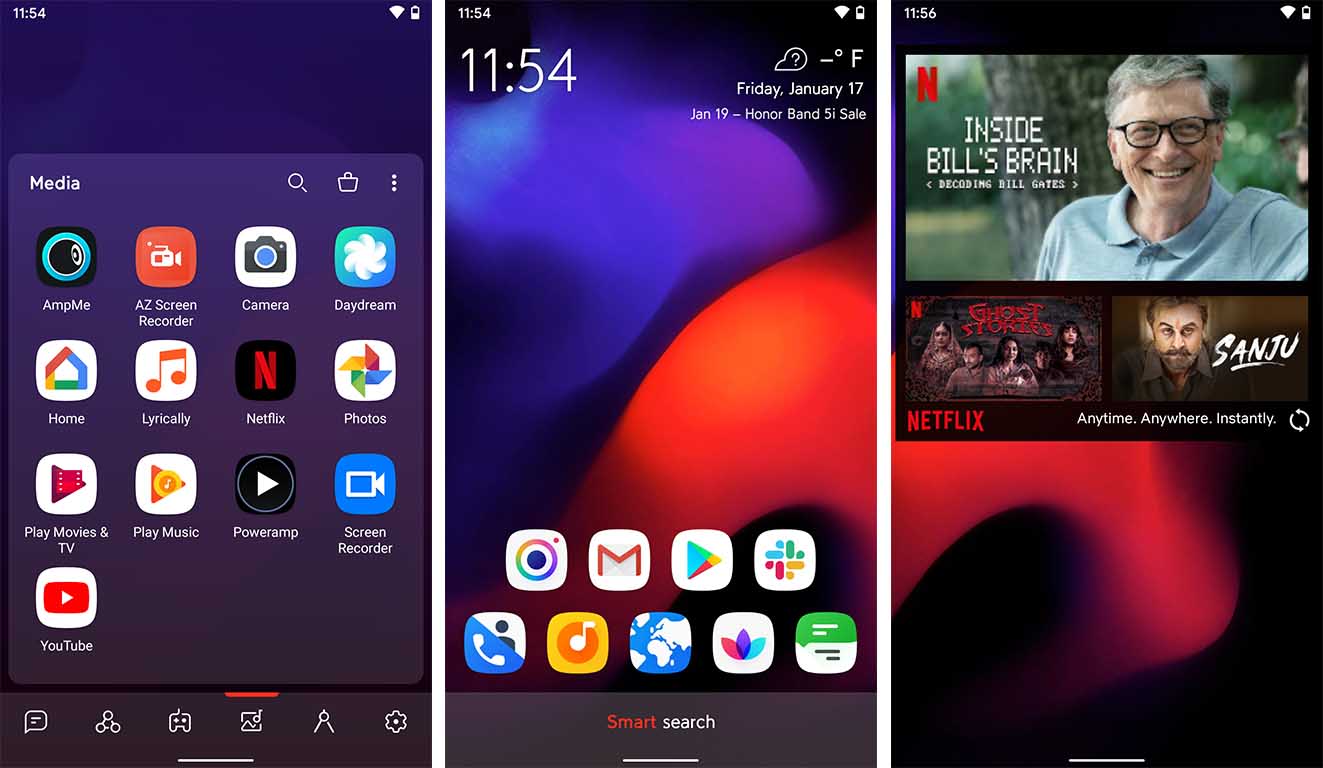