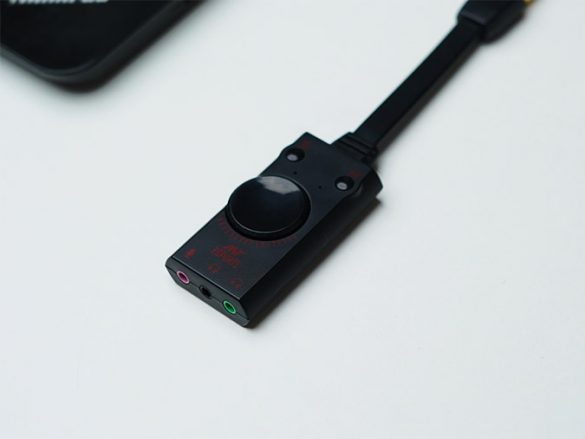 So now that you’ve realized your computer’s onboard soundcard sucks, it’s time to get a new one. External USB sound cards are the only option if you own a laptop. Moreover, in case of a PC, it’s convenient to use an external or USB sound card. This way, you move away from all the internal crosstalk and interference.

Now, everyone has a different purpose to buy a sound card. You might need a sound card just for an extra 3.5mm port or to improve the audio quality of your gaming headphones. Well, whatever the reason, here are some of the best USB sound cards for computers.

Difference Between Sound Card vs DAC vs Amp

Foremost, there’s a lot of confusion between a sound card, DAC, and AMP. Let’s clear that out first. Theoretically, these are different but practically, most sound cards have a DAC included in them. If you spend enough money, you can get a sound card with good-enough DAC/AMP combo like the ones from Creative or Focusrite.

However, the only distinguishing factor between a sound card and a dedicated DAC is the mic port. Sound cards do come with a mic input port that lets you use your headphone and mic with the same sound card. DAC/AMPs, generally, don’t have a mic port but there can be exceptions.

Hence, if your requirement sides with using a mic and headphones, get a sound card. If you want a device-only to drive high-end headphones, a DAC would make more sense.

If you are looking for a simple solution to get an extra 3.5-mm port, the UGreen USB sound card is a great option. It provides a simple USB-to-3.5mm port which doesn’t require any additional driver installation. It just works right out of the box.

The sound card has an all-metal build with a sleek metallic finish. It can sneak in easily to the USB port without blocking other peripheral devices. Talking about the port, the 3.5-mm jack is a TRRS port. So basically, it supports dedicated mic, inline mic, and audio out for headphones via the same 3.5-mm port.

The sound card works with multiple platforms such as macOS, Linux, Windows, PS4 and above, etc. It also integrates a noise isolation IC to help remove hissing from the audio output.

If you are looking for an additional port just to plug in your headphone or mic, UGreen USB sound card is a good option.

Similar to UGreen USB Sound Card, Vention also provides an all-metallic USB sound card. However, unlike UGreen, the Vention sound card provides two 3.5-mm ports. One for headphones and the other for 3.5mm mic input.

Unfortunately, the Vention USB sound card doesn’t support TRRS on the headphone jack. Hence, if you have an headphone with an inline mic, it won’t work with this sound card. It is strictly for a dedicated headphone and microphone.

People who need a soundcard for both mic and headphone via a single USB port.

All-in-one solution for a dedicated headphone and mic

Similar to Vention Sound Card, CreationCable Sound Card is a generic USB-C sound card. Nowadays, Windows laptops and especially MacBooks come with only USB-C ports. Hence, if you are in that shoes, rather than buying a USB-C OTG and a USB soundcard, it’s better to get a USB-C soundcard instead.

The ports are similar to Vention USB soundcard. Both the 3.5-mm ports aren’t TRRS. So, you’d have to use a dedicated headphone and microphone.

Sound Card With Onboard Controls

The black headphone port is TRRS enabled so you can use two 3.5-mm microphones. The secondary mic would require a TRRS cable or adapter.

The USB sound card also features a volume knob to control sound on your headphones. You also get a couple of dedicated mute buttons for headphones and mic. I would prefer this sound card over the generic ones as it provides onboard controls for convenience and really good audio quality for the price.

People who need a budget soundcard for multi-headphone output or multi-mic input for podcast.

Better SoundCard with Onboard controls

Moving on from the budget soundcards, if you spend a bit more around the 50$ mark, you get the Creative Sound BlasterX G3. The BlasterX G3 is designed especially for gamers that lets you drive high-impedance gaming headphones. To be precise, the G3 can power headphones up to 300Ω and provide an audio output/recording resolution of 24-bit 96.0 kHz.

In terms of ports, the G3 comes with three 3.5mm ports for audio-in, audio-out, and an optical port. The G3 has a truck load of onboard controls. You get a couple of volume knobs to control headphone as well as microphone volume. Additionally, you also have a switch to control in-game chat volume and a dedicated mic mute switch.

Moreover, the G3 has a unique trick up it’s sleeve. It’s called the Footstep Enhancer. You can switch to a different EQ by just pressing the big round button on the sound card. The button action is customizable via Creative’s Sound Blaster Connect app. You can choose to switch to your custom EQ settings.

Now, if you bump up the budget to $100, you get to the foot of the premium USB soundcard segment. It starts with Creative’s Sound BlasterX G5. The only reason to buy expensive soundcards is if you really high-impedance headphones or a condenser microphone. Those won’t work with the budget soundcards mentioned above.

The Creative Sound BlasterX supports a speaker output of 5.1 or 7.1 surround sound. However, for that, you would have to use the optical port. Creative does supply an optical cable with the sound card.

You also get additional features with the Creative BlasterX G5. It features a hardware button called “Scout Mode” which can enhance in-game audio like footsteps, reloading sound, weapon switches, etc. Similar to the G3, you can also customize the EQ settings on the G5 with the help of the Sound Blaster Connect app.

People who need a soundcard for gaming or a high-impedance headphone up to 600Ω.

Moving on, if your setup contains a condenser microphone that has to be phantom powered then you’ll have to spend a bit more than $100. The Focusrite Scarlett Solo (3rd gen) is the cheapest offering at $119. It can power Phantom condenser microphones that require a 48V input.

The Scarlett Solo connects to your computer via a USB-C port. You have 2 TRS audio output ports, a headphone jack for audio monitoring, 1 instrument input, and an XLR port for the mic. The maximum playback resolution is 24-bit/192 kHz. The XLR mic port is powered by a pre-amp.

In terms of controls, you get multiple volume knobs. Foremost, it provides separate gain knobs for the mic input and the instrument. You also get a monitor knob to control the monitor volume. You also have an Air button which basically increases the shine on higher frequencies for your mic input. Moreover, Focusrite also provides bundled in DAW software like ProTools First and Ableton Live Lite.

People who need soundcard for solo podcasts or music production. These can drive phantom-power condensor microphone.

Also Read: How to Submit Your Podcast to Amazon Music