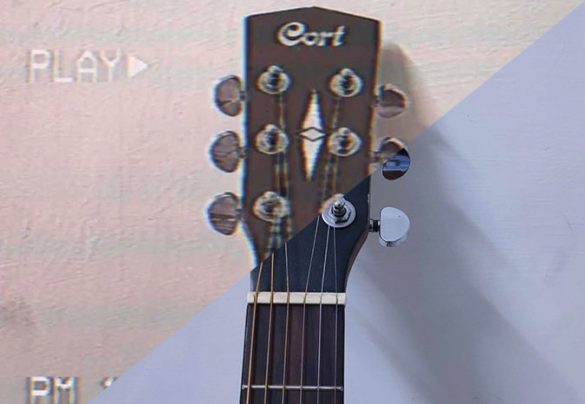 Even though most smartphone camera apps have some kind of basic video filter overlays, they often offer limited options. There are tons of dedicated video filter apps that do a better job. So, if you want to give you footage a unique look, here are the best video filter apps on iOS & Android. Let’s jump right in!

If you’ve not heard of VHS, ask your parents about their marriage footage from the late 90s. Since technology evolves, you wouldn’t find the old look in cameras, but you can always stimulate it in your phone with this app. The app has a vintage UI and lets you stimulate old and glitchy look of  VHS recordings. You get the classic date & time stamp along with an on-screen zoom feature.

The free app is enough for most, however, if you want to spoof the date, have more glitch control, and other similar features. You can upgrade to Pro for $3.

Get VHS Camcoder for ( iOS | Android ) 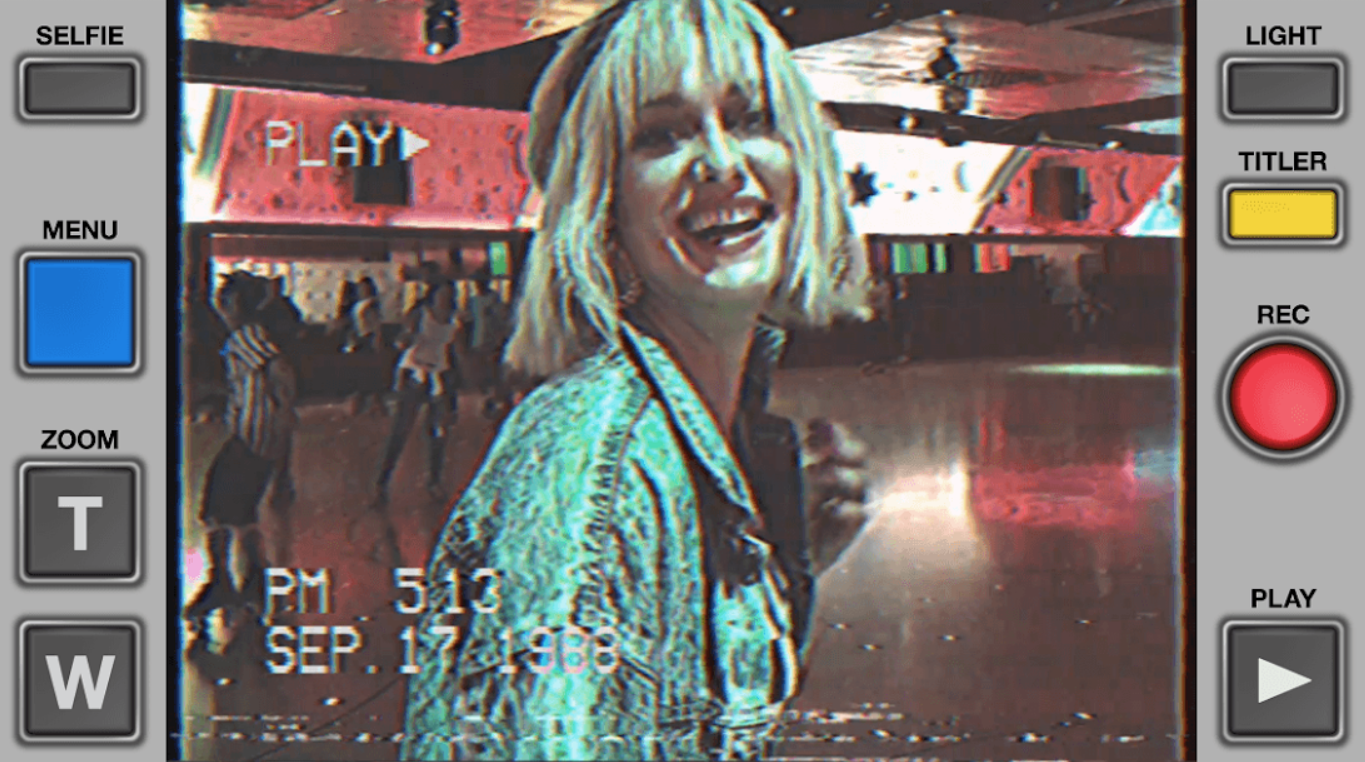 If you’re already got bored of the VHS cam stimulations, the PXL2000 will take you back further in time. The app stimulates the legendary black and white toy camera from the 80s, which is also considered a collector’s item by many. If you’re curious how the app fares in 2020, it’s the same, with very few features but added functionality. For example, you can enable tracking lines, use tilt & shake to mess with the quality and tweak the video resolution as well. Another cool feature is the audio setting, which lets you mimic the low fidelity audio as the original camcorder.

The previous apps were dedicated to shooting for a certain vintage look. However, if you want to try out multiple film video filters, this app is a better choice. Super 16 lets you stimulate your normal footage like 16mm film cameras do. You can not only capture live footage but also use videos from the gallery. There are more than 70 filters, like Kodak Vision, tetrachrome, etc. One of the major features it borrows is the film burn effect, which can be used with a single tap to get a burning effect while you’re recording the video.

The free version of this app has a limit to video filters, however, you can upgrade to the Pro version for $6, which unlocks all filters and film frames.

Get Super 16 on Android

Glitchy and Trippy looking videos are in trend on Instagram, especially with the teens and young adults mainly because of the excessive use in hip-hop music videos. This app lets you create a similar effect to your videos. It has a very unique vertical layering way of using filters. For example, When you capture or import a video. Rather than applying a filter to the entire video, you can tap on a specific filter, to apply it to that duration. This way you can apply multiple filters to the same video.

You can upgrade to the Pro subscription at $3/month to removes the watermark and unlocks all pro filters. Here’s a similar app for iOS. 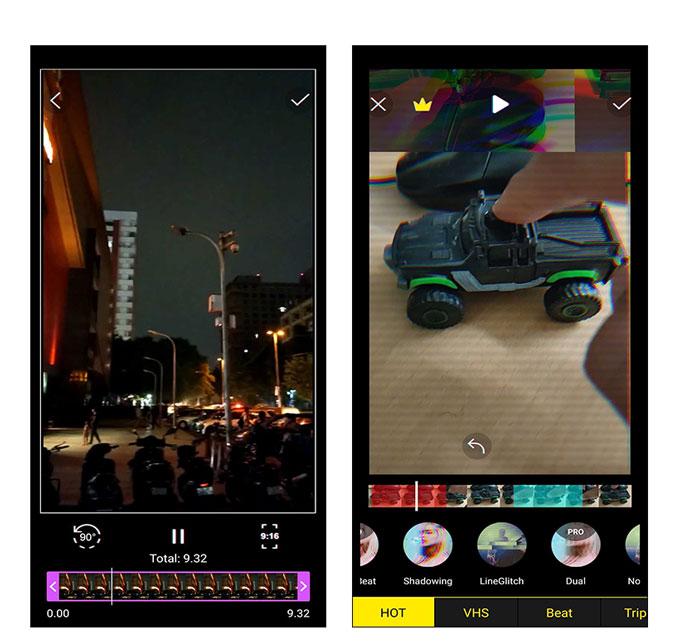 Prequel has a huge database of both filters and frames for your video. It has tons of conventional filters such as music video filters, fashion, reflection, etc. There is a little bit of freedom in terms of playing with the color as you can adjust the light, contrast, temperature, and more such attributes. It’s interesting to see, that the live recording feature just works on iOS, and slow-mo and beauty filter also seems to be missing from Android. So, if you’re using iOS, be ready for a far smoother and richer UI.

The app is free, but you can get  Prequel Gold for $3.5/week along with a 3-day trial which gives you more filters and advance editing tools. 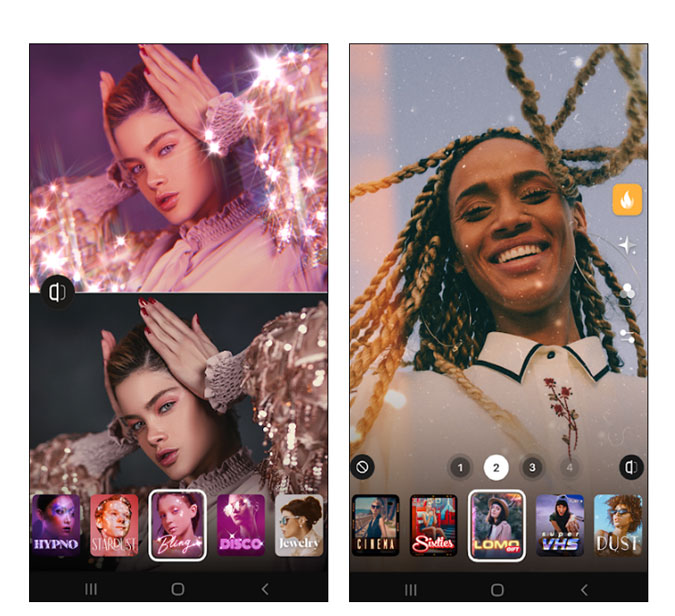 If you absolutely love Prequel and don’t want to experiment with a new app, there is nothing much I can do. But if you’re an Android user, Prequel doesn’t have much to offer in the free version, so a feature-packed obvious choice is this app. It has everything from glitter filters, aesthetic filters, and even a few a unique polaroid style filter. Additionally, you can use other generic video editor features like, trim a video add music, add text, and also change the frame size as well.

The only downside is that it adds a watermark on the videos which can be removed with the Pro version which comes at $2.99/month. This also removes the bottom banner ads in the app.

Get Indie Video Effect for Android 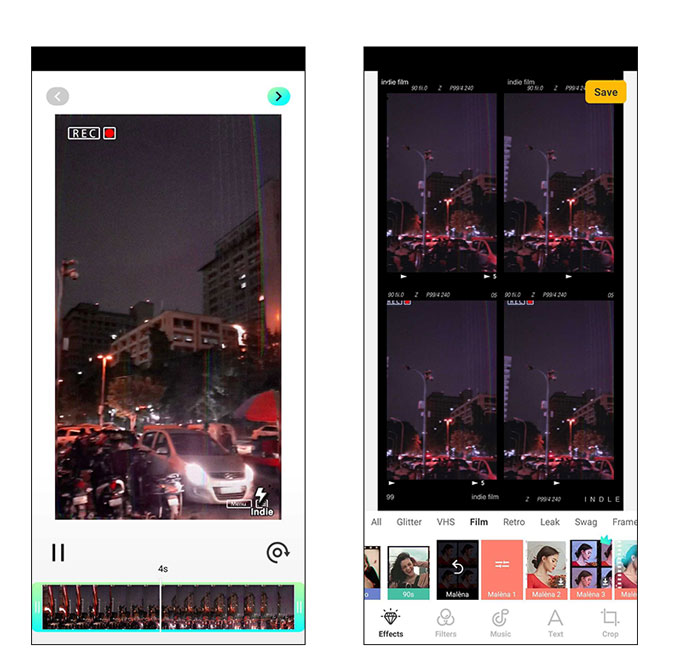 KineMaster is one of the most powerful video editors for Android. And turns out, it also has a huge collection of video filters. Although the app consists of a few free filters like mosaic, spiral, rolling ball, etc. You have an array of more filters in the KineMaster asset library grouped into, artistic, distortion, lens filters, etc. These can be applied to multiple video layers and adjusted accordingly. You can stick to the free version if you’re happy with the free filters. But if you edit a lot, having the entire toolset at your disposal can be very helpful.

You can remove the watermark and access thousands of filters and other assets by subscribing to the Premium version which is priced at $3.99/month

Get KineMaster for ( iOS | Android )

Now that you know some of the best video filter apps that can help you mimic a different look altogether, you can skip those boring Instagram filters which have become more mainstream. If I were to suggest you an app, that’d be VHS camcorder and Super 16, because I’ve used them extensively and I absolutely love them. Since this is an ever-growing list, if you have a filter app that you would like us to add, don’t forget to comment below!