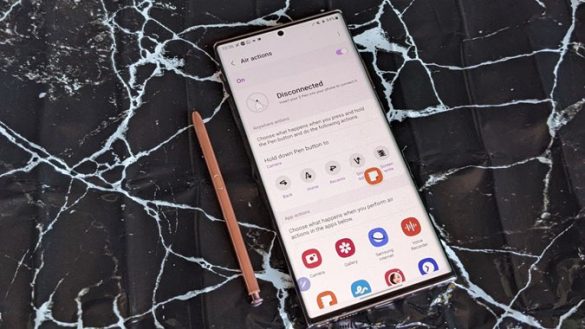 Like all gadgets, Samsung’s S Pen is also prone to issues. For some users, the S Pen doesn’t connect and for others, it doesn’t work in some particular areas on the screen. Even worse, some users see the persistent S Pen disconnected notification. Whatever the issue with your S Pen, this post shall help you. Let’s check various solutions to fix S Pen disconnected, not working, or stuck on connecting issue.

Samsung now offers S Pen for many devices besides the Note series, such as the Galaxy Fold and S series. But all phones aren’t compatible with all kinds of S Pen. So, if you are planning on buying a new S Pen, or if you have already purchased a new one and it doesn’t work with your phone (damn!), you must check whether the S Pen is compatible with your phone or not on Samsung’s S Pen compatibility web page.

Once you are sure that the S Pen is compatible with your phone, you should try the following troubleshooting tips to fix S Pen not working.

The first thing that you must do if S Pen stops working is to simply restart your Samsung Galaxy phone. For that, press and hold the Power button on your phone to open the Power menu. Select Restart from it. Restarting the phone will fix any minor issues or conflicts that could be causing problems with the normal functioning of S Pen.

Note: This method only works for devices with an integrated S Pen.

Some S Pens must be charged, and if the battery runs low, additional features such as Air Actions will cease to function.

To check your S Pen’s battery and charge it, follow these steps:

2. Tap on Air Actions. Here you will see the S Pen’s battery level.

3. If you don’t see the battery percentage, enable the toggle next to Air actions. Once enabled, you might see the S Pen disconnected message.

Wait for a few seconds and the message will disappear. If that doesn’t happen, remove the S Pen if it’s inside your phone and put it back again, or insert the pen in your phone if it’s outside your phone.

4. If the battery is low or nil, it’s better to charge your S Pen. To charge a regular S Pen, insert it into your phone for a while. For tablets with an S Pen, attach the S Pen to the charging area on the tablet. Similarly, use a USB C cable to charge the S Pen Pro.

Accessories like screen protectors or covers especially with magnetic closures or clasps can interfere with your S Pen causing it to disconnect or not work properly. In some cases, the S Pen doesn’t work at some particular spot on the phone. This again happens due to magnetic interference from the phone’s case or cover.

Even though cases/covers made by Samsung also contain magnets, they are designed to be used with your phone. However, the same doesn’t apply to third-party cases or covers. You must remove the problematic accessory and then try using the S Pen.

If you are unable to use S Pen gestures or take pictures using S Pen, then Air actions must have been disabled on your Samsung Galaxy phone. You must enable Air actions by going to Settings > Advanced features > S Pen > Air actions. Enable the toggle next to Off to turn it on.

Yup. You read that right. If your phone keeps showing S Pen disconnected notification and S Pen doesn’t connect to your phone, you must turn off Air actions.

Here are the proper steps to disable Air actions:

1. Turn off Air actions on your phone by going to Settings > Advanced features > S Pen > Air actions. Turn it off on the next screen.

The Air Command app must have the Nearby Devices and Physical activity permission for S Pen to work properly. Follow these steps to check and grant these permissions:

1. Open the Settings app on your phone.

3. Tap on the Sort & Filter icon and enable the toggle next to Show system apps. Hit the OK button.

4. Tap on the Air Command app followed by Permissions.

5. Make sure both Nearby devices and Physical activity show under the Allowed section. If they don’t, tap on them one by one and choose Allow on the next screen.

Next, you must try clearing the cache and data for the Air Command app. Any temporary issue of S Pen could be resolved by this fix.

1. Follow steps 1-3 of the above method to open the Air Command app. Then hit Storage.

The Power saving mode of your phone generally doesn’t affect the functionality of the S Pen provided the “Limit apps and home screen” setting is not turned on. If it’s enabled, S Pen functions may not work properly.

2. Tap on Power saving and turn it off. Then, turn off the toggle next to Limit apps and Home screen.

3. If S Pen still doesn’t work, you must turn off the Power saving mode completely and try using the S Pen.

Pro Tip: Turn off Airplane mode to see if that fixes the issue with S Pen.

If you are getting the“Couldn’t connect to your S Pen” error, try turning off Bluetooth on your phone as other Bluetooth devices could interfere while connecting to S Pen. To turn off Bluetooth, go to Settings > Connections. Turn off the toggle next to Bluetooth.

Once Bluetooth is off, reconnect the S Pen. Then, turn on Bluetooth again.

If you need to press your S Pen with a lot of pressure or your phone doesn’t recognize the S Pen touches easily, then the problem is with the S Pen tip. Try removing the tip and inserting it back again. If that doesn’t help, you must try changing the S Pen’s tip. Check your phone’s box for extra tips. If the phone didn’t include tips, you will have to purchase them separately,

2. Hit the three-dot icon at the top and select Reset S Pen. Your S Pen will reset. If you don’t see the Reset S Pen option, enable Air actions.

15. Try on a Different Device

I have kept this solution to the end because it’s a bit risky and you must try it only when the above methods fail to fix S Pen not working or connecting issue.

Basically, you must heat your S Pen slightly. I know. I know. You must be thinking what’s she saying. But this YouTube video is loaded with positive reactions.

Make Use of S Pen

Once your S Pen starts working again, learn how to use S Pen’s Smart Select feature like a pro. You should also check out the best apps and games for S Pen. Also, know how to find a lost S Pen.