Home » Android » How to Create a Whatsapp Account Without Phone Number

How to Create a Whatsapp Account Without Phone Number 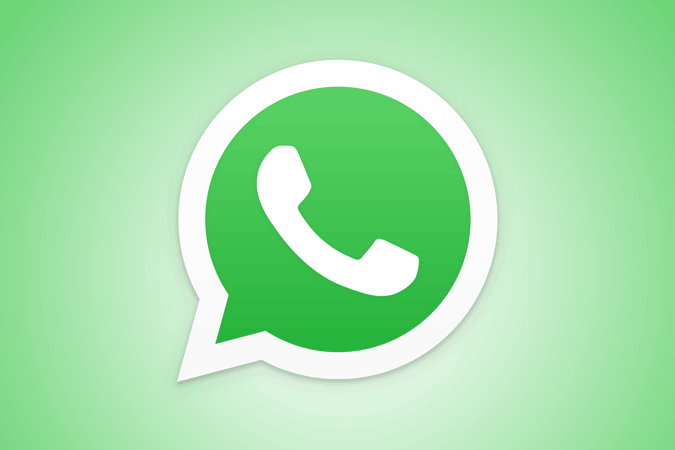 WhatsApp is a popular messaging app for Android and iOS, that lets you send messages and make calls over the Internet. However, you need a phone number to signup for a new WhatsApp account. Therefore, staying anonymous on WhatsApp isn’t an option, everyone can view your phone number and there isn’t a way to hide it. Thankfully, there is a way to create a WhatsApp account without using your real phone number, so you can join any group, or give your WhatsApp number to anyone without worrying about your number leaking to the public.

While it’s easy to create an account in WhatsApp, the important part is the verification process. WhatsApp sends you a verification code by SMS to your phone number. You need to input that code into the app in order to complete your account set up. But we can bypass this verification by using a temporary phone number. You can create temporary phone numbers with apps like Text Now and Telos. While Text Now the app is great, it is only available in a few countries like the US, Canada, Kuwait, Singapore, etc. Where as Telos works in many more countries including the Philippines, Nepal, India, Pakistan, etc.

To generate an alternative phone number, you need to install the Telos app (Android/iOS). Even Telos isn’t available in all the countries, if the app isn’t visible to you in Play Store or the App Store, it most probably doesn’t work in your country. Anyhow, it doesn’t matter on which device you install the app, all we need is to generate the phone number and get the verification code.

Now, launch the Telos app and we need to create an account in order to use the app. You can use your e-mail ID or Facebook account to create the account if you do not want to use the phone number. Once done, you can grant the app access to make and manage phone calls. 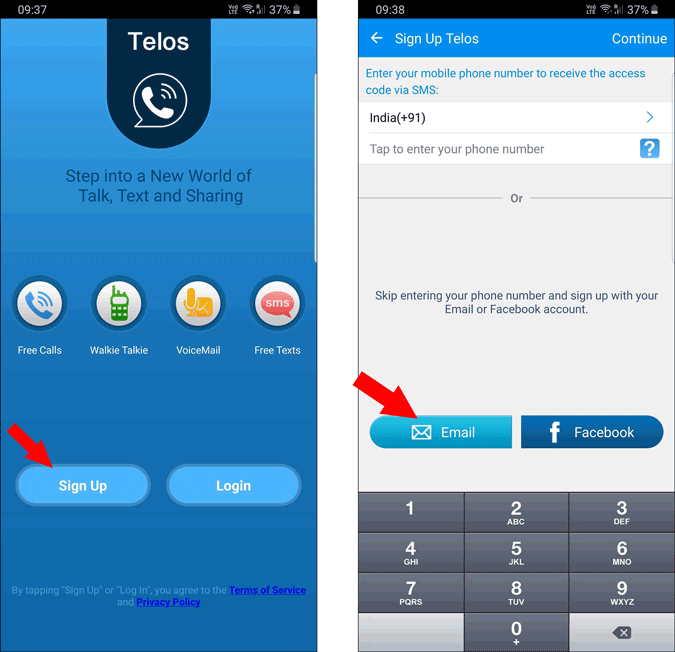 Once done, creating an account, you need to select the country that you would like the number from. It doesn’t matter which country you pick. Now select the area code in the respected country, as I selected the US, I have entered the US area code. Now hit search. 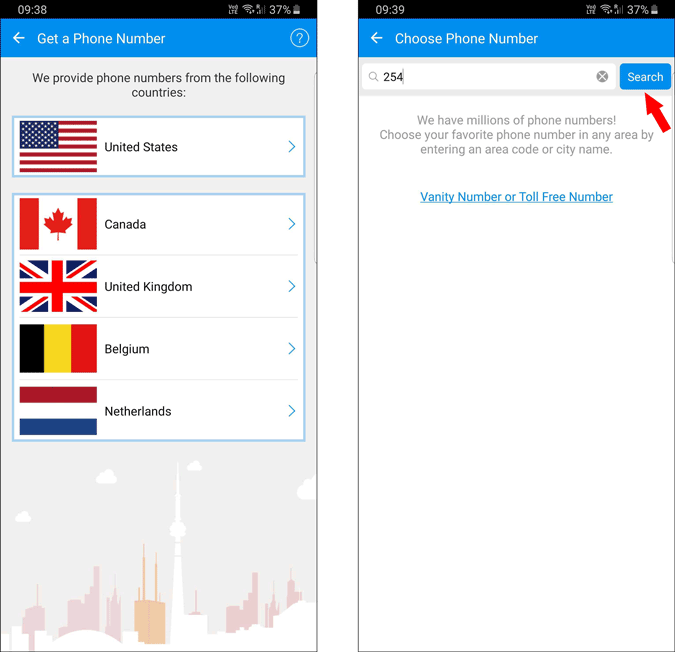 It is time to pick your number! Telos will generate a list of numbers to choose from. Select the one you like, then go ahead and hit ‘Continue’. Telos is a monthly membership app and you get a 3day free trial. Anyhow, you don’t need to continue the membership just to use Whatsapp. You can click on the Free-trail for three days and complete the payment process to create a phone number. You will need a valid debit card saved in your Google Play Store Payment options. 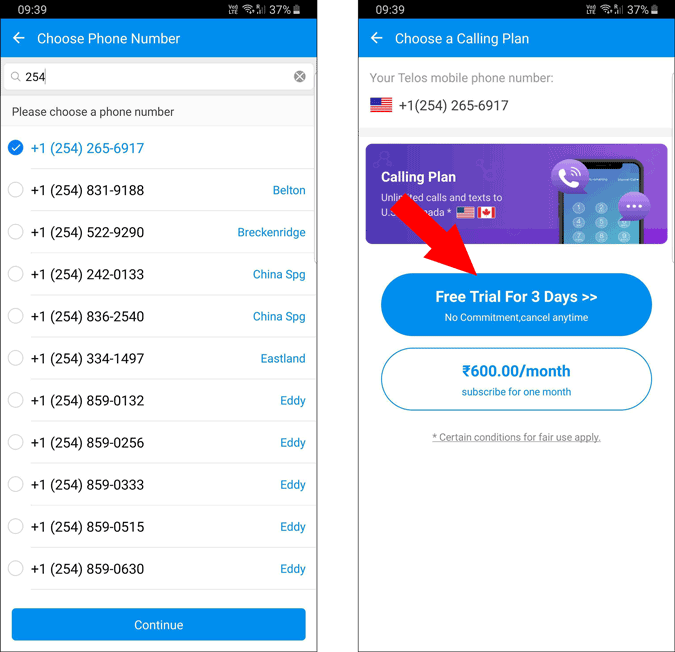 You won’t get charged if you cancel the subscription before the trial period ends. Anyhow, you don’t need to stay subscribed to use WhatsApp with that number. Once the verification is completed, you can end your subscription, so this is completely a free option.

Step 3: Set up WhatsApp with that Number

Install the WhatsApp app (Android | iOS) on the device. Go ahead and launch the app, and tap ‘Agree and Continue’. Now change the country to match the country you have selected in the Telos app. Then input the new alternative number into WhatsApp. Hit ‘Next’ at the bottom once you are done. 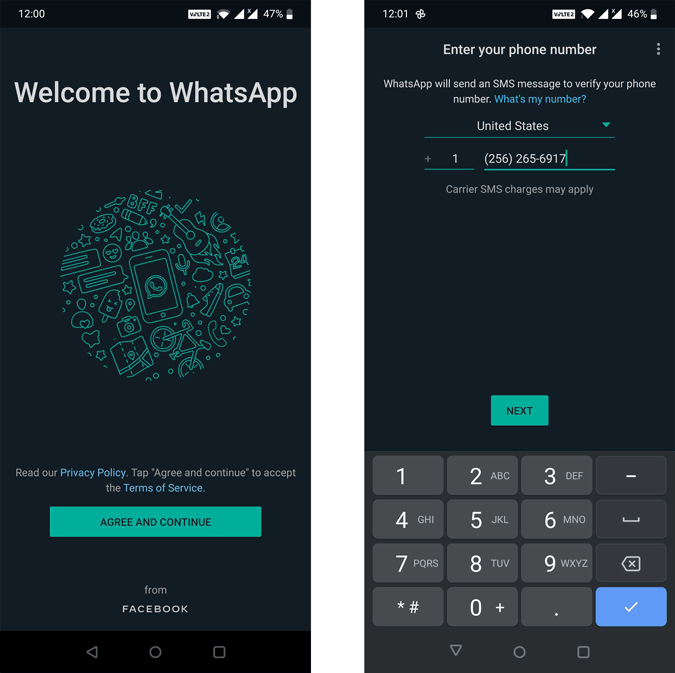 That’s it, you have successfully created a WhatsApp account without using your phone number. 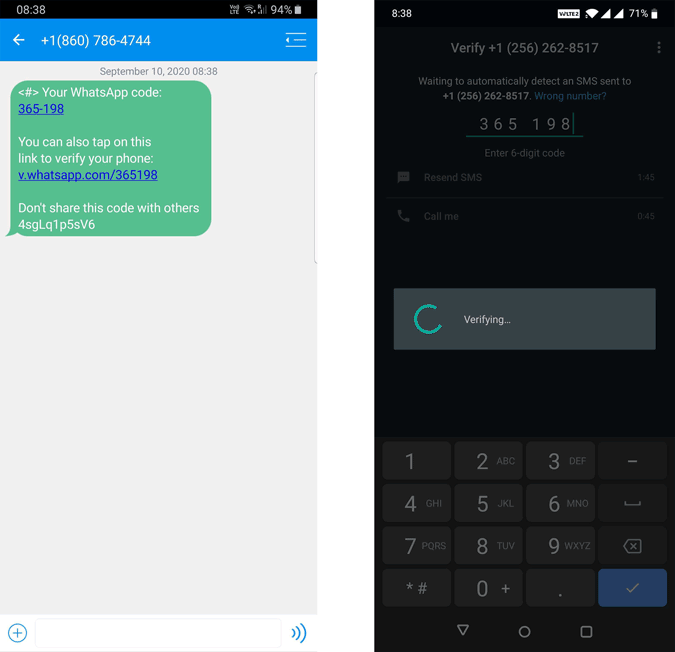 Now you can cancel your subscription in the Telos app and WhatsApp will work as usual. You can even make phone calls and video calls from WhatsApp even after canceling. This is because WhatsApp uses the Internet to place calls and not mobile networks.

Weird enough, canceling the subscription on the Telos app is a bit buggy. But as we have signed-in with the help of email, you can unsubscribe from here if you are using Gmail.

You can add contacts to your phone just like before and Whatsapp will read that contacts data just like before. Anyhow, to send regular SMS from the number you have created, you need to continue the membership and you also need to grant access to contacts for the Telos app.