12+ Exciting Things You Can Do With the Dynamic Island 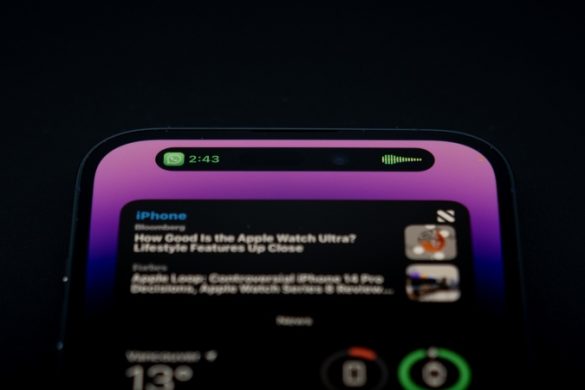 Welcome to the Dynamic Island! When Apple launched their new iPhone 14 series, they also introduced a punch hole to their Pro models. It seemed like a slight touch at first, but there is much more to it than the punch hole. The dynamic island on Apple’s new iPhone 14 Pro and 14 Pro Max models adapts to different apps and activities and shows relevant information on top of your screen. It’s like having a small indicator on the top part of the screen which can also expand and multi-task when needed.

Technically, it’s a punch hole present on the latest model of Apple’s iPhone 14 Pro and 14 Pro Max. But there’s a catch, cause it’s not just a normal punch hole on the display. It’s more like an interactive, floating space on top of your screen, which helps you glance at some quick information easily rather than looking at multiple places on the screen. The Dynamic Island adapts to various apps and Apple says it will also be able to show live activities like scores, cab ETA, and much more soon. Let’s explore some of the best uses of Dynamic Island on your new iPhone 14 Pro and 14 Pro Max.

If you’re one of those people who use their iPhone for navigation and play music at the same time, this would be helpful to you. Just start playing music and send it to Dynamic Island by swiping up on the screen. After that, open any navigation app like Apple Maps or Google Maps. Once the navigation starts, you’ll find it easier to control the music by expanding Dynamic Island by long pressing on it.

Pro Tip: You can even scrub through the music by dragging your finger across the progress bar.

2. Message and Navigation at the Same Time

You can also now chat and use the navigation at the same time. Just start navigation on any app like Apple Maps or Google Maps and minimize it to the Dynamic Island by swiping up on your screen. Then open the messaging app and now you can continue multi-tasking in a fun way. And when you reach the destination, simply end the navigation by long pressing on the Island and tapping the End button without having to leave the conversation.

If you’re a student who usually forgets their iPad or prefers their iPhone for taking notes, then this is going to be a life-saving hack for you. Just start recording in Voice Memos and send it to Dynamic Island by swiping up on the screen. After that just open the Notes app and start jotting down. And when you’re done recording your lectures, long press the Island to expand it and press the stop button.

This is the most basic yet useful feature of Dynamic Island. Whenever you’re on a call and you swipe up to minimize it, it will go directly to Dynamic Island and sit there for the entire duration of the call. You can long press on the Island and put the call on speakers, plus you can also end the call from there without leaving the app you were fiddling with.

Whenever you put AirPods in your ear or back in the case, Dynamic Island will act as a battery indicator for you. You can also long-press the Island to see detailed information.

Note: Dynamic Island is a new feature, so it hasn’t been fully optimized with the system yet. You might not see the AirPods indicator sometimes on the Island. It will get better with future updates.

Just like a normal phone call, FaceTime is more convenient now. Whenever you’re on a FaceTime call and you minimize it, it will go directly to the Island. And from there, you can do multiple things by long pressing on the Island. Examples include muting the mic, changing the output audio source, and turning off the camera. The best part is that you can also share your screen and start SharePlay from the expanded Island itself.

Gone are the days of AirDrop-ing someone a file and waiting till its completion. Now with the iPhone 14 Pro and 14 Pro Max, you can literally visualize the progress of the file being AirDropped. Whether you’re sending or receiving a file, you can check the progress on Dynamic Island. Simply tap on the Island to expand and from there, you can also cancel the transfer as per your wish.

Twitter Spaces is a fun and new way of interacting live on Twitter. And the best part is that it is well supported by Dynamic Island. You can minimize Twitter while listening to a Space, and it will sit on top of the Island displaying a cute animated waveform whenever someone speaks. You can also long-press the Island to expand it, but since it’s a live event, the only option you’ll get is to change the output audio source. Unfortunately, if you want to leave the Space you’re listening to, you need to open Twitter and do it manually.

If you’re an avid Reddit user, you must have heard about Apollo which is a famous Reddit client. After the launch of Dynamic Island, Apollo introduced multiple animated pets which sit and walk on the Island while browsing through Reddit. You can enable this in Apollo by going to Settings > General > Pixel Pals, and from there enable the Dynamic Island Zoo.

Podcast listeners are gonna love this as much as I do. Simply start a podcast on any app like Spotify, and throw it on the Island by swiping up on the screen. After that, you can control the playback and audio output source by expanding it when you long press on the Island.

If you have an active YouTube premium subscription then Dynamic Island will turn out quite useful to you. Whenever you are playing a video on YouTube and you swipe up to go to the home screen, it will go to Dynamic Island and continue playing the video from there. You can long press on the Island to expand it and control the playback.

12. Some Other Dynamic Indicators

There are many other important indicators that sit right on top of Dynamic Island and display useful information. For example, charging indicator, hotspot, silent-ring indicator, Face-ID, countdown timer, and much more.

Note: Whenever you turn on Hotspot and no device is connected it won’t appear on the Dynamic Island, if a device gets connected then it will start showing the Hotspot indicator.

Dynamic Island is a way of Apple telling other phone manufacturers that you can cut some real estate from the screen and still get applauded if done in the right way. Its a brilliant way of using the camera notch to adapt to different apps and core system functions. Dynamic Island is for sure one of the unique yet functional features Apple has released. But, before coming to a verdict on whether it’s a gimmick or not, you should try giving the Island some time to play with. Maybe you’ll love it, maybe you’ll adapt to it, just like Dynamic Island itself.

We have been busy covering iOS 16 here. Want to find out more about iOS 16? You know what to do.