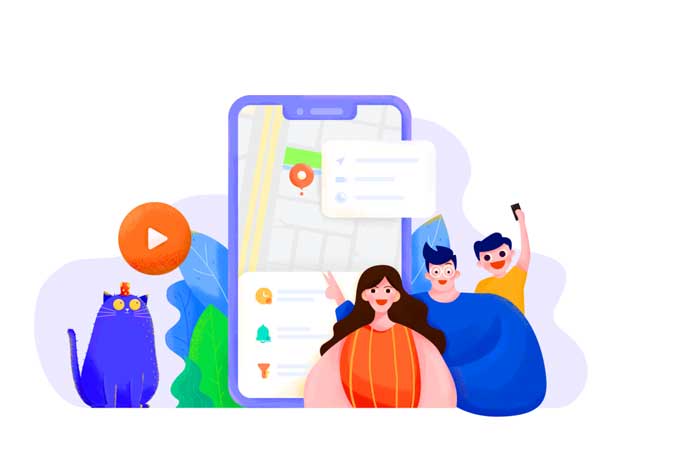 Famisafe is a parental control app that doesn’t rely on just blocking some websites on your kid’s device. It ensures that your child can browse the internet safely without you hovering over them constantly. You can monitor your child’s device’s Screen Time, app and internet usage, location, etc, all from your smartphone. The app works with both Android and iOS.

To get started, you install the app on your and your child’s smartphone, then create an account, and assign a role to each device. The kids’ device would then act according to the rules you set. This is achieved by granting Famisafe permissions to control your child’s phone. On Android, it is done by enabling Device Administrator permissions and on iOS by installing the Famisafe MDM profile.

Famisafe has 7 key features that make it a complete package that ensures your child’s safety. While some of the features are natively included in iOS such as Screen Time, it doesn’t tell you what your kids are actually doing in those apps. For example, you would be able to see your child spent 5 hours on YouTube on Screen Time but you would have to manually access your child’s phone. I’d be taking a look at all the features, how well it works with iOS and Android.

While Screen Time is built natively into the iOS and you have Digital Wellbeing on Android, you need to access your kid’s smartphone to do that. With Famisafe, you can access that data from your device and see how time they spend watching YouTube and playing games. Not just that, you can block an app with a simple swipe if they spend too much time on a single app. 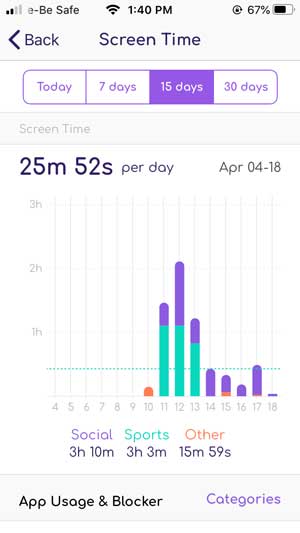 To help visualize things in an easy way, Screen Time is plotted on a bar graph with categories represented with different color and you can view the data for the past 30 days.

Activity Report is a Famisafe exclusive feature that allows you to see everything that happened on your child’s screen.

For example, it gives you a timeline of which apps were opened on your kid’s phone, how much time they spent on that app and then moved to which app. The report is stored separately and you can simply tap the date to retrieve the information. 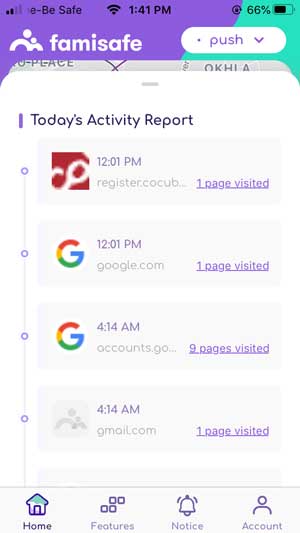 The internet is where things get tricky. As a child, they may unknowingly click on an unsuspecting web link and find inappropriate content. You can actively set filters that would prevent them from stumbling on those websites even if they try. 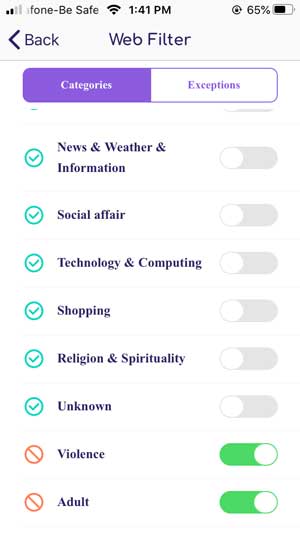 The app has predefined categories such as violence, Drugs, adult content, etc. You can simply enable that category and that category would be blocked.  If there are some exceptions to this filter, you can add those manually as well. It’s really simple.

Famisafe allows you to track the exact location of your child’s smartphone right from the app. What’s even more impressive is that you can set up geofences so that the app would alert you if they move out of the designated area. For example, if you sent them for a sleepover to a friend’s house, you can set up a geofence for that location. And if they go outside the area, you’d be alerted. 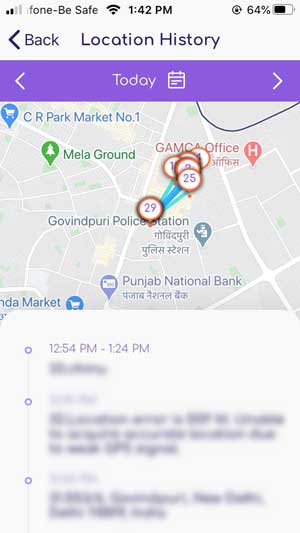 Messaging apps are really popular among young children and can be a hotspot for bullying. Famisafe can detect certain keywords such as abusive language, curse words, inappropriate words, etc. You would have to manually feed the words to the app. Once set up, you would receive a notification every time the keyword is used in a message. It would also let you know who said it. 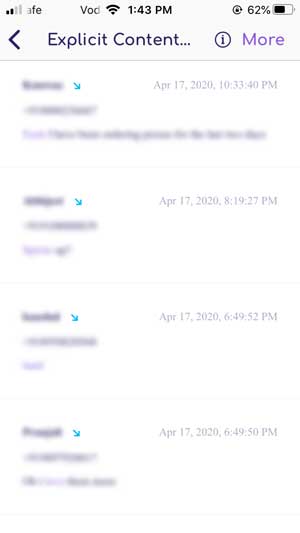 As Android has fewer restrictions than iOS, all of the above features work as intended but not on iOS. For example, if your kid uses an iPhone or an iPad the following services don’t work at all due to Apple’s strict data policy.

Web filtering on iOS only works with Safari, if your child tries to open a blocked website on Chrome, it would open regardless of your restrictions.

Suspicious texts don’t work on iOS so if your kid is messaging WhatsApp, iMessage on iPad, or iPhone then Famisafe would not be able to detect any keywords. However, it does detect on YouTube.

As Screen Time is built into iOS directly, the data is not shared with any third-party app so you won’t be able to access your child’s app activity from your own smartphone. Also, Activity tracking doesn’t work with iOS so you won’t get an in-depth insight on your child’s activities on an iPhone.

Famisafe is a comprehensive tool built for parents who wish to keep track of their child on the internet without interfering. Features such as Screen Time, Web filter, geofencing, etc are really effective. Famisafe makes sense if your kid is between 4 and 13 starting to get on the internet. However, I should point out that if your child uses an iPad or an iPhone then there are some limitations and you won’t be able to get all the features working on it.

Famisafe is a paid subscription app that has three tiers; up to 5 devices, up to 10 devices, and up to 30 devices. The plan starts at $9.99/mo for up to five devices and it gets cheaper as you scale up and add more devices. If you wish to try the app first, then Famisafe has a three-day free trial as well.

Famisafe Review: Should You get it?

Famisafe works well on Android devices and still manages to include most features on iOS devices as well. I would recommend getting a Famisafe subscription if you wish to protect your child on the internet. That being said, I would  recommend getting Famisafe for Android over iPhone or an iPad as you don’t get most of the features but you still have to pay the same amount regardless of the number of features missing on the iOS app. What do you think? Does Famisafe makes sense for you and your child? Let me know in the comments below or reach out to me on Twitter.