So, you sit down for movie night, open Netflix and start looking for something to watch. And you keep looking. Scrolling down and down, until you reach the point of not wanting to watch anything anymore.

Netflix has become the modern-day version of opening the fridge for no reason. And while one reason for it would be having so much to choose from. I’ll also blame netflix, for not making it easy to find stuff to watch.

Read: How To Watch Netflix Together With Remote Friend (Android | iOS)

According to a recent report from Hub Entertainment Research, viewers aren’t looking to Netflix for movies. They go to Amazon Prime for movies and Hulu for TV Shows. And it make sense, lately Netlix seems to focus on making more and more Netflix original show rather the licensing popular movies and shows, that it used have when it first started.

Also, Netflix’s homepage page recommendation is driven by an algorithm that serves you suggestions based on your viewing history, meaning, there is a good chance of missing those few good titles that Netflix has.

The site does 2 thing really well.

1. It makes it easier to find new TV shows and films on Netflix

You can narrow down your search for movies and TV shows on Netflix by Genre, IMDb rating, and release year. For example, these days, I don’t get much time to binge watch Netflix, like I used to when I was in college. So, whenever I sit of a movie night, I use Flixable to sought movies that released after 2010 with 7+ IMDB rating.

2. It keeps a detailed log of what’s added and removed from Netflix

Clicking on ‘Leaving’ option under the top menu, it shows titles that will soon leave the platform, and a ‘popular’ section that reveals the most-watched shows and movies of the day, week and month. 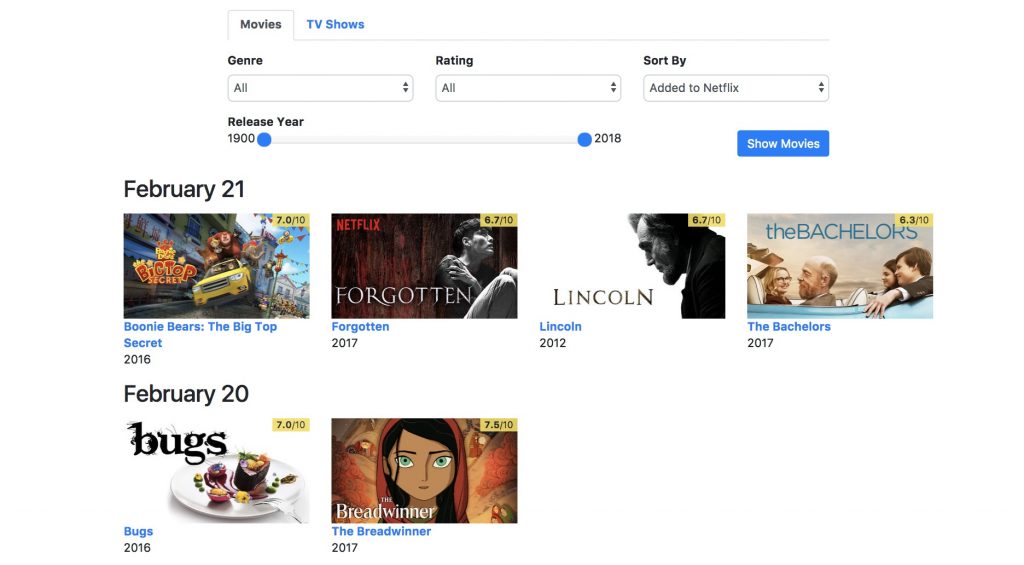 Overall, the entire site is clean, simple and easy to use. It will also make you realize just how cluttered the Netflix interface has become. Best of all, it adapts perfectly to a mobile format for viewing from your phone.