Home » Internet » How to Find and Use Draft Reels on Instagram

How to Find and Use Draft Reels on Instagram 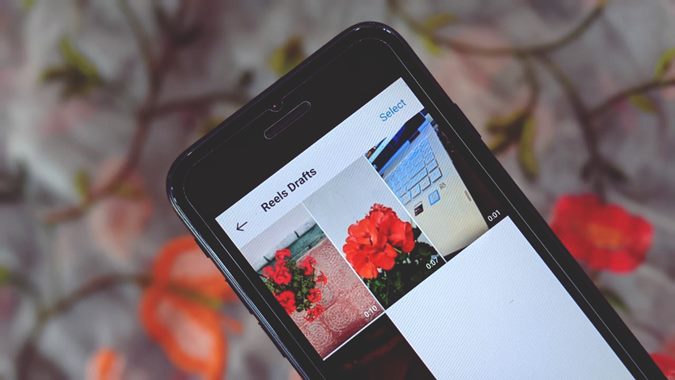 Instagram offers the draft feature that comes quite handy while creating Reels. You can save multiple video clips in drafts and create a new Reel out of any draft. But where are Instagram Reel drafts saved and how to use them to create a new Reel? Let’s check how to use draft Reels on Instagram. You will get to know how to create, find, edit, delete, download, and share a Reel draft.

Note: The Reel drafts are not synced across devices. So if you are logged into your Instagram account from multiple devices, you will see different Reel drafts on each phone based on where they were created.

How to Create a Draft Reel

There are two ways to create a draft Reel. In the first method, when you have captured a clip and you are on the screen where you can record more clips, hit the cross (X) icon at the top. Choose Save as draft from the pop-up menu.

Alternatively, go to the final screen i.e., sharing screen where you can add a caption and choose Reel thumbnail. Here you need to tap on Save as draft at the bottom.

How to Find and Check Draft Reels

Now we come to the important question – how to see and recover Instagram Reel drafts. For that too, we have two different methods.

In the second method, open your Instagram profile screen and tap on the Reels icon. Tap on the first box that says Drafts. It contains all your draft videos.

Once you get to draft Reels, you can perform various actions on them as described below.

To edit the draft Reel before posting, go to the Reel Drafts folder using one of the above-mentioned methods. Tap on the Reel that you want to edit. Hit the Edit icon at the top.

You will be taken to the editing screen where you can add music, text, own audio, and stickers to your Reel. Use the required option to edit and customize your Reel.

How to Add Music or Audio to Reel Drafts

Open the draft Reel in the edit mode as shown above. On the editing screen, tap on the Music icon. Then tap on the Add button and choose a song of your choice.

To add custom audio, tap on the Microphone icon and record the audio.

Visit the Instagram Reel Drafts folder and tap on the Reel that you want to publish. You will be taken to the share screen. Tap on Share at the bottom to post the draft Reel to your profile.

Tip: Tap on Edit if you want to preview or edit your Reel.

How to Save Draft Reels in Gallery or Camera

To download a draft Reel from Instagram without posting, go to the Drafts folder and tap on the Reel to open it. You will reach the Share screen. Tap on Edit. Now tap on the Download icon at the top.

Tip: In case this method doesn’t work, share the Reel to your story and hit the download button on the story to download the Reel. However, instead of sharing it with everyone on your story, create a close friends list, add a person, and share it.

How to Trim a Draft Reel

Firstly, download the Reel draft video to your phone’s gallery as shown above. Then upload it as a new clip from Gallery in the Reel, just as you would add a photo to Instagram Reels. Once added, go back to the clip editing screen by tapping on the small arrow at the bottom. Hit the scissor icon to enter the trim mode.

Use the left and right edges of the slider to trim the video. The left side represents the starting point while the right is the end of the video.

Alternatively, you will have to download the Reel draft and use a third-party Reel editing app such as VN to trim the video.

How to Add Another Video to Draft Reel Video

Unfortunately, you cannot merge a video clip with your draft Reels. You will have to download the draft Reel first, create a new Reel, and add multiple video clips to it including the downloaded draft Reel.

Why do Draft Reels Disappear

Users often complain of Reel drafts disappearing from their profile. That happens when you log out from your account or clear data on Android phone. Also, as mentioned earlier, you will see the drafts created on that device only and not from other devices. It’s always a good idea to download the Reel video clip to your mobile instead of saving it as a draft.

The draft is a great feature to save Reels on Instagram for future use. It’s quite easy to find the draft Reels and use them. When you are ready to create the final Reel, you can also add disappearing text to the video.