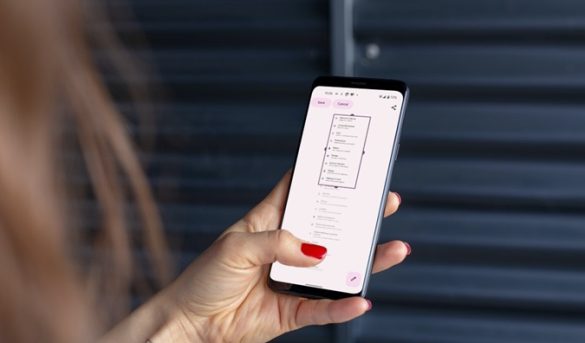 To check your Android version, go to Settings > About. Look for the version number.

Next, restart your Android phone. Sometimes, new features don’t show up immediately after updating the phone. A restart should fix it.

3. Use the Right Method

Take a screenshot and you’ll notice a new Capture More button next to the Share and Edit icons. Tap on it to select the area you want to capture. Drag the edges to include the necessary area, then tap the Save button.

In my opinion, the Capture more button is missing on the Recent apps screen because it just shows a preview of the screen. It would be difficult to take scrolling screenshots from such a view. Having said that, it’s not impossible. We might see Google add the functionality in future updates. But it’s not available currently.

For that, launch the Chrome app and open the web page. Tap on the three-dot icon at the top followed by Share.

Tap on Long screenshot. Drag the edges of the selection box to include the required area and tap on the checkmark icon to save the scrolling screenshot.

In case you don’t find the Long screenshot option, don’t worry. The feature is currently being rolled out and may take some time to appear in the menu. If you are eager to check it out, you may enable its flag.

1. Open Chrome and type chrome://flags in the address bar.

2. You will see a search bar on the page. Type long screenshot in the search bar.

3. The Chrome Share Long Screenshots flag will appear. Tap on the Default drop-down box and choose Enable from the menu. Relaunch Chrome.

4. Open the webpage where you want to take a scrolling screenshot. Tap on the three-dot icon and select Share. Now you will see the Long screenshot option. Tap on it and capture the required area.

Android 12 doesn’t offer a one-tap feature to take screenshots of the full page. You will need to manually select the entire page to take its screenshot.

Where Are Long Screenshots Saved

The scrolling screenshots in Android 12 are saved in the regular Screenshots folder of your device. You can view them using any Gallery app.

How to Edit Scrolling Screenshots