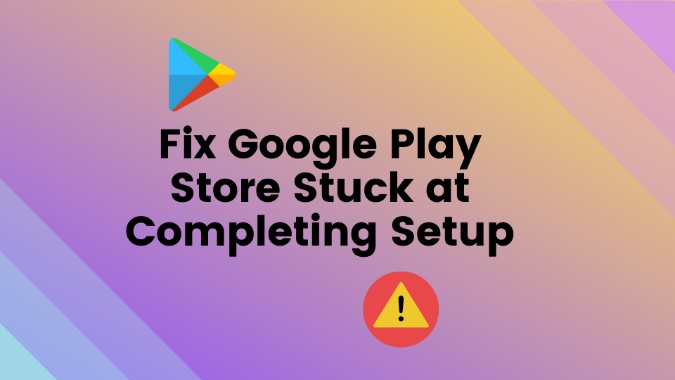 The issue is most apparent when you try to set up an Android phone for the first time. The default Google apps come with factory-installed versions on your Android phone and as soon as you connect to Wi-Fi during setup, the Play Store will begin updating apps in the background. And then it will freeze at completing the setup pop-up in the notification bar.

Until you get past it, you can’t download new apps or games on your Android phone. Let’s troubleshoot the issue.

If other connected devices are also facing the same problems, try to reset the router and connect your Android phone to a Wi-Fi connection again.

Also Read: Fix Android Connected To WiFi But No Internet (2021)

Whenever there is an app acting weird on an Android phone, you have an option to force stop the app from the app info menu. The concept is similar to Force quite on Mac and End Task from Task Manager on Windows. Here’s how to do it.

1. Find Google Play Store from the home screen or the app drawer menu.

2. Long-tap on the app icon and select the little info icon from the pop-up menu.

3. It will take you to the App info menu.

4. Tap on Force Stop and confirm your decision.

Long-press on the Google Play Store icon and open the app info menu. Tap on Disable and confirm your decision. Enable the app from the same menu and try completing the setup on your Android phone.

Do you face the Google Play Store completing setup issue after a few days of use? You can clear the collected cache by the app. Follow the steps below.

1. Long-press on the app icon and open the app info menu. Go to the Storage & cache menu.

2. Tap on Clear cache from the following menu.

This is yet another trick that can help fix Google Play Store stuck at completing setup errors. Here’s how to use it.

1. Find Google Play Store on your phone and long tap on it to open the app info menu and tap on Storage & cache.

2. Tap on Clear storage from the Play Store.

The next time you open the Play Store app, it may ask you to sign in again.

This is one of the prime reasons that may affect the Play Store functions on the Android phone. You need to give the Play Store unrestricted data usage access so that it can update apps and games even when the data saver mode is on.

1. Long-press on the Play Store icon and open the app info menu.

2. Tap on the three-dot menu at the top and Uninstall updates.

Google Play Store getting stuck at completing setup might spoil the brand-new Android experience for you. The steps above should fix the issues for you. Go through them and start using your Android phone as normal again.