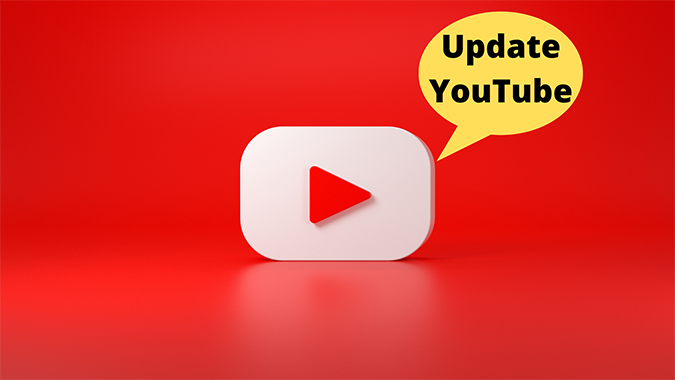 YouTube remains unrivaled in the video streaming space. While the service has never failed us in terms of reliability, one glaring issue may spoil your YouTube watching experience. We have seen the app keeps asking for updates on the home screen. If you are facing the same, here’s how you can fix YouTube asking for updates on Android and iPad.

There is a reason why YouTube keeps asking for updates on your Android phone and iPad. YouTube regularly releases updates with new features and bug fixes. Users aren’t keen to update apps from the Google Play Store or the App Store frequently.

That’s why we have apps like YouTube asking users to update the app. You can visit Google Play Store on Android or App Store on iPad and manually update the YouTube app.

If YouTube is still asking to update the app, then you need to apply the tricks below.

There can be times when you might have problems updating apps on Android. Instead of dealing with a cumbersome Play Store experience, you can grab the latest YouTube APK file from the web and install it on your phone.

However, don’t go with any random website to get the APK file. You might end up downloading bogus files on your phone. Instead, you should stick with reputed sources like APKMirror to grab an APK file.

You have successfully updated the YouTube app, but the asking for an update banner still isn’t going away for you. Chances are, Android is loading the YouTube app from the device cache. You can either force stop the app and terminate all the YouTube background processes from the background or clear the app cache and start again.

Let us show you how to force stop YouTube on Android.

1. Long press on the YouTube app icon and open the app info menu.

2. Tap on Force Stop and confirm your decision.

Try opening YouTube again and you shouldn’t notice the app asking for an Update Now banner in the app.

For the reasons stated above, we will try clearing cache from the YouTube Android app and try our luck again.

1. Long tap on the YouTube app icon and launch the app info menu.

2. Go to Storage and data menu.

3. Tap on Clear cache and you are good to go without any update banner in the YouTube Android app.

1. Open YouTube and tap on the profile picture at the top.

5. Go back to the Accounts menu, tap on Add account and select Google from the following menu.

The process is much simpler on the iPad.

1. Launch YouTube on iPad and select the profile icon at the top.

2. Tap on your name and select Use YouTube signed out option.

YouTube allows you to browse the service in Incognito mode as well. You won’t notice an Update banner in it.

Open YouTube and tap on the account picture at the top. Select Turn on Incognito option and enjoy YouTube in the private mode without an update banner.

If none of the solutions worked, you have no option but to delete the app and reinstall it from the store.

On Android, long-press on the YouTube app icon and open the app info menu. Disable the app from the following menu.

On iPhone, long tap on YouTube and select Remove YouTube. Tap on the Delete app and iPadOS will uninstall the app.

YouTube keeps asking for updates may leave you in confusion. You might have updated the app already and you may wonder the app is still asking to update. The steps above will help you troubleshoot the problem in no time.