How to Get rid of System Update Notification on Android 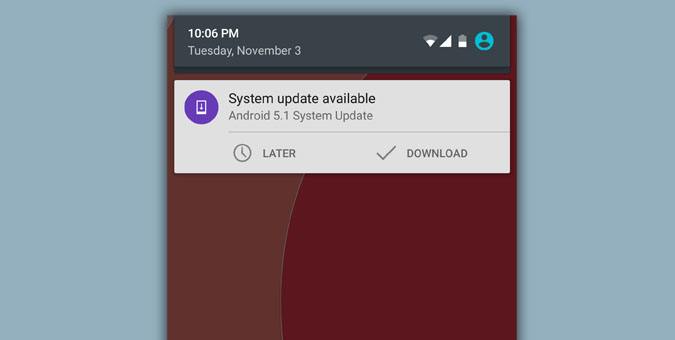 So I just bought a Nexus 6. And hey, since it’s a nexus device I rooted it the next day itself. Everything went smoothly for few days and then I got this notification — ‘Android 5.0.1 System Update Available'

Who will not update?

Now even though updates are always welcome, there are still few of us would who don’t want it (or delay it). For instance-

#1 You can not update software on a rooted device. First, you have to unroot it and then update the software and then root it once again (because Xposed framework)– now that’s a lot of work, Right.

#2 Or say, you are totally satisfied with the latest version and would like to wait before you update to the newer version.

#3 Another reason for not updating is — say if you have an old device then it won’t handle the latest OS well. For instance, my old nexus 7 tablet works better with KitKat than Lollipop.

Now, even if you decided to stick with the older version of Android, there is one problem — the update reminder notification won’t go away. And this looks irritating. So this is how you get it away.

Get rid of System Update Notification

But if the above solution do not work for you, then there is an alternate solution suggested by stack exchange user Andrew T.

That’s it. you will not see any system update notification. However, if you decided to update your version after few days, then go to settings > about phone > system update. Now you can install updates once again.