How to Get Water Out of Your Phone Speaker on Android 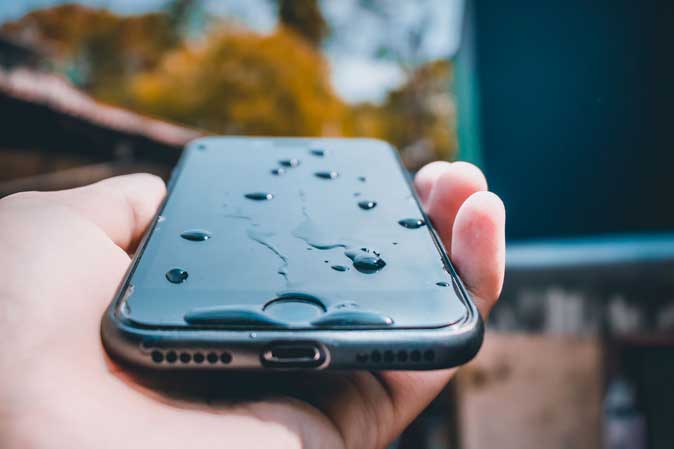 We’re clumsy people who keep spilling their drinks everywhere and sometimes on our phones. While you won’t think twice about the mishap if your phone is water-resistant, but water still gets into crevices such as the speaker grill and the charging port. If you’ve accidentally dropped your Android phone in water or spilled some liquid on it, there’s no reason to worry or hurry. Let’s see how to get water out of your Android phone’s speaker.

I have written a separate guide if you are looking to remove water from your iPhone speaker.

How to Eject Water From Phone Speaker

Most smartphones come with an ingress protection rating which is only given when a manufacturer makes the smartphone water-resistant. There are different categories to this rating that determine for how long your device can handle being submerged or getting splashed. However, if you’re Android smartphone doesn’t come with an official IP rating, there are chances that it may still have some water protection.

We’d discuss this more at the end but first, let’s talk about the solution to the problem. The easiest way to get water out of the phone speaker is by playing a specific sound frequency that pushes the water out of the speaker’s grills. However, you can’t just play any audio file and expect it to eject water.

The phone would start playing a tune from the speakers and if you look closely, you would see water coming out of the speaker grill. Repeat the sound until your phone speaker begins to sound normal.

Pro Tip: Make sure your phone is not connected to the Bluetooth speakers or earphones otherwise your phone speaker won’t blow out the water.

2. Use an App to Eject Water From Phone Speaker and Earpiece

As much as FixMySpeakers is functional, I wouldn’t want to enter a website every time I want to eject some water from the phone speaker. An app is a better choice and there are tons of those on the Play Store. I recommend Super Speaker Cleaner as it is free and has a simple interface with an intuitive checklist.

It shows the correct procedure to maximize results such as putting the phone face down while cleaning, maxing out the volume, etc. However, it is the only app that lets you run the water ejection sound for loudspeakers and earpieces separately. This feature is important because Android phones without stereo speakers can only play sound through loudspeakers and the earpiece is usually used only during calls.

Install the Super Speaker Cleaner app from Play Store. Open the app and select which speaker do you wish to clean first – loudspeaker or earpiece.

After that check the boxes and start the cleaning process. It has two modes that play different frequencies to ensure you get most of the water out. Repeat the process until your speakers start sounding normal.

How Do You Get Water Out of Your Phone Speaker?

The exact science behind getting the water out of your phone speaker is pretty simple. Sound waves propagate by vibrating particles. When there’s water in your Android phone’s speaker, it’s actually a miniscule amount that covers the membrane and obstructs it from operating normally. That’s why your phone speaker sounds muffled because it has a layer of water and to break the water layer into individual droplets, the speaker needs to vibrate so that it can literally shake the water off.

What if the Water Gets in the Charging Port?

Just like the speaker, all the openings are covered with a rubber gasket to prevent water from seeping inside the Android phone’s body. However, if the water gets in the charging port, your phone would prevent it from charging as it has built-in short detection. You can shake the phone against your palm to force some of the liquid out and use a blow dryer. Your phone should start charging after all the liquid is removed.

Does Putting Your Phone in Rice Actually Work?

Well, yes but actually no. Rice is not a good absorbing agent when stored at room temperature. If you put your phone in rice, the only thing you can be sure of is introducing starch and dust particles in your phone. However, when people claim that putting their phone in rice fixed it, it’s just water evaporating naturally.

My Phone Is Not IP Certified. Should I Be Worried?

There’s always a chance that water can get into your phone even if your phone has an IP rating. However, you should turn your phone off and leave it in a warm place. Whatever water has gotten inside, eventually evaporates out.

However, most modern manufacturers add some water resistance but don’t pay to get IP certification. So there’s a good chance that your phone is probably safe from a splash or a little dunk.

Final Words: Get Your Speaker Dried up

These were two quick ways to eject water from the phone speaker on your Android smartphone. Both work on a similar principle of pushing water out by rapidly vibrating the speaker membrane. This breaks the surface tension and pushes out the water droplets. What do you think? Did you encounter any problems with this method? Come talk to me on Twitter.

Also Read: Fix Android Connected to Wi-Fi But No Internet (2021)

How to Fix In-App Purchases Not Working on...