One of the most important features which the entire Android landscape lacks is an iMessage equivalent. Though we have third-party services like Whatsapp or Telegram, having such features natively as a default messaging app that can replace SMS/MMS makes much more sense. Google’s RCS program is exactly that and the better part is, you don’t need to just use Google Messages app for that, the messages apps from other OEM’s like Samsung, OnePlus, etc, also support RCS. Even the third-party messages apps on the Play Store will also be joining the RCS party slowly.

Gmail style smart replies are one of the features that you can obviously expect as it is a product from Google. It recommends replies, Gifs, Emojis according to your conversation. These are generated with on-device intelligence, so you don’t need to worry about privacy.

Smart suggestions are an entirely different thing that recommends things like location, contacts, calling, video calling,  recent photos, etc. For example, if someone asks “where are you?”, it will show a suggestion to share your location. If you have taken a screenshot or a photo of something, it will show a suggestion to attach a recent photo, so that you can add the photo easily. Anyhow, most suggestions are a two-step process, so you don’t need to worry about sharing location or a wrong photo by mistake.

If you are not fond of such features you can disable them by going to Messages settings > suggestions in chat > and disable both smart replies and suggested action toggles. 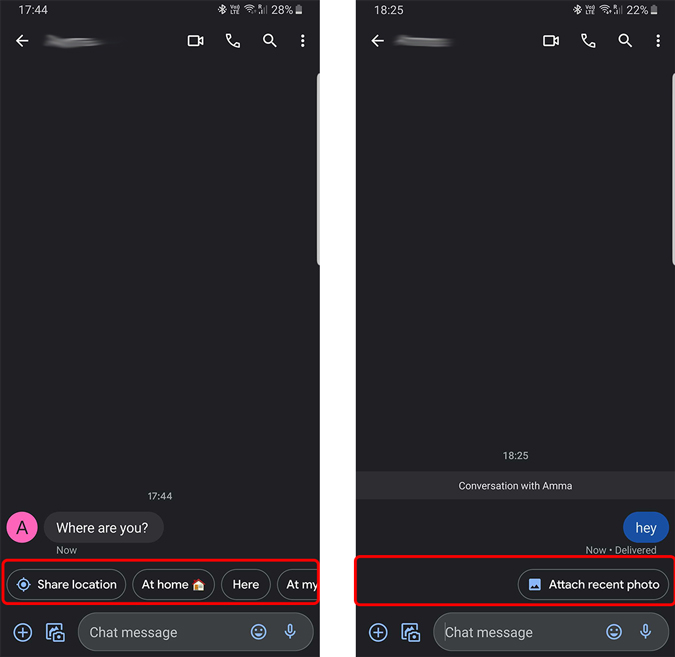 Another thing that Google really shows its smartness in Gmail is blocking spam. As expected, you can access the same feature on the Google Messages too. And the service is just as powerful as you expect from Google. To reduce spam, Google says that some info about your messages will be sent to Google without including the actual content or even your phone number.

But in case, if you want to disable it, you can turn off both spam protection and verified SMS features in the Google Messages settings.

3. know whether the person supports chat feature or not

As of now, everyone is not already on the RCS and it may take a good amount of time to spread over to all Android messaging apps and carriers across the globe. Also, RCS is not yet supported by iPhones, so you have to still rely on SMS and MMS services. But if you are using Google Messages, you can know, who have RCS enabled and who have not.

All you have do is check the text on the reply area. If it says ‘Chat messages’, then you are good to go and they are also using RCS, but if it says ‘Text messages’, means the person is still not on RCS, so you are sending an SMS message.

If you are texting people who are not on RCS, it obviously goes as an SMS message and costs you. But you can change these resend options in the settings > chat features > Resend messages if undelivered. By default, it will be on the resend as SMS/MMS when not roaming.

You can either change it to Always resend as SMS/MMS to send them the message irrespective of RCS or SMS. Or you can change it to Ask before resending to get a pop-up asking to send as SMS or not. 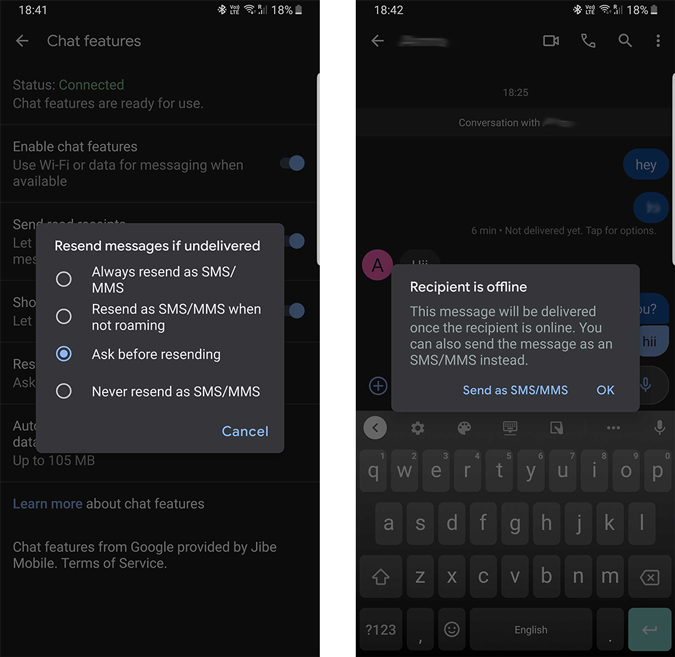 Ever since the launch of Google Allo, Google Assistant has slowly become one of the most important features of Android. With the Google Messages app, Google Assistant is always right at your fingertips. It will show assistant chips along with smart replies and suggestions. It brings actions from Google Photos, Maps, Weather, drive, etc. You can also find Google Assistant shortcuts by pressing the plus icon.

Anyhow, you can expand the support by opening Google Assistant and asking any questions. It will show you a chip saying send to the contact you are chatting with. You can simply tap on it and the details will send just like you expected. 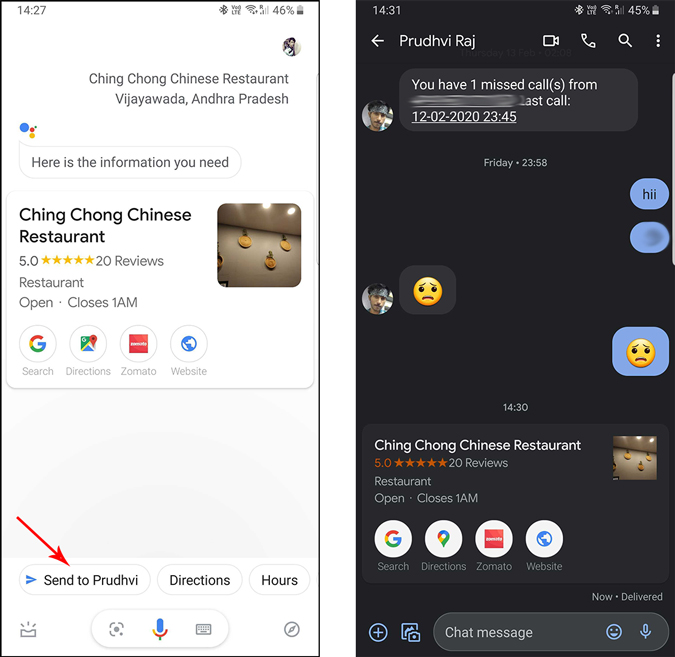 One of the features that RCS brought is transferring money through messages. Google messages have inbuild support for Google Pay. You can click on the plus sign to access the Google Pay shortcuts and enter the amount to pay.

As of now, Google Pay in Google Messages is only available in a few countries including the United States. But it’s just a matter of time for Google to release the feature in other countries.

When there is a search option in any Google Product, it will definitely provide a world-class experience for searching, Google Messages is no exception. You can search for all conversations, contacts, images, videos, places, links from the search button on the homepage of the app. You can enter the chat and start searching to search in the specific conversation.

You can use Google Messages from the desktop too with the help of messages for the web.  All you need to do is open the messages app on the phone > three-dot menu > messages for the web and it will open a QR code scanner. Open messages for web in the browser on the desktop and just scan the QR code with your phone. And that’s it. Now you can access Messages from that desktop every time. But do remember that your phone should be switched on stay connected to the same Wifi.

9. Integration with the Phone app and Duo

Slowly a few other apps like OnePlus Messages are also adapting to the integration with Duo.

One thing I liked about iMessage is that it seamlessly integrated SMS and chat messages in a single app. In case you’re in a place without a proper internet connection iMessages still delivers your message, as an SMS. RCS also does this and you will be sending an SMS message when the chat message fails to deliver.

One cool feature which I haven’t found on many chat applications is built in the remainder app. When you are on the homepage of Google Messages app, you can long-press and select any conversation. Now just tap on the timer option on the top and you can set a reminder like 1 hour later, today night, tomorrow, or some custom date and time to take a look later. 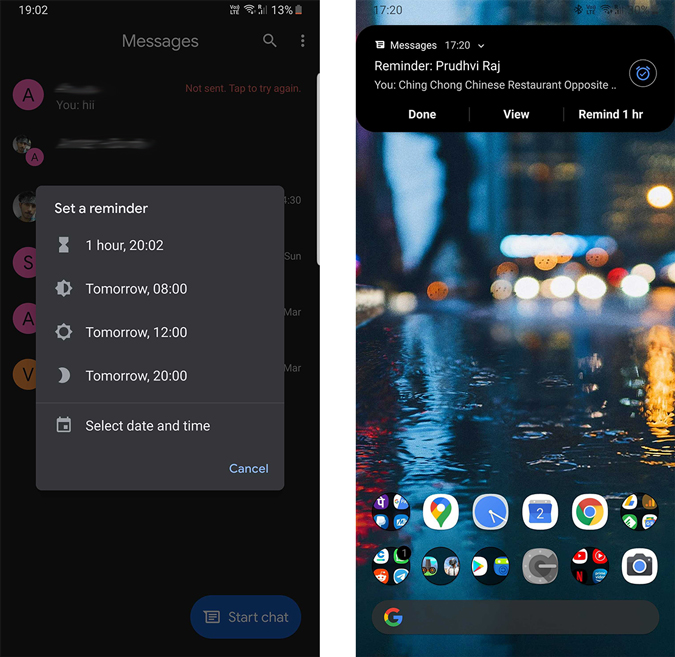 RCS messages take advantage of the internet and make default messaging apps on Android much more powerful. But most people in many parts of the world has been already shifted to Whatsapp, Telegram, etc. Though Google Messages is already much more feature-packed than Whatsapp, are features like smart replies and inbuild Google Pay are deal-breaker for you. What do you think? Let me know in the comments below.

Interested in Consumer Technology in any form factor. Lives on the Google side of the world. Twitterati. Addicted to movies with no language and regional barriers. You can always ping me on Twitter about Tech and Movies.