Honor Band 4 and Mi Band 3 are the two most popular budget smart band right now. Since both of them have the same set of features like heart rate sensing, sleep tracking, smart notifications, it does create a lot of confusion. However, they have their own set of differences. I have been using both the Mi Band 3 and Honor Band 4 for almost a month now and it’s time that I draft everything out in this article.

We will be comparing them on parameters such as Display, Features & Accuracy, Smartphone app, Third-party app integration, etc. So here is my detailed comparison of the Honor Band 4 and the Mi Band 3 or let me rephrase it in the fancy YouTube way – “Honor Band 4 versus Mi Band 3”.

Below are the specifications of both the smart bands’ side by side. Obviously, the Honor Band 4 has better specs but specs are often found to be misleading. So, now when we have the specs out of the way, let’s move forward to some real testing.

Ideally, both bands look almost similar. They are built around the same slim fitness-tracker profile. So, if you like the design of either of the band, you will surely love the other one. The Mi Band 3 is sold with a black band which gives it a stealth look. Whereas, the Honor Band 4 comes in 3 different colors: Black, Blue, and Pink. Color shouldn’t be a big deal as you can always order various colored straps for both from Aliexpress which cost as low as $1 or 70 INR. 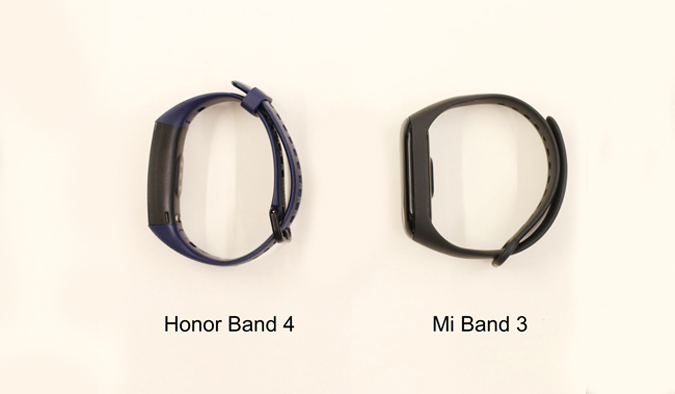 Both fitness bands are extremely light-weight and I had no problem wearing them around at any point in time. Both of them have a soft silicone strap and cause no irritation to the skin. For most parts, it is hard to identify that you are wearing a smart band which is the best part of the entire experience. I have been using it while playing football, morning run and during my daily commute. Zero hinderance with the daily chores.

A little nitpicking would be on the Honor Band side. The band has a small hoop to tuck in the strap which at times presses against my hand while I type on my keyboard. If you are someone who spends their day entirely on a laptop or PC, you should take note of this bit.

Coming down to the display, for me, this is one of the important parts of a smart band. The display is the only way of interacting with the band. If it’s not good enough, it definitely is a deal breaker. Having used the Mi Band 2 extensively, the only complaint I had was the display. It was practically unusable outdoors. While they have made changes to the display on the Mi Band 3. It has gotten bigger and the resolution has been bumped up to twice that of Mi Band 2 but it still has its own problems.

The display is kind of unusable outdoors. Have a look at the below image, this is how it looks compared to the Honor Band 4 under direct sunlight. 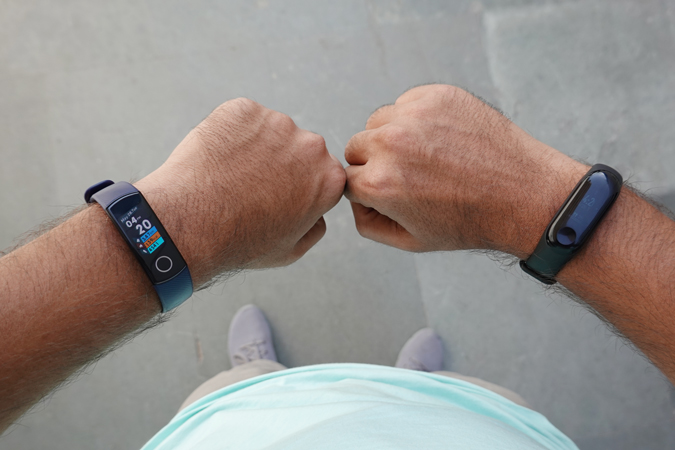 This might be a deal breaker for some. Say, you want to use the band to track your on-field activity or running stats. It’s hard to view the display under those scenarios. Now, agreed that you won’t be using the band a lot outdoors under the scorching sunlight. There might be some of you who are mostly into indoor exercises or for that matter an indoor gym. This won’t be much of a deal to those folks. But to the outdoor ones, this could be a deal breaker.

Honor Band 4 has a far better display than the Mi Band 3.

The Honor Band 4 has a colorful 0.95 inch AMOLED touch screen. The display is bright, vibrant, colorful and has 3 Brightness levels. You can also get to keep it on “Auto-Brightness” which will lower the brightness based on time. Now, when you keep it besides the Mi Band 3, it just crushes it. The touch is much more fluid, sunlight legibility is better. The Honor Band 4 has even sub-menus and you can control everything from Settings to Sports Activities from the Band itself. 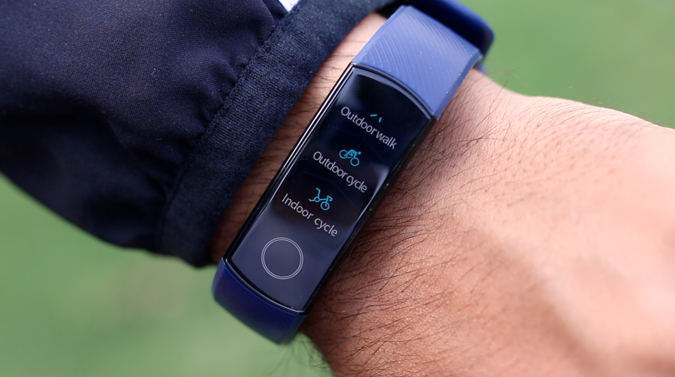 Talking about the Battery life, this is where the Xiaomi Mi Band 3 excels. The standby time is 20 days and with normal usage, it does last 20 days. The Black and white OLED display does help the Mi Band to save on battery. This is a good thing as you generally wouldn’t want to plug your fitness band for charging. On the other hand, the Honor Band 4 due to the colorful display rates comparatively lower on battery life.

The Honor Band 4 has a standby time of 15 days but with all monitoring on, it gets exhausted in a week. If you switch off the scientific sleep tracking, you could still pull off 10-12 days on a full charge. But, that would be cutting down on the features. One thing which is great about Honor Band 4 is the charging time. It gets charged from 0 to 100 in about a couple of hours whereas the Mi Band 3 takes around 3 hours.

Both of them have their own proprietary charger; sadly no USB charging. So, you better take care of the charger in the box. 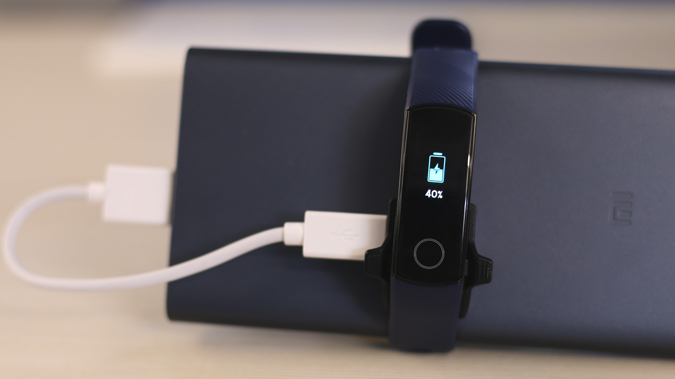 The main function of the smart band is to track your physical activity. Rest of the deal is how good they are at displaying it which is more of dependent on the Mobile apps. We will leave the mobile app functionality and talk about the in-band features. Both the bands have a heart rate sensor but the Honor Band is slightly faster. However, both of them are fairly accurate. I put them against the Apple Watch 3 and the data seems to be mostly accurate.

Other features include step counting, distance tracking, sleep measurement, etc.  The Honor Band 4 claims to have scientific sleep tracking and it is the USP of their band. You need to enable it in the Health app and isn’t enabled by default. This will also cause a huge drain in battery life. Now, the Honor Band 4 automatically detects when you are asleep and combines continuous heart rate tracking to determine your breathing and activity. The sleep chart is well-laid out with fairly precise data. It gives you light & deep sleep time, REM period, awake time, etc.

It accurately detects your awake time and movement. With all this data, it gives your sleep points and suggestions. This quality of sleep tracking and data analysis is something which you get in the higher variant of smartwatches. 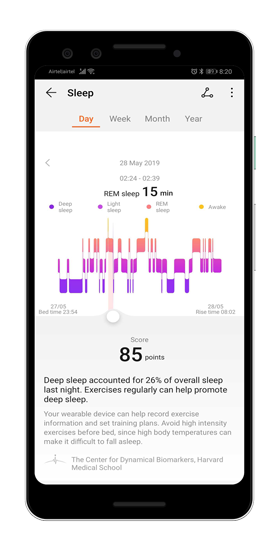 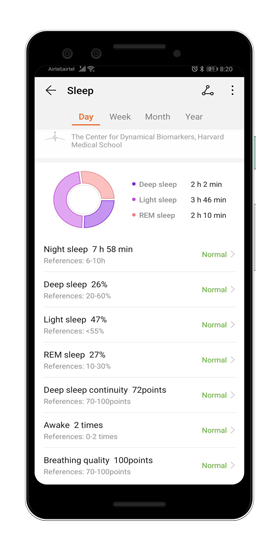 Talking about the accuracy, I took a stroll of 300m around my office counting my step and distance. I could manage 400 steps with a decent stride. The Honor Band 4 was almost accurate in measuring this and took the count to 411 steps whereas the Mi Band 3 underestimated the step count to just 133 steps. Part of the reason is the 6-axis gyroscope in the Honor Band 4 which accurately detects your step count while the 3-axis accelerometer in the Mi Band 3 does an average job.

But here’s the main part, you need the Mi-Fit mobile app to start a walking or running activity for the Mi Band 3. Whereas the Honor Band 4 has numerous activity like Indoor walking and Outdoor walking built into it to start an activity.

Honor Band 4 is more accurate and has significantly better sleep tracking due to superior hardware.

Here is the part which makes your fitness band a smart band. The mobile app bridges the gap between your smartphone and band to make it a smart band. Basically, you can pull off data from your band and view it in the app. For the Xiaomi Mi Band 3, you have the Mi-Fit app and for the Honor Band 4, you have the Huawei Health app. Comparing both the app, the Mi-Fit app looks more polished. Xiaomi has been good with their software.

The chart & data look well laid out in the Mi-Fit app. The exercises are way more categorized in the app compared to Huawei Health. The best thing about the Mi-Fit app is the socializing part. You can register your friends in the app who have a Mi Band. Later, you can compete or set goals together. Apart from all of these, every feature you can think of is present in both the apps. You have display customization for the band, weather settings, third-party notification customization, etc. 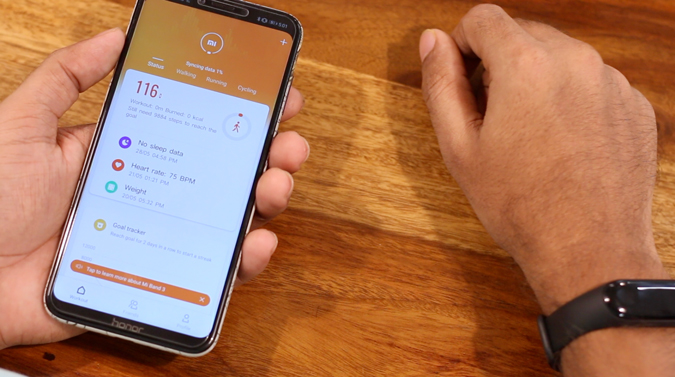 While none of the articles have covered this parameter but if you are talking about Xiaomi, you cannot ignore the huge fan-base. Owing to that, you have a huge number of third-party apps for the Mi Band 3 which provides it extra functionalities. You can use your Mi Band 3 to unlock your device, control music playback, click photos, etc. We have a whole article on how to use Mi Band 3 with third-party apps.

You can also control use your Mi Band 3 to control music on your Android or unlock Windows PC. Hacks like these are not possible with Honor Band 4. 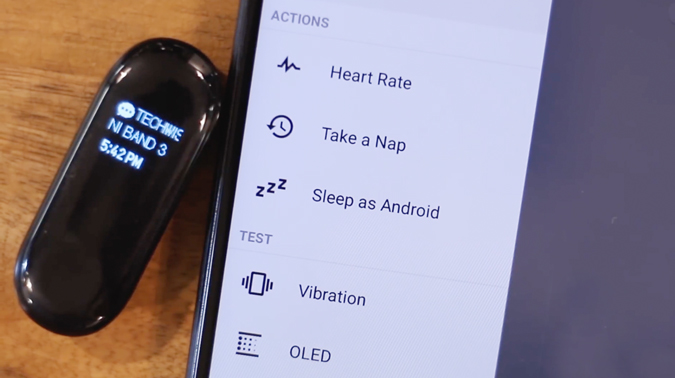 The competition between both the smart bands has been neck to neck. The only deciding factor is the display. If you can shell out that extra money, I would recommend the Honor Band 4. In case you have a strict budget of $29, Mi Band is the right choice.

Honor Band 4 is a better deal if you can shell out that extra money. Mi Band 3 is priced lower and makes sense if you have a strict budget.