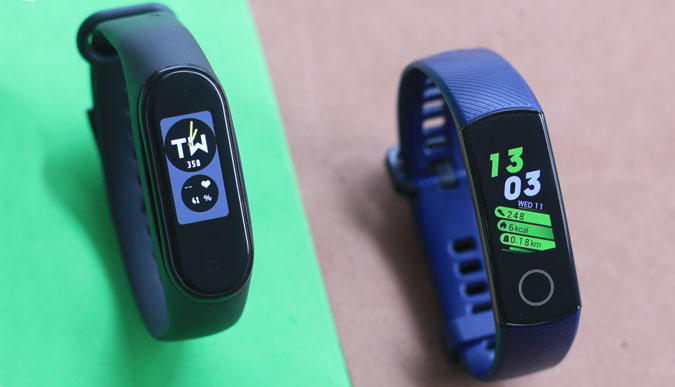 Mi Band 4 saw a huge upgrade over its predecessor in terms of display, activity tracking, and hardware. On the other hand, Honor Band 5 had absolutely zero upgrades over the Honor Band 4 barring the SpO2 sensor. Being the most popular fitness bands in their segment, the most obvious question is “Should you get the Honor Band 5 or the Mi Band 4?”. Well, I have tested both of them for a couple of weeks and I have an answer. Here’s my quick take on the differences between Honor Band 5 and Mi Band 4 and which one should you choose.

1. Both have similar Displays

There is hardly anything to distinguish between the Mi Band 4 and Honor Band 5 in terms of display. The case was similar with the Honor Band 4 and the Mi Band 4 as well. Both of them are at deadlocks with the same 0.95 inches colorful AMOLED display. They do get equally bright and have great sunlight legibility. The deep blacks ensure that the colors pop out and make the display seem vibrant. 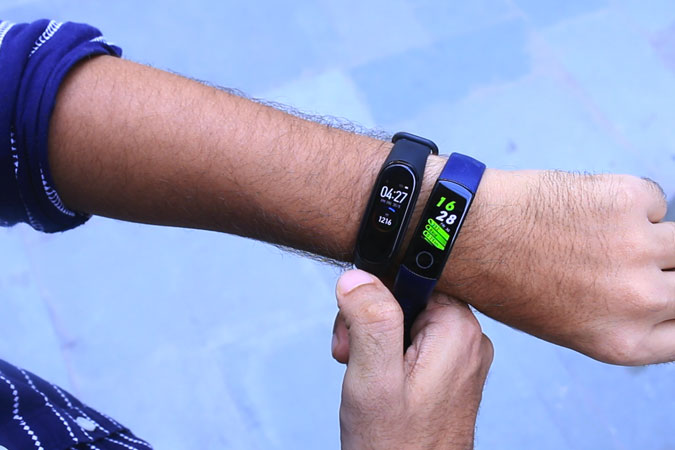 Xiaomi added new fitness activities like swimming, exercise to the Mi Band 4 which took the total activity count to six. On the other hand, Honor Band 5 comes with 10 built-in activities such as Outdoor Running, Walking, Swimming, Elliptical, Rowing, etc. Honor Band has an upper hand if we quantify the fitness activities but in terms of real-life usage, it doesn’t really make much of a difference. 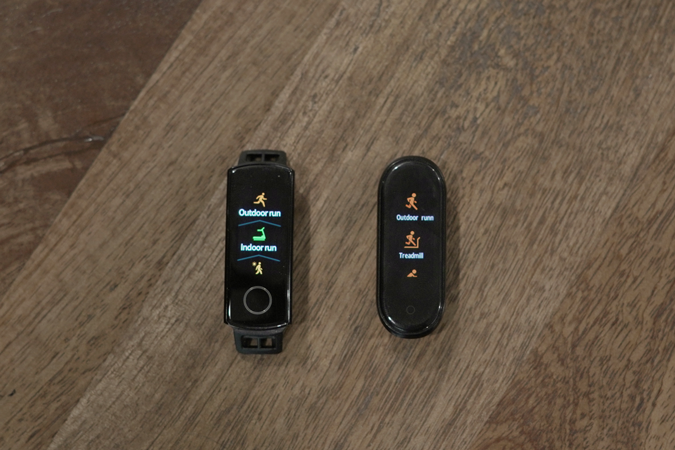 3. Both have remote music controls.

Recently, Huawei added remote music playback controls to the Honor Band 5. Now, Mi Band 4 had the same functionality since the launch. Anyways, both of them let you play/pause, skip the music track. You also get a volume toggle which comes in handy if your earphones don’t have one. I have tested it thoroughly with all the music streaming services like Spotify, Pandora, YT Music, etc and they work seamlessly.

The only problem that I noticed was the slow responsiveness of the menu on the Honor Band 5. But it is something that can be fixed in future software updates. The only differentiating factor is the 5 min “Screen on” feature on the Honor Band 5 which enables the music controls to stay lit for a longer time.

The Indian variant has also receieved the spO2 functionality with this update. 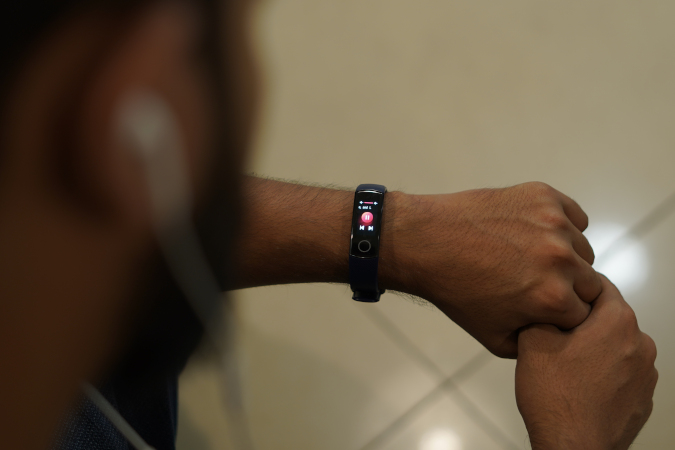 4. Honor Band 5 is accurate and consistent

While no fitness band is cent percent accurate in activity tracking and these two aren’t any exceptions. But, it really helps if your fitness band is consistent and reliable. I am more into long-distance & trail running and I want my band to be consistent if not accurate. And this is my complaint with the Mi Band 4, it’s not reliable. There have been times when the band dozes off during the run or literally goes haywire and shows highly inaccurate data.

In the case of Honor Band 5, it tends to get slightly overwhelming with the step count and distance measurement but it’s consistent nonetheless. It inspires confidence in me that I can take the band out with me and it will show consistent results. Spoilers, I would any day choose Honor Band 5 over the Mi Band 4 due to this particular reason.

Similar to its predecessor, the Honor Band 5 has great sleep tracking. Whereas the Mi Band 4 has gotten accurate over the time and the readings are on par with the Honor Band 5. But, the insights Honor Band 5 provides is far better. It displays the time for your Deep sleep, Light sleep, Breathing points, etc along with sleeping tips. However, you need to take these statistics with a grain of salt as they might not be 100% accurate. Nonetheless, they still give you a brief insight into how well you sleep.

On a related note, you can also use Sleep as Android with your Mi band 4 to get detail sleep analyses like Honor band 5. 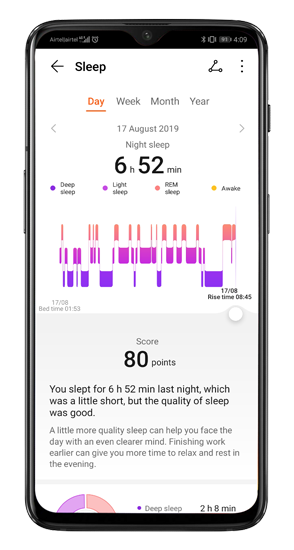 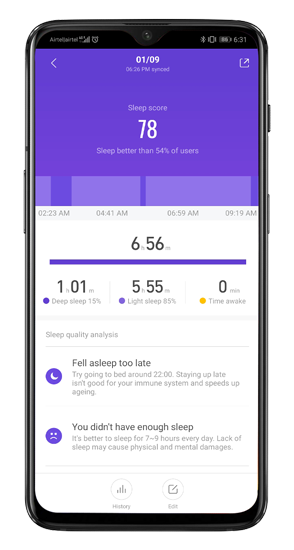 Mi Band 4 has a significantly larger 135 mAh battery compared to the 100 mAh battery on the Honor Band 5. And this difference does reflect in real-life usage. The Honor Band 5 lasts around a week with TruSleep tracking and 1 workout a day whereas with the same load Mi Band 4 can go about 12-13 days.

7. Mi Band 4 has a lot of third-party app support

This is the only region where the Mi Band really trumps the Honor Band. Just like the previous iterations of the Mi Band, Mi Band 4 also has huge third-party app support. You can get your Mi Band to control music, click pictures and even control mobile automation with the help of Tasker. The app I have used most with the Mi Band 4 is “Sleep as Android” which really takes the sleep tracking and smart alarm to another level. To know more about these tips and tricks, read our dedicated article on Best Mi Band Apps, tips and tricks.

On the other hand, Honor never released APIs or the firmware of the band for third-party app developers to build on it. There is no third-party app or utility that works alongside the Honor Band 5. So, you are only stuck with the Huawei Health app to deal with the band. 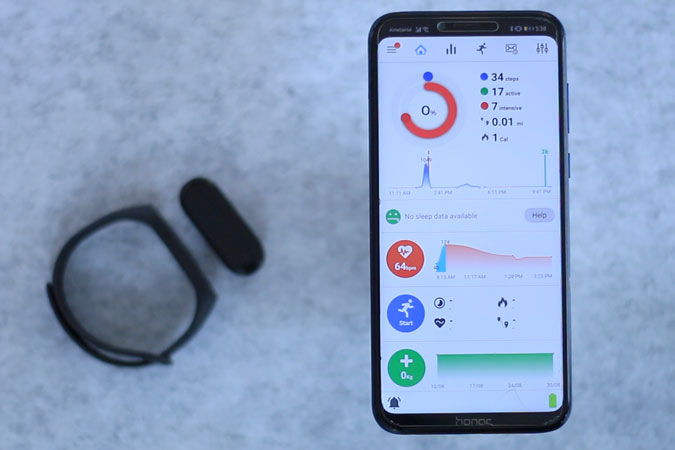 If I had to choose personally I would go with the Honor Band 5 or even the Honor Band 4 due to consistency and reliability. But, if you are someone who tinkers around a lot with the devices, Mi Band 4 would be much intriguing to you.

For any queries or issues regarding the Mi Band 4 or the Honor Band 5, let me know in the comments below.

Also Read:  Strava vs. Endomondo: Which Fitness App Should You Use