How Many Cores Does My CPU Have? A Guide For All OS

The CPU is the main unit of your computer whether you are using a Mac or an Android. It does all the heavy lifting when you are gaming or just browsing. If your system has more cores, it means it can handle more processes at the same time. This will improve the performance of your computer significantly. Knowing the number of cores inside your computer or mobile will help you understand and compare performance across different devices and hardware.

So, how do we know the number of cores inside Windows, Mac, Android or iOS devices? Each of this platform has a different way and we will be discussing all of them below. Pick your operating system and test it on your device now.

1. Find the Number of Cores in Windows CPU

If you are using a Windows computer then there are quite a few ways to know the number of cores running inside your CPU unit. Let’s take a look at a few of them. 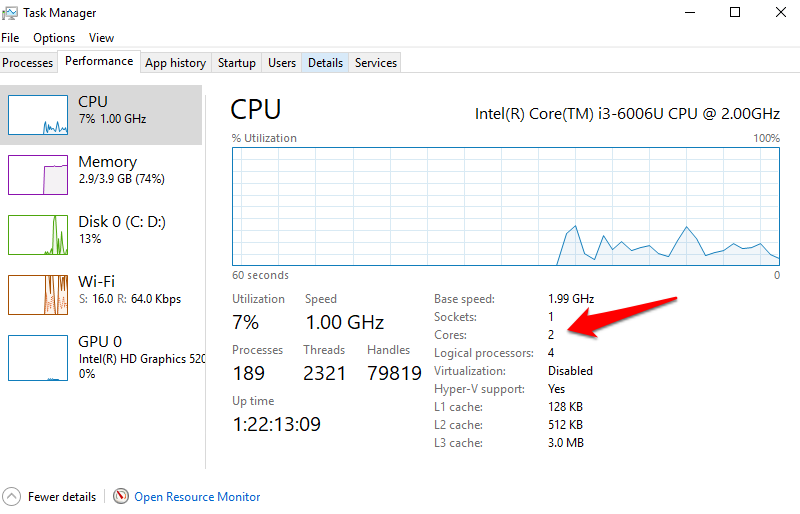 Note the number of sockets which is usually only 1 in commercial computers meant for home users. If you have more than one socket, you can install another CPU converting your unit into a server. As you can see, my old Lenovo laptop has 2 cores with 1 socket.

Another and a much better way to find out the number of cores inside your CPU is a software. Download and install CPU-Z software. It is a freeware and comes with no ads. With CPU-Z, you will also discover the number of threads the cores employs, core speed, and so much more. 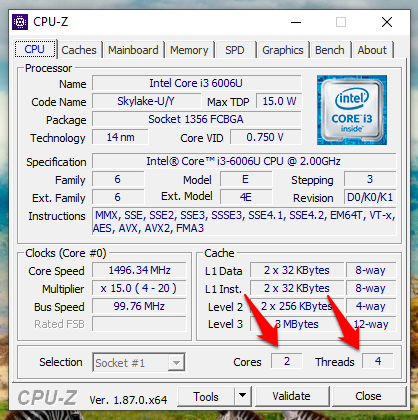 It is an advanced tool that must sit on every hard drive in the world. It is that good and the software is really lite with a small footprint in terms of resources.

To find the number of cores on your Windows computer using the command line, simply open cmd and type in the following command.

2. Find the Number of Cores in Mac CPU

If you are using a MacBook, then you will need different software or apps to learn about the number of cores that power your laptops. I don’t know why Windows users call their laptops just laptops but Apple users don’t. They call it MacBook. Isn’t it the same? Too much branding? Anyways.

To find the number of cores running inside your MacBook, simply click on the ever-present Apple logo on the upper left corner of the screen. Once you do, you will see the option ‘About This Mac‘. Click on that to reveal a popup. Go to the Support tab and click on Specifications. Apple will redirect you to a web page on their site instead of displaying the info on your screen. In my case, I was redirected to this link for model MacBook Pro 13′ 2016 year. 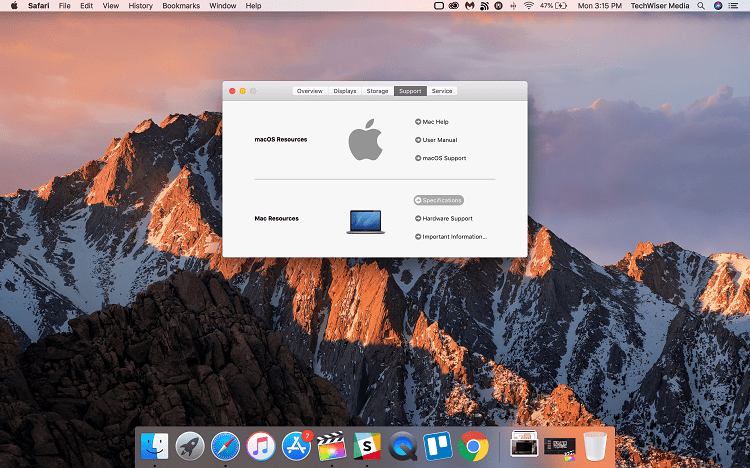 Apple always did things their way and this time is no different, however, this doesn’t paint the complete picture. If you are looking for more in-depth information, press the Option key and go to Apple Menu > System Information. You can also use the Spotlight to find System Information. This is where you will see more info like the number of cores running, CPU, RAM, and so on. 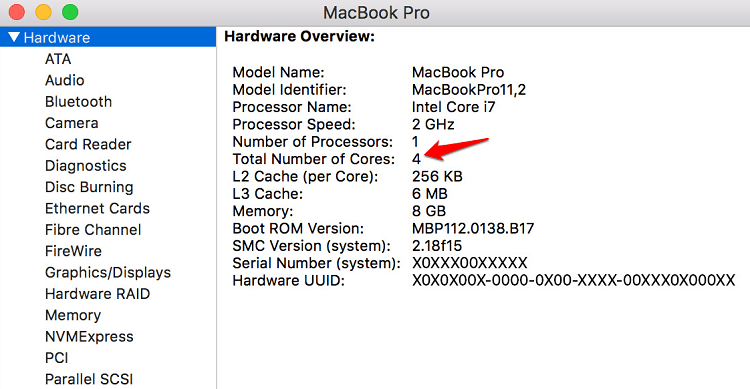 It is good to see that such a tool is built right inside MacBook removing the need to download third-party software. Microsoft, take note.

Alternatively, you can type in the following command to quickly find the number of cores on your MacBook. 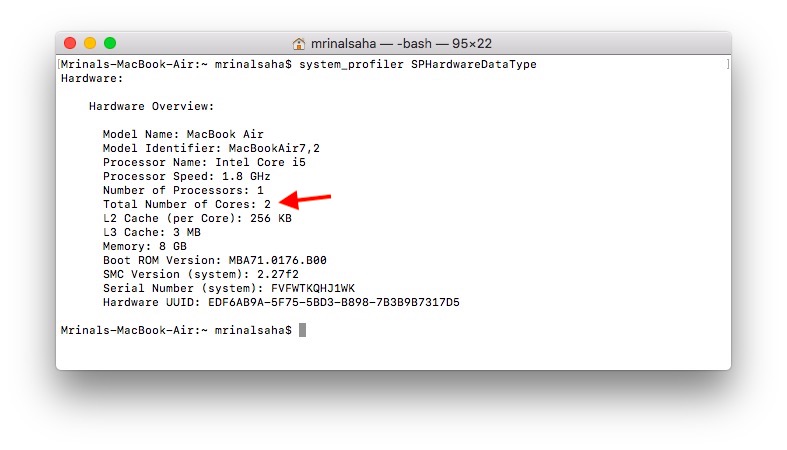 3. Find the Number of Cores in Android CPU

Today’s smartphones are really powerful. To give you some perspective of the same, let me share an amazing fact. Nasa once shared that Voyager 1 and 2, that were launched way back in the year 1977 to study our Solar System, had just 69.63 kilobytes of memory each. iPhone 5 came with 16GB memory which is 240,000 times more than that. iPhone 5 is now considered to be a vintage device. Pretty much dead. Question is, what are we doing with that much power in our pockets? Playing games and browsing social media? Just some thought for food. 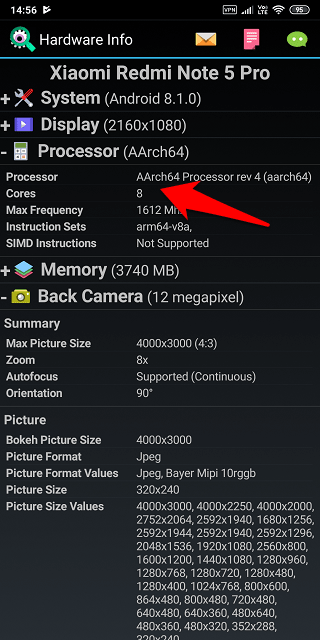 The first app in the list is Hardware Info. As the name suggests, this nifty little app will collect all the information about what’s underneath your Android smartphone. Apart from the number of cores that are powering your smartphone, you will also learn a thing or two about display, processor, RAM, cameras, and sensors. A lot of useful information on a single screen neatly organized in expandable tabs. The app has no ads but comes with an in-app purchase that will let you compare hardware info of over 3500 Android smartphones. 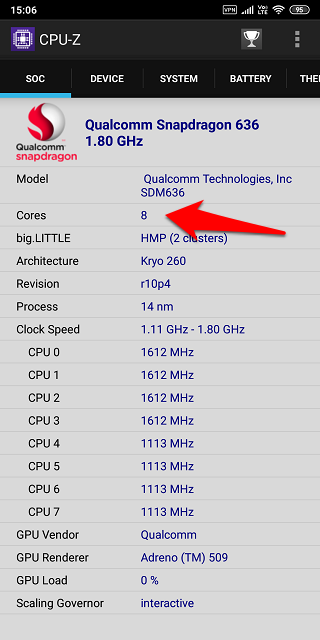 The second app is CPU-Z. Yes, it is from the same dev team who developed the software for the Windows OS that we discussed above. The layout is more refined and pleasant-looking but no dark theme here. CPU-Z will collect and display some additional information like individual core speed and performance as well. This way, you can understand the processor speed and make a better choice next time you are buying a smartphone.

Read: Best Android Quick Settings Apps to Customize It Like a Pro

4. Find the Number of Cores in iOS CPU

iPhones are considered to be a premium lineup of smartphones and for good reason too. They look great, work smooth, and have an amazing shelf life. Most people never face issues like iPhone slowing down or needing reboots to function correctly or simply hanging down on users. If you are interested in knowing about the number of cores running inside your iPhone, download and install the Lirum app from the App Store. 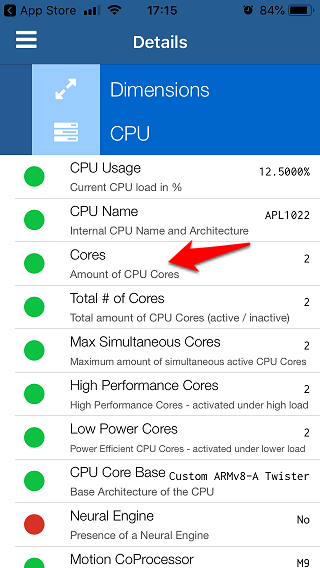 Tap on the menu on the right to select This Device under which you will tap on CPU. This will reveal a drop-down menu that will share some critical information about your iPhone. In my case, the number of cores running on iPhone SE is 2. Yeah, I am still rocking the SE that runs iOS 12. Didn’t I say that Apple products have an amazing shelf life?

The lite version of the app is free to download and use and there is no need to upgrade to the pro version. If you are an advanced user and need more advanced features like the ability to compare device info and performance then the pro version will cost you $3.49 only.

Also Read: iPhone Not Sending Text Messages? Here are 12 Ways to Fix It

How Many Cores Does My Device Have

These were some of the best apps and software to find the number of cores powering your hardware. Whether you are using an Android, iOS, Windows or MacOS powered device, there is a way to find the core nature of your device.