Home » iOS » How to Add Distance Apart Widget on iPhone 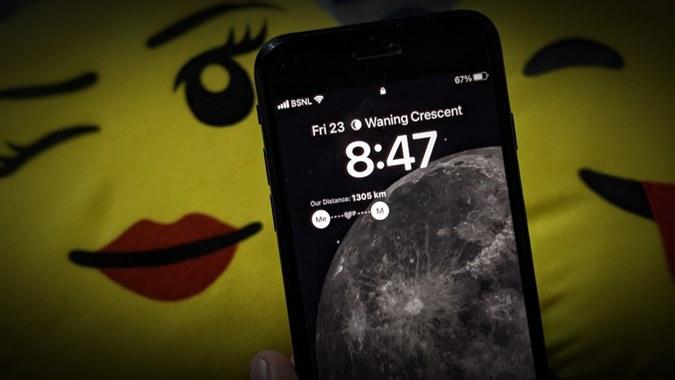 iOS 16 allows users to add widgets to iPhone’s lock screen. You can either use the native widgets from Apple or download interesting widgets using third-party apps. One widget that has become quite popular these days is the distance apart widget. If you have been wondering how to put the distance apart widget on your iPhone’s lock screen, you are at the right place. Let’s get started.

The distance apart widget shows the real-time distance between you and the other person on each other’s iPhone lock screen. The other person can be your friend, significant other, or your kid. With this widget, you can track how far you are from each other.

Here are the steps to add the distance widget on the lock screen in iOS 16.

1. Install the Widgetable: Lock Screen Widget app on your iPhone from App Store. Search for the full name in the App Store to find the app easily. The app has a green logo as shown in the screenshot below.

2. Open the Widgetable app and tap on the Lock Screen.

3. Scroll down and tap on the Distance widget.

Note: While setting up the widget, you might see the “Allow Widgetable to use location” pop-up. Tap on Allow while using app. If you don’t see it or the widget doesn’t work after completing all the steps, go to Settings on your iPhone followed by Widgetable. Tap on Location and select Allow while using the App or widgets or Always allow.

4. Here you need to select the person whose real-time distance you want to show in a widget on your iPhone’s lock screen. Tap on Select. Then, tap on Add a new friend to add your friend in the Widgetable app.

5. Now, copy the code that shows up on the screen and send it to the other person.

Tip: Tap on the Pencil (Edit) icon next to the User label to change your nickname.

6. Also, ask the other person to install the Widgetable app on their iPhone. Please tell them to type the app’s full name in the App Store. Once they install it, tell them to follow steps 2-4 mentioned above. That is, go to Lock Screen > Distance widget > Select > Add a new friend.

7. Ask them to copy-paste the code that shows up on their screen and send it to you.

9. Now, go back to the previous screen where you can see the Distance widget and tap on Select under the Select a friend section and choose the friend that you added. Also, ask your friend to select you as a friend in the Widgetable app on their own iPhone.

Note: It’s necessary that both you and your friend select each other as friends in this step and also add the widget to the lock screen on both phones.

10. Once both of you have selected each other, tap on the Save button.

11. Now, you need to add the distance widget to your lock screen. For that, open the Notification panel on your iPhone by swiping down from the top edge of the screen. Touch and hold any empty space to enter the lock screen customization mode.

Tip: You may also go to Settings on your iPhone followed by Wallpaper. Tap on the Customize button under the Lock screen preview to customize the lock screen.

12. Tap on the Customize button under the current lock screen and hit Add widgets on the next screen.

13. Scroll down in the list of widgets and tap on Widgetable.

15. Then, tap on the empty widget that says Click to edit in the widget area at the top and select the Distance widget from the list.

16. That’s it. Wait for a few seconds and the distance widget will now start showing the real-time distance between you and your friend. Tap anywhere on the lock screen and hit the Done button to save the changes.

Tip: Learn how to fix the blurry lock screen or home screen wallpaper on iPhone.

The Widgetable app allows you to create some other cool widgets like miss you and mood status. Similar to the distance widget, both these widgets work in real-time and must be added to the lock screen on both iPhones. The miss you widget keeps track of the number of times that a person presses the miss you button whereas the status widget allows you to set a mood status that will directly show on the other person’s lock screen.

That’s how you add the distance widget to the lock screen on your iPhone. Check out other cool widgets to customize your iPhone. Also, learn how to show battery percentage on the iPhone lock screen.